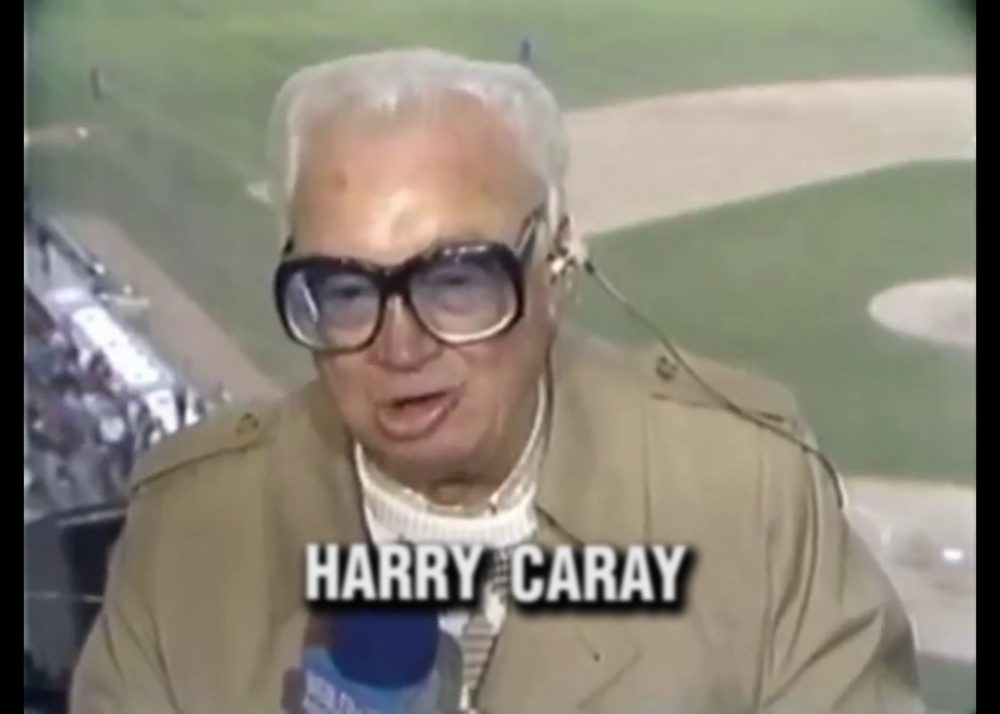 Some teams go beyond TMOTTB for the stretch, however. To classify them, I determined what music, if any, teams routinely play along with TMOTTB. By “routinely” I mean every home game, not just on occasion, or playing “God Bless America” on Sundays. I found there are, roughly, four classifications of seventh-inning stretch music. (Note: I feel pretty confident somebody’s going to tell me some of these are wrong. In my defense, every entry here is based on an interaction, either over the phone or via e-mail, that I had with a club representative. So if some of these are wrong, blame the team personnel.)

Old School. A slight majority of MLB teams—16—play nothing but TMOTTB. They may play it twice. They may play other music on a rotating or random schedule. But the only song they consistently play, game after game, is TMOTTB. The 16 traditionalists are the A’s, Angels, Cardinals, Cubs, Diamondbacks, Dodgers, Giants, Marlins, Nationals, Padres, Phillies, Pirates, Rays, Royals, White Sox, and Tigers. (Actually, there are 17 teams. More on this later.)

Commentary: The Cardinals play “Here Comes the King” (“the Budweiser song”) every game, but it’s at the end of the seventh, not the middle, and it’s used to warn patrons of the impending end of beer sales, not to stretch. The Angels used to play “Build Me Up Buttercup” by the Foundations. I guess I can see the argument that a song whose opening stanza is “Why do you build me up, Buttercup, baby/Just to let me down and mess me around” may not be the most inspiring lyrics for the home team, but it’s a good song:

The Patriots. The Indians and Yankees play “God Bless America.” Not just on Sundays. Every home game.

Commentary: As you probably know, there are two versions of “God Bless America”—sung by Kate Smith, and everything else.

Local Flavor. I think these are fun. Some teams play songs that are unique to their locale. Let’s handle them one at a time.

Rangers: “Deep in the Heart of Texas.” People talk about San Antonio as a possible expansion site. If San Antonio gets a team, I have a prediction about what song they will play during the seventh-inning stretch along with TMOTTB.

Blue Jays: “Okay Blue Jays.” This is the most Canadian thing in baseball now that there aren’t Expos fans singing “The Happy Wanderer” anymore. “Okay Blue Jays” is a peppy, upbeat team song that’s accompanied by a sort of calisthenics-inspired dance. I’m serious. I’ve been to Rogers Centre; I’ve seen it. OK, most people don’t do the calisthenics, but you really should see it. Unfortunately, you’re not going to see it in this video, but you can see the lyrics:

You can’t really hear the music in this one, but you can see the moves, as personnel from a Hamilton, Ontario C&W station learn them in what appears to be a warehouse:

Canadians, man. It almost feels like they do this stuff in part to troll us boorish Americans. Yet they do it so adorably.

Mariners: “Louie Louie,” The Kingsmen. Why “Louie Louie”? Because it has a strong Washington connection, even though it was written by a musician from Los Angeles and its most famous performances were by two Portland bands, The Kingsmen and Paul Revere and the Raiders. There was a proposal to make it the Washington state song in 1985. Here it is performed by the Seattle band The Wailers:

“Louie Louie” has a reputation for lyrics that are dirty, dirty. Sorry, it’s not true.

Reds: “Cincinnati, Ohio,” Connie Smith. I’m going into this with the assumption that most of you are familiar with rock & roll standards like “Louie Louie” but not so much the world of country western. Smith is a big star of the genre. Born in West Virginia, she grew up in Dungannon, Ohio, about 200 miles east of Cincinnati. Her song “Cincinnati, Ohio”—the only seventh-inning stretch song with the home team’s city in the title!—was nominated for the Best Country & Western Solo Vocal Performance, Female Grammy in 1968. Here’s Smith performing it in 1967:

Braves: “Chicken Fried,” Zac Brown Band. The Braves began using this song when they moved to SunTrust Park last year. Like Smith, you won’t know the Atlanta-based band if you don’t know country, but they won the Country Music Association award for new artist of the year in 2010, Academy of Country Music award for Vocal Group of the year in 2012, and three Grammies—Best New Artist in 2010, Best Country Collaboration in 2011, and Best Country Album in 2013.

Brewers: “Roll Out the Barrel.” The actual name is “Beer Barrel Polka,” and it was written in 1927 by a Czech musician, with Czech lyrics added in 1934. The translated title was “Wasted Love.” The familiar English lyrics, which don’t discuss love, wasted or otherwise, were written in 1939. So it’s an international song, not a local one, but the tie-in to the Brewers is pretty obvious.

You already know the lyrics, right? So here’s the Czech version, “Škoda Lásky.” We’re all about broadening your horizons here. Sorry if it gets you thinking about wasted love.

Twins: “24K Magic,” Bruno Mars. Yes, in the birthplace of Prince and Bob Dylan, they play a song by a Hawaiian during the seventh-inning stretch.

Orioles: “Thank God I’m a Country Boy,” John Denver. Look, nothing against Denver, who was a really talented musician, but what the hell? Baseball teams play in the largest cities in the U.S. C-I-T-I-E-S. What relevance does “I pull out my fiddle and I rosin up the bow” and “City folk drivin’ in a black limousine, a lotta sad people thinkin’ that’s mighty keen” have to contemporary urban life? And who can be “early in the sack” when the average Orioles game lasted 3:09 last year? I don’t remember seeing any of this in The Wire.

Mets: “Lazy Mary,” Lou Monte. OK, this is kind of a local song, since Monte was a New Jersey-born Italian-American. And the song is peppy and fun, in contrast to the mood at Citi Field most seasons. It’s been played at Mets games for years, going back to Shea Stadium. And since Monte passed away in 1989 at the age of 72 there’s no risk of him suffering a career-threatening vocal cord injury from his association with the Metropolitans.

Rockies: “Hey Baby (If You’ll Be My Girl),” DJ Ötzi. I suppose this is a variation the “Lazy Mary” theme: An upbeat song that gets people moving, but doesn’t have any connection to the team. The artist, DJ Ötzi, is Austrian (his real name is Gerhard Friedle), and he possesses the sole umlaut in the seventh-inning stretch oeuvre.

Red Sox: “Sweet Caroline,” Neil Diamond. This is probably the most famous non-TMOTTB between-innings song in baseball. But here’s the thing: First, it has absolutely no relevance to Boston. Second, it’s not played during the seventh-inning stretch. It’s played before the Red Sox come to bat in the bottom of the eighth.

I’ve hinted at some of my opinions here, but we want to hear yours! Click here to take our poll for the best and worst seventh-inning stretch music. We’ll keep it open for a while and I’ll post the results at a later date.

Thanks to Patrick Dubuque for creating and maintaining the poll.

You need to be logged in to comment. Login or Subscribe
Erik Teller
GREAT Piece, Rob! As a side-note, the Rockies play 'Rocky Mountain Way' by Joe Walsh after every Home Win. Fortunately, we don't have to endure too much Henry John Deutschendorf, Jr. renditions during the Season. Let Baltimore have the failed Pilot...
Reply to Erik
Rob Mains
Thanks, Erik. The whole song-played-after-victories thing is probably worth exploring.
Reply to Rob
Matthew Gold
Thanks, Rob. I was hoping for a follow-up. FWIW, I'm pretty sure that the Yankee Stadium "tradition" of God Bless America started only after 9/11. For a while it was a slow rendition sung by a local tenor, but that was phased out in favor of Kate Smith. Other frequently heard Yankee Stadium between-inning music is "Cotton Eye Joe" (no obvious relationship to NY or the Yankees) and YMCA.
Reply to Matthew
Rob Mains
Yes, GBA dates back to 9/11, but that makes it longer-lived than several of the songs listed here. And speaking of no relation to NY, the Mets played "Thank God I'm a Country Boy" long before the O's did. Presumably unironically.
Reply to Rob
jonjacoby
Yankees play YMCA when the grounds crew drags the infield (I forget if it's at the end of the 5th or 6th inning.) They used to have Ronan Tynan, one of the Irish Tenors" sing "God Bless America" including the lesser known first stanza, "While the storm clouds gather far across the
Sea, let us swear allegiance to a land that's free
Let us all be grateful for a land so fair, as we
Raise our voices in a solemn prayer."

This stopped shortly after it was reported about Tynan making an anti-Semitic joke to a real-estate agent. Then the Yankees switched to the Kate Smith version, which annoys me because of its association with the hated NHL Flyers.

As for Cotton-Eye Joe, I think it's played at the end of the 7th inning. That and YMCA are relics from 1996 that are long overdue to be retired.
Reply to jonjacoby
Rob Mains
YMCA dates back to the 1970s, of course.
Reply to Rob