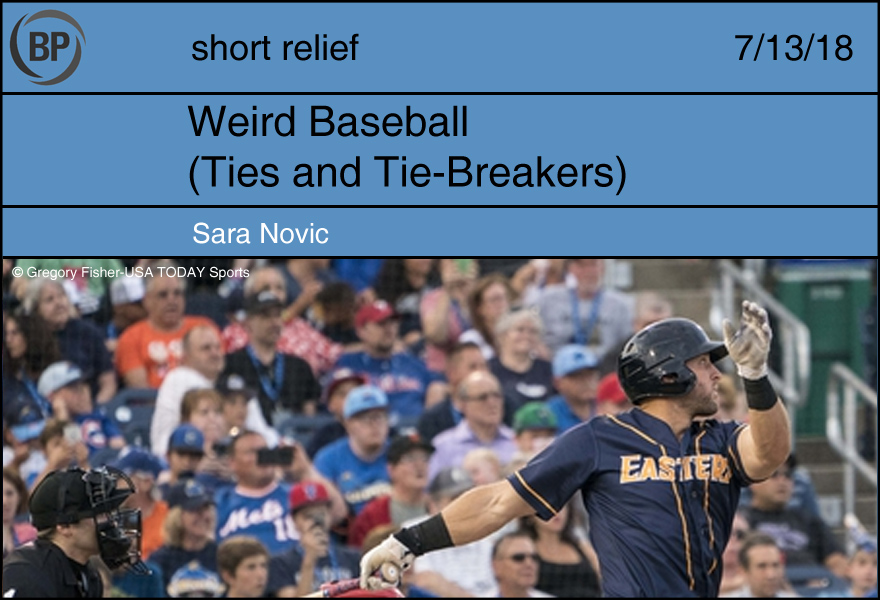 1966: Lyndon Johnson declares he’ll stay the course in Vietnam. The Beatles are now officially more popular than Jesus. Richard Speck carries out a murder spree in Chicago; the Gemini 10 launches spaceward; Cleveland, OH has its first racial uprising in the Hugh Riots; out in LA, Walt Disney dies. And down South the Arkansas Travelers and San Antonio Missions, a pair of Double-A teams out of the Texas League, meet for the first time. In Little Rock, or in San Antonio—who cares, either way it’s hot as they take the field.

It’s a rivalry to last 52 years. And not one of those lopsided rivalries, where one team *cough, Sox* cares more about the contention than the other—across generations, the Travs and Missions are fiercely competitive and well matched.

On July 8th, 2018, the teams arrive at San Antonio’s Nelson W. Wolff Municipal Stadium to face off for the very last time. At the end of the year, the Missions will jump to the Triple-A Pacific Coast League. It rains. The game is cancelled, and with limited time left in the season, the MiLB declares no time for a make-up game.

The Travs and the Missions are never to meet again. Their all-time series record? 310-310 . It is a tie that will live in infamy.

Three days later in New Jersey, The Double-A Eastern League makes some history of its own at Arm & Hammer Park. It’s July 11, 2018—the nation is drowning in a many-layered political turmoil, and, if we’re being honest, most sports watchers have their eyes on the World Cup Semi-Final (Ajmo Croatia!)

Still, it’s the League All-Star Game, and after 9 innings, it’s all tied up at 4-4. 8,296 spectators sigh, settle in for extra innings. But wait! What’s happening? It appears the MiLB has lost its collective mind. Instead of extra innings, it’s time for…penalty shots?

In the tie-breaking hitting contest, each team sends forth one player to get as many hits as he can in a 2:00 minute window. His manager or coach pitches to him, and the hits are scored as follows:

Pirates prospect Will Craig wins the contest for the Western division with 305 points, Phillies hopeful Zach Green trailing with 265. Some hail the mini-derby as a sign of things to come—a way to amp up the excitement, to make baseball great again. To others (well, me), it just makes baseball look a bit like soccer. Either way, safe to say the event has propelled the itself to the top of the charts for bizzaro moments in sporting events.

Tim Tebow, an All-Star for the East, doubles at his first at-bat. 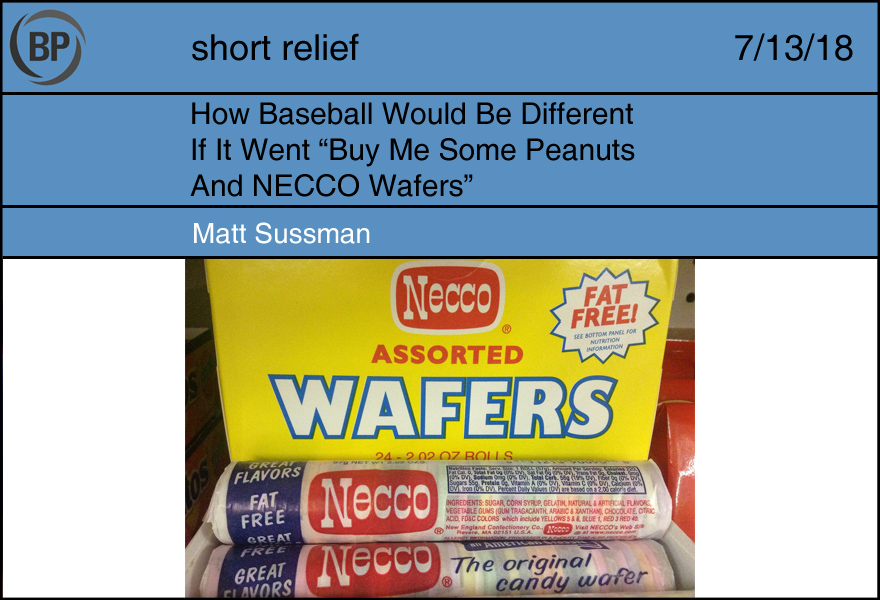 “Take Me Out To The Ball Game turns” 110 this year. The classic song’s little-known first verse was about Katie Casey describing to her boyfriend an ideal date of going to a baseball game. It also gave Cracker Jack all the publicity in the world, enough to sustain it as a product in 2018.

Which brings us to NECCO Wafers, empirically the worst candy ever made, whose company New England Confectionery Company went bankrupt and was nearly bought last month by the company that makes Dum-Dums and Circus Peanuts, but ended up being bought by the same company that saved Twinkies. Absolutely zero people except for self-loathing gourmands are clamoring for NECCOs, but Cracker Jack cannot be taken out of stadiums. You don’t eat it but you would have a fit if it were discontinued, if only for the song.

Imagine if Jack Norworth thought Katie wanted NECCO Wafers instead of Cracker Jack. This is entirely plausible. Peanuts are already in Cracker Jack so there’s no need to double up. NECCO Wafers, which we have already established are terrible, were probably a delicious treat, just as everyone loved baseball way before we had baseball with smartphones. If you ask me, these would be the five biggest changes to history if the song went “buy me some peanuts and NECCO wafers:” 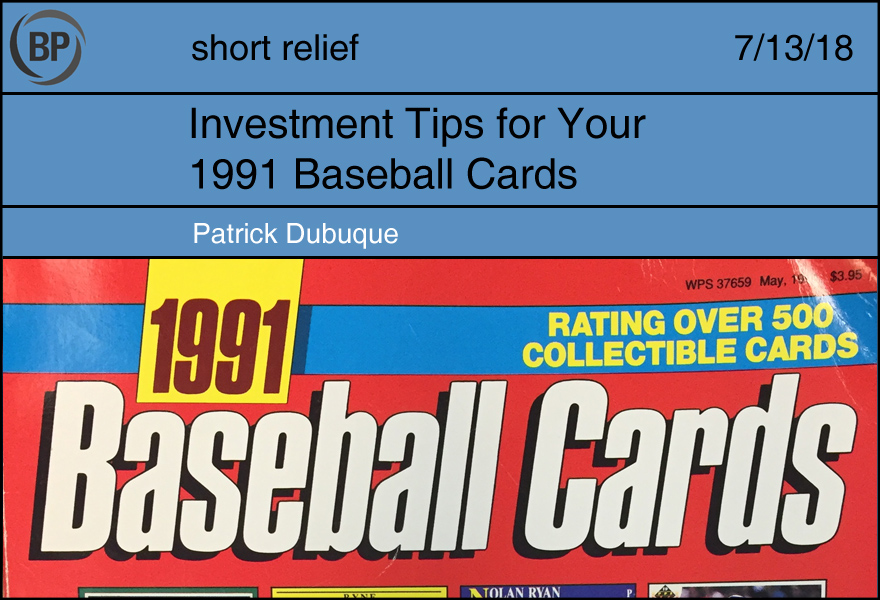 Love baseball, and also love devoting a non-zero amount of your extremely finite living space to boxes of little cardboard rectangles? Wistful for memories of a limited, winnable Middle Eastern conflict? Then collecting 1991 baseball cards might be the hobby for you! Fortunately, I have just invested fifty cents of my own personal money in purchasing a magazine that offers color photos as well as buying and selling strategies for some of your uncle’s favorite players. And now I can, probably without violating copyright law, pass this wisdom along to you.

“In the current baseball card market,” the magazine begins, “cards that you buy for two cents apiece in gum packs can sometimes be sold immediately for $3 or more; frequently cards that are just one or two years old can command prices of $10 or $20.” It’s just that easy! So what can you, a person who’s smarter than everyone else, do? Treat baseball cards like penny stocks, buy cards in volume, and let the unstoppable wave of the hobby sweep you to your mansion.

But that leaves the big question: who? Who do you invest in? Let’s see what the magazine had to say.

Analysis: “With patience and experience, the 24-year-old receiver could develop into one of the game’s top stars. Alomar rookie cards from 1990 fetch at least $2. Sophomore issues for 1991 should be only slightly cheaper, starting near the $1 level. These rates will climb slowly, unless the Indians win a pennant.”

In Retrospect: Sandy Alomar did not develop into one of the game’s top stars. Also, baseball cards are worthless.

Analysis: “Cole may challenge Rickey Henderson for the AL stolen base crown in ‘91. … His 1991 cards seem like swell investments at 15 cents or less.”

Current Value: 1 cent, but only to Alex Cole

In Retrospect: Alex Cole did not challenge Rickey Henderson for the AL stolen-base crown. Also, baseball cards are worthless.

Analysis: “After all the attention he’s received by jumping to LA, Strawberry has become a hot prime-time superstar. His cards may skyrocket as high as $1. Don’t invest. His card values are at their peak and can only go down.”

Current Value: 2 cents, except in Los Angeles, where they’re worth 1 cent

In Retrospect: Darryl Strawberry’s card values went down. They did this because his career tailed off quickly after leaving the Mets. They also did this because baseball cards turned out to be worthless.

Analysis: “The question is, how many Cy Young Awards will Baltimore’s Ben McDonald win in the 1990s? Two? Three? Four? “Big Ben” should become the O’s ace in 1991. Buy his sophomore cards for less than a half-buck each.”

In Retrospect: Ben McDonald won zero Cy Young Awards. Also, baseball cards are worthless, except to remind you of the dessicated aspirations of youth.