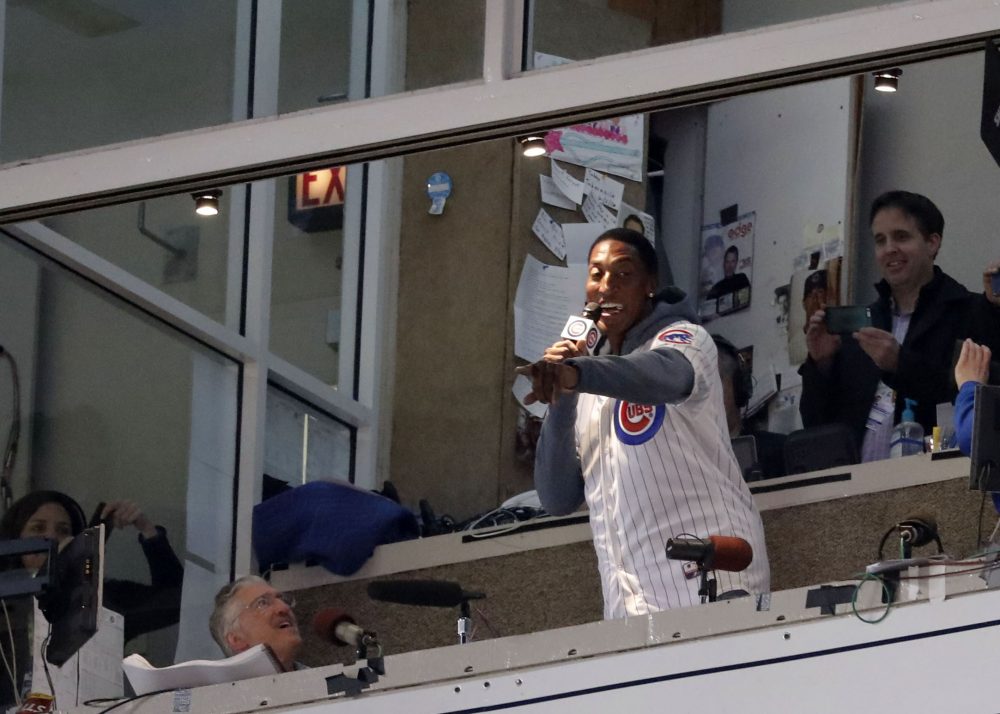 The seventh-inning stretch is unique in sports. In no other American sport is there a specific break in the game during which spectators are encouraged to stand and sing along to a tune. Football has halftimes, and there are breaks between periods in basketball and hockey and soccer. But none are comparable to the seventh-inning stretch.

There are two uniquely endearing aspects of the stretch. The first is that it exists at all. Like much of baseball history, its origins are murky. One theory credits it to President William Howard Taft, who saw the Senators host the Athletics on Opening Day in 1910. The story goes that Taft—a man of, um, considerable substance—grew increasingly uncomfortable in his wooden seat, and stood to stretch in the middle of the seventh inning. The spectators at the game followed suit out of respect. This origin story is satisfying in both explanation and mental imagery, but unfortunately doesn’t seem to be true.

Some historians point to Brother Jasper, the coach of the Manhattan College team. In a game against the semipro Metropolitans in 1882, Brother Jasper, noticing the students in the stands becoming restless, called a timeout in the seventh inning and encouraged everyone at the game to stand and stretch. He instituted the rest period at his team’s games, and the New York Giants supposedly adopted the custom following an exhibition against Brother Jasper’s Manhattan College squad.

Earlier, Harry Wright, manager of the Cincinnati Red Stockings, noted in a letter to a friend in Boston in 1869: “The people out here [in Cincinnati] have a peculiar custom of standing up to cheer the team in the seventh inning.”

The seventh-inning stretch: A baseball tradition since, well, we don’t really know.

The second feature of the stretch is the song “Take Me Out to the Ballgame” (henceforth TMOTTB). Baseball’s official historian, John Thorn, posted a reprint of an essay about the song by George Boziwick on his Our Game blog in 2013, and I’m going to draw heavily from it here.

The song’s original title was “Take Me Out to the Ball Game” and it was written in 1908. Vaudevillian Jack Norworth was the lyricist, and composer Albert Von Tilzer put the song to music.

Decades later, Norworth, who said he’d never previously been to a baseball game, recalled riding an elevated subway in the spring of 1908 when he saw a sign advertising “Ball Game Today—Polo Grounds.” He wrote the lyrics on the subway, and brought them to Von Tilzer, who put the words to music. (Norworth told the story after Von Tilzer died, so we don’t know whether it’s true.) The first recordings of the song, like this one by Edward Meeker, were released that fall.

While the song was always popular, its relationship to the seventh-inning stretch is a recent development. In 1977, White Sox owner Bill Veeck heard his broadcaster, Harry Caray, singing the tune to himself as the organist Nancy Faust played it during a game. Veeck convinced Caray to sing the song live, and lead the crowd, during the seventh-inning stretch. It was wildly popular and quickly became a fixture.

The tune with which we’re familiar is an ode to the joys of being at the ballpark. But that’s just the chorus. Fans rarely hear the full song, which is as much a political and social statement as a tribute to the game. Norworth’s lyrics begin:

Katie Casey was base ball mad,
Had the fever and had it bad;
Just to root for the home town crew,
Ev’ry sou Katie blew.
On a Saturday, her young beau
Called to see if she’d like to go,
To see a show But Miss Kate said “no,
I’ll tell you what you can do:
(Chorus)

The 1908 season was a good one for the game. Both leagues had exciting pennant races. In the American League, the Tigers didn’t clinch until the season’s final day, finishing 90-63, a half-game ahead of the Cleveland Naps and 1.5 up on the White Sox. In the National League, the defending world champion Cubs had to win their last five straight to finish a game ahead of the Giants and Pirates in a pennant race famously marked by Merkle’s Boner. Additionally, the Mills Commission report issued at the end of 1907 declared baseball to be a uniquely American game invented in Cooperstown by Abner Doubleday, boosting the sport’s popularity. (The Mills Commission got almost everything wrong, but whatever.)

Given that backdrop, Norworth’s song capitalized on the game’s growing appeal. It also came at a time of chaos in the lyricist’s life, as described by Boziwick’s article. In 1907, Norworth, who was married to actress Louis Dresser, began an affair with vaudevillian Trixie Friganza. In June 1908, Norworth and Dresser divorced, ostensibly to free Norworth to marry Friganza, but he instead married another vaudevillian, Nora Bayes.

It seems clear, though, that he wrote TMOTTB while still involved with Friganza. The photos that accompanied the song’s release (including the one below) feature Friganza. Boziwick notes that the song was registered for copyright in May 1908, likely near the peak of the affair between the two. 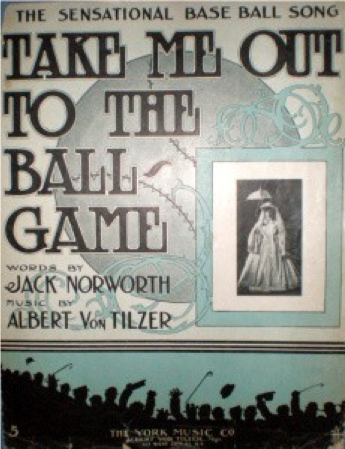 It thus seems that Friganza is the inspiration for the spirited Katie Casey. As the first verse of the song illustrates, Katie was a knowledgeable baseball fan who was independent and self-confident. As a reviewer wrote at the time: “Katie Casey is a true-blue, dyed-in-the-wool base-ball ‘fan,’ and she can give her big brothers pointers on ‘rooting’ for the home team. She’d rather munch peanuts on the bleacheries than caramels at a matinee.”

In fact, in the song’s second verse, Katie Casey takes charge of her fellow fans:

Katie Casey saw all the games,
Knew the players by their first names;
Told the umpire he was wrong,
All along good and strong.
When the score was just two to two,
Katie Casey knew what to do,
Just to cheer up the boys she knew,
She made the gang sing this song:

(Thus was born the tradition of singing the chorus at the ballgame.)

TMOTTB was written at a time of social and political upheaval in America. The vast wave of Irish immigrants to the country in the mid-19th century was becoming assimilated, but there was still widespread anti-Irish, anti-Catholic, and anti-immigrant sentiment. And the women’s suffrage movement was gaining momentum, leading to the ratification of the Nineteenth Amendment in 1920.

At ballparks, women were still somewhat unusual, with their presence stirring resentment from some men in attendance (while owners, seeing an opportunity to both increase gate revenues and reduce brawling and other aggressive behavior, were happy to admit women). Katie Casey, with her ostensibly Irish name and strong sense of independence and leadership, reflects both societal trends while encouraging women to go the ballpark.

What does any of this have to do with the lyricist Jack Norworth and his girlfriend Trixie Friganza? Well, Trixie Friganza was born Delia O’Callaghan, the daughter of an Irish father and Spanish-American mother. And she was a frequent and featured speaker at suffrage rallies. (She’s the woman with the white hat at the rally pictured at right below.) 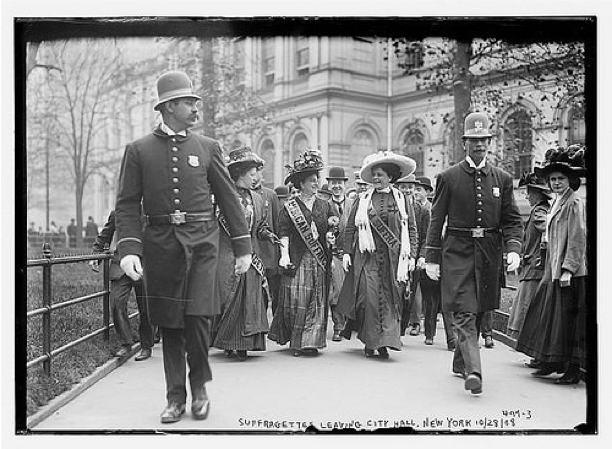 Friganza was her mother’s maiden name, and Trixie kept it through three marriages. She had a long and successful stage and vaudeville career, and appeared in 24 films. Throughout her life, she advocated for women’s rights, the poor, and the arts.

Norworth, decades after TMOTTB was written, described the song as one that he penned one spring day on a subway after seeing a sign advertising a ballgame. That’s possible. It’s also possible that his story is apocryphal, and that he wrote a song about an independent, self-assured Irish-American woman reminiscent of the independent, self-assured Irish-American woman he loved.

The origin of the seventh-inning stretch is unclear. The story behind its unofficial anthem is more interesting.

Thanks to John Thorn for considerable research assistance, and for his Our Game blog, from which the photos here were used with his permission. Thanks to Kate Preusser and Amy Durland for editorial assistance.

You need to be logged in to comment. Login or Subscribe
Adrock
Excellent! More baseball history, please.
Reply to Adrock
Rob Mains
Count on it!
Reply to Rob
Robert Grace
Thank you for a great piece, and for calling attention to Boziwick's fascinating article. My Irish-American dad used to tell stories about Great Aunt Marie hanging out with Christy Mathewson after ballgames, and how scandalous this sort of behavior was for a woman at the time. I wonder if she ever rubbed shoulders with Trixie Friganza.
Reply to Robert
Rob Mains
That would be really cool, though I'm not sure Friganza herself was a baseball fan.
Reply to Rob