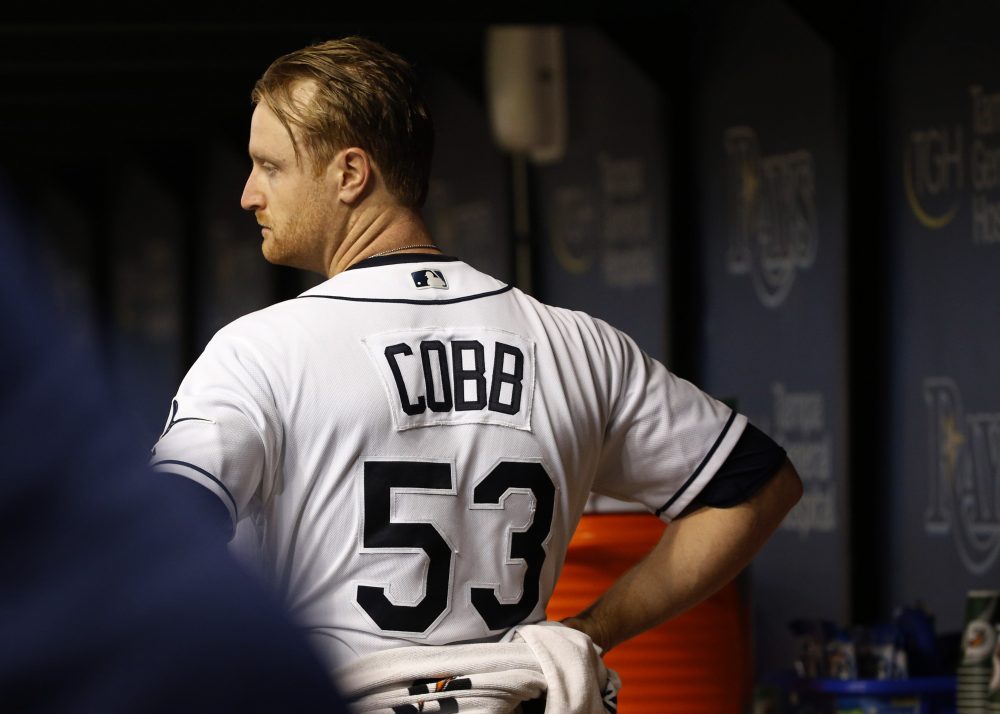 As the past two weeks of this bizarre offseason wind down, right-hander Alex Cobb remains the preeminent unsigned free agent left on the market. Sure, it’s promising that Jake Arrieta managed a $25 million AAV with the Phillies, and the one-year, $12 million pact Lance Lynn signed with the Twins isn’t terribly off-putting, either, but it just doesn’t look like many teams are chomping at the bit to sign the veteran starter with the nasty knuckle-curve and 15.8 career WARP.

Cobb is entering his age-30 season with some underwhelming projections from PECOTA, which has him pegged for a 5.45 DRA and 0.4 WARP—both significantly worse than the marks he managed to achieve in 2017. Still, erring on the side of caution may be wise given the righty’s recent issues, including a lengthy recovery from Tommy John surgery in 2015 and the ongoing battle to reclaim his signature splitter. It’s not inconceivable that he could replicate last year’s 98 cFIP and 3.0 WARP in 2018, of course, but with the unusual pacing and player/owner tensions of the offseason and the wildly different contracts handed to Arrieta and Lynn last weekend, it’s becoming increasingly more difficult to imagine him getting anything close to his initial four-year, $80-plus million ask.

The two most obvious landing spots appear to be the Orioles and Brewers, both of whom could use an extra bolt of energy in their rotations this season. The Cubs and Mets have also shown interest at various points throughout the winter, though the right-hander reportedly rejected a three-year, $42 million offer from the Cubs and is still thought to be too expensive to attract serious attention from the rest of the bunch. While it seems preposterous that Cobb would be left to founder on the market as Opening Day rolls around, there doesn’t seem to be any particular sense of urgency driving a potential deal forward right now.

The Phillies have Jake Arrieta, but they might not be able to use him right away. Club manager Gabe Kapler told reporters Monday that he’s not sure if Arrieta will be ready to go by the start of the season. That won’t affect the team’s plans for Opening Day—Aaron Nola will still get the nod in his second Opening Day appointment (at home, anyway)—but obviously they want their prized right-hander to take the mound as soon as it’s both safe and feasible to do so.

There’s nothing wrong with Arrieta; that is to say, he appears to be in perfect health and passed his physical without incident. It’s more a question of seasoning than physical readiness, as the Phillies aren’t yet sure how much the righty has pitched over the long winter. With the season opener only 17 days away and Arrieta still to face any kind of Grapefruit League competition, the team will likely want to take things slow before tossing him into his next major-league game.

The Yankees picked up veteran infielder Neil Walker on a one-year, $4 million deal, according to a team announcement on Monday. It’s not the flashiest signing the club has made this offseason—by a long shot—but a definite bargain and one that should help anchor their infield as Walker slots into a utility role behind projected starters Greg Bird, Gleyber Torres/Tyler Wade and Brandon Drury. General manager Brian Cashman said that he expects Walker to take reps at first, second and third base throughout the year rather than sticking to any one position. Securing a starting role is another question altogether, as camp is already starting to wind down and the team likes what they’ve seen from other contributors so far.