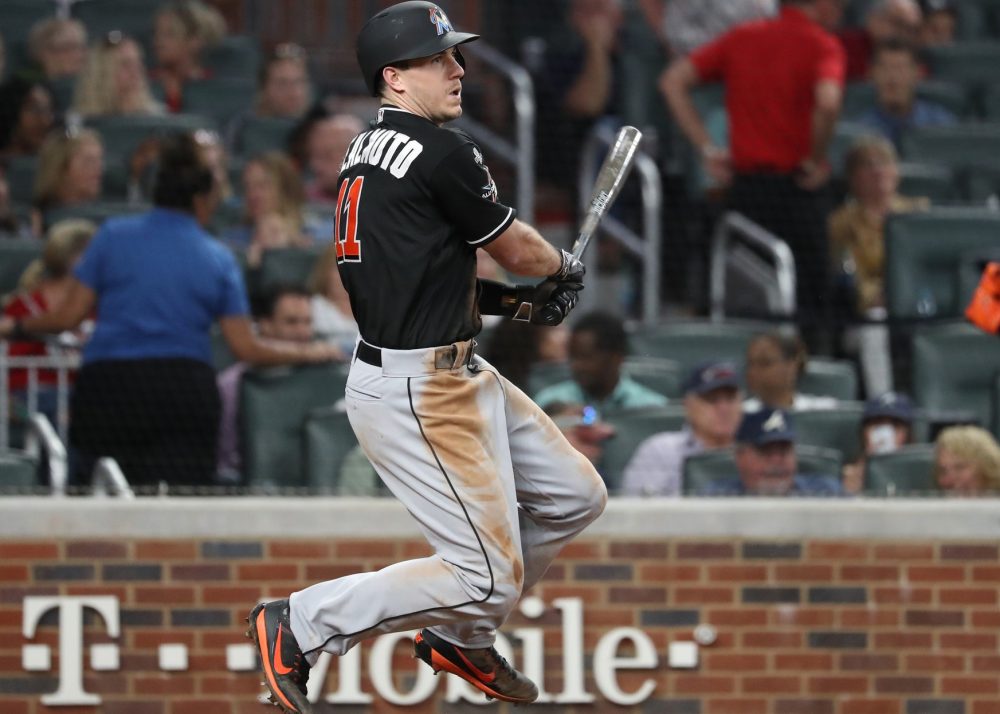 The Marlins are charging full steam toward a rebuild in 2018, but not everyone is on board with the plan. According to Craig Mish of SiriusXM and The Athletic’s Ken Rosenthal, catcher J.T. Realmuto is currently seeking a trade following the departures of Giancarlo Stanton (Yankees), Marcell Ozuna (Cardinals), and Dee Gordon (Mariners). While he hasn’t put in a formal request just yet, further reports indicate that Realmuto’s representatives have initiated talks with the Marlins about a potential trade, which would likely bring Miami a sizable return in exchange for one of the league’s better backstops.

The 26-year-old is coming off of a career-best performance in 2017, turning in a .279 TAv, 17 home runs, and 5.2 WARP. More importantly, he showed modest improvements behind the dish, bringing his FRAA out of the red for the first time with a 14.5 mark, good for sixth-highest among major-league catchers. (When park-adjusted, that FRAA slips to an 11th-best mark of 6.4, still a sizable increase from his -9.0 park-adjusted FRAA of 2016.) He’s scheduled to remain under team control through the 2020 season, and it’s precisely this combination of high value and cost control that appear to be giving the Marlins pause when it comes to potential trade talks.

Realmuto isn’t the only player itching for change. Jerry Crasnick of ESPN reports that outfielder Christian Yelich will meet with Marlins president Michael Hill on Tuesday to discuss the plans for an impending rebuild and his future with the team. It’s the second publicized meeting between the two this offseason, though the Marlins seem even less inclined to deal away a player who will remain under team control for the next four years.

In a statement released on Monday, Hill said the organization would be the first ones to open negotiations this winter: “Should we feel like we need to make a trade involving any of our under contract, controllable players, we will be the ones who initiate that conversation and always do what’s best for the organization.” Put another way: Whether or not they’re happy to be the cornerstones of a newly-gutted team, it doesn’t look like Realmuto or Yelich will be packing their bags for greener pastures anytime soon.

The Cubs are leaving no stone unturned in their search for a new ace, and their sights finally settled on free agent right-hander Yu Darvish this week. The club reportedly met with Darvish on Monday, and while nothing concrete has been announced yet, it certainly seems like the two sides are on friendly terms after Darvish confirmed the 3.5-hour meeting.

The 31-year-old is widely expected to command the most lucrative deal in free agency this winter, and Bruce Levine of CBS Chicago suggests that he’s seeking a “five- or six-year [deal] worth $20 million-plus annually.” That may not be a prohibitive asking price for the Cubs, but they’re far from the only interested parties, as both the Twins and Dodgers have engaged in preliminary talks with Darvish over the last week.

As natural a fit as Darvish may appear to be for the Cubs, Jon Heyman of FanRag Sports hints that their search for their next no. 1 starter is far from over. Alex Cobb, Lance Lynn, Danny Duffy, Chris Archer and former team ace Jake Arrieta have all been connected with the Cubs as possible alternatives, among several others. All but Arrieta would likely come much cheaper than Darvish, though Bob Nightengale adds that every potential front-end starter has an asking price that is currently higher than what the Cubs would prefer.

Over in the NL West, USA Today’s Bob Nightengale hears that the Giants are in on Rays third baseman Evan Longoria. The Giants have several areas left to address over the offseason, from the outfield to the bullpen, and a third base alternative to Pablo Sandoval and Christian Arroyo is definitely one of them. Whether that alternative should be Longoria is less clear.

As he enters his age-32 season, Longoria still has $86 million left on the books over the next five years, and Nightengale speculates that the Giants would need to move a high-salaried player like Hunter Pence ($18.5 million in 2018) or Denard Span ($9 million in 2018, $12 million mutual option in 2019) in order to cut down on costs. From the Rays’ perspective, Span might be the slightly more attractive choice here–as an added bonus, he already calls Tampa Bay home–but there’s little to recommend either player as a straight-up swap for the face of the Rays’ franchise.

Per Marc Topkin of the Tampa Bay Times, at least three other teams are considering making a play for the veteran infielder: the Cardinals, Mets, and Yankees. Of Longoria’s four potential suitors, the Cardinals seem best-suited to absorb the entirety of Longoria’s $86 million contract, though they haven’t entered serious discussions with the Rays quite yet. The Yankees, meanwhile, don’t want to compromise their ability to stay under the luxury tax threshold, and could conceivably adopt a similar strategy to the Giants by offloading a high-salaried player and a prospect or two. No matter which team the Rays end up dealing with, if any, they’ll want to move quickly. Longoria gains full no-trade rights in early April.