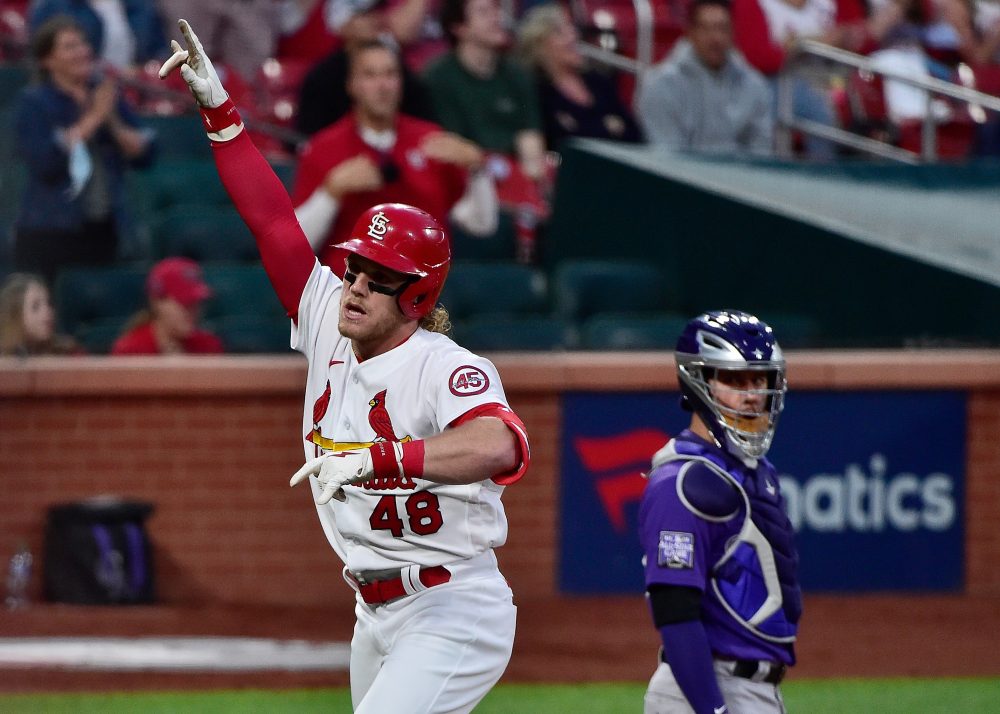 Welcome back to the FAAB Review, the column that examines what been going on in multiple analyst leagues. The hope is that we can help you with your own FAAB bidding process and habits. This year, our primary focus is on The Great Fantasy Baseball Invitational (TGFBI), a contest that contains 29 leagues of 15 teams each and crowns an overall champion. We’ll look at the 10 most popular FAAB buys in those leagues every week. We’ll also mention some of the highlights from Tout Wars AL and LABR NL, two deeper leagues in which I also compete

Tyler Rogers $62 ($124, $31)
After a rough, four-run blow up in two-thirds of an inning in Colorado early last week, Giants manager Gabe Kapler indicated that Rogers could see some save chances. Since then, McGee has one save and Rogers doesn’t have any. While McGee could be another blow up away from losing the job, he and Rogers’ DRAs are comparable, and McGee had a 2.38 ERA before heading into Coors Field. Rogers is a low-strikeout arm who leverages a high ground-ball rate to deliver outs, so the fantasy ceiling is limited unless he takes the job completely from McGee.

Trevor Larnach $49 ($177, $14)
I continued my tradition of grabbing players who I don’t necessarily need with a “keep ’em honest bid” and got Larnach for $15 in my TGFBI. Despite so-so results in the minors, no one doubts Larnach’s power potential, which will be good for a 30-homer seasonal pace if everything breaks right for the Twins outfielder. Questions about his game revolve around whether potential contact issues will ding the batting average enough to curtail his value. With Byron Buxton and Alex Kirilloff both on the shelf, Larnach will start against righties and is one of the more intriguing names on the wire if he’s still available in your mixed league.

Luis García $39 ($72, $1)
García has been written about extensively, by Mark Barry in his Free Agent Watch and J.P. Breen in his Stash List. I will assume that everyone is reading their excellent work, so I won’t rehash all that here. The bullet points worth sharing are that García’s swinging-strike rate is up thanks to increased use of a cutter. The new pitch, combined with a solid fastball and good separation from his change, makes García an improved arm. He was both relieving and starting before Jake Odorizzi went on the IL, so the risk is that he returns to a bullpen role once Odorizzi is healthy. I like García’s short-term value, and while it’s difficult to stash players in a format with no IL slots like TGFBI, García is an interesting spec play with the hopes that he can hang onto a rotation slot even after Odorizzi and Framber Valdez return.

Harrison Bader $38 ($77, $16)
It’s a small sample size, but Bader’s newfound patience is attached to tangible adjustments that he has made at the plate. It’s worth watching him to see if his lower strikeout rate leads to a more acceptable batting average than he has delivered prior to 2021. If Bader can even hit .250, his power/speed combination makes him attractive in nearly all five-outfielder leagues. Hitting eighth is kind of a drag for his fantasy value, but this is a case where you should bet on the talent and worry about the shape of the statistical contributions later.

Pete Fairbanks $31 ($87, $3)
With Diego Castillo on the IL, Fairbanks could be in line for some save opportunities for the Rays. However, last week’s saves went to Andrew Kittredge and Jeffrey Springs, and the Rays historically haven’t shied away from deploying multiple relievers in the ninth and driving fantasy managers batty. The stuff is elite, with command being the only thing keeping Fairbanks from being a top-flight bullpen arm regardless of role. In deeper mixed, you can use him as the occasional non-closer arm if one of your regular rotation arms has an unfavorable matchup. Castillo could return from the IL this weekend.

William Contreras $29 ($125, $1)
Travis d’Arnaud tore a ligament in his thumb, so unless Atlanta makes a trade, Contreras will be their long-term answer behind the dish. Contreras is very athletic, but it is likely that he could use more seasoning and is being thrust into a starting role before he is completely ready. Contreras is a free swinger, and that swing can be wild at times. He has looked overmatched by high-quality fastballs in his brief major-league career. The upside is a .250 AVG and 15-20 home runs, which plays in any two-catcher format. The downside is a low average that is a drain on your fantasy squad and not enough power to justify the AVG penalty.

Tyrone Taylor $23 ($67, $1)
Even with Christian Yelich’s return to the IL, Taylor looked like a fourth outfielder in Milwaukee, but he managed to start five of the last six games for the Brewers in either left or right field. His performance in a limited sample has earned Taylor the opportunity, and there is potential for 20 home runs and 10 steals if Taylor can work his way into a full-time gig. But the Brewers outfield is crowded, and while I like Taylor as a short-term add, I do worry that one slump will push him back to the bench or the minors.

Seth Brown $20 ($57, $2)
Brown and Stephen Piscotty are in a right-field platoon for Oakland, although Brown did get the start on Sunday because of a Ramón Laureano thumb injury. If Laureano needs an IL stint, then Brown’s value increases. Otherwise, it’s tough to roster a player who might only start 4-5 times a week. Brown has five home runs in 63 plate appearances, and it’s not difficult to envision a scenario where he does work his way into a full-time role. Still, I’d only add him on the cheap if I had another player on my roster who was also a platoon option, so I could mix and match every week.

Niko Goodrum $19 ($51, $7)
The 42 percent strikeout rate is brutal, but Goodrum is playing everyday at shortstop and has four home runs and four steals in 105 plate appearances. The Tigers offense is terrible, so Goodrum could feasibly start wire-to-wire and steal 20-25 bases. His value will hinge on his batting average. A .240 AVG is acceptable from a player who could be a 20-20 asset. A sub-.200 AVG could push Goodrum out of a job and off fantasy rosters. He needs to be rostered in most formats while he’s starting.

Danny Jansen $15 ($67, $1)
Alejandro Kirk’s injury opens (re-opens?) the door for Jansen to play full time at catcher for Toronto. He’s sporting a brutal .101/.173/.246 slash line—although he has three home runs in his last four games, which I’m guessing explains the modest FAAB interest. I’m skeptical that Jansen will amount to much, but the power is real. Maybe he can parlay that combined with the favorable offensive environment in Dunedin (for now) into some strong counting stats.

Brandon Crawford $14 ($31, $1)
I don’t know what to make of the Giants graybeard’s offensive resurgence, but Crawford’s line is particularly baffling. Seven home runs and three steals in 99 plate appearances would put him on pace for 33 home runs and 14 steals, which I know won’t happen but is fun to contemplate. Crawford historically has been a reliable hitter who offers 10-15 home runs and 5-10 steals with a .250 AVG. He was an NL-only option who you used in case of emergency in deeper mixed leagues. The most likely path going forward is that this doesn’t last, but even if Crawford slips and is “only” a 20-home-run hitter this season, that still makes him worth a look in 15-team mixed leagues.

I was o-for-3 in my attempt to replace Ramón Urías at my UT slot. My $142 bid on Larnach was aggressive, but Doug Dennis of Baseball HQ blew me out of the water. I bid $4 on Ward and $3 on Ramírez and wasn’t close on either one. I wouldn’t have bid more than $100 on Ward even if I had been aggressive, but I wonder if I should have put a little more FAAB down on Ramírez.

I also wonder if maybe I should have bid something on Rodríguez or Bruján. Tout allows you to stash minor leaguers, but you must carry them on your active roster for a week. Losing a week of Urías’ stats to grab long-term talents like Bruján or Rodríguez wouldn’t have hurt my already moribund offense much.

I stood pat this week. I continue to get lucky with my offensive scrubs, so while players like Duggar and Reyes are intriguing, I didn’t feel the need to invest any FAAB in either. Volume matters in a mono league, and with 291 at-bats in Week 6, I blew away the field (the next team had 221 at bats). Todd Frazier was the hitter who I was considering jettisoning. I felt confident that he’d be the starter at first for the Pirates with Colin Moran’s injury, but they jettisoned him yesterday. What my team really needs is for Mookie Betts to go off and elevate my offense toward elite status.

I like the relief speculation on Brothers and particularly Coonrod, but I already made my bullpen plays last week. In a league with no $0 FAAB bids, you can’t cycle through relievers all year. My strategy in the bullpen revolves more around pushing for additional strikeouts than chasing saves.