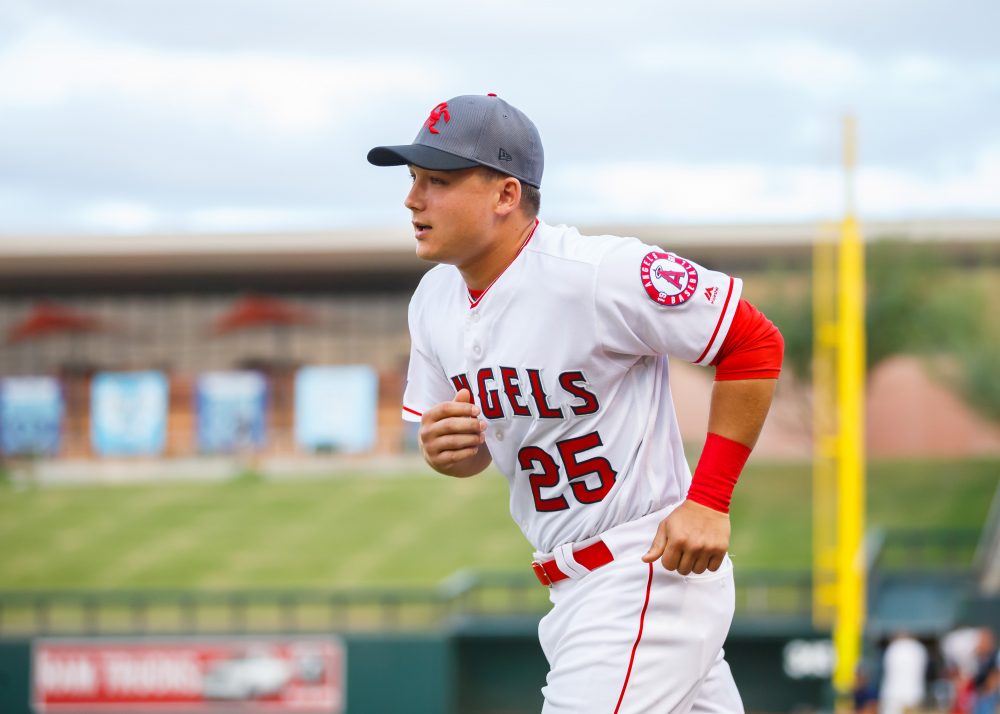 Tout Wars’ free agent deadline is at 8 pm ET on Sunday while LABR’s deadline is Sunday at midnight ET.

This week’s FAAB Review is a Tout Wars-only edition. LABR did not have a FAAB run this week. Tout Wars bids ran on both Wednesday, July 10 and Sunday, July 14 and both sets of bids will be featured in this article.

Giancarlo Stanton $317 (Other Bids: $214, $183)
If he returns in full health, this price will be a bargain for Scott White of CBS Sports. We all know the drill, though. Stanton has already had a setback during his rehab, and it is possible he might not return in 2019 at all. More realistically, the Yankees large lead and seemingly never-ending ability to turn waiver-wire replacement players into on-the-field gold gives the team no incentive to rush Stanton back, and even if he does return, it will be later rather than sooner.

Martín Pérez $23 (Other Bids: $20) (NYM)
It has been a tale of two seasons for Pérez, who stormed out of the gate with a 6-1 record and a 2.89 ERA in his first 53 innings of the 2019 campaign, but has a 6.00 ERA in his last 42 innings with a diminished strikeout rate. The cutter that appeared to have revitalized Pérez’s career hasn’t been the dominating weapon it was in April now that hitters are getting a second look. As is often the case, Pérez’s peripherals indicate that he was somewhat lucky at the start of the season and has been quite unlucky of late. He is keeping the ball in the park, even during this down streak, and could realistically post an ERA in the high threes or low fours the rest of the way.

Daniel Ponce de Leon $87 (Other Bids: $56, $43, $7) (PIT)
J.P. Breen first told Baseball Prospectus readers that Ponce de Leon would eventually be moved to the Cardinals starting rotation in his Week 13 Stash List, and he reminded them again last week. Sure enough, the Cardinals intend to move Michael Wacha to the bullpen so that Ponce de Leon can replace him as a starter. Ponce de Leon pitched to a 1.99 ERA and a 0.82 WHIP over 31 2/3 innings with 38 strikeouts as a long reliever and spot starter, shuttling back and forth between the minors and majors this season. He issues more walks and gives up more home runs than you’d expect with his ratio, but he has made up for it by limiting batters to a .143 batting average, driven by a .175 BABIP. As he racks up major-league innings, regression could drive his ratio upward, and he doesn’t have the history of a high-strikeout pitcher despite his current 33 percent rate. Ponce de Leon is well past the prospect stage at age 27, and he needs to perform well to solidify his future in the game. The walks and homers could undermine any fantasy value he may have as a starting pitcher. If you decided to grab Ponce de Leon for your fantasy rotation, it is best to wait and see whether he shows some improvement before you activate him.

Jeff Samardzija $22 (@COL, NYM)
Shark can provide decent overall numbers, but unless he bounces back to his pre-injury numbers, his best days are behind him. His strikeout rate is down, and he has benefited from some very good luck this season. If he is traded by the Giants at the deadline, a change of scenery could affect his performance one way or another, so be careful if you take the leap and acquire him.

Vince Velasquez $22 (LAD, @PIT)
Velasquez has allowed a whopping 13 home runs in just 56 1/3 innings this season, and oddly enough, his teammates on offense have largely abandoned him, providing an average of just 2.83 runs of support in his 10 starts. He has struggled whether starting or working in relief, so his fantasy value has not been good regardless of his role. There was some speculation that he could end up working as a closer, but that no longer appears to be in the cards. He is starting for now, so the Phillies are either hoping he will come around or showcasing him for a trade, depending on how things shake out for them in the crowded NL Wild Card race this month.

Daniel Norris $18 (@CLE, TOR)
Like Velazquez, Norris has also been homer prone, but has occasionally flashed some fantasy value as a streaming option. The Tigers are almost certain to be trading Norris by the deadline, so this is likely a speculative acquisition.

Darío Agrazal $7 (@STL)
At this point the Pirates have nothing to lose by inserting Agrazal into their front five, as they’ve had all kinds of trouble at the back end of the rotation and Agrazal has been solid in the three starts he’s made so far. He is not a strikeout pitcher, and his swinging-strike rate doesn’t offer the promise of more on the horizon. Instead, he relies on pinpoint control and inducing weak contact to get by. While he may provide some decent ratios as a result, his low strikeout totals will cap his fantasy value.

Mike Brosseau $7
There is some serious pop in Brosseau’s bat, and he has shown the ability to hit for average as well. Combine that with multi-position eligibility, and there is some nice fantasy value to be mined here. Keep an eye on his playing time. If he starts regularly, he’ll be worth the investment.

Robbie Grossman $1
Grossman is having a solid season by his standards. He’s more of a deep-league option, though, as he provides only minimal pop and the occasional stolen base.

Matt Thaiss $63 (Other Bids: $25, $24)
A former catching prospect, Thaiss was moved to first base almost immediately after the Angels drafted him in 2016, making him far less interesting for our purposes. He made a swing change in 2018 that added more power to his profile, but the change that really added viability happened on the other side of the ball, when the Angels moved him from first to third. Tommy La Stella’s injury gives Thaiss an opportunity, and he hit his first major-league home run yesterday. He has a shot at a regular gig because the Angels don’t have a ton of options, but even with the swing change, there are still too many pop ups in the profile to make Thaiss more than an AL-only option.

A.J. Reed $59 (Other Bids: $34, $28)
Five years after being selected by the Astros in the second round of the 2014 draft, Houston finally gave up on Reed, designating him for assignment earlier this month. The White Sox claimed the former top prospect and promoted him to the majors immediately after the All-Star Break. As he moved up the organizational ladder, Reed appeared to be on his way to a solid major-league career, but he had failed to hit in multiple (albeit brief) major-league call-ups and was doing little at Triple-A this season. He’s 26 now, and while Chicago will certainly give him a real opportunity, I wouldn’t hold out much hope that Reed will be productive.

Greg Allen $52 (Other Bids: $0)
A popular sleeper pick in deeper leagues entering the season, Allen has bounced back and forth between the majors and Triple-A in what has been a lost year. Allen hasn’t been anything special with the bat, but this was true last season as well. His failure in fantasy comes due to zero steals in 84 plate appearances. Allen was never projected to amount much as a hitter, so if he doesn’t run, he’s a zero. He is playing regularly for Cleveland but mired in the bottom third of the order.

Heath Hembree $18 (Other Bids: $0)
Hembree picked up the Red Sox most recent save on Sunday, July 7, and it is possible he could be the closer the Boston going forward. However, we have heard this song before with Brandon Workman, Ryan Brasier, Josh Smith and Matt Barnes. There were the last four Boston relievers to convert save opportunities before Hembree. Barnes was the last reliever to collect consecutive saves for the Sox, on April 29 and May 7. This isn’t an indictment of Hembree, but rather a reinforcement of the notion that this bullpen is next-to-impossible to predict. There have also been rumors of Nathan Eovaldi as closer, which certainly wouldn’t help Hembree’s value going forward.

Bubba Starling $57 (Other Bids: $28, $19, $16, $16, $9, $0)
It is understandable that the Royals have given up on Billy Hamilton and his .217/.284/.271 line. Enter Starling, the former top prospect whose minor-league struggles are well documented and won’t be rehashed in this space. Starling is a decent athlete who can hold his own defensively in center field. We don’t know if the bat will play in the majors, but there is no reason the Royals shouldn’t give Starling 200-250 plate appearances to find out. Starling’s Triple-A numbers make him look like a potential 10 home run, 15 steal player with a decent batting average, and while that line won’t come anywhere near the lofty expectations he had as a prospect, it would play in AL-only and even in deep mixed as a fifth outfielder.

Robel Garcia $58 (Other Bids: $47, $47, $12, $3, $1)
Garcia’s story is amazing. He was a washed out Cleveland prospect who left the United States after his release in 2014 to play in Italy and was rediscovered by the Cubs four and a half years later. Garcia was lights out in two minor-league stops before making his well-earned way to the majors. The 26-year-old second baseman has plenty of pop, and Addison Russell isn’t the obstacle he would have been a few years ago. There are no guarantees for Garcia, but I like his chances of carving out a useful role on a Cubs team that can use the help.

Mauricio Dubon $57 (Other Bids: $11)
Dubon was demoted to Triple-A on Saturday, so his major-league stay was short lived, as some predicted. He could be back later this season, although given how deep the Brewers infield is, there would need to be an injury to give Dubon a clear opportunity at playing time. The power/speed combination intrigues, and if you can stash prospects, Dubon is worth keeping tabs on as a potential trade candidate later this month.

Austin Slater $35 (Other Bids: $17, $17, $0)
Slater’s calling card in the minors was a unique opposite-field approach that led to strong batting averages, but a dearth of in-game power made him unlikely to be more than a fourth outfielder in the bigs. At long last, Slater added that power to his repertoire, and the Giants finally gave him another opportunity to crack the starting nine. He has run with it thus far, with three home runs in his first 22 plate appearances. While Slater obviously won’t continue at this pace, he could be a sneaky good fantasy option.

Curt Casali $33 (Other Bids: $3)
I’ve written about Casali so many times in the FAAB Review this year that it feels like the Tout NL experts are trolling me by FAABing him repeatedly. In this instance, Tucker Barnhart’s oblique injury has made Casali the primary catcher in Cincinnati, giving him instant value in any two-catcher format. Casali’s overall numbers are down, but the over-the-fence power remains in place, although finding a catcher who can hit hasn’t been nearly as difficult this season as it has been in the past.