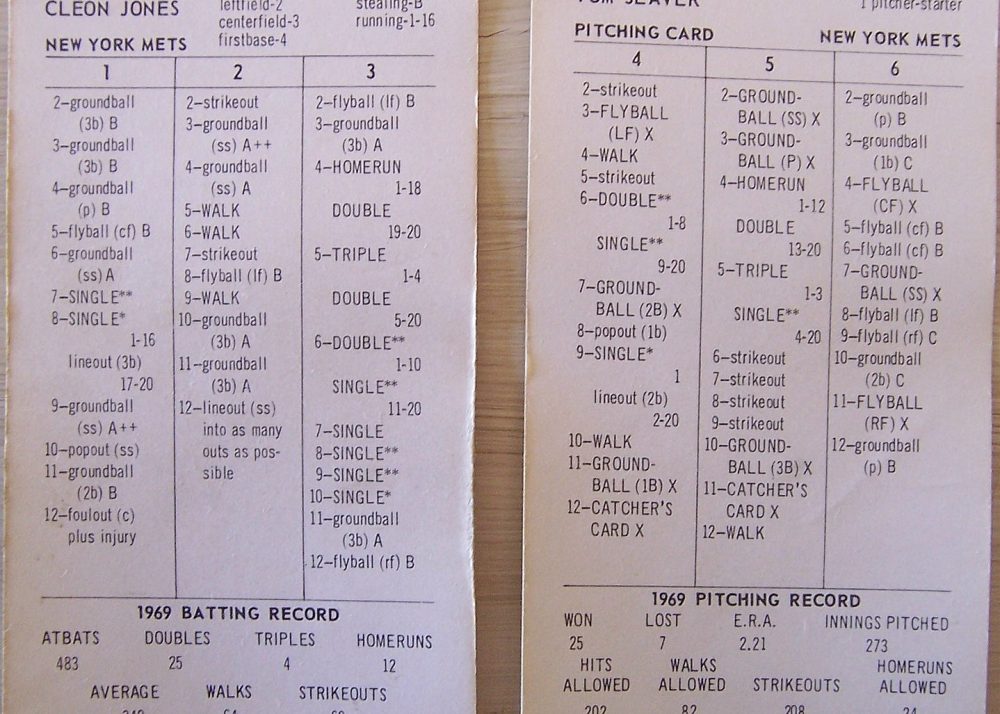 Why This Game? When I was a kid, I bought a Vanilla Ice album on cassette. I hated it. I thought I needed it because that’s what everyone else in my school was listening to at the time and I was embarrassed that I loved The Beach Boys and doo-wop music. By now, I’ve learned that retro things can be lots of fun and nerdy stuff is almost always better than whatever seems cool. Besides, if anyone knows what real “cool” is, it’s me—a 39-year-old dad who still owns jorts.

The history of the sabermetrics movement itself owes a great deal to Strat-O-Matic. In fact, some of the founders of Baseball Prospectus first bonded over the game. Hal Richman invented the dice-based board game in 1961 and, instead of using conventional statistics like RBI and ERA, matched player cards to their actual outcomes. For example, if Mickey Mantle walked in 17.1 percent of his plate appearances and hit a double in 2.6 percent of them, that’s what his Strat card strived to recreate with dice rolls. It was one of the earliest successful attempts to break baseball down more granularly, and it’s a formula the company still uses today to create modern player cards as well as retro seasons, Negro Leagues sets, and Hall of Fame cards. They continue to release a new version each spring based on the previous year’s player stats on both PC and actual printed cards. Given that this is Video Game Week, we’ll focus primarily on the software version.

There are three main reasons to play Strat-O-Matic on PC. Software quality is definitely NOT one of them.

You need to be logged in to comment. Login or Subscribe
Jon Crate
I was introduced to Strat-o-Matic in the mid 90s. A friend of mine got a set of I think six teams, but we usually ended up going Atlanta vs. Cleveland since he loved Maddux and I loved Kenny Lofton. It really did set me up for my love of baseball. Like, even when I was younger and went through having my favorite sport be basketball and football, the idea that there was this game behind the game always kept baseball as my second favorite. Once I was old enough to really understand the advanced stats, baseball really took over. I would love to join a Strat league but if the software is as bad as you say, I don't know that I have the time and patience, ha.
Reply to Jon
Daniel R. Epstein
As much as I bashed the software, I fully endorse joining a league. It keeps me entertained all year long.
Reply to Daniel
Thomas White
FWIW, Strat-o-Matic was not the original baseball simulator, APBA preceded it by about a decade and in fact APBA was based off of game called National Pastime from 1925.
Reply to Thomas
Wyomissing
I loved the portion of the article where you mentioned your draft & trade histories. I had 2 teams in 2012, and I drafted Rizzo in one league (later pick due to .523 OPS) and Weeks in the other. It's not hard guessing which team eventually brought me a title! This is my favorite article of yours so far!

It is a concern that SOM is primarily 40+ yo guys playing the game now. It makes me wonder how the model will be sustainable as a financial enterprise.
Reply to Wyomissing
Daniel R. Epstein
Can you keep a secret? Probably more than half of the articles I've ever written over the last five years have been about players on my Strat teams. Don't tell anyone.
Reply to Daniel
JParks
Really better as a FTF game, I think. Have been fortunate enough to be in a 20 player FTF, cards & dice, pencil and paper league for close to 40 years (started when I was 16, played for a few years, dropped out during college, played for another decade or so until kids and house and real life took over, got back into it probably for good in '09.

The league is known as the John B Wockenfuss league, named after one of the few big leaguers from our great state of Delaware.

Spend enough time staring at screens during work life, nice to go analog in leisure activities.
Reply to JParks
Edward Yang
We tried to leverage the concept of dice rolls for our failed fantasy baseball game Box Baseball. Gave up when the outcomes were too randomly determined by luck. We still have the source code if someone smarter than I were to want to take a crack at it.
Reply to Edward