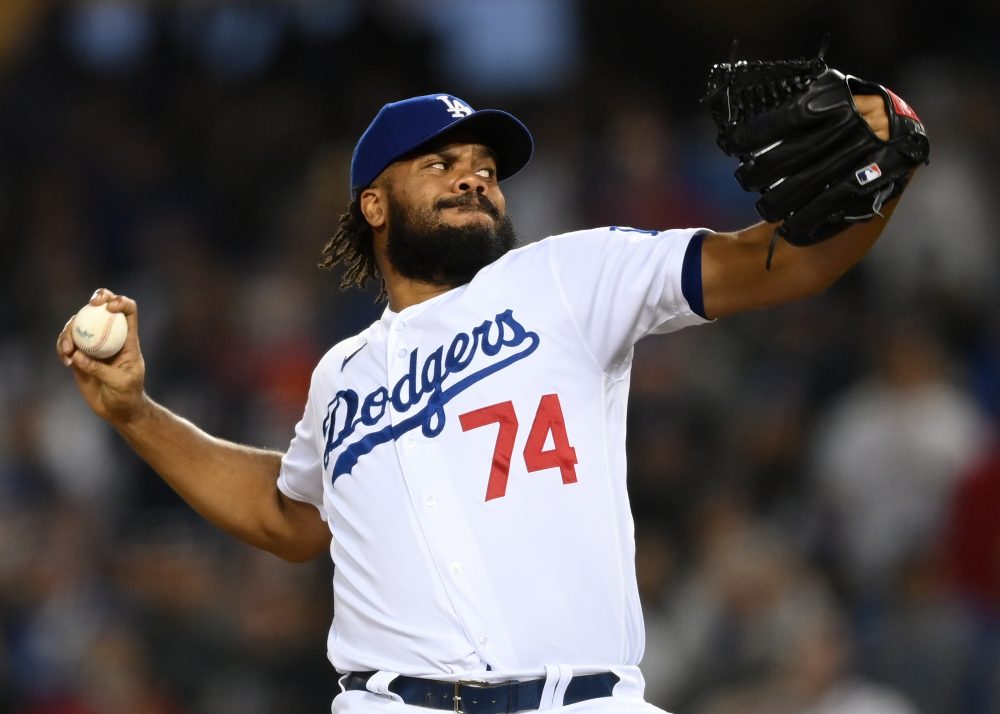 This article was originally published on October 23.

It feels strange to say that one of the most forward-thinking organizations in Major League Baseball still has a Proven Closer, but that is what Kenley Jansen has been for the Los Angeles Dodgers for the last decade. Ranking second among active pitchers in saves behind only Craig Kimbrel, Jansen has gone through quite a character arc since he signed his first deal on the open market—a lucrative five-year, $80 million contract to stay in LA.

At the time, it was a no-brainer for the Dodgers, as Jansen was still on the right side of 30, and was coming off the best year of his career to date. During that 2016 season, Jansen recorded 47 saves while posting a whopping 41.4 percent strikeout rate en route to a 1.83 ERA and 54 DRA-. These were all career bests for Jansen to that point. In 2017, he made the deal look great, putting up numbers that were eerily similar to the prior year.

But things looked to go awry pretty quickly after that, as Jansen regressed in his age 30 season. Suddenly, his strikeout rate plummeted from above 40 percent to below 30 percent, his ERA ballooned from 1.32 to 3.01, and for the first time, Jansen allowed home runs at an above-league average clip. To make matters worse, his fastball velocity decreased for the third year in a row, from 94.2 mph in 2016 to 93.9 in 2017 for 92.3 in 2019.

To be fair, it wasn’t a bad season by any means, but the sharp decline in skills from a pitcher newly in his thirties was an ominous sign of things to come. As great pitchers do though, Jansen took steps to reinvent himself, slowly but surely. Thanks to some tinkering with his mechanics and pitch mix, he has regained his ability to miss bats, get strikeouts and limit homers, albeit not quite to his 2016-17 levels.

Jansen made a career out of throwing a low to mid-90s cutting fastball, but as it has lost its velocity over the years, it has also lost its effectiveness. While Jansen has been able to get some of that velocity and effectiveness back, his usage of the pitch declined once again in 2021. Before 2019, Jansen never went to the cutter less than 83 percent of the time. This year, it has decreased to below 60 percent. 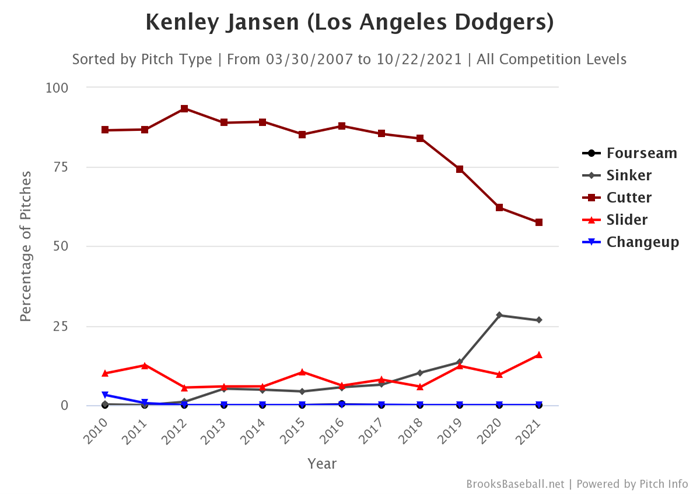 These days, Jansen is opting to go to a sinker just over a quarter of the time. That in and of itself isn’t all that noteworthy—pitchers change their pitch mix and add and subtract pitches all the time, especially as they look to reinvent themselves as they age. What is noteworthy is the profile and the shape of the pitch, as it doesn’t do what sinkers normally do, which is, well… sink.

To get a better idea of what I mean, take a look at this video of Jansen striking out Ryan McMahon.

Everything about this pitch screams four-seamer at first glance; the movement charts, the amount of swings and misses it gets, where Jansen commands the pitch, and yes, even the good old fashioned eye test.

Getting exactly 10 inches of rise, Jansen’s “sinker” is tops in baseball in that category. Hypothetically, if it was a four-seamer, that much rise would still place it in the 99th percentile. By whiff percentage, Jansen’s 32.4 percent mark is once again tops in baseball among pitchers who have faced at least 50 batters.* If it were a four-seamer, it would once again be in the 99th percentile. Finally, here is a heat map for the last two seasons combined, when Jansen sinker usage really ramped up. 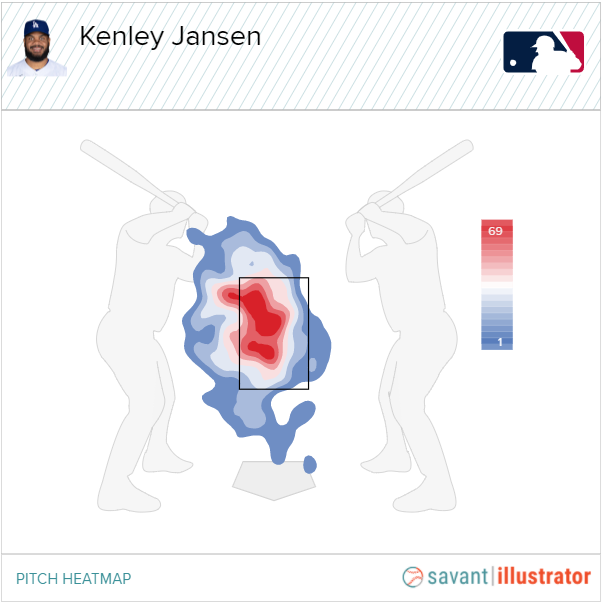 As I dug a little deeper into the pitch, I discovered a few things that didn’t line up with what my eyes were seeing. First, there was the spin direction on the pitch, which according to Baseball Savant, is a perfect 12:00. This means that if it was thrown like a normal four-seamer, it would not have the nearly four inches of arm-side run that it does. If you watch that video back again, you’ll notice that while it doesn’t sink, there is visible horizontal movement.

Next, there is the spin efficiency, or the percentage of spin that contributes to a pitch’s Magnus-based movement. Jansen throws his sinker with a spin efficiency of 94 percent, which is a small but not insignificant bit of gyroscopic spin. At a spin direction that is as vertical as Jansen’s is, that runs diametrically opposed to the arm-side movement the pitch gets. To illustrate what I mean by that. Consider this pitch by Rangers reliever Demarcus Evans.

Why am I showing you this? Because Evans’-four seamer, like Jansen’s sinker, is thrown at roughly the same velocity, spin direction and spin efficiency, yet it is straight as an arrow. Even though Jansen’s sinker does resemble a four-seamer—you can make the case that maybe it is in practice, if it was a true four-seamer, then it would look a lot more like Evans’.

Instead, the shape of Jansen’s sinker, by way of spin-based movement versus observed movement, gets just as much deviation as pitchers who are known for having great sinkers, such as Marlins fireballing starter Sandy Alcantara or fellow Dodgers reliever Blake Treinen. Since those pitchers throw at a lower arm angle, the seam-shifted wake effects push the ball down. For Jansen, they push the ball to his arm-side, while the direction of the spin keeps the ball on the same plane.

In other words, Jansen throws a great sinker that is somehow also a great four-seamer. Paired with his cutter, which is still a plus pitch even if it isn’t quite what it used to be, they are nearly exact mirrors of each other, moving in opposite directions and giving him good movement separation, all the while maintaining a similar plane. And because of where he commands them in the zone, the two pitches also have a similar approach angle. 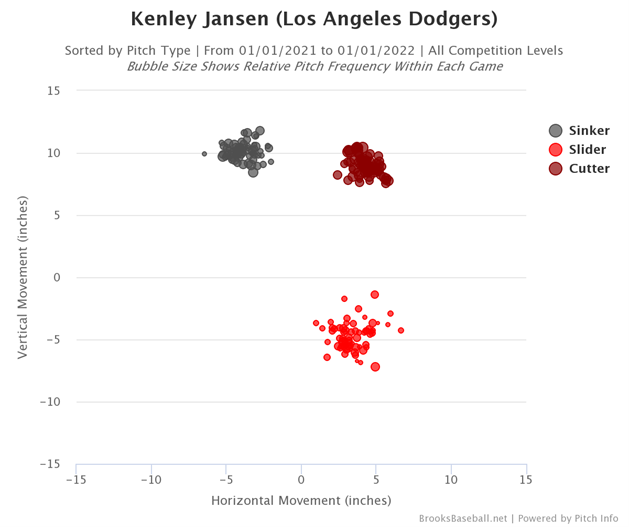 Jansen’s sinker may be one of the more unique and interesting pitches in all of baseball right now. He is the only pitcher in the game who throws it from that vertical of an arm slot, and his movement profile is definitely one of a kind, as he is benefitting from seam-shifted wake in a way that not too many pitchers are replicating.

From a results standpoint, it has allowed Jansen to bounce back to being one of the better relievers in the game (an increase in velocity has helped, too). In 2021, Jansen’s 2.22 ERA was his best mark since 2017. The timing couldn’t be better for Jansen, as he is set to hit the free agent market once again this offseason.

*Jeffrey Springs’ sinker is not actually a sinker