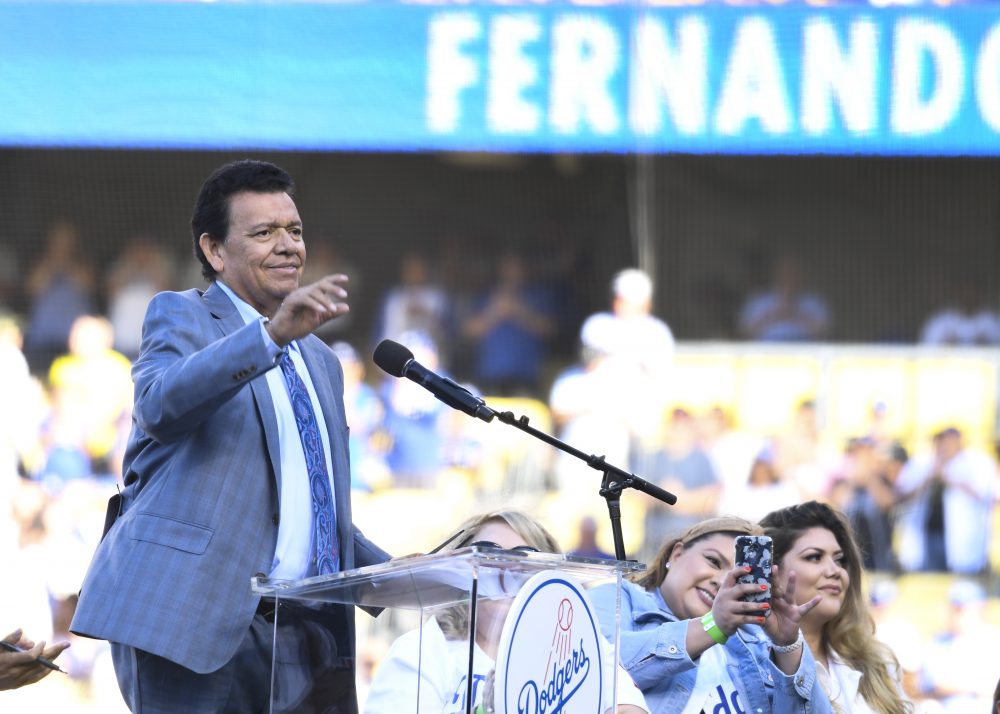 The 1981 Dodgers had an opening in their rotation, as 1980 ERA champion Don Sutton had departed to Houston via free agency. Valenzuela arrived at spring training with hopes of making the club. On March 4, Los Angeles Times writer Mark Heisler wrote, “He is now listed with Rick Sutcliffe as a candidate for the No. 5 spot in the starting rotation.” But Bob Welch developed a sore elbow, Jerry Reuss was sidelined with a strained calf, Dave Goltz got the flu, and Burt Hooton had an ingrown toenail. Valenzuela, the last starter standing, got the Opening Day nod. He pitched well, producing a 2-0 shutout over the Astros, scattering four singles, a double, and two walks.

The legend is that he was an immediate sensation. He pitched fantastically, allowing one run over five April starts. But he wasn’t initially box office magic. The Dodgers’ Opening Day gate of 50,511 was eclipsed in each of the team’s next two home games. His second start was in San Francisco in front of an unremarkable 23,790. His third start was is San Diego, with just 19,776 in attendance on a Saturday. His fourth start was also on the road, a Wednesday showdown against Sutton in Houston. There were 22,830 fans in attendance. Houston averaged 22,596 in its other six Wednesday home dates that season.

After that game, Valenzuela had a 0.25 ERA in four complete-game victories. He’d struck out 36 in 36 innings in a season in which pitchers averaged 4.9 strikeouts per nine innings. And then, his legend exploded.

On April 27, LA Times columnist Scott Ostler titled a column, “Fernandomania.” It was the first time the term had appeared in print (best I can tell). And while the four paragraphs about the young Dodgers star referred to the Dodgers’ Spanish-language broadcasts (hosted to this day by Jaime Jarrín), a dam broke. That night, a Monday in Los Angeles, 49,478 fans packed Chavez Ravine to see Valenzuela shut out the Giants 5-0. It was the third-largest Monday crowd of the year for the Dodgers. In his next start, on May 3, Montreal drew 46,405 to a Sunday contest as Valenzuela beat the Expos. The team drew less than half as many the day before.

It went on like this all year. Valenzuela started three games at home on Mondays. They ranked first, third, and fourth in Dodger attendance on Mondays. He had two Tuesday home starts, ranking first and second. He started five Thursday games; they were the five best-attended Thursday home games of the year. Hs two home Sunday starts ranked fourth and sixth. The Dodgers drew 18 percent more fans to his starts than for others even though he didn’t have any home starts on Friday or Saturday and only two on Sunday.

A June start in St. Louis generated the Cardinals’ second-largest crowd of the year. A return visit in August ranked third. A September 27 Sutton-Valenzuela rematch was the Astros’ second-largest gate. His two starts in Montreal drew Stade Olympique’s largest and fifth-largest turnouts of the season.

There really hasn’t been anything like it since. Nomomania, featuring another Dodgers pitcher, Hideo Nomo, was fourteen years later, but Nomo didn’t pack the stands the way Valenzuela did. The closest recent example was Stephen Strasburg’s 2010 debut, but that was anticipated (he was the first pick in the prior year’s draft) and, unfortunately, short (12 starts before his UCL blew).

Valenzuela led the league in starts, complete games, innings, and strikeouts. He was 13-7 in the strike-shortened season and had a 2.48 ERA, seventh in the league. He won the Rookie of the Year and Cy Young Awards. He led the league with 6.9 PWARP and his 45 DRA- was second.

There are many parallels between 1981 and 2021. A new President was in the White House, having defeated a one-term incumbent of the other party. The economy was emerging from a recession. A deadly virus, SARS-CoV-2, was in retreat in 2021, while a deadly virus, HIV, was first clinically reported on June 5, 1981. A bitter labor/management relationship loomed over the game in both years.

Yet there were key differences that made 1981 feel more dire. The U.S. had been buffeted by the 1973 oil crisis, a subsequent stock market crash, and the 1979 energy crisis. The unemployment rate at the start of 1981 was 7.5 percent and would be a percentage point higher by the end of the year; the most recent unemployment rate (as of March 1) this year was 6.0 percent. Today, there’s some concern that the annual inflation rate has risen to 2.6 percent. Forty years ago, there was relief that it had fallen to 10.5 percent. The Soviet Union represented an existential threat both politically and economically. The humiliating Fall of Saigon was only six years in the past, while the Soviet Union’s disastrous foray into Afghanistan, barely a year old, had not yet devolved into chaos.

Baseball was much less of an international game than it is today. There had been a handful of Latin American stars, mostly from Cuba and Venezuela. Players from the nation on America’s southern border were scarce. The most prominent player from Mexico, Bobby Avila, had compiled 19 WARP in the 1950s with Cleveland. And there were few Latin American pitching stars beyond Juan Marichal (Dominican Republic) and Luis Tiant (Cuba). Valenzuela, from a town in Sonora on the Gulf of California coast, thus had an unconventional backstory. He also had an unconventional build—he’s very generously listed as 5’11”, 180 lbs.—and threw an unconventional pitch, the screwball. (The Neyer/James Guide to Pitchers lists Valenzuela’s screwball as the second-best of all time, after Carl Hubbel’s.)

After 1981, baseball would cede ground to the NBA (the Bird/Magic rivalry was only two years old in 1981) and the NFL (after a strike wiped out almost half the 1982 season). But Valenzuela arrived at a time when the nation needed a new, unconventional hero. It found one that summer in the 20-year-old from Mexico. – Rob Mains

Mexicans in Mexico are very different from Mexicans in the United States. This is no surprise to anyone who’s spent any amount of time either here or there, and with us or with them. But there are brief periods when a single person has the power to unify both nations. Those people usually come in the form of elite athletes or entertainers. Fernando Valenzuela was both an elite athlete and an entertainer, but looked like neither. In fact, he looked a lot like the rest of us.

Earlier this month, we remembered 40 years since Valenzuela’s breakout season with the Dodgers, and homage has been paid far and wide. His baseball abilities have been dissected; his social impact even received ESPN documentary treatment. Yet his transnational impact, and especially the transformational influence he had over the Mexican market, has only been glossed over. Fernando Valenzuela made Mexicans in Mexico become more aware of the inequities our co-nationals face while working in the U.S.

Late 1970s Mexico was flush with oil money but it was governed by José López Portillo, a demagogue with illusions of becoming a winged serpent-god, and societal disparities grew deeper. Fewer people emigrated to the U.S. than in previous or subsequent decades, but the influence American culture was having in Mexico became more pervasive, even though the U.S. was going through its own economic and cultural upheaval.

In the sporting world, Mexico had a dismal 1976 Olympic Games in Montreal and was roundly humiliated at the 1978 soccer World Cup in Argentina, and there were very few bright flashes in between. But a chubby kid from the rural town of Etchohuaquila, Sonora would soften the malaise and bring pride to the nation.

Valenzuela pitched a different game than what the Major Leagues were used to seeing. But his trademark windup, his screwball, his intensity were just the attributes that kids on both sides of the Río Grande mimicked. And adults were also able to imitate his dominance, his power, his deftness on the mound. A person who looked like them—callow, bronze-skinned, cherub-like—reigned over the best ball players in the world.

“He had a very short vocabulary. He came from the humblest of places, and the immediate shock of becoming a superstar made him grow very quickly,” recounts David Braverman, TV and radio sports commentator in Mexico and longtime friend of Valenzuela. “But he remained humble as could be.” This was plainly evident to fans everywhere—he did not have a media persona like most current athletes.

Not since Beto Ávila—Americans know him as “Bobby”—in the 1950s had a baseball player grasped the collective imagination of Mexicans with his foreign heroics. But the feats Ávila achieved appeared only through pool reports in newspapers, on an occasional newsreel, and through the voice of the vaunted Pedro Septién, who called countless games on the radio using only telex wires to describe the action on the diamond. Valenzuela pitched live, in color, without the delay and the idiosyncrasies of a commentator who filters the events. People could see the power of his pitching presence. And this time, people could make up their own mind on whether the ball player was worthy of their admiration. In 1981, he absolutely was.

Televisa—the omnipresent media behemoth throughout the continent—broadcast every Valenzuela start live. And it was a ratings bonanza, too. Even in markets where soccer held a chokehold on the populace’s free time, when “El Toro” pitched, it became a bona fide event. “Baseball has never had bigger TV ratings in Mexico than when Fernando pitched,” said Braverman. “To be fair, the country wasn’t paralyzed, but the sporting arena was. Even the radio call from Jaime Jarrín was broadcast from the U.S. and many tuned in.”

Fernandomanía even made it to the political arena. Ronald Reagan had Valenzuela make an appearance at the White House when the aforementioned serpent-god wannabe quasi-dictator made a state visit to Washington, D.C. (and groveled for massive loans to cover huge inflationary problems). Reagan got what he wanted and López Portillo went back to Mexico City with a nice photo alongside the newly-minted binational hero.

“Politicians have abused Fernando’s good nature since forever,” said Braverman. “But he’s not their puppet. He knows how to play their game, too.”

Many other Mexican and Mexican-American big-league players would go on to shine in the four decades since Valenzuela broke through. Some of them are beacons of professionalism and dedication. Joakim Soria has had a long and successful MLB career and even won the Mexican National Award for Sports in 2010. (Others are incarcerated for drug trafficking or have been suspended for domestic assault.) However, none have captured the hearts of fans quite like wholesome, good-natured, jovial Valenzuela, whose biggest scandal was refusing to go to Dodger Stadium for years after the way he felt he was treated by the organization. “He’s still the same guy,” Braverman said.

Famed columnist Gustavo Arellano already lovingly recounted what it was like to grow up in Southern California during Fernandomania. By all accounts, his experience was shared south of the border, albeit with different burdens and tastes. National pride is something that humankind abuses, but in the right amount, it’s a unifying force like no other. For half a decade, the stout youngster from Etchohuaquila held the attentions of two nations that have really always been only one. His pitching arm was abused and overworked, just like the bodies and souls of countless workers—a very apt symbol of what it means to struggle as a working-class citizen.—José M. Hernández Lagunes

Many thanks to Toño Moreno for his help in sourcing.