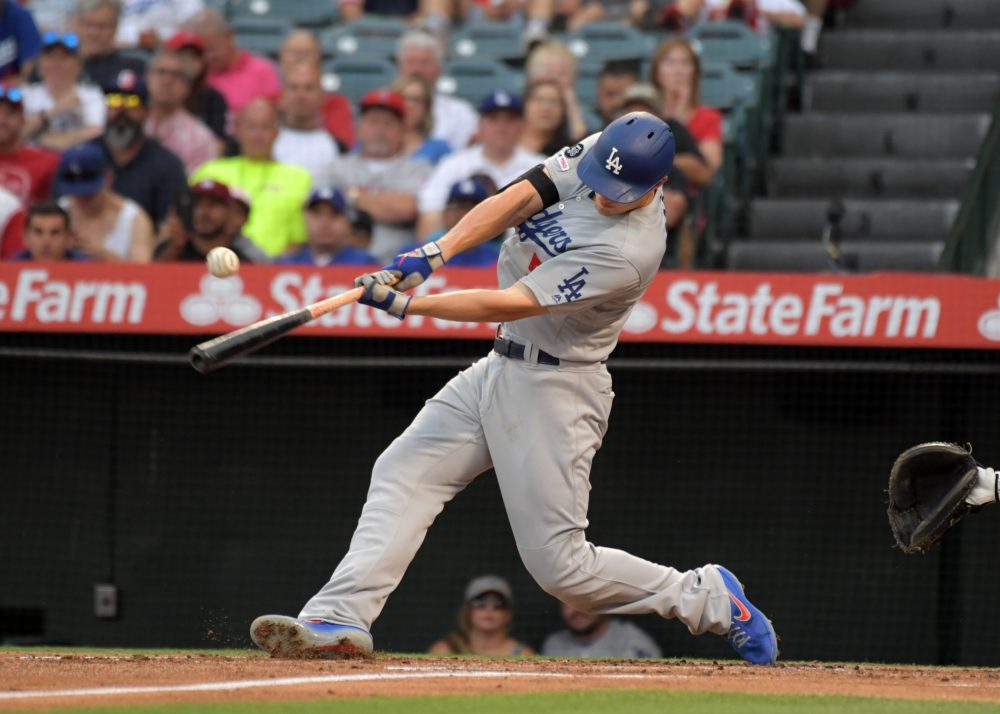 Now that Francisco Lindor is off the market, the top free agent of the upcoming class might well be Dodgers shortstop Corey Seager. After still-solid seasons marred by injuries and inconsistency, Seager busted out in the shortened 2020 season. He hit .307/.358/.585, and sustained that success throughout the Dodgers’ run to a World Series title. One major ingredient in his superstar turn was taking his aggressive approach early in counts to a new extreme, and that shouldn’t surprise you. Now, more than ever, you’d better step into the batter’s box ready to swing. If you don’t hit something early, you’re unlikely to hit anything at all.

Before the 2015 season, I wrote about the way the progress of a plate appearance–from the first pitch to the deciding one, whenever that came–had been distorted over the preceding half-decade. At that time, before the advent of Statcast and without the detailed information about the ever-changing liveliness of the baseball that we now bake into every conversation about league-wide offensive trends, studying the approaches batters and pitchers each took based on the count provided valuable insight into the way pitching was taking over the game.

The endangered status of runs is no longer as great a part of the national narrative around baseball, thanks mostly to the livelier ball. However, many of the trends I identified six years ago have only continued, and some have accelerated. The conditions that so depressed offense from 2011-14 mostly persist, with the exception being that the ball takes off like Bryson DeChambeau hit it whenever a batter squares up a pitch. That means that most batters need to seek the first good pitch they get every time they come to bat, and reduces both the margin of error and the breadth of the spectrum of approaches within which hitters can find success.

Seager put the first pitch in play 58 times in 2020, including the postseason. That was the most in baseball. Only four batters (Luis Robert, Jeff McNeil, Luke Voit, and Brandon Crawford) swung at the first pitch more often than did Seager. When he did resolve the plate appearance on the first pitch, Seager hit .333/.345/.649. That’s an eye-popping line, but in thriving on the first pitch, he was hardly alone. In fact, the league hit .343/.355/.597 on the first pitch in 2020, so Seager’s success stands out for the number of times he availed himself of the advantageous situation more than for the sheer level of that production.

This has been a growing trend throughout the league, for years. The five highest league OPSes on the first pitch, since pitch-by-pitch data began to be tracked in 1988, belong to the last five seasons. Pitchers throw fewer fastballs on the first pitch with each passing season, but it seems as though hitters have only gotten better at sitting on a certain pitch, putting their best swing on that pitch if they think they spot it out of the hand, and doing damage when they’re right.

When they’re wrong, of course, hitters usually find themselves behind 0-1, and things are dicey for them. That’s always been true, though, and in fact, it’s slightly less true than it’s been for most of baseball history. Relative to overall production, OPS after falling behind 0-1 was less affected in 2020 than in any season since 2003. The opposite is true of getting ahead 1-0; it hasn’t helped so little since that season. The league’s OPS after getting ahead 1-0 in 2020 was .832, which is good, but it pales in comparison to the .952 OPS on the first pitch, and not swinging at the first offering hardly guarantees that one will get ahead 1-0, anyway.

The fundamental problem to which these data point, and which continues to erode offense and force it to express itself in ever more narrow, power-centric forms, is that pitchers are too good at throwing strikes. The league is full of hurlers who can fill up the zone with their breaking and offspeed stuff, as well as their fastball. The death of the “fastball count” is a constant topic of broadcast conversation, and with good reason, but it’s important to understand that that change is born of more than a newfound refusal to give in. Rather, it’s because pitchers know they can pitch with their secondary offerings in the zone. In those counts, hitters look fastball, so if they do swing, they’re unlikely to make solid contact with another kind of pitch. If they don’t swing, they’re often staring at (what only feels like) a hanging slider. As a result, only 12.4 percent of plate appearances reached a 2-0 count in 2020, the lowest number on record. Even since I studied that number six years ago, the rate has steadily fallen.

Meanwhile, 0-2 counts are more common than ever. Once a count gets to 1-0, it goes to 2-0 just 33.1 percent of the time, but once it’s 0-1, it goes to 0-2 42 percent of the time. The latter figure is up from 38.5 percent even since 2014. Overall, over 53 percent of plate appearances reach two-strike counts, and a new record is set in that category almost every year. The strikeout rate once the count gets that far is over 43 percent, and has also risen steadily. In addition to radical, ongoing advancements in training, the failure to expand the league has led to a surfeit of pitchers who combine overpowering stuff with great control. For most of baseball history, we have underestimated the importance of moundsmen who struggle with control of anything but a fastball. Now that those are in short supply, only a lively ball and lineups chock-full of sluggers can provide consistent offense.

Ask Christian Yelich. Just two years ago, he was in the hunt for a second straight NL MVP award. After a foul ball kneecapped him in September 2019, though, he had to rehab throughout the winter, then suffer along with everyone else through the disruption of the pandemic. Last year, the rust showed, as his DRC+ plunged from 167 to 107. He batted .205/.356/.430, and much of the trouble stemmed from too many deep counts. In 48.2 percent of his trips to the plate, Yelich reached a 1-1 count. That was the 10th-highest share in the big leagues. In those 119 plate appearances, Yelich batted .160/.294/.320, with 46 strikeouts and 18 walks. That level of disaster reflects things that run deeper than count dynamics, but the struggles speak to something more universal.

Last year, the strikeout rate in all plate appearances that reached 1-1 was 28.5 percent. That’s easily the highest ever, and has been on the incline for over 15 years. It only reached 25 percent back in 2015, so if anything, it’s a trend gathering steam. Think about the kind of hitter that can sustain a 28.5-percent strikeout rate, while still delivering significant offensive value. That, increasingly, is the kind of hitter everyone has to be, because the erratic pitching that acts as oxygen for a patient, punch-over-pop hitter is too scarce.

Despite these facts, hitters swung less often (under 27 percent of the time) on the first pitch in 2020 than they had since 2014. This year, in a small sample, that figure is even lower. That suggests that there could be an effect whereby hitters swing early less often early in the season, as they get up to speed and see pitchers for the first time since the previous campaign, so maybe the rate of first-pitch swings will sharply rise over the coming months. Still, for now, hitters are facing the same creeping threats they’ve faced for the last 20 years, and the rate of that creep is accelerating.

The ball might keep flying this year, but only that will prop up offense that remains endangered, in a broad sense. Expansion might eventually cure some of these issues, but that button can only be pressed every several years, and might be insufficient, anyway. As long as pitchers can keep attacking the strike zone with such a variety of stuff, hitters are going to continue to be cornered into power-focused, hyperaggressive approaches, and those who don’t make the adjustment will continue to struggle. Something real and vital is lost, when this is true. If a good at-bat (from the hitter’s perspective) mostly involves going up and hacking at one of the first two pitches, that’s not as rich an interaction as the batter-pitcher showdown ought to be. Even a great ambush no longer is one, really, because the pitcher is as aware as the batter that the first pitch is a dangerous one. The old Greg Maddux axiom that the real action count is 1-1 is as far from fitting into modern baseball as Maddux himself is. Smart hitters now take a frontloaded approach, but that also means that the action in a plate appearance is necessarily frontloaded, and there’s an aesthetic cost to that shift.

You need to be logged in to comment. Login or Subscribe
Kieran West
I'd be curious to see what the rate of first pitch swings is for hitters like Seager on their first time facing a pitcher. If they're not at all familiar with the way the ball looks coming out of the hand of a certain guy, do they just swing and hope for the best? Do they look into the likelihood of the pitcher throwing a first pitch fastball? I'm sure that data would be SUPER annoying to compile, but it may be interesting.
Reply to Kieran
Llarry
I see a couple of interesting questions coming from this:

Do First-pitch swings, and success rates, increase after the first at-bat in the game?

Do swings/success increase after the first matchup of the season/career?

In other words, does the batter need some direct experience with the given pitcher first?
Reply to Llarry
Kieran West
Totally. Sort of a reverse of the times through the order penalty research but with a different lens.
Reply to Kieran
jjw
‘That means that most batters need to seek the first good pitch they get every time they come to bat, and reduces both the margin of error and the breadth of the spectrum of approaches within which hitters can find success.’
I believe Ted Williams gave the same advice, and I guess he had some experience to back this up? lol
Reply to jjw
Wade Mathieson
Is there any evidence to suggest that running up pitch counts, while detrimental to the individual at bat, might generate more offense overall (in later innings) as the pitcher's stuff degrades (assuming it even does)???

How does this dovetail with the above?
Reply to Wade