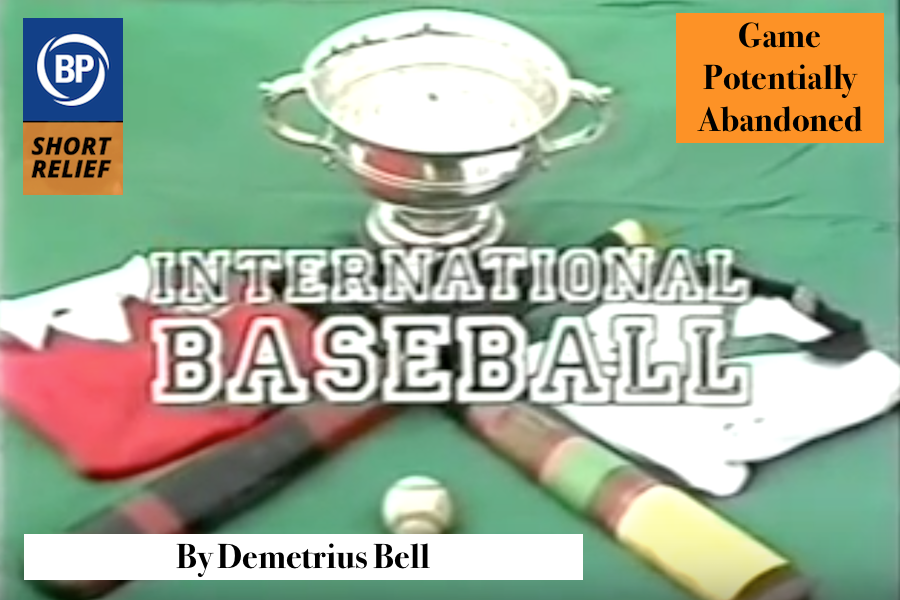 I’ve spent way too much time on the internet since around 2003. That’s more than enough time to learn about the dangers of going down a YouTube hole using a Wikipedia shovel. Sometimes it leads you into a dark part of the internet that you regretted visiting and you want desperately to scrub what you saw from your brain. It’ll be impossible to remove it from your memory, but it still sticks in the back of your brain for years and years after you first witnessed it.

That’s how I feel about British Baseball. I’m not talking about the game of baseball that we talk about regularly here on this wonderful website. I’m talking about a completely different offshoot of the game that you and I know and love. It’s a little bit of baseball and a whole lot of Britain and this is what you get.

There’s a diamond, but there’s no dirt. The only player wearing a glove is the guy catching the pitches. Speaking of the pitches, they’re being tossed underhand. Everybody is wearing long-sleeved shirts and shorts with high socks. The boundaries appear to just consist of whatever the sun touches. From an American perspective, it’s such a bizarre mix of cricket and soccer. The pregame “Starting XI” is definitely lifted from soccer, and the actual on-field action reminds me of the approximately 90 minutes I spent watching cricket. Yet, this was baseball for a lot of people in Great Britain and it was to the point where this particular game between England and Wales had been played annually since 1908.

Unfortunately for the fans of this version of the sport, it appears that things have been on the downturn as far as this version of the game being played. It was already a bit of a niche sport even in Britain but now, the game is declining. According to the BBC, fewer and fewer kids are taking up the game, so that means that the lifeblood of the game is drying out significantly. It’s already been a major problem for the sport and it’s to the point where the battle for the Rose Bowl was called off in 2015 due to a lack of players.

Baseball in general appears to be doing fine in the UK. There’s a reason why MLB would send the Yankees and Red Sox over there for a regular season game and it wouldn’t happen if there was a lack of interest for the sport. Still, as one version of the sport appears to be on the rise across the pond, another appears destined to become a fading memory and one of those things that you’ll only find out about when you’re scrolling Wikipedia at 2 AM on a boring night in. 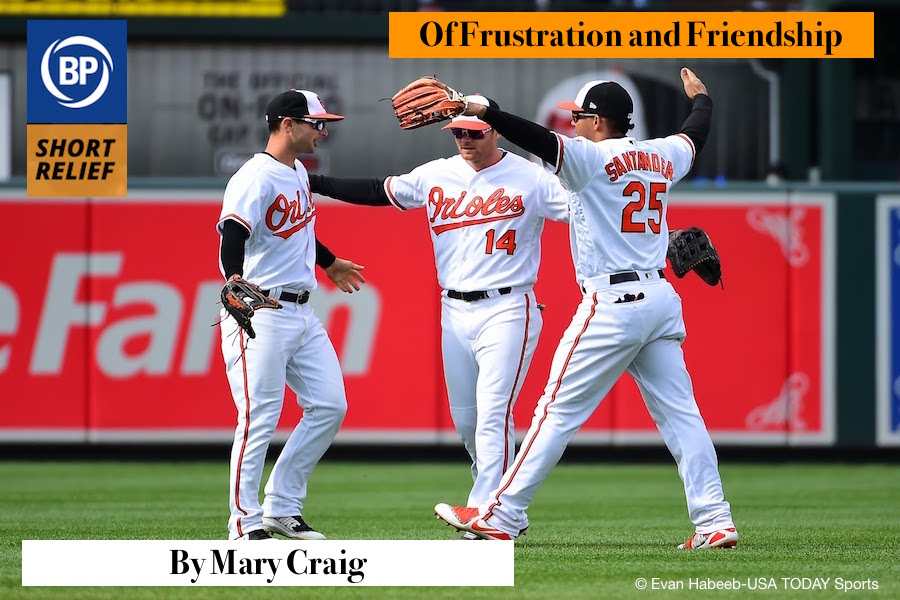 Sometimes even the most thorough preparation does not prepare us for the events we face in life or the things that will happen to us. Sometimes there are moments that are so absurd it seems like the world has singled us out specifically to taunt us. Sometimes all we can do in these moments is shake our heads, walk away, and try again the next day with the understanding that these moments happen to everyone.

I’ve never met Anthony Santander, but after this morning, I feel quite a kinship with him. You see, I’ve spent the past couple of weeks putting together the syllabus for my course this fall, and this morning, I was determined to be done with it. As most syllabi are, I knew it was probably too ambitious, particularly for a required course most students can’t drag themselves out of bed to attend, but if I used class time as efficiently as possible, I figured I could get by without cutting out material.

Naturally, as soon as I exited the document, I received an email notifying me of the fact that afternoon courses for October 31st were cancelled. You see, the school needed that time to ensure parking areas were adequately cleared for that evening’s football game. Suddenly, the already ambitious syllabus I had prepared became impossible to execute, and alterations were necessary.

I re-opened the Word document and searched for material to cut. But every time I deleted a title, I thought about how integral that case was to the theme I had so brilliantly crafted and what my constitutional law professors would think about me omitting a landmark case. And so I re-added the case and began to scour for a more suitable elimination.

On and on this went, all afternoon. Every time I picked something to eliminate, it managed to bounce off that wall and right back to me. All the training I had received failed to prepare me for how difficult I would find this overwhelmingly easy task. The hours ticked by and the ball was no closer to my intended target than when I first fielded it.

In my frustration, I exited the document, chucked my textbook at my bookcase, and went in search of something to assuage my anger. What I ultimately found was a friend in Anthony Santander. 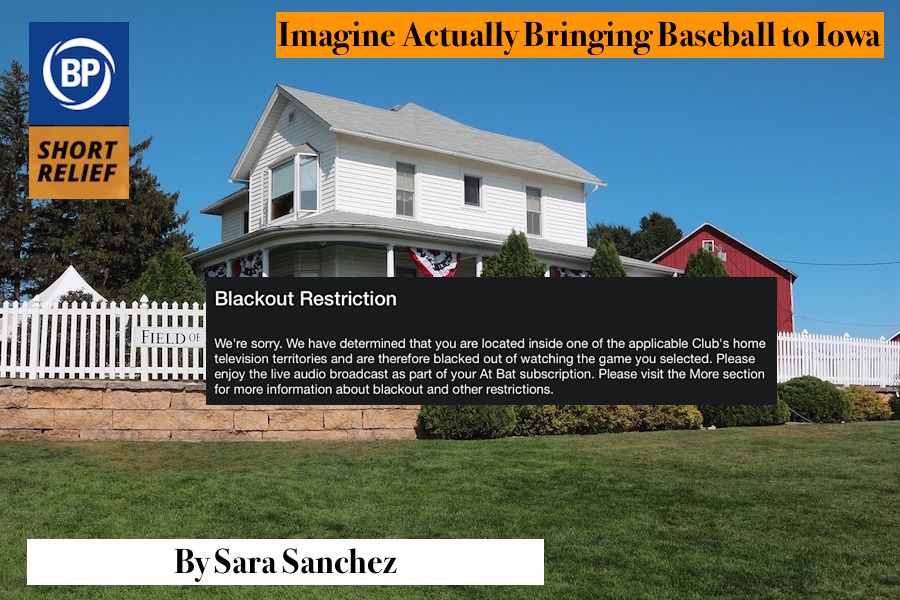 Imagine if MLB really wanted to bring baseball to Iowa.

The text my brother sent me just said “fake news” which was a bit confusing for a couple of reasons. First, I hadn’t texted him in multiple days, so whatever news he was responding to wasn’t anything I had told him. Second, we long ago agreed to not talk about politics for the good of our relationship and my sanity so in all likelihood this was about baseball. I just had to figure out what Rob Manfred had done now that had my brother worked up.

Like all good millennials I sent him a questioning GIF.

He replied with “it’s not the Field of Dreams.”

I did what I always do in these conversations and tried to explain the logic of the situation. I told him about the size of the field, the power lines overhead, all of the exceedingly rational reasons that the Field of Dreams game was not in fact going to be played on the Field of Dreams, but with every line I typed I came to the realization that he was right. Far from “if you build it, they will come” Major League Baseball’s 2020 Field of Dreams game was more like “if you rebuild it, make it bigger and put it somewhere near the original cornfield it will be close enough.”

I got the sinking suspicion that just like other promotions MLB has designed in recent years it seemed this attempt at rural outreach and nostalgia may have missed the mark.

Now, I haven’t conceded an argument with my brother in years and I’m banking on him not reading this to keep that record intact, but the more I thought about this the more I wondered about an even more problematic angle of this game he hadn’t brought up. After all, Iowa is in the worst possible position for baseball’s infamous blackout map. There is no major league team in Iowa, yet they are blacked out from all of the following teams: Twins, Cubs, White Sox, Cardinals, Royals and Brewers plus whoever those teams are playing on any given night. I’ve never understood the logic of excluding an entire state from access to close to half of the league’s games and it doesn’t seem like a single game at the almost Field of Dreams is really going to make up for it.

Rob Manfred commented that: “We look forward to celebrating the movie’s enduring message of how baseball brings people together at this special cornfield in Iowa.” I can’t help but wonder how much baseball could bring together the people of Iowa if the people who were willing to pay for MLB access were finally allowed to watch it without restriction.