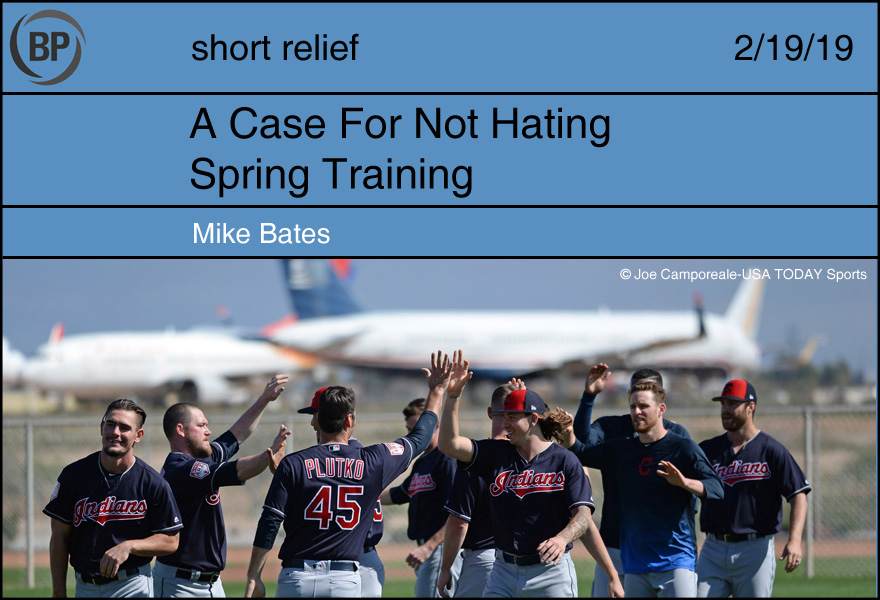 Reader, last week in this space, James Fegan, a fine man and colleague whose opinion is to be respected, wrote that Spring Training is “a false liferaft amid a sea of boredom and unwanted college football recruiting updates.” He calls it “lame,” “meaningless,” and “incredibly long.”

He is, I’m sorry to say, right on most counts. Spring Training is deeply unsatisfying in many, many ways. The games are not played like real games. The players are not trying to win so much as they are working toward individual goals, and trying to finish up so that they can get a quick 18 holes in before dinner with the wife and kids. The only real victory, like a middle-aged dad on a snow day, is not getting hurt.

And with Bryce Harper, Manny Machado, Dallas Keuchel, and Craig Kimbrel still unemployed, the offseason feels unfinished, even as we transition into our ritual Spring dryhump. It is so easy to be discouraged, especially if every other day is a Winter Storm Warning, like it has been for me.

But here’s the thing: I am really tired of being angry at Major League Baseball. It’s been such a long winter already, and I’ve spent most of it furious over the way that teams have approached the offseason, refusing to make upgrades. It’s been eating away at me, making me a bitter little man. Even though Spring Training has begun, we still have a little over a full month before the A’s and Mariners open the 2019 schedule in Japan. I can’t spend the rest of it resentful.

That resentment isn’t going away, especially as long as Rob Manfred keeps making excuses for the lack of offseason spending, but it does need to be pushed aside so I can make room for the fun of watching something that resembles baseball, even if it isn’t quite the game I love. It’s something, which is, at least in most cases, better than nothing.

So I’m going to do my best to enjoy Spring Training, even as my rage simmers just below the surface. I’ll head down to Arizona in a month and go to games. I’ll pay too much for tickets and for food and definitely for beer and cheer and have fun because the simulacrum is close enough for me, at least for now when I’m a desperate man crawling across the desert toward what I think is civilization.

And if I can provide one more counterpoint to Mr. Fegan’s argument, it would be that this doesn’t look all that lame:

I am pleading – PLEADING – with you. Find a way to get to spring training at least once in your life. pic.twitter.com/Ve1Uc31qLW 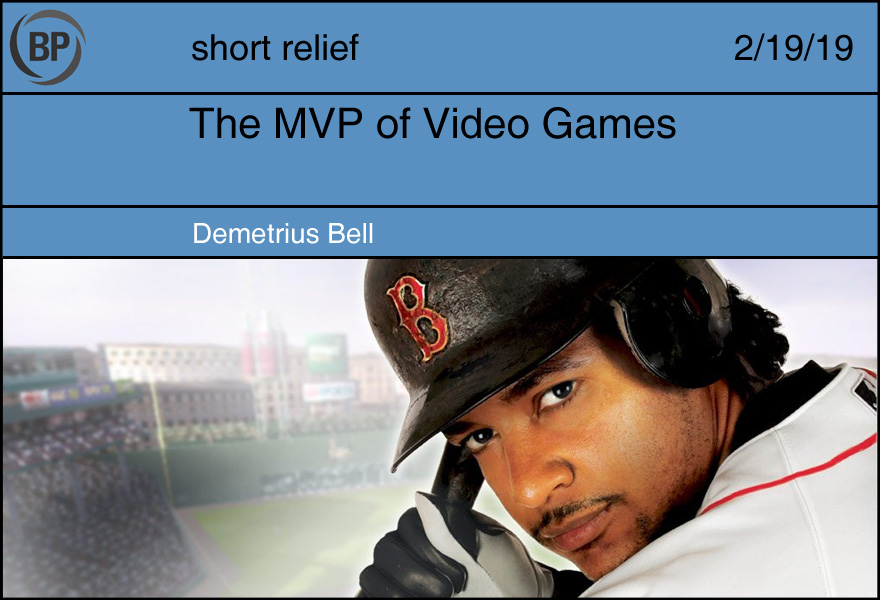 This offseason has been moving at such a glacial pace that conversation-starters on Twitter such as this one from Andy Carlson have turned into hot topics during this not-so-hot stove season. In case you don’t feel like clicking the link, Carlson is asking what the best video game of all-time is, and he suggested that it’s Madden NFL 2004. In my opinion, that’s not even the best game that EA Sports has published. That honor should go to MVP Baseball 2005.

I’ve also had the pleasant experience of playing every edition of Ken Griffey Jr. games that Nintendo blessed us with during the mid-1990s. I spent multiple summers during my childhood playing out entire 162-game seasons on these games and I only stopped to watch actual baseball on TV. Even though two games arrived during that awkward transition to 3D, they were still so much fun to play.

Despite these second thoughts and the power of nostalgia favoring most of these older games that I’ve experienced, I can still say that MVP Baseball 2005 is still the best of the bunch. It’s a game that was truly ahead of its time in every single facet while also managing to make the best of what gave the preceding baseball games the quality that they had. It was a celebration of baseball that succeeded on multiple levels.

If you’re a uniform nerd, then you were in heaven with all of the throwbacks and alternates that were available to use. If seeing ballparks in all of their virtual splendor was your thing, then you got to see every single stadium faithfully recreated. If running a baseball organization was your cup of tea, then you got the opportunity to control any baseball franchise you wanted and dictate everything that went on. You even got to control (and play as) the minor league teams, which was just too much realism for my then-teenage brain to handle.

What really made this game shine was the core of any baseball game, which is the gameplay. It’s easy enough to pick up that an RBI Baseball veteran could enjoy it, while multi-faceted enough to where someone who’s used to The Show could enjoy it as well. MVP Baseball 2005 may have given you Jon Dowd instead of Barry Bonds but it gave you everything that you could possibly want in not just a baseball game, but video games as a whole. That’s why it’s the gold standard. 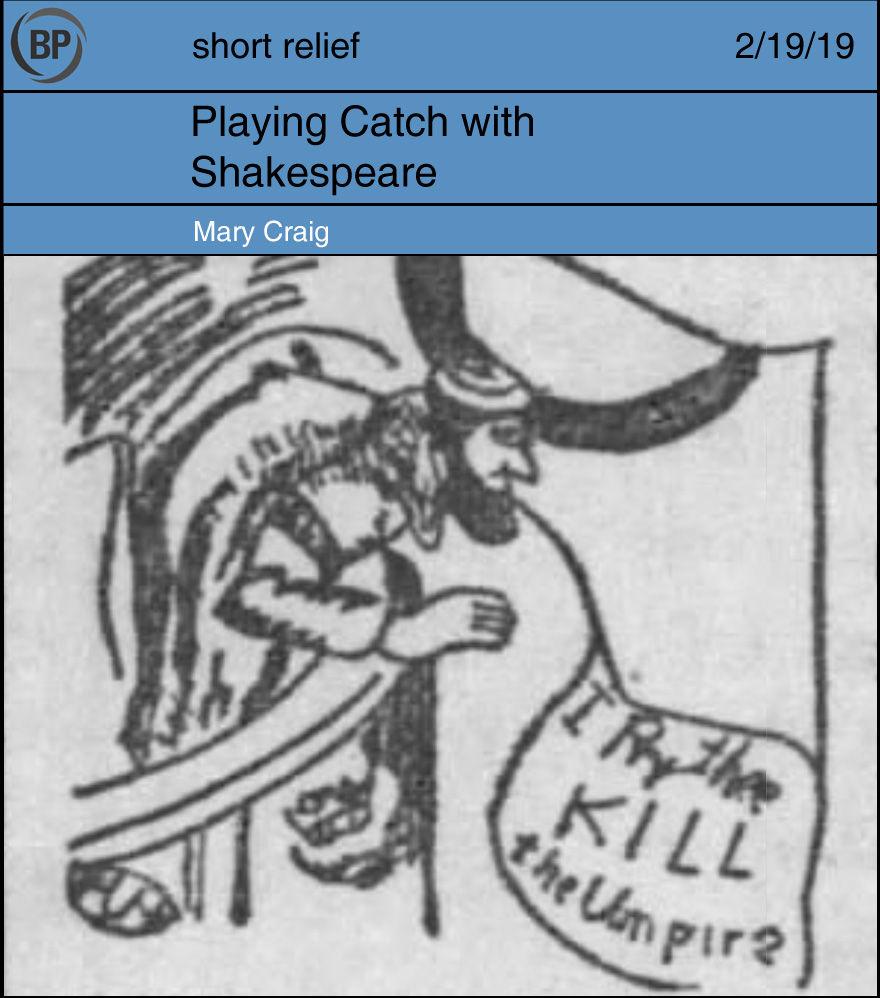 William Shakespeare is widely regarded as one of the greatest authors in the English language, inventing words and stories that have formed the basis of much of modern day literature. All of this is perhaps something that is common knowledge to most everyone, I’m sure. What is less common—virtually unknown—is that Shakespeare invented baseball.

This discovery was made by Mr. James J. Clancy, journalist for the New York World, who spent countless hours poring over the text of King Lear. Through a rigorous system, Mr. Clancy stripped away the extraneous text to reveal the hidden meaning of the play contained within a series of seemingly disconnected lines:

Striving to better, oft we mar what’s well.
With base? with baseness? bastardy? base, base?
now thou art an O without a figure
The best and soundest of his time had been but rash
You see how full of changes his age is; the
observation we have made of it hath not been little:
He always loved our Majesty most; and
with what poor judgment he hath now cast her off
appears too grossly.
It is no vicious blot, murder, or foulness,
No unchaste action, or dishonour’d step,
That hath deprived me of your grace and favour;

Not wanting to give away all his secrets before monetizing them, Mr. Clancy does not offer an explanation of this hodgepodge of lines. To any enlightened Shakespeare scholar, it should be self-evident. Clearly when combined with the fact that the word “base” appears in the play a dozen times, Shakespeare could have nothing in mind but foreshadowing the invention of the game.

We know that Shakespeare was in many ways a man who transcended time, a man whose brilliance we may still fail to grasp. If this baseball hypothesis is correct, it may be time to re-visit each of his works, piecing them together bit by bit to reveal a key to the future. Perhaps Macbeth is not about a power thirsty king but rather drone racing (Whither should I fly?/There is nor flying hence nor tarrying here). Maybe in reading Twelfth Night, one should set aside Viola and Sebastian in favor of finding the seeds of hate-following (observe him, for the love of mockery).

Do not let the conventions of history and reason inhibit your search for the truth. Follow in Mr. Clancy’s footsteps. Pick up your Shakespeare anthologies and see the future.