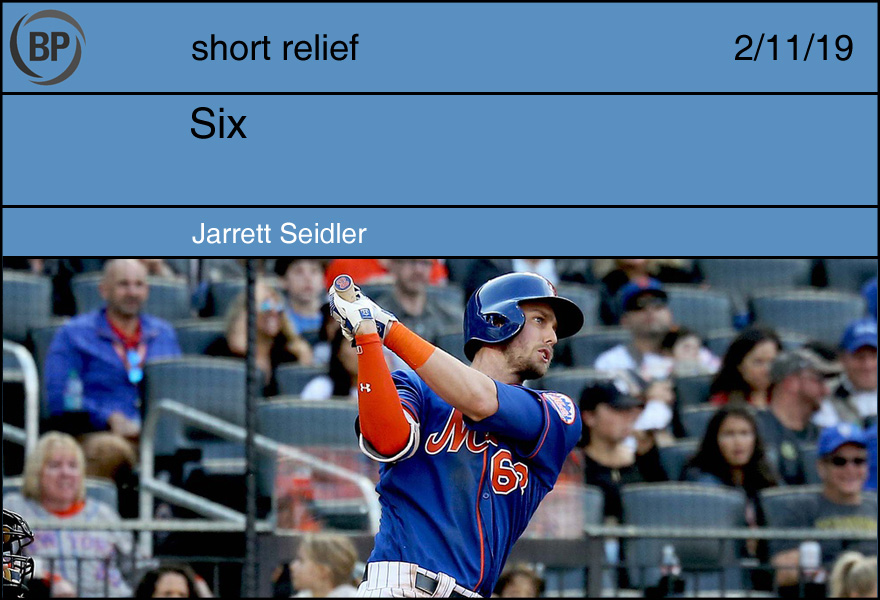 I am BP’s senior prospect writer. In that role, I must be able to give objective evaluations of players, without biases conscious or subconscious. These evaluations aren’t always positive, but it’s really fun when you find a dude that nobody else is on and he turns out to be pretty good. This is one of those stories.

I am also a diehard New York Mets fan. I am a partial season ticket holder even though I live far enough away to make it a fantastic hassle, almost a full day trip, to get to games. I go to 20-plus a year anyway. I think if you asked anyone who knows my work product, if anything I am a bit harder on the Mets than I am other teams. Every now and again someone will ask me how I can be a baseball fan but also an analyst and writer. I simply don’t know any other way.

Jeff McNeil started crushing the ball early in 2018 as a 26-year-old utility infield prospect for the Double-A Binghamton Rumble Ponies. I always liked Jeff McNeil a little as a prospect. He was a good athlete from a strange background—a high-level junior golfer who didn’t really pick up baseball until late in high school—and he’d always shown really good feel for the bat. But he’d had a long string of injuries that caused his stock to tumble, and had passed through the Rule 5 Draft the prior offseason. More than anything, a 26-year-old utility infield prospect really just isn’t a prospect.

Binghamton came to Trenton in early-June, and I sat on the series. It became clear to me within a half-game that McNeil was actually breaking out huge for real. I went so far to project him as a role 6 potential prospect, which in our parlance is a good first-division regular and a potential All-Star. This was a completely, utterly absurd suggestion given his background, enough that I limited it to our podcast and social media instead of filing an Eyewitness on it. I think everyone I knew just wanted me to shut up about it because I was right on the border of making an idiot out of myself. Most OFP 60s make our Top 101, and here I was throwing it on a severely overage utility guy of little renown. But I deeply believed in the hitting ability.

Because it was such an absurd suggestion, the idea of Jeff McNeil as a role 6 quickly became a meme in Mets fandom. To some, Jeff McNeil is just now “Six.” I occasionally call him that myself. It’s not official enough to be listed on Baseball Reference, but it’s not far off either.

The thing is, the notion of McNeil as a good MLB regular very quickly became less absurd. He was promoted to Triple-A shortly after I saw him, and demolished that level too. He hit .329 over the last third of the season in the majors, showing off elite contact abilities that made a believer out of far more people than just me. He is penciled in for a major superutility role in 2019, if he doesn’t land as an everyday outfielder instead.

When he was called up to the majors, McNeil was given the jersey number 68, befitting his status as a fringe player. Sometimes players keep their weird call-up numbers as a reminder of where they came from. More often, they find a cool new number.

The Mets announced Jeff McNeil’s new number on Friday. He switched to 6. 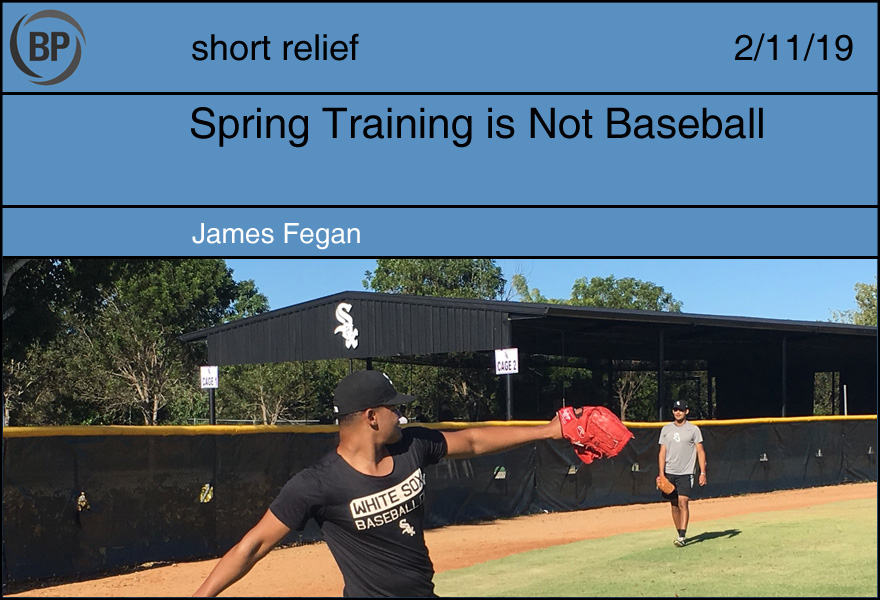 Next week’s arrival of the school-fundraiser-flavored-orange-drink of baseball will surely be hailed as the return of baseball–the pop of the mitt, the smell of the synthetic grass-like playing surface!–but it is a false liferaft amid a sea of boredom and unwanted college football recruiting updates. The first two weeks of workouts is literally just stuff all the players have been doing on their own. They’re athletes–they work out all the time. Pitchers play catch everyday. A corporate-mandated appearance deadline is not the spring equinox.

The potential absence of elite players Manny Machado and Bryce Harper from spring training, the ground beef of the spaghetti bolognese that is baseball, threatens to expose the fraud that this is any sort of celebrated beginning, but alas, an empty, transparent illusion of salvation is still preferable to very overt desolation. It’s still spaghetti, after all, and for the type of person hopelessly in love with the sport enough to read the existential wing of a subscription baseball site, it will have to do, and beats the creeping dread of the financial and competitive ruin of the sport.

Like eating multiple tubes of cookie dough in one night, no other major sport romanticizes practicing incessantly for two months on end, to the point of making it its own industry. Surely part of the appeal of baseball is being the chillwave of sports, enveloping the viewer in a vibe of relaxation and the essence of summer. But just like I know sodium-conscious beat writers who just eat the bun instead of press box hot dogs, this is consumable, but not the whole package, and it’d be a lot more reasonable to have everything or nothing.

Maybe I’m just hungry, and this entire rant and its decreasing focus is the illustration of the spiral of brain function as blood sugar plummets, but baseball’s leisurely pace is counterbalanced by the stealth-like raising of stakes over the course of a game, a season that crescendos as soon as you realizing it’s even been raising at all. Without those stakes, it just lilts. The paradise of summer retreat loses meaning without the knowledge of its mortality and impermanence.

Spring training is nothing if not meaningless and incredibly long. The writers and fans always bring up the latter, the players often mention both. Yet somehow we forget every year, enough that I think I wrote this post last year, thinking it would be better this time for no real reason at all. Instead that was quickly proven wrong, and it just kept going long after I realized my mistake. And on that note, here comes spring training again. 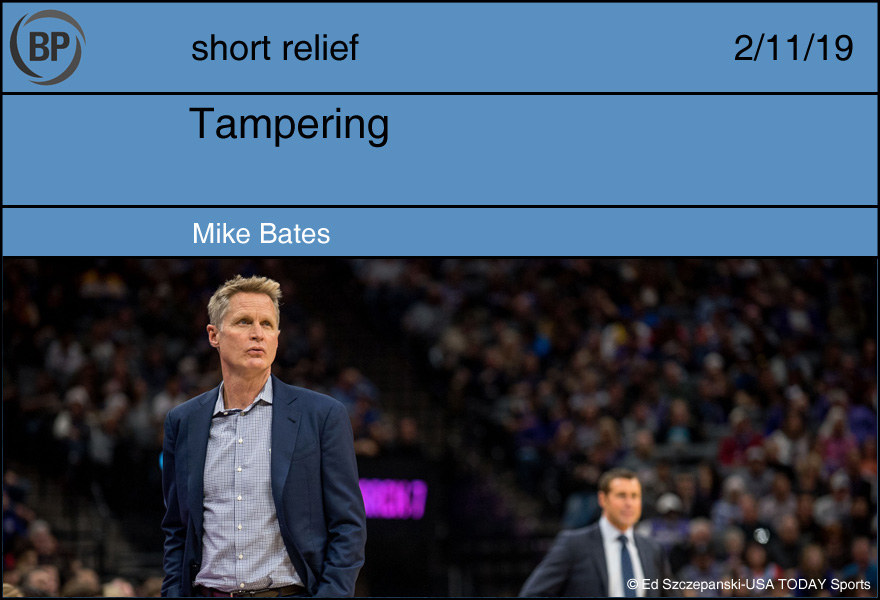 Reader, normally on the proverbial eve of Spring Training, we take a moment to marvel at how close warmer weather feels and revel in the belief that, with the start of a new season, everyone has reset. Every team has a fair shot at a pennant. Every batter can hit .300 and every pitcher can win 20. Hope springs eternal.

Of course, that’s not the world in which we find ourselves now. The two biggest free agent prizes anyone has gotten to bid on since Jason Heyward (remember what a catch he was supposed to be?) are still unsigned, as is the top starting pitcher on the market, Dallas Keuchel. Hell, even Marwin Gonzalez doesn’t have a home yet. There has been some movement, with the White Sox leaking the contents of their offer to Machado, and the Giants trying to get Harper on a short term deal, but the wheels of commerce seem to have ground to an unsatisfying halt.

So in the spirit of frustration with MLB and its attendant teams’ bullshit, let us help the league by recounting the problems with this unfortunate and unfunny tweet helpfully provided by the official account of Major League Baseball, and let us, so as not to be passive-aggressive, address our complaints directly to them:

First and foremost, @MLB, this tweet is inaccurate. Bryce Harper is unsigned, which means, by definition, no one can “tamper” with him. Tampering rules exist solely to prevent clubs from interfering with players on other teams’ rosters. Because none of your dipshit GMs and owners think that Bryce Harper is a good investment in which to put your 10 billion collective dollars in 2018 revenue, he is not (as we’ve previously discussed) on anyone’s roster. This friendly basketball man is as welcome to lobby Bryce Harper to join the Giants as he is to lobby any other private citizen, say star of The Rookie Randy Quaid for instance, not under contract to a major league club.

Also, even in jest, it doesn’t seem very cool for you, the official account of MLB, to be be doing things that would discourage one of your biggest stars from signing a contract with one of its teams. Especially, as we’ve noted, everyone seems to have simultaneously conveniently magically misplaced their wallets.

And don’t be a narc, Major League Baseball. Few enough people like you as is. If I hadn’t already invested 32 years and thousands of dollars into our relationship, I sometimes wonder if I’d be a fan today. You’ve become an unlikable killjoy. And I’m starting to wonder if you’re trying to sabotage our relationship, like you’re trying to keep Bryce Harper and the Giants apart.

But it’s the eve of Spring Training, and I’m going to give you another chance. To look inward and decide who and what you want to be. I’m going to let you try to save us. I still have hope that you’ll get your shit together. And if not, that basketball man seems handsome and fun and nice. He and the NBA could tamper with me any day. Maybe you could introduce us.