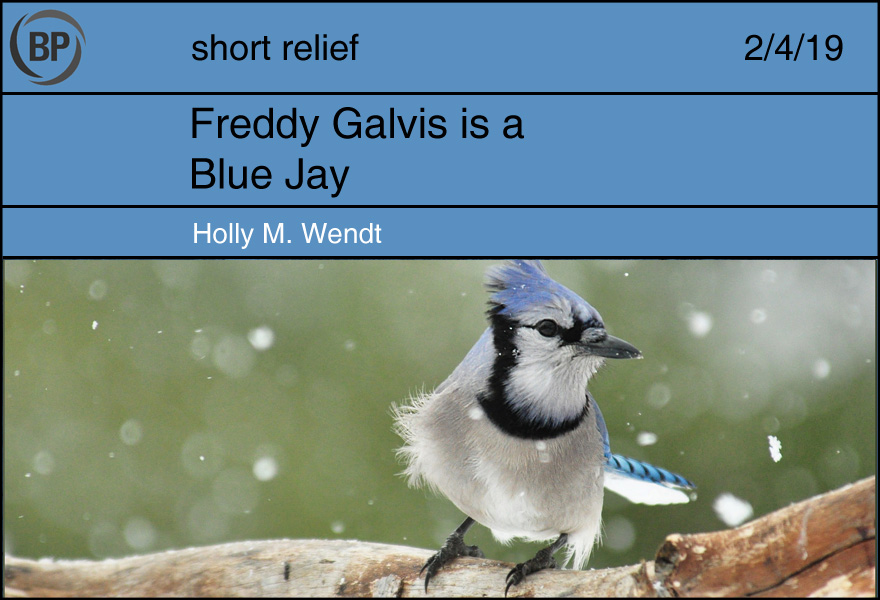 The blue jay is a member of the family Corvidae, to which crows also belong. Though tool use is not especially noted in blue jays, they can use their feet and beaks dexterously to open seeds, and their crow cousins are highly adept at using various tools to solve problems and obtain rewards, like food and shiny objects.

Despite playing 162 games in both the 2017 and 2018 seasons, Freddy Galvis made only 7 and 9 errors in those seasons respectively, demonstrating particular skill with his hands, feet, and a cowhide baseball mitt in obtaining outs. Thus far, thanks to offensive production bias in an ostensibly defensive award category, Galvis has not been a Gold Glove recipient.

The blue jay is a bird that will cooperate with its fellows to protect resources and to drive away birds of prey, such as hawks and owls.

Since his MLB debut in 2012, Freddy Galvis has collaborated on 433 double plays.

The blue jay is a passerine, which is to say a bird that perches.

Freddy Galvis has been known to alight, for the briefest of moments, on the outfield’s delicate green ledge, before taking flight in pursuit of a line drive in the hole.

Blue jays are found most reliably on the eastern side of the Continental Divide, between northern Alberta and the US-Mexico border.

Freddy Galvis, who hails from Punto Fijo, Venezuela, had been found, reliably, for a time, in Philadelphia and, reliably, on additional baseball infields across Major League Baseball, since 2015.

Freddy Galvis goes by the nickname Toco, which was given to him by his brother. “Vitamin,” despite Pete Mackanin’s professed efforts, did not stick.

The blue jay is a bird of uncertain migratory habits. Some blue jays will overwinter one year in a single place and migrate south the next. Researchers are uncertain of the birds’ reasons for doing so.

Freddy Galvis’s deal in Toronto is for one year, though the contract contains an option for 2020. 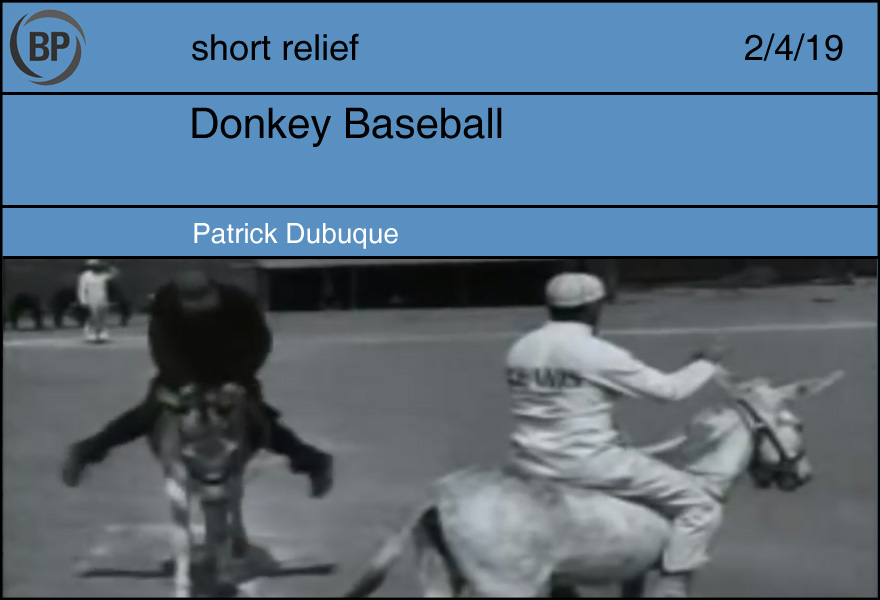 In 1935, MGM Studios produced an eight-minute black-and-white short film entitled “Donkey Baseball.” One would assume, for both the writer and reader of this article, that such a discovery in the dark days of early February would be a godsend. It is not that.

Donkey Baseball is not a terrible sliver of cinema. It is certainly not a good one. It defies, as a creative work, any attempt to formulate an opinion about it. The film is pleasantly grainy and the actors pleasantly wooden. The action is edited more competently than one would expect. The script is stippled with joke-like material, narrated in an obvious caricature of Groucho Marx’s Bronx accent, as if the audience will accidentally laugh at the same beats. It’s a hard eight minutes to get through.

And there are donkeys, of course. The donkeys are the stars of the film, and it’s strange to watch them, because they, unlike the players (who pitch underhand and play gloveless) are timeless: a donkey of 1935 is a donkey of 2035. The entire foundation for the humor of the movie, and of the sport, is that the animals are unpredictable; at random times, they just stop. It’s not satisfying for a sport, but theoretically good for a cheap laugh. The film fails in 2019 because the real satire has dissolved: that the men and the donkeys are identical, that they are each less than human, bound by artificial constraints and robbed of their free will. We are all donkeys, all self-defeating and stubborn and bound by artificial rules and baselines. But the men we see on the camera are no longer us, and the line is broken. Everything grows too old.

Perhaps the only thing I find interesting is a name on the title card: John Waters. Not that John Waters, but the first one, a man who arrived in Hollywood when it was barely Hollywood and spent four decades working, mostly uncredited, as an assistant director. In the late twenties Waters was allowed ten feature films to direct, including some of Gary Cooper’s early work, none of it terrible or good. Once that contract was up, he returned to anonymity for thirty years.

There’s perhaps no better example of the minor league lifer than John Waters, who only got two on-screen film credits after the age of 36. Donkey Baseball is one of them. He worked until he became too sick to work, right around retirement age, and then died. There’s only one other fact remembered about him: he won an Academy Award, for Best Assistant Director, for a film he didn’t have his name on. They stopped handing out the award a few years later because no one, except the recipients, cared. It’s not hard to watch Donkey Baseball and come away equally indifferent. But I’m glad it’s still there, a foil to greatness just as donkeys are a foil to men. Because most of us root for heroes, even though most of us are John Waters, the other one.