The Names of the Game

A side-effect, perhaps an ancillary benefit if I’m feeling generous, of watching baseball almost every day for decades is the depth to which one can at least pretend to know its players. Their numbers, their trends, their quirks, their habits, and on. Through a daily, somewhat creepy, Truman Show-esque surveillance we learn baseball players as well as we can know someone we have no personal experience with. We take hundreds of scattered, small slices of them; a TAv here, a DRA there, Nomar Garciaparra forever unstrapping, and restrapping his batting gloves, Rickey Henderson’s nervous tap of glove to thigh before catching a flyball. We collect these data points and behavioral ticks and store them in our brains using the easiest cataloguing system we have: Their names.

For a few players, this system is well-suited. Dustin Pedroia is a player who looks and plays exactly has his name connotes. He is short (all Dustins are short), and Pedroia contains within its seven letters all the unexpected punch, and drunken-master style grace that defines the Red Sox second baseman.

There are a few other scant cases of name and player aligning correctly. What else is a tall man-god with flowing blonde hair and a 95 MPH slider but Noah Syndergaard? What other name could a smiling, charismatic, switch-hitting, hall of fame bound shortstop be known by but Francisco Lindor? Mike Napoli sounds like shirtless bowling pin with the beard, and so he is. Perhaps most famously, every molecule of personhood belonging to the man named Tuffy Gosewich is accurately summed up by that set of vowels and consonants.

The majority of baseball players, however, are woefully ill fit to their name. After watching his painfully short and excruciatingly long start against Cleveland on Sunday, I can say with confidence that Chase De Jong is not nearly exciting enough for his name. A pitcher with a 91 MPH fastball and show me curveball, with borderline big league command of either, is a Bob through and through. As such Chase De Jong’s exaggerated wind up, his head whipping up and to the left as another ball heads perilously fenceward, are now the properties of Mariners pitcher “Bob Wockenfuss”.

Chase is not alone, of course. Jedd Gyorko gets his first name almost right, but adds an extra, superfluous “d”. His last name is Jenson. Evan Longoria has always been a Brad, although his last name has thus far escaped me. Mike is the name of a pizza delivery boy, and unfit to adorn the greatest player alive. As such Mike Trout is heretofore known as Talfryn Blast.

My favorite players are the ones who recognize the ill-suited nature of their given names, and find their own themselves. Nyjer Morgan famously renamed himself “Tony Plush”, and even did interviews as his alter ego after games. It may seem unlikely, but we can hold out hope that Kyle Seager finds the Howard Tensler within.

There are too many Seagers, anyway.

I am not unfamiliar with Wade-LeBlanc-inspired poetry so trust me when I say that his Brooks Baseball page has a melancholy lyricism to it. It is Philip Larkin at his most uneasy, but actually generated by a computer program.

Now when it is written that his slider is basically never swung at and missed, that is only because the computer program could not conceive that that pitch would never be swing at and missed. But no one has swung and missed at LeBlanc’s slider or curve. He has one whiff out of 53 cutters. For the entire season he has generated 13 swinging strikes. These are the kind of results that generate hand-wringing columns about the death of sabermetrics.

Wade LeBlanc is waging a one-man crusade against ballooning pace-of-play. He doesn’t strike a lot of guys out. He doesn’t walk many. He’s run low BABIPs since his 2016 return to the majors. He does give up a few home runs, but only the most impatient viewers would complain about a few extra dingers. His outs are quicks, his mistakes go far. He is the closest thing we have to a 19th century pitcher—a ceremonial figurehead in a flat cap and cravat, meant to introduce the ball into play as quickly as possible, the plunger on a pinball machine.

Then he faced Javy Baez, a man who stands—in all ways—in diametric opposition to Wade LeBlanc. This is not a morality play, a reductive battle of good versus evil. Rather, it is more akin to interactions in particle physics phenomenology. 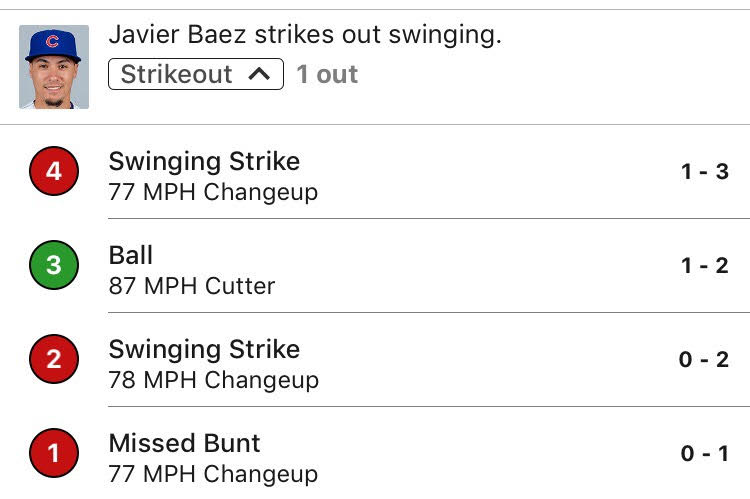 I’m not joking about either part. It’s a $50,000 dollar buyout that FanGraphs rounds down to “$0M” under his contract section—enough for a base model Volvo V90 wagon. The Wade LeBlanc of automobiles, perhaps? Both are a little odd to look at, though only one allegedly features “stunning Scandinavian design.” Of course at this rate, he may get that seven-figure option picked up. That’s not Volvo V90 money. That’s…25…Volvo V90s…money.

The boy traversed the field toward home. The sun burned low in the sky at his back, haloing him, from one view, in a blood-red light. He wasn't late yet, but he wasn't on time, either. He should have been back; he was due.

This is what made the sudden appearance of the gully in front of him so problematic. It hadn't been there before. Before now, before today, before last week—before. It was there now, though, and it was between the boy and home.

Also now there: a log spanning the gulf. The boy nudged it with his foot—anchored solidly enough in the dirt. He pushed it harder—no movement. He knocked on it, listened for hollowness, rot, any feeling that it might not bear weight. It was, as sudden logs across a sudden gully go, as stable as one could hope.

The boy started across the log. The air was still, the sun still at his back. The weather had been dry. He glanced down once, just enough to know that a fall from the log would be the end, but the footing was so sure, the conditions so clear, that he was able to push doubts from his mind. He continued across the log at a fair pace. He was due home.

And for some reason, that's what got the boy's back up. A bully, big and mean and ugly, with a big, mean, ugly voice giving a big, mean, ugly order would have been simple to give into. Just do what he wants and get it over with. But this.

The boy did move, just not the way the taller boy required. A step forward, not back. Then another step. No more than an arm's length between them.

"Move," said the taller boy, with no change in volume or emotion. A perfect copy, an exact replica of the last time.

The boy moved. A step forward, a fist raised, cocked, thrown. The taller boy fell, wordlessly, soundlessly, unblinkingly, ungraspingly. The boy watched him fall, and fall. The taller boy did not tumble, did not spin; he simply fell, the lighter hair ruffling, the piercing green eyes (how had the boy not seen the eyes) open, awake, seeing, staring.

The taller boy was gone. The log: gone. The gully: gone.

The boy, mind blank but chest tight, traversed the field toward home.

"Ray, where have you been?"

Volvos are *supposed* to be boxy, dammit.
Reply to LlarryA
jpaternostro
Preaching to the choir, the pre-Ford Volvo wagons were both square and cool.
Reply to jpaternostro
jfranco77
Mike Trout needs to ditch the name altogether and just go by The Weatherman at all times.
Reply to jfranco77
rwmiller98
A buffet of information and fantasy. Thanks for providing such variety on your page.