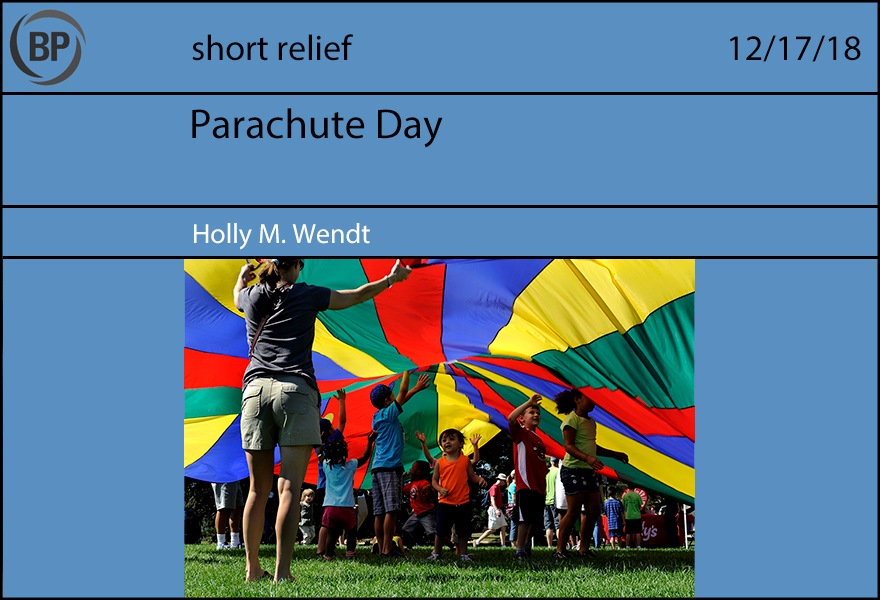 The thing about parachute day was that you never knew it was coming. An elementary school gym class would simply arrive to the boxy combination gymnasium/auditorium and there it would be: a massive circle of silk as bright as a circus tent, making even the glare from the industrial fluorescent lights in their basketball-proof wire cages look warm. And the children—oh, the children would go bonkers.

Or at least I did. Parachute day was my favorite day in gym class, which was somewhat strange. I loved competitions and I’d had my last growth spurts early. In elementary school, I was tall and fast and took pleasure in keeping score. But there was no competition in parachute day. There weren’t really even games.

What did we do with it? Notably, the class would ring its sleeping form and each set of small hands would take up an edge, evenly spaced. Together, we lifted it up. Together, we put it down. And then, together, we shook that sectioned silk like hell. Billowing hills and soft valleys arced and the fabric spoke its hush and whisper. Then Mr. W tossed a tennis ball onto the surface. The ball leapt and arced, though I don’t remember us trying particularly hard to do anything with the ball—either to keep it on the parachute or buck it off. The pleasure was simpler: yellow ball, bouncing; purple and red cloth, shimmering. Then he poured a whole bucket of tennis balls onto the surface and the point was popcorn, if popcorn can be a point.

I don’t know how a parachute ended up in gym classes, though apparently it’s a common thing, and no one ever explained where the concept came from or who first cut away all of the cords and straps that would make a parachute complete its proper function and then gave the thing to kids.

Why am I thinking about this now? I suppose it’s because it’s winter, and parachute day always happened in the winter, or because it’s the holiday season and nothing, in the parameters of gym class, was more festive than parachute day. It wasn’t framed as a holiday treat, though. It felt more arbitrary: whenever the consecutive days of sleet were too many, whenever indoor kickball went stale, whenever dodgeball took on a caged and biting snap. We didn’t play baseball or softball in gym class, not until fifth grade; I don’t think we even hit off tees, though it would have been a perfect activity for those cold, shut-in days. There was some wiffleball, though not very often; the balls cracked too easily, the bats bent. But maybe we could have imagined the lights we had as something else, as big stadium banks left, right, and center. The rules for hitting the ceiling, what was playable and not, were easy enough to devise. But the big square space never tempted me to think dome or stadium or anything so magical. No, that happened only on parachute day, on the last thing—always the last thing—we did with it.

With the all the coordination we could muster, we heaved the parachute up and, with the particolored bowl above us, we turned and slipped beneath it, each sitting on their edge to trap the air. I remember no tranquility better than this as a child: soft, multicolored light, the experience sweeter because it couldn’t last, the unexpected hush that came over us. And I remember the disappointment after: once parachute day had happened, it wouldn’t happen again that year. Like Christmas, or like the day your favorite baseball team makes a move that prompts you to think this is it; this is the one we’ve been waiting for.

In the chill damp of the offseason, though, it’s impossible to know when that day is coming, but, unlike parachute day, there might be the hope that it could happen more than once. 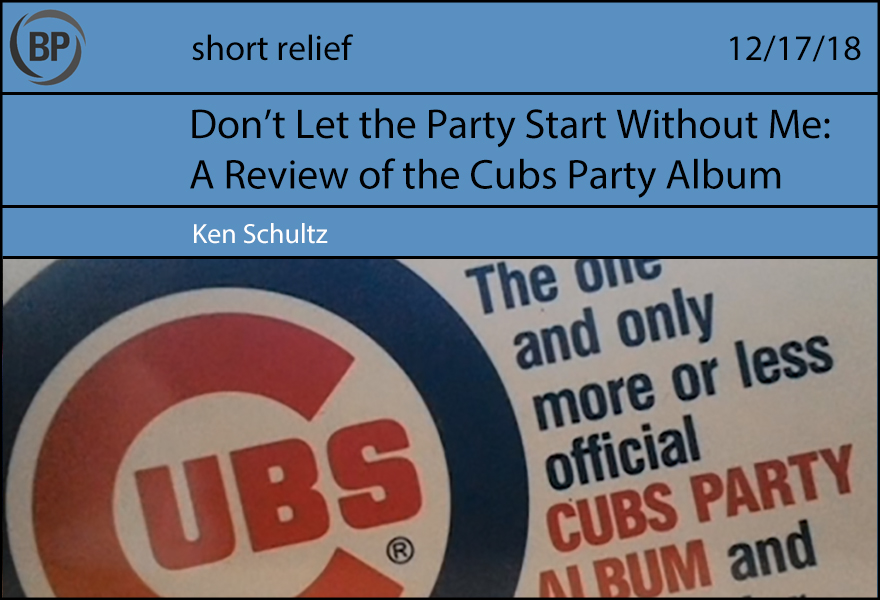 If you want to understand who I was a kid back in the 1980s, all you need to know is this: at a time when my peers were debating the merits of Guns ‘n Roses’ Appetite for Destruction vs. Metallica’s …And Justice For All, my favorite cassette was The WGN Radio Cubs Party Album. Because who needs friends when you can spend 162 days watching Jamie Moyer?

Last summer, I discovered to my great delight that someone had uploaded the soundtrack to my youth onto Youtube. So let’s take a look back at the tracks that I played on my stereo every day from 1987 onward…

“Hey Hey, Holy Mackerel:” (1:46) The theme song of the 1969 Cubs repeatedly proclaims “The Cubs are on their way!” Unfortunately, the lesson that year was “If you don’t specify where, the Cubs will assume you mean second place.” In the cruelest of ironies, this song played in Chicago past the end of September. The Cubs didn’t.

“Men in Blue:” (3:46) In the magical season of 1984, several members of the Cubs recorded a song about winning the championship. And the result sounded like the answer to the question: “What if you made the entire ‘Super Bowl Shuffle’ out of the verse where the back-up quarterback tries to rap?”

The anthem’s nadir is the moment where Leon Durham sings “There’s been a lot of talk about the lights at Wrigley Park…” Making this the first fight song in sports history where a player forgets the name of his own stadium. There can be only one explanation. “Men in Blue” was written by Jeff Gordon.

“Here Come the Cubs:” (8:37) In the mid-80s, The Beach Boys kicked Brian Wilson out of the band and added John Stamos. Then they recorded this song in 1987 to make that trade look like the highlight of the decade.

The jingle begins by replacing the lyrics to “Barbara Ann” with “Cubs, Cubs, Cubs, Here come the Cubs…” So it was appropriate that a song about desperately trying to get to first base would be re-written for a team that gave 121 plate appearances to Chico Walker.

Even if you included “Kokomo,” this had to be the single worst thing The Beach Boys had ever done…

“Go Cubs Go:” (12:47) A while back, Rolling Stone attempted to compile The 500 Greatest Songs of All Time. Thousands upon thousands of words were spilled trying to determine a definitive ranking of masterworks by Prince, The Beatles, Aretha, Dylan, and Springsteen when all they needed to say was this…

Once the Wrigley Field sound system plays “Go Cubs Go,” nothing bad will happen for the rest of the day. 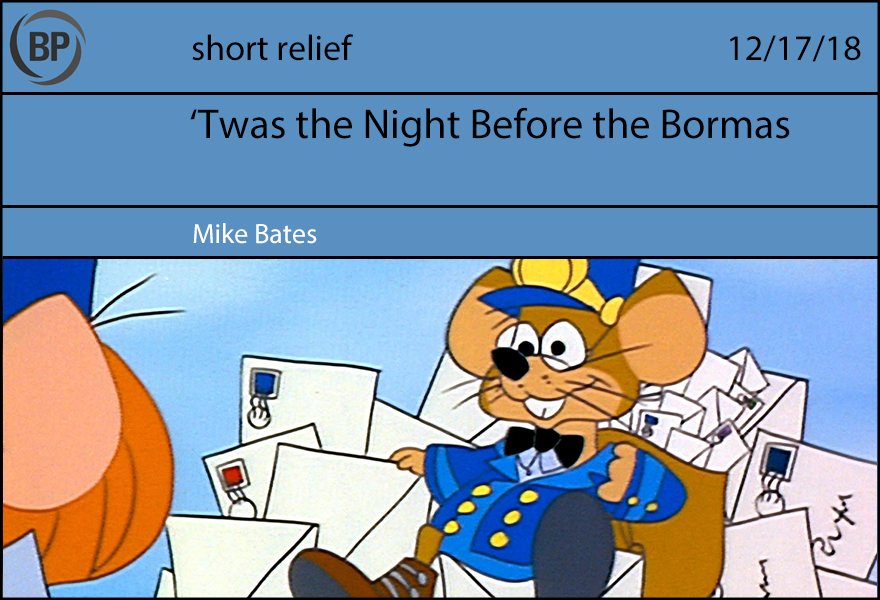 You need to be logged in to comment. Login or Subscribe
Pat Folz
Good thing you explained that "Here Come The Cubs" goes like "Barbara Ann," because I immediately was thinking of Wagner's 'Bridal Chorus' - "Here come the Cubs, Dressed all in blue..."
Reply to Pat