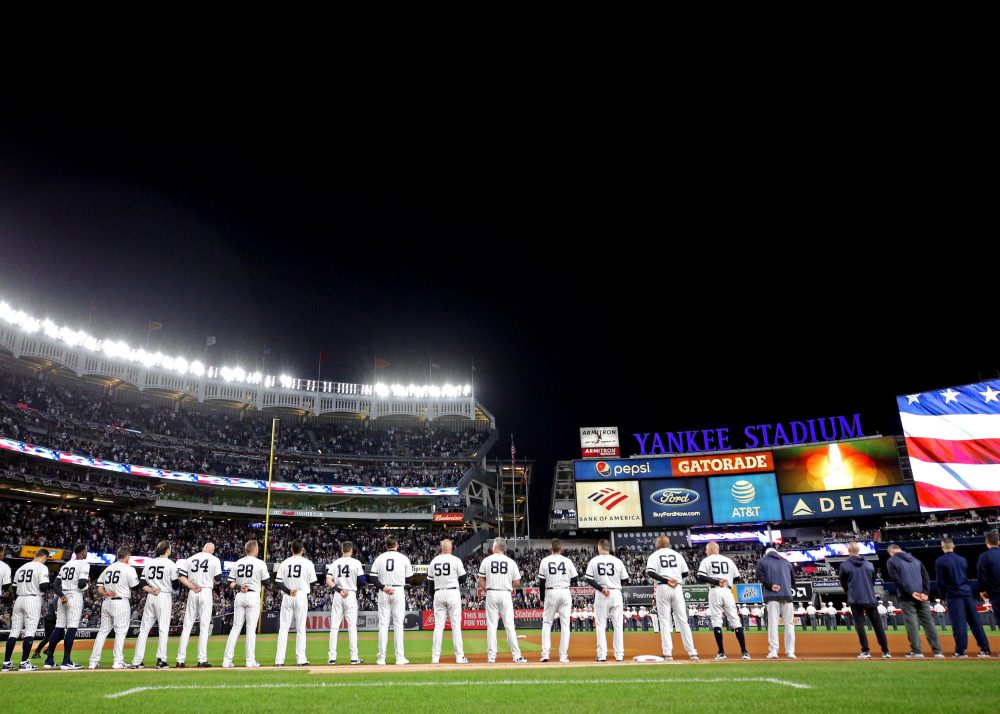 In March, MLB commissioner Rob Manfred went on TV and said he wanted baseball to be part of America’s “return to normalcy” when the coronavirus pandemic subsides. A few weeks later, MLB super-agent Scott Boras said almost exactly the same thing in the New York Times.

“In some of America’s darkest moments, the country has turned to Major League Baseball to bring hope and normalcy back to everyday life,” Boras wrote, doing a pretty decent impression of James Earl Jones in Field of Dreams.

If you need evidence that these are extraordinary times—well there you have it. Manfred and Boras are arguably the two most powerful men in the sport. They are the Yin and Yang of the Baseball Industrial Complex. Manfred serves the sport’s ownership class, and Boras makes a living out of extracting giant free-agent contracts from those very owners.

But Manfred and Boras also have a lot in common: they both benefit when the business of baseball is thriving. And they are both tapping into a tradition as long and storied as the sport itself: baseball’s boosters disingenuously declaring it to be a special and indeed necessary force in American life, and also one where they should be able to make a little cash in the process.

In the coming days we are going to hear a lot of very loud voices declaring that the MLB Players Association must acquiesce to a deal slashing their negotiated contracts beyond previous prorated amounts—and potentially risking their lives and their families’ lives—so we can consume baseball immediately. To do otherwise would be to risk damaging the sport permanently. “It’s time to save baseball before it’s too late,” wrote Bob Nightengale in USA Today.

The subtext, of course, is that by saving baseball, we are saving a piece of America. This is a good reminder that the national pastime isn’t really baseball: It’s baseball reminding you that baseball is the national pastime. The product MLB is selling is nostalgia, and its targets aren’t the players, but the audience. For more than a century, the lords of the sport have used nostalgia to extract concessions from everybody but themselves: fans, players, and all levels of government. They have done it by declaring the sport vital, and subsequently warning that it is on the verge of extinction. They are messing with our baseball-loving hearts!

This pattern goes all the way back. The sport’s popular creation myth—that it was invented by war hero Abner Doubleday in Cooperstown, NY—was a marketing ploy by sporting goods manufacturer A.G. Spalding who wrote, years before his Mills Commission anointed Doubleday the inventor of baseball, that “Our good Old American game of baseball must have an American Dad.” At the time, Spalding was worried that the sport would lose popularity to up-and-coming sports like cycling. (For more on this, please read John Thorne’s Baseball in the Garden of Eden).

Baseball owes a great deal of its growth as a business to special treatment by the United States government—specifically an antitrust exemption that was cemented by the Supreme Court in 1922 and still stands today. In 1970, when outfielder Curt Flood sued to end this exemption, the Supreme Court upheld it not because of its legal soundness (the antitrust exemption does not extend to other sports and is pretty obviously unsound) but literally because of “baseball’s unique characteristics and needs.”

In his majority opinion, Justice Harry Blackmun wrote poetically about baseball legends like Old Hoss Radbourn and Big Ed Delahantey in old-timey prose. He cited Casey at the Bat. That’s all well and good. But does it actually make sense? Justice William O. Douglas did not think so. In his dissent he wrote that “Only a romantic view of a rather dismal business account over the last 50 years” would justify maintaining the antitrust exemption.

Douglas was right. And when held up to the light, we know that the romantic view of baseball propagated by the present-day Albert Spaldings is as manufactured as the hot dogs we eat at tax-payer funded ballparks.

As Max Scherzer recently noted, MLB owners have a long history of crying poor to the public and the players while also refusing to open their books. This phenomenon—and a recent lowball offer by team owners—has led the very tenuous alliance between Manfred and Boras to fray. In an email to his clients, Boras wrote that “players should not agree to further cuts to bail out the owners.”

We should all listen to Boras, because (this time) he’s right. It’s important that before we bend over backward to offer baseball owners the thousands of COVID-19 tests and other public resources it will take to re-start some version of the sport, and before we take their side in the sport’s nascent labor war, we remember some facts about baseball’s recent history:

In the last decade, baseball games have gotten more expensive. Ticket prices have increased—and alongside them, so have brokerage and handling fees.

Ballgames have become harder to watch on TV as owners have cashed checks and partnered with cable providers, making local games nearly inaccessible unless you are willing to cough up the cost of a cable bundle that also includes a bunch of crap you don’t want. Meanwhile, MLB.tv, the league’s wonderful streaming service, is still plagued by draconian and nonsensical local blackouts. (For example, fans in Anchorage, Alaska, are restricted from streaming Seattle Mariners games more than 2,000 miles away.)

Front offices have begun to operate more and more like consulting firms, hoping to extract the most resources at the lowest possible cost: this has led to some fascinating developments in how the game is played, like the recent rise of home runs and strikeouts (though how much you enjoy that is debatable). It has also led to amoral (at best) behavior like front-office sponsored sign-stealing schemes—and to the general phenomenon of everybody treating players, who are human beings last time I checked, as mere collections of statistics.

Even before the pandemic, MLB was floating a proposal that would extinguish 42 minor league teams—literally tearing up the sport from its roots. (The minors are bad business; and who needs ‘em when you can genetically engineer pitchers throwing 100 mph in laboratories anyway?)

Since the pandemic, the league has apparently doubled down on its commitment to not develop players. This year, MLB dramatically reduced the size of the amateur draft—crippling the potential futures for an entire class of future stars. Now teams have begun to announce that after the draft, entire scouting departments will be furloughed.

MLB owners are hacking away at the sport’s own institutions, then blaming everybody else for the wreckage. Meanwhile, they are still selling us nostalgia—the same old national pastime, the same old empty patriotic gestures as if the business of baseball was, in fact, accessible, humane, and democratic. Like the plan to open the season on the Fourth of July? It’s cynical, folks.

“Baseball is today big business that is packaged with beer, with broadcasting, and with other industries,” wrote Justice Douglas in his 1970 dissent. “The beneficiaries of the Federal Baseball Club decision are not the Babe Ruths, Ty Cobbs, and Lou Gehrigs.

The owners, whose records many say reveal a proclivity for predatory practices, do not come to us with equities. The equities are with the victims of the reserve clause.”

The other victim of the antitrust exemption and of a century of special treatment is the sport itself. Baseball is not a resource to be tapped, rather an institution that needs to be nurtured and fed. The commissioner and the owners in place have not demonstrated any interest in doing that work. Instead, they have demonstrated a commitment to mistreating scouts, part-time staff, and lower-level players, while asking once again, for a financial break for themselves. Let’s listen to William Douglas. Let’s not be swayed by phony patriotism and nostalgia. Let’s try and build a version of baseball that looks forward and not backwards.

Eric Nusbaum is the author of the book Stealing Home: Los Angeles, the Dodgers, and the Lives Caught in Between.

You need to be logged in to comment. Login or Subscribe
Iain Adamson
Excellent article. Sadly i fear the consequences of the owners actions will see changes none of us who love the game will approve of
Reply to Iain
Shaun P.
Bravo! Well written and well reasoned. Thank you for it.
Reply to Shaun
Jeffrey Hill
Nostalgia is a love of the past bedded in contempt for the present.

Always be suspicious when you are sold nostalgia.
Reply to Jeffrey
Llarry
The owners seem to believe that it falls to others to maintain and grow the game, and that their job is to sit back and cash the checks. Seriously, how many actions of teams and owners can be said to grow the game, beyond token donations to existing programs? MLB itself, has a slightly better track record at trying to spread the game and get kids playing, but it's still pretty weak.
Reply to Llarry
Scott Brandt
The stupidity of this article can not be overstated. There is no reason for a 35 round draft. The NFL and NBA both reduced their drafts from 20+ rounds years ago to 7 and 2 respectively. Guess what? Neither league has suffered. Likewise, having 9 minor league teams makes no sense. These reductions are long overdue. Endless whining about people playing baseball outside as risking death as just not scientific or accurate. How many players contracted the Chinese Communist Virus during Spring Training? I think it's safe to say ZERO! Because these millionaires would never stop complaining about it. Do you want lower ticket prices? Ask the players to cut their salaries in half for the next several years to help the fans who actually are suffering because of the government shutdowns. The only thing right in the whole article is that taxpayers should never foot the bill for building a stadium.
Reply to Scott
John Metzler
We found Manfred's burner account.
Reply to John
David Yeager
I mean, I willing to listen to the arguments around the draft and reduction of minor league teams I thought you were about to make and then this thing veered off the road into a telephone pole.
Reply to David
Craig Goldstein
Ticket prices don't have a bearing on player salary, Scott. https://www.baseballprospectus.com/news/article/1844/lies-damned-lies-ticket-prices-vs-player-salaries/
Reply to Craig
John Johnston
Yet another biased BP attack on MLB, and for nothing. The anti-business bias isn’t just blatantly obvious, it glows in the dark. Lose the bias and do better; this is just acting as flat out acting as grudge-bearing propagandists for the MLBPA.
Reply to John
Patrick
I think it's more helpful to look at it as being a "pro-player" bias (rather than "anti-business"). As fans, we all want the highest level of play possible, right? To do so, you have to provide opportunity for athletes to play and develop (the draft, IFAs, MiLB) and incentive ($$$). Yet the league as a whole continues to make moves that restrict both, despite raking in enormous profits. We all want MLB to be successful, but some feel the league is making long-term success less likely by their actions.
Reply to Patrick
Jon Crate
But the owners are rich, and therefore super smart and also handsome. They know what's best for the league.
Reply to Jon