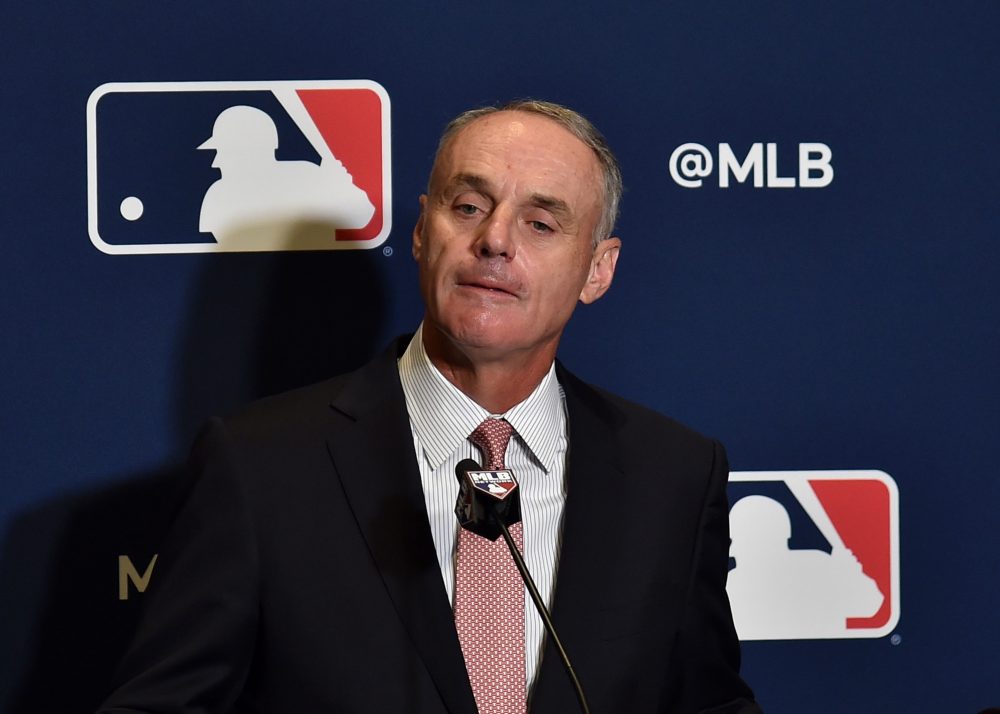 Around two weeks ago, reports fluttered about suggesting that MLB was in financial crisis, in danger of losing enough money that the owners were going to propose a one-season pact with the players, wherein the revenues generated would be split 50-50. It was ownership’s way of mitigating losses and an attempt to convince the public that players needed to share in the pain above and beyond the already agreed to pro-rata hit they’ve taken.

Whether you believe the language in the March agreement regarding the “economic feasibility” of playing games without fans entitles the league to a new round of negotiations on player salaries or just a round of negotiations about what is feasible and what isn’t, we’re getting the former. The owners waited those two weeks to ultimately not offer that “historic” 50-50 split, instead proposing cuts ranging from significant to massive for players across the league, in what is being termed a “sliding scale.” In this scenario, the league’s highest-paid players would take the brunt of the additional cuts, ultimately losing 77.6 percent of their full-season salaries, while players making the minimum wage would lose 54 percent of their full-season salaries.

The move appears to be both a non-starter in terms of getting anywhere in a negotiation and an attempt to split loyalties within the union and among fans, painting the higher-paid players as selfish for being unwilling to sacrifice their earnings as a means to ensure that lower-paid players are taken care of. The choice is, of course, a false one: The players could be paid their prorated salaries by ownership, for example. It’s an interesting tactic from the league, to promote the idea that the wealthiest should sacrifice to take care of the less wealthy, it’s just a wonder they haven’t applied it themselves. Increased revenue sharing within the league’s members would be a way for those teams that declare themselves unable to withstand the damage of the pandemic to weather these uncertain times. Surely the very successful owners within the league would see the value in servicing some of the Marlins’ debt? I assume they’re lining up to provide some breathing room for the Wilpons, as a show of unity. They are all in this together, after all.

Snark aside, a sliding scale isn’t a terrible approach. But it can’t work with these cuts, or likely any cuts. There’s no doubt that more than a few MLB owners are in dire straits. There’s also no doubt that has little to do with the players. The league’s owners have consistently pursued projects that they saw as long-term value adds to their company, as part of a slew of things that drove increasingly higher franchise valuations. To finance those projects, they took on debt because it is cheaper than injecting capital, but as Rob Mains said last week, “if a team borrows in order to build condos, hotels, and shopping on the land surrounding its ballpark, that’s an investment, not a hardship.”

I liken this strategy to playing craps. If someone enjoys a good, long roll you can win a bunch by putting bets down on specific numbers (this is the ancillary revenue investments), not just the point (the baseball team revenues). But the longer someone goes on, the more you’ll likely put out on the table trying to continue to profit as they continue to roll. The risk in this case is obvious: The hot hand runs cold in one cast of the dice and everything you have on the table is gone. The pandemic isn’t as obvious to see coming as the most likely combination of a pair of dice, but the concept remains: ownership spread out a bunch of money, both theirs and borrowed, thinking this roll would never end. Why it’s now the players’ problem that they didn’t pocket their winnings and instead chose to keep pressing their numbers, well, that’s a little less straightforward (or, it’s not if you give it a few moments of thought).

Back to the sliding scale, though. Here’s an idea I’ve been tinkering with (and have definitely seen others propose as well): Why not apply it to deferrals with interest?

One of the league’s biggest problems is that even some of the teams that won’t run in the red in a shortened, fanless season are cash-poor right now. We saw that with the league’s focus on reducing draft spending, including a deferral of bonus payments spread out over two years. If liquidity is the issue, the union can throw the league a bone by accepting deferred payments but insisting upon interest as a way to keep players (relatively) whole. The sliding scale can be applied, with the players making the most money receiving the highest percentage of the deferrals. This way, the union doesn’t back off its original deal of “no cuts aside from the proration” while the league receives its much-desired liquidity, and eases the pressure on the cash-poor teams.

How far into the future the deferrals would go would seem to be a potential point of contention. The league will likely want to spread it out further into the future, but the union would likely see anything beyond 2021 as potential leverage for the league to withhold money owed during the negotiations over the new CBA.

It’s difficult, given this dismal starting point, to imagine the two sides even getting to the point of haggling over how far into the future deferral payments might run. There is only a small amount of time available for the two sides to work this out, and while many a reporter cautioned this was only the first day of what is an important and long week, it’s hard to argue it was a good one. It is little insight to say any eventual agreement between ownership and players will require compromise on both sides. Given, however, that owners would appear to have both less to risk (physically) and more to lose than players (fiscally) in both the near and long-term, it’s unclear how efficacious it will be to ask players to come further than halfway.

You need to be logged in to comment. Login or Subscribe
braves107
Really interesting article Craig. You mention "It’s an interesting tactic from the league, to promote the idea that the wealthiest should sacrifice to take care of the less wealthy, it’s just a wonder they haven’t applied it themselves. " I think it's even worse than you've stated.

In the current proposal, the "progressive" scale of salaries that owners have proposed for players actually turns out to be "regressive" as far as the teams are concerned. The rich teams with lots of high contract players like the Yankees and Astros get a very big break on salaries this year. Meanwhile the poor teams like the Marlins get a much smaller break because their roster is filled with low paid players.
Reply to braves107
Alex Patton
Starting point is worse than dismal. Owners clearly are willing to bag the season as long as they can blame it on the players.
Reply to Alex
Jon Crate
But the owners are rich and therefore deserve that money. It's just good for baseball.
Reply to Jon