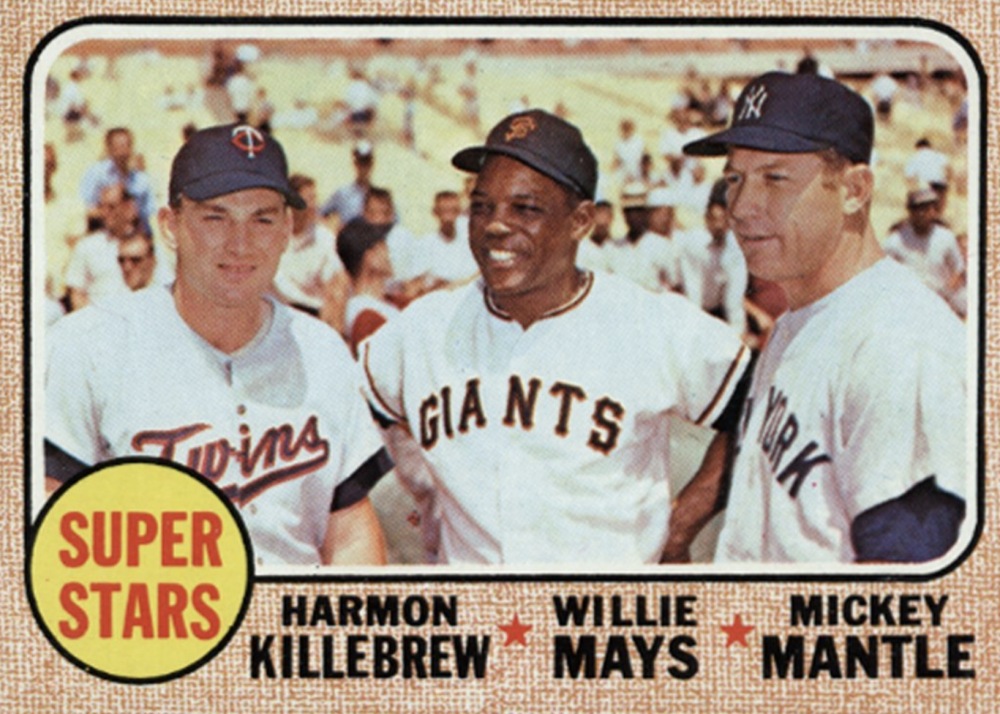 Throughout this past season, I wrote a week-by-week account of baseball a half-century ago. In American history, we remember 1968 as the year of the Tet Offensive, the King and Kennedy assassinations, the Chicago Democratic Convention riots, and the election of Richard Nixon. In baseball, it was the Year of the Pitcher, when Denny McLain won 31 games, Bob Gibson had a 1.12 ERA, and Don Drysdale pitched six straight shutouts.

But the + in DRC+ means the statistic is park- and league-adjusted. Whose bad statistics—everybody’s numbers were bad—were the best in the Year of the Pitcher?

This table lists the top 20 batting title qualifiers (21, actually, because there’s a tie for 20th), ranked by DRC+, with their slash statistics as well.

Ernie Banks. Mr. Cub was clearly on the downside of his Hall of Fame career. He was 37 in 1968, and though he hit 32 homers, he had the worst full-season batting average and on-base percentage, and the second-worst full-season OPS, of his career. Yet his DRC+ is the same as Edgar Martinez’s .324/.423/.579 in 2000. That’s not a surprise, given what we’ve learned about park- and league-adjusted figures; there were over 50 percent more runs scored per game in 2000 than in 1968. But Banks did much better per DRC+ than per OPS+ (118) and wRC+ (123), because DRC+ sees him as deserving 18 more singles than he was given credit for, reflective, in part, of a .229 BABIP that was the fourth-lowest among 90 MLB batting title qualifiers.

Mickey Mantle. The Hall of Famer’s last season was widely viewed as a sad swan song. It was the only time in his career that his batting average was below .245 or his slugging percentage under .430. In fact, he’d entered the season with a career .302 batting average; his .237 in 1968 dragged his lifetime figure below .300, to .298. He hit 18 homers, the only season in which he qualified for the batting title and hit fewer than 20, and he went deep in only 3.3 percent of his plate appearances, the lowest proportion of his career. And he was a first baseman, his knees having forced him off center field, where he’d starred.

He was second in the league in walks and, as a result, third in on-base percentage. He was one of only 11 major-league batting title qualifiers to walk more often than they struck out. He was one of only eight American Leaguers to hit a home run more frequently than once every 25 at-bats. Despite his aching wheels, he was 14th in the AL at avoiding double plays, just ahead of Baltimore’s speedy Don Buford. He wasn’t good compared to, say, turn of the millennium first basemen or peak Mickey Mantle. But he was good.

That meant he made relatively few outs on balls in play (despite a .212 BABIP), resulting in a positive 8.1 contribution from Out Runs, eighth in the league despite only 371 plate appearances. All his walks gave him 7.0 NIP (not in play) Runs, and Killebrew’s homers helped generate 6.0 Hit Runs. He was one of only 19 AL batters to have a positive score for all three. And that .212 BABIP, DRC+ estimates, cost him 10 singles and three doubles that he deserved.

The pennant-winning Redbirds were the class of the NL. They held their opponents to fewer than three runs per game, ranking first, second, and fourth, respectively, in ERA, FIP, and DRA. They had the second-best park-adjusted defensive efficiency. But their offense wasn’t noteworthy, as they scored 3.60 runs per game, just a bit above the league average of 3.43.

Nobody else was notable, either: Catcher Tim McCarver 99, first baseman and defending MVP Orlando Cepeda 114, second baseman Julian Javier 85, right fielder Roger Maris 108. There were no weak links on the team. But nobody hit anywhere near as well as Allen, Wynn, or Lee May, to name three on the table above who received no MVP consideration.

Roberto Clemente. The Pirates great had an outstanding season, hitting .291/.355/.482, giving him a 129 DRC+ that just misses the top 20 listed above. Yet the other rating systems viewed him as even better. He had a 152 OPS+, tying him for 11th in the majors, and his 145 wRC+ is tied for 13th. His .312 BABIP was the 14th-highest in the majors during a year in which the average BABIP was .269. As a result, DRC+ sees him as deserving of 14 fewer singles, two fewer doubles, six fewer triples, four fewer homers, and five fewer walks than he received. That he could be the beneficiary of such good fortune and still deserve to be a top-25 hitter speaks to his excellence.

Again, we don’t need DRC+ to tell us that batting statistics in 1968 were outliers, any more than we need advanced statistics to tell us that Gibson’s ERA or McLain’s win total were also outliers. The value is in expanding our knowledge to what we don’t know: That Mantle and Killebrew were, in fact, excellent hitters in 1968, that the Cardinals weren’t, and that Banks and Clemente’s seasons fit well into Hall of Fame résumés despite posting numbers worse and better, respectively, than they deserved. Based on what DRC+ has illuminated about baseball 50 years ago, I look forward to learning more. I hope you do, too.

You need to be logged in to comment. Login or Subscribe
ChicagoOriole
Boy it pays to be able to draw a walk in 1968, eh?
Reply to ChicagoOriole
Rob Mains
When baserunners are as scarce as they were back then, yeah. But walking in about 20% of your PAs, as Mantle and Killebrew did, is going to be valuable any season.
Reply to Rob
richard carter
This is good, really puts it into perspective.
Reply to richard
Rob Mains
Thanks, Richard, glad you liked it.
Reply to Rob
Greg Simons
I'd love to read a deeper dive into how Mantle's DRC+ is higher than Rose's despite Rose topping Mantle in all three triple-slash categories, and by a significant margin in two of them.
Reply to Greg
Rob Mains
Greg, I haven't gone into the data deeply but I know two factors off the top of my head. First, DRC+ is skeptical of guys who get a huge number of singles relative to league norms. Second, and probably more significantly in this case, Crosley Field was a hitters park, particularly so in 1968, while Yankee back then was a pitcher's park. Both OPS+ (152-143) and wRC+ (150-145) do give the edge to Rose, but barely. I don't know which pitchers they faced that year but that's a factor that could work in one or the other's favor that DRC+ captures and the other two don't.
Reply to Rob
Gilbert Traub
I gather that one factor in DRC+ differing from other measures is that DRC+ adjusts for low BABIP.


--Does the DRC+ adjustment consider speed of player, i.e., a slow runner's BABIP being low might not be bad luck but caused by that slow speed (and vice versa for faster runner)?

--Does the DRC+ adjustment consider shift-susceptibility of player, i.e., a strict pull hitter's BABIP being low might not be bad luck but caused by his "hitting where they are"
(and vice versa for someone who hits all over the place)?