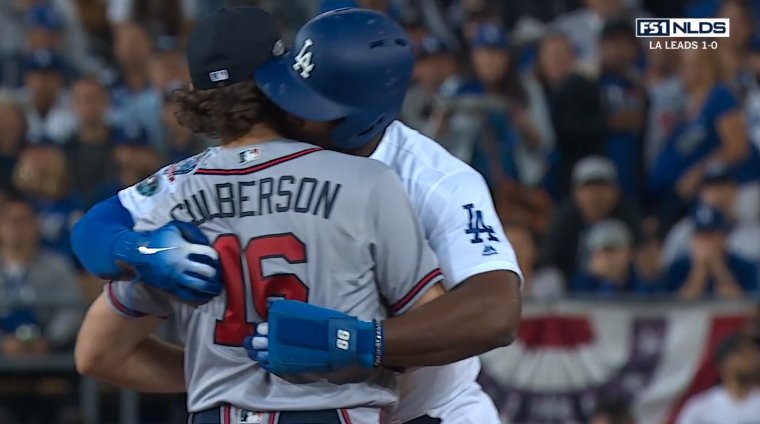 It’s the playoffs, and the players won’t stop hugging.

We were all watching in the bottom of the 11th inning of the National League Wild Card game when Nolan Arenado fielded the ball and tagged out a dead-to-rights Javier Baez running from second to third.

It seemed like there could have been more to the play—Rockies pitcher Seung-hwan Oh was pointing to first base after Arenado got the out—but Baez prevented anything else from happening by wrapping Arenado up in an embrace. For whatever reason, Arenado returned the gesture, the two shared a laugh and the Cubs were eventually bounced from the playoffs. It wasn’t crazy behavior for a garbage-time regular-season game, but in an elimination game in extra innings, it stood out.

In Game 2 of the Braves-Dodgers NLDS, it happened again. Yasiel Puig began what was later referred to as a “delayed steal” but easily could have been a “forgot what he was doing in the middle of doing it.” And, as Puig was thrown out easily at second, the Braves’ Charlie Culberson, Puig’s former teammate, received the throw. Puig grabbed onto Culberson and gave him a gentle kiss as the play concluded, a gesture he typically reserves for a resistant Turner Ward, the Dodgers hitting coach.

Nobody show this to Turner Ward. pic.twitter.com/wGDfqcbYkH

As you might expect, no one had any reactions to either of these events. Broadcasters were not confused, coaches were not mystified, former players were not dropping unsubtle references to how soft the modern game has become, and John Smoltz certainly did not fold his arms in the TBS booth and send air furiously whooshing out of each of his nostrils.

Of course there was a reaction—this was playoff baseball, not saying goodbye at grandma’s house. Was Baez obstructing the play against the Rockies? Why is Puig kissing an opponent after costing the Dodgers a runner? Plenty of questions arose, given the many, many playoff games that have been completed in baseball history featuring no hugging at all (save for after the last out, perhaps).

In either case, any potentially damaging fallout to the hugging—such as the Cubs capitalizing on the Rockies failing to get more than one out on the play; the Braves making the Dodgers pay for Puig’s mistake—never came to pass. In Puig’s case, the hugging occurred after the play was over, so it really had nothing to do with the action anyway. But you better believe there was a stink raised in some corners of the spectating, especially when Dave Roberts pulled aside Puig to ask him what in the hell was going on out there.

But, because the Cubs and Dodgers both emerged unscathed from the embraces, we have been robbed of the dozens of “Is hugging ruining baseball?!?” columns that would have surfaced, and we will instead be served some nice, reasonable, “FINALLY, Clayton Kershaw shows the guts to come through in the postseason” takes. Whew!

But it’s true. In-game hugging is another sign that the game certainly has changed. Just three years ago, we would have been using this space to talk about Chase Utley using his body as a human missile to obliterate Ruben Tejada and how there was nothing in the rules to prevent him from doing so (yet). Instead, we’re talking about players grabbing onto each other and holding on for dear life in a swiftly darkening world.

And yet, hugging has always had a place in baseball. Though the exact time and place have become something of a debate, baseball’s most famous hug served as an iconic moment of its cultural history. Jackie Robinson, not long after breaking baseball’s modern racial barrier, was getting taunted and harassed by the home crowd of an opponent when his white teammate Pee Wee Reese wrapped an arm around his shoulders in a show of solidarity. Earlier this season, a couple of high schoolers—best friends on opposing teams—hugged after a game and the “class act” went viral, despite how different it made our own experiences in high school sports seem by contrast. Ozzie Albies and Ronald Acuna Jr. used hugging and massaging all year long as a way to, we can only assume, draw power from each other.

Who doesn’t love watching baseball get played hard? Guys yakking at each other over a pitch too close to a skull; benches getting warned during a stifling summer day game; a catcher with his pistons firing fast enough to apply baseball’s indecipherable rules during a live play at the plate; or Puig making a diving catch and theatrically flipping the ball over his shoulder moments after making a boneheaded baserunning mistake. These things don’t get ruined by a couple of bro-grabs in prime time. Even with the hugging Friday night, baseball still managed to reach its target demographic on an emotional level.

The difference is, yeah, you probably don’t want to disrupt a live play with a hug break. Some guys need to hate to their opponents to stay competitive. But then again, as we repeatedly learn watching the Dodgers, some guys are Yasiel Puig.

I don’t think Javier Baez went into the National League Wild Card game intent on hugging the other team’s third baseman. I don’t think Puig went into the second game of the NLDS targeting Culberson for kisses. But love is alive in the playoffs this year. In some cases, it’s not the most well-timed love, but like any form of the emotion, it’s letting us know it’s there, ready or not.

There’s nothing to hate about a little love. Much later in life, Reese told baseball historian Roger Kahn, “I was just trying to make the world a little bit better. That’s what you’re supposed to do with your life, isn’t it?”

“What’s next?!” ask the stone-hearted. “Love-ins? Kissing booths?!?” Well, that depends on the next CBA. But until then, we’ll just have to watch players hug in the playoffs if they want to, and consider that maybe by doing so, they helped make the world a little better.

You need to be logged in to comment. Login or Subscribe
Robert Otey
This is a fun story, but what I've read, the Jackie Robinson / Pee Wee Reese story has not been officially proved to be true. Some say it is, some say it isn't, but there isn't any reliable proof either way to distinguish between legend and fact.
Reply to Robert
David Brown
Interesting point, Robert. I think the spirit of the Jackie-Pee Wee hug is real. ESPN did a story about this after 42 came out, and it is apparent that the players embraced at some point *like* they did in the film--but it was more likely to have happened in 1948 and in Boston, as opposed to the year before in Cincy. What they showed in 42 makes for a better scene in a movie, of course, and it's OK to do it like that just as long as it's not a documentary. We shouldn't need to have proof that Reese and Robinson embraced precisely as depicted; more importantly, Reese generally helped to ease Robinson's acceptance on the Dodgers and the league.
Reply to David
Robert Otey
thank you for the enlightening response. excellent points, very true. In that light, yes, the Pee Wee / jackie 'hug' defintely belongs in this 'pantheon'. Movies do tend to kaleidoscope history for better or for worse, and I think that '42' managed to tell the story but not homogenize it
Reply to Robert