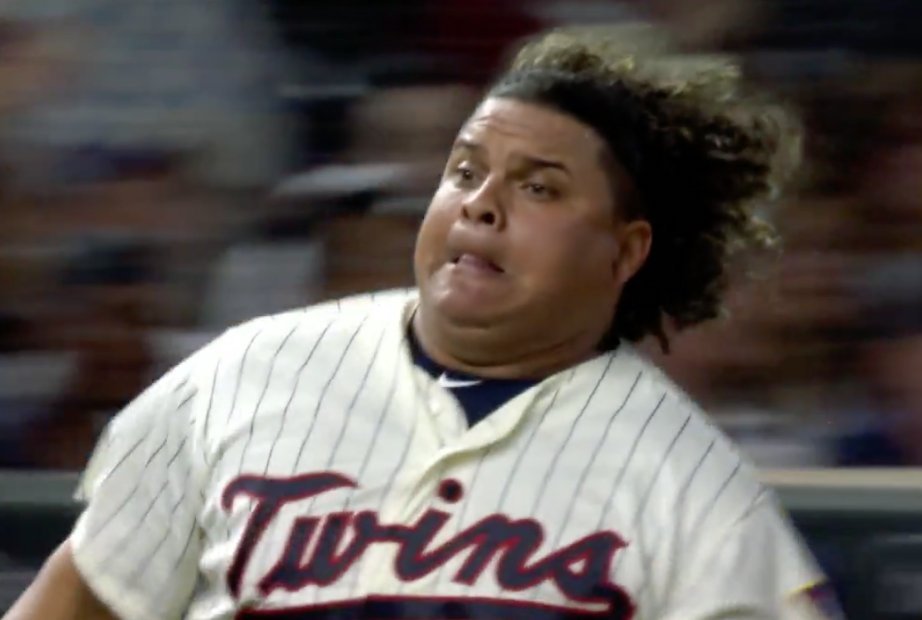 In the minors, his historic, minuscule strikeout and walk rates made him an oft-discussed person of intrigue here at Baseball Prospectus and at similar places, as well as a frequent topic of conversation on the Effectively Wild podcast. Then he got called up by the Twins in late June—and again in late August—and everyone who’d been reading and hearing about The Legend for years actually got a look at him in action, falling further in love.

I mean, how could you not?

Astudillo was never considered a top prospect and spent nine seasons in the minors playing in four different organizations before making his big-league debut at age 26. He’s listed at 5-foot-9 and 225 pounds, both of which are generous, and the man nicknamed La Tortuga (The Turtle) has made headlines for no-look pickoffs, hidden-ball tricks, and various other GIF-worthy things related to his appearance, demeanor, and style of play. The other night Twitter went nuts when he scored from first base on a double, simply because he did it in such an Astudillian way.

It’s natural to assume a journeyman catcher who’s built like a fire hydrant and swings at everything is just a novelty act, getting his 15 minutes in the spotlight for a bad team in need of late-season bodies. But just because Astudillo is fun to watch doesn’t mean that’s all he can be. Even the Twins were skeptical, placing Astudillo no higher than fourth on their organizational depth chart and playing him almost everywhere except catcher during his initial call-up. However, with Jason Castro injured, Bobby Wilson traded as part of the Backup Catcher Exchange Program, and September roster expansion, he’s now getting a real chance to play for the first time.

Not only is Astudillo hitting .305/.328/.492 with three homers through 20 games as a big leaguer, he’s been as advertised with just two strikeouts and one walk in 61 plate appearances. Among the 522 non-pitchers with at least 50 plate appearances this season, Astudillo has the lowest strikeout rate, the second-lowest swinging-strike rate, and the third-lowest walk rate. However, he’s not among the top 40 in overall swing rate, out-of-zone swing rate, or in-zone swing rate. It’s not so much that Astudillo swings at everything, although he’s certainly not shy about hacking. It’s that when he does swing, he never misses. His contact rate of 93 percent is the highest in baseball.

That’s admittedly a sample size too small to mean much of anything, although it does match what he’s done in the minors with a grand total of 81 strikeouts and 85 walks in 2,461 career plate appearances. However, perhaps the most noteworthy aspect of his limited time with the Twins is something for which a small sample size can actually provide insight. Astudillo has a poor defensive reputation, which no doubt played a big part in why he waited so long for a call-up and then wasn’t even allowed to play his career-long position when he did arrive. According to BP’s fielding metrics, though, Astudillo has been an above-average pitch framer for the Twins.

Research has shown that pitch-framing numbers stabilize much more quickly than most things, in part due to even one game spent behind the plate involving receiving more than 100 pitches. Or, put another way: Astudillo has barely done any catching for the Twins, yet he’s already logged more than 500 framing chances compared to just 181 pitches seen as a hitter. Beyond that, he graded out as an above-average framer at Double-A and Triple-A, and in 2016, 2017, and 2018. Astudillo also has shown a strong arm, throwing out two of the six steal attempts while posting a “pop time” to second base that would rank seventh-best among MLB catchers if he had enough playing time to qualify. He threw out 30 percent of steal attempts at Triple-A, including 38 percent this season.

It’s more difficult to evaluate Astudillo’s blocking and pitch calling and overall staff management, and in general it’s certainly possible that he’s a poor all-around defender. But given how he’s looked and graded out with the Twins, and his numbers in the minors, it seems tough to imagine that he’s a terrible, unplayable defender. That’s a very low bar to be sure, but clearing it could be the difference between Astudillo remaining a fan favorite in the International League or carving out an actual niche in the majors.

Astudillo caught right-hander Kohl Stewart for six innings of one-run ball Monday night, and the rookie was full of praise for his defense, telling Mike Berardino of the St. Paul Pioneer Press:

Love him. Unbelievable. It seems like just the way he receives the ball, I’m not really shaking (him off). I shook maybe once tonight. Willians just called a good game.

Twins manager Paul Molitor seems to agree, telling BP’s own Dave Brown over the weekend that Astudillo’s defense has been a pleasant surprise:

Guys love him. He’s always in the mix somewhere with his teammates. You’ve got to be able to help your teammates, and he’s shown that he can do some things. He’s doing good, and the entertainment is a bonus.

Of course, Molitor also added: “Trying to figure out how it would look next year is a little premature.”

And that’s the rub. Astudillo has had to fight for everything in his career so far, and he’ll have to fight for a place in the big leagues next season, with the Twins or elsewhere. Minnesota has Castro under contract for $8 million in 2019 and Mitch Garver has hit well in an expanded role, albeit with shaky defense. Astudillo is certainly more versatile than most catchers—the Twins played him at second base, third base, left field, center field, and pitcher before using him behind the plate—but he’s probably not good enough in the field anywhere else to make carrying three catchers feasible for a team with a 13-man pitching staff.

Even if he doesn’t lose his 40-man roster spot during the standard end-of-season housecleaning, he’s certainly no sure thing to make it through the entire offseason, although given Castro’s uncertain health status keeping Astudillo around as insurance seemingly makes sense. Another factor is whether the Twins think Astudillo’s bat is good enough to be useful at least occasionally at designated hitter, where they currently have no one slotted for 2019.

That notion would have been absurd early in Astudillo’s career, when his extreme contact skills were paired with very little power, but he’s unlocked some thump over the past two seasons. Through the 2016 season, Astudillo was 24 years old with a .390 career slugging percentage in the minors, including a lowly .332 mark at Double-A. Since then he’s slugged .495 at Triple-A, with more homers (16) in 406 at-bats there than he had (13) in his previous 1,859 at-bats.

Astudillo signed a minor-league deal with the Twins in November and went on to hit 12 homers in 78 games for their Triple-A affiliate after never topping four homers in any previous season. Alex Hassan, a former major-league outfielder now in the Twins’ front office as assistant director of player development, told Ben Lindbergh of The Ringer: “We encouraged him to look to do more damage early in the count, and not just put the ball in play.”

High-contact, low-power hitters adding pop has been a trend across baseball, as analytics departments and coaching staffs use new technology and data to encourage mechanical tweaks and altered approaches in the most homer-friendly era of all time. No one made more contact than Astudillo, and few hitters possessed less power, so he was an ideal candidate for change. Parker Hageman of Twins Daily broke down the differences in Astudillo’s swing when he was first called up, and in talking to Brown last week Molitor said: “It’s not like he’s a big-time power threat, but I think he’s learned he can drive the baseball to the pull side if the pitch is in his wheelhouse.”

So far, big-league pitchers have been very willing to throw Astudillo strikes early in counts, but that figures to change thanks to his initial success and the realization that any strike you throw him will be hit somewhere. His next adjustment might be showing a bit more patience in order to make pitchers pay for increased cautiousness by getting into more hitter’s counts. There’s usually a sense with undisciplined hitters that they’re at the pitcher’s mercy, but Astudillo flips that around somewhat because he so rarely whiffs. When nearly every swing you take results in the end of a plate appearance and a ball being put in play, even slight adjustments can have a big impact.

Astudillo has always found himself on the fringes because of an unusual body type and skill set. However, there’s mounting evidence that his defense is less bad than his reputation suggests, and his ability to add power without sacrificing elite bat-to-ball skills should not be overlooked. MLB catchers have hit just .227/.291/.366 this season, with backups being asked to clear an even lower bar. Astudillo has hit .305/.328/.492 in his first taste of the majors after hitting .296/.330/.496 at Triple-A. By all accounts he’s a plus in the clubhouse and he’s without question a plus for fans watching. Astudillo has never looked the part of a major leaguer, but it might be time to start thinking of him as one.