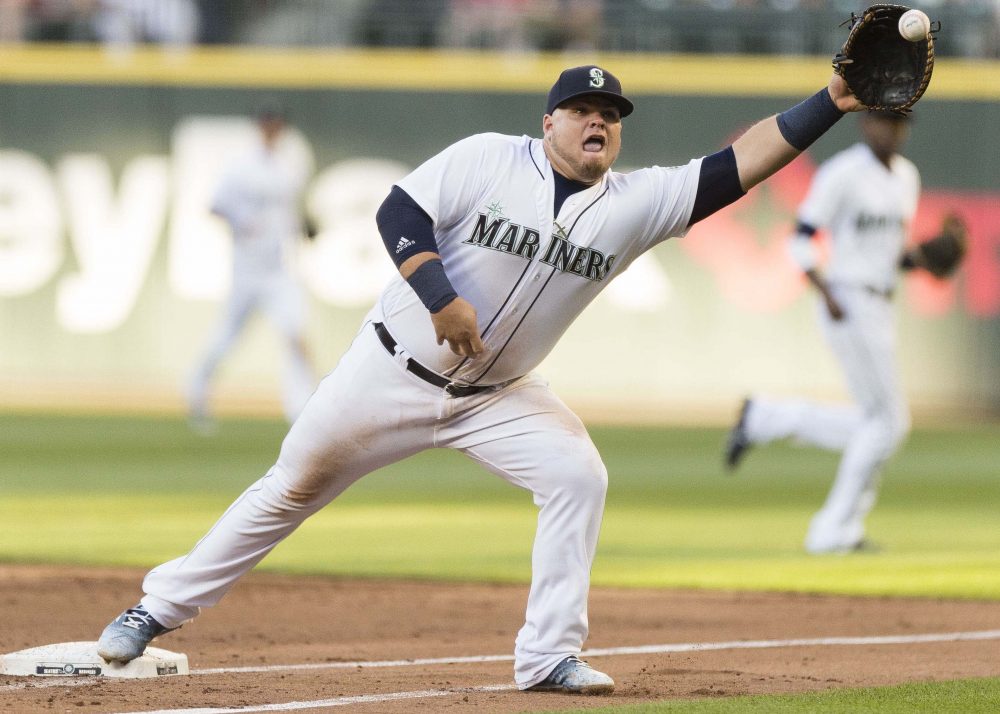 I picked a Quadruple-A All-Star team around this same time last season, and since then several of the eight hitters chosen have established themselves as big leaguers.

Mitch Garver, who at this time last season was 26 years old and had yet to even reach the majors, is now the Twins’ starting catcher and hitting .261/.336/.412 in 77 games. Tony Kemp has become a regular for the defending champs at age 26, hitting .288/.378/.424 in 62 games for the Astros. Tyler Naquin has re-entered the Indians’ plans, playing 61 games for a first-place team, and Luke Voit, Jabari Blash, Yandy Diaz, and Nolan Fontana have all seen at least some time in the big leagues this season.

As always, the line between veteran Triple-A star and valuable major leaguer is so incredibly thin that it often just comes down to opportunity and the ability to immediately take advantage when given even the tiniest of chances. Garver and Kemp were major leaguers all along, they just needed the opportunity. They got it, and now they’re performing well in sizable roles, but if they hadn’t gotten it they would have forever been branded “Quadruple-A players.”

Like last year, I’m looking to highlight players who’ve fallen through the cracks. They’re too old to be considered prospects and have been deemed too flawed to be regulars in the majors, at least right now, but they’re also too good for the minors. Below is my attempt to build the best lineup from Triple-A hitters who are at least 25 years old and have spent most or all of this season in the minors, with a focus on players I think could actually be assets to major-league teams.

I’m not totally convinced Astudillo is a major leaguer, but I am totally convinced that watching him play baseball is fun. Plus, it’s hard to find a deserving catcher for the Quadruple-A team. Humor me. Astudillo spent two weeks in Minnesota, but the Twins refused to use him behind the plate. They used him at second base, third base, center field, left field, designated hitter, and pitcher—several of which are pretty funny if you’ve ever laid eyes on Astudillo—but not at catcher, where he’s spent most of his career. He went 5-for-19 (.268) at the plate, and fittingly struck out just once and drew zero walks.

Astudillo is listed as 5-foot-9 and 225 pounds, both of which are generous. He makes no-look pickoff throws and pulls hidden-ball tricks. And he swings at everything, posting some of the lowest strikeout and walk rates in modern history. This season at Triple-A he’s hit .273/.313/.474 with 13 strikeouts and nine walks in 269 plate appearances, and for his career he’s averaged 21 walks and 20 strikeouts per 600 PA. I’d love to see him snag a bench spot somewhere, mostly because he’s super interesting. He also has quasi-versatility, and the ability to always put a ball in play is a nice skill for a pinch-hitter.

Mariners first basemen have hit .238/.282/.434 this season, with only two MLB teams getting a lower on-base percentage from the position. Most of that is Ryon Healy, whom the Mariners traded for this offseason specifically to avoid giving Vogelbach the job. Healy has hit .239/.271/.448 in 100 games, producing a .251 True Average that ranks 25th out of 28 first basemen with at least 300 plate appearances. He’s been sub replacement level for a team fighting for a playoff spot. Meanwhile, everyone’s favorite Large Adult Son has hit .302/.441/.561 at Triple-A, leading the Pacific Coast League in OBP and ranking fifth in OPS.

Vogelbach has consistently crushed Triple-A pitching, but he’s 25 years old in his eighth pro season and still searching for his first extended shot in the majors. It’s easy to see why, as he’s built like a Division II offensive lineman and isn’t much of a defender, but you’d think the Mariners could have carved out a platoon role for his left-handed bat this season. This spring PECOTA projected Vogelbach to out-hit Healy, and that gap is even larger now in the system’s eyes. Yet with Healy starting every day and Robinson Cano due back from his suspension soon, the window for Vogelbach in Seattle seems smaller than ever.

McNeil showed good on-base skills and little power early in his pro career and then injuries limited him to 51 total games in 2016-2017, knocking the former 12th-round pick off the prospect map. He’s healthy now and basically forced the Mets to call him up by hitting .342/.411/.617 between Double-A and Triple-A. Jeffrey Paternostro noted back in May that McNeil looked like a different player, adding strength and altering his swing mechanics. Not only did he hit 19 homers in 384 plate appearances after totaling nine homers in 1,458 plate appearances coming into the season, McNeil did so while maintaining his strike-zone control.

It’s possible that he’s simply as 26-year-old non-prospect having a fluke season and will resume being organizational fodder soon. After all, the Mets themselves were very skeptical of McNeil’s breakout and went out of their way to avoid calling him up until two weeks ago. However, the current home run explosion across baseball has seen quite a few non-sluggers with good bat-to-ball skills successfully add power to their games with some straightforward adjustments, and so far at least McNeil seems to fit that bill. If the Mets don’t at least give him an extended look down the stretch … well, they’ll be the Mets.

It’s hard to find a shortstop for the Quadruple-A team, because anyone with a decent glove and any sort of hitting ability gets called up pretty quickly. I’m stretching things a bit to fit White into the lineup, but he’s played shortstop about 20 percent of the time at Triple-A during the past two seasons. White debuted with the Astros as a first baseman in 2016, back when he looked like a potential middle-of-the-order slugger, but he flopped in 86 games and has mostly been in the minors since. He dropped a bunch of weight and started playing all over the infield, with the goal now being a bench gig at age 27.

He’s continued to put up big numbers at Triple-A, including .333/.444/.569 with 14 homers, 18 doubles, and more walks (46) than strikeouts (39) in 70 games this season, leading the Pacific Coast League in OPS. And despite a rough first taste of the majors, White’s overall .238/.311/.433 line in 134 total games for the Astros is decent, and certainly enough to warrant another look. He’s probably not good enough defensively to actually see much time at shortstop in the majors, but he’s definitely too good offensively to be stuck at Triple-A.

Cleveland has stuck with Jason Kipnis at second base despite a second straight rough season, meaning Jose Ramirez has stayed at third base and Diaz has stayed at Triple-A. It’s been the same story as usual for Diaz, who has a huge on-base percentage, less power than his muscles and exit velocities would suggest, and no real opportunity with the Indians. He leads the International League with a .410 OBP, topping the .400 mark for the fourth straight season, and Diaz is a career .311 hitter with more walks than strikeouts as a minor leaguer. Yet at age 26 he’s spent less than two weeks in the majors this season.

Diaz is primarily a third baseman and gets positive reviews there, but he’s also logged some time at first base and in the outfield corners in an effort to increase his versatility. His home run total will be lacking at any of those spots as long as he keeps hitting so many ground balls, but Diaz does have some gap power and PECOTA has long been a believer in his OBP skills translating to the majors. He deserves a legitimate shot at a part-time role, in Cleveland or elsewhere, and I can’t help but think there’s more power to be discovered in Diaz’s bat if someone can get him to start elevating the ball.

Slater may not have star potential at age 25, but he seems like a very safe bet to hit .275 with 15-20 homers, tons of doubles, and plus defense. Presumably with the Giants fighting just to stay above .500 and likely realizing that their championship core is winding down, Slater will get more of a chance to stick in the majors down the stretch and into 2019. While he’s old for a prospect, Slater is the youngest of the 15 hitters to appear in at least 35 games for the Giants this season, and he’s one of just four such players under 30. They need him as much as he needs them.

Albuquerque of the Pacific Coast League is a spectacular hitting environment, so it’s important not to get mesmerized by raw offensive numbers produced there. In that way, it’s a good affiliate for the Rockies. With that said, Tauchman’s raw numbers are too good to ignore. He’s hit .336/.416/.604 in 91 games this year and .331/.386/.555 in 110 games last year, and his road numbers during that time (.294/.360/.488) are plenty good on their own. Tauchman is a capable center fielder with experience in both corners, he runs well, he controls the strike zone, and he’s a left-handed hitter who’s fared better against lefties in 2017 and 2018.

Tauchman is 27 years old and has gotten a grand total of 69 plate appearances for the Rockies, who continue to play Gerardo Parra every day despite his 81 OPS+ since 2016 ranking second-worst among all MLB corner outfielders with at least 1,000 plate appearances. Parra’s three-year contract ends this season, so perhaps Tauchman will get more of a look in 2019, but the Rockies certainly could have found a part-time role for him at some point during the past two years if they believed in him. Given his skill set and Triple-A track record, Tauchman merits a spot on a big-league bench at the very least.

Blash forever finds himself in this weird middle ground where MLB teams want to acquire him but don’t actually want to give him an extended opportunity in the majors. Within the past three years he’s been picked in the Rule 5 draft or traded for by the A’s, Padres, Yankees, and Angels, but has totaled just 306 plate appearances in the majors. He’s struggled in that limited action, hitting .190 with a bunch of strikeouts, which is exactly the type of worst-case scenario Blash’s minor-league numbers suggest. And yet every year he destroys Triple-A, including an absurd .325/.430/.732 in 70 games this season.

Blash is a solid 6-foot-5 and the ball absolutely jumps off his right-handed bat when he makes contact. He’s also a decent athlete and a solid defensive right fielder. He’s hit .274/.393/.610 in 1,230 plate appearances at Triple-A spanning parts of five seasons, topping a .925 OPS in each of the past four years and averaging 45 homers per 150 games. It seems almost impossible that Blash couldn’t hold his own in the majors, especially if spotted mostly versus left-handed pitching. He has massive power, he draws walks, and he’s not a negative in the field. At age 28 he’s running out of time.

You need to be logged in to comment. Login or Subscribe
Robert Hacking
Not too many of these articles please. They are the guys I take while others are drooling over the prospects at A ball. Shhhh......
Reply to Robert