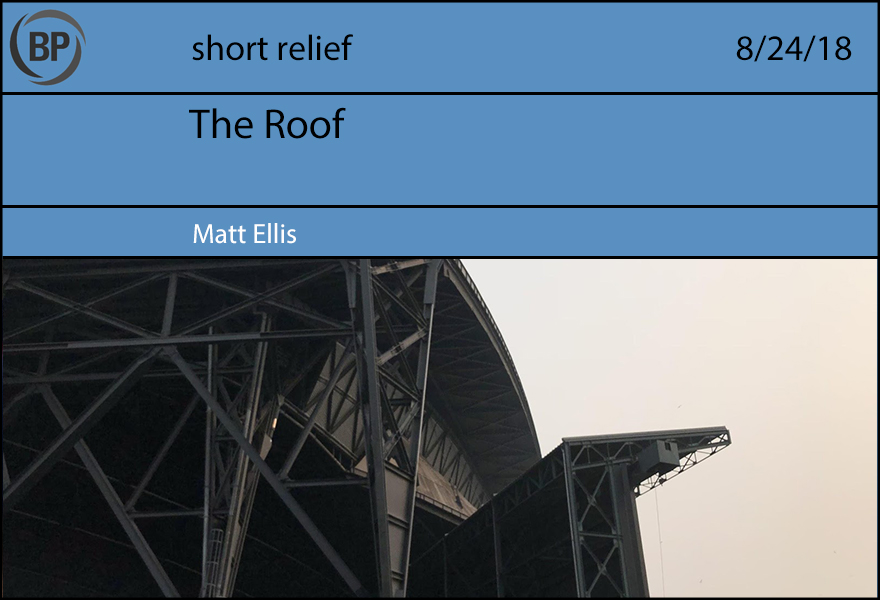 I didn’t stay to see them close the roof. Not like those first years, inchoate, with open mouth and wide eyes. It was a ritual at the end of each and every game: Strauss’ theme to 2001: A Space Odyssey would begin to echo over a crowd whispering their oohs and ahhs, and then once it closed, everyone would share a clap and go home. Some probably didn’t even watch the game. Things don’t look like the start of this paragraph anymore, but they certainly look like the very end of it.

August is the frozen month, an odd thing to type as I see smoke filling the air and the number “9” begin the two-digit temperature that sits in the air outside my parent’s home on the coast I no longer live on. It used to be coming home, but now it’s a thing I do before work starts up again, and I watch as the names on the back of jerseys start to change but my friends’ faces don’t, although they actually do, but I’m not there to see it happen. It’s frozen—everything is frozen, except for the air, which is very much on fire.

It’s not that strange that the closing of Safeco’s roof fails to draw the crowds it used to. It is no longer the wonder it was in those early days, but the real story seems to me that we just started to accept it as a Thing That Is There and went about our daily lives assimilating it into the list of all the other nouns we carry around to make sense of the world around us. But when there are suddenly 3,000 miles between you and those nouns, you start to remember the wonder you used to feel as a child, and you wish you could have just stayed one more time to see them close it. So that you could ooh and ahh, and feel like you had your whole life ahead of you and you didn’t live in another state, and that the people you cared about who lived there could materialize beyond a digitized voice or pixelated image sent through a fiber optic cable.

You want to see that shadow stretch over the diamond like a curtain closing an evening window, and you want to realize there is something beautiful left to see after the final out is made because now you just get on the plane and leave. Things don’t look like the beginning of this article, but they very much do look like the end of it. 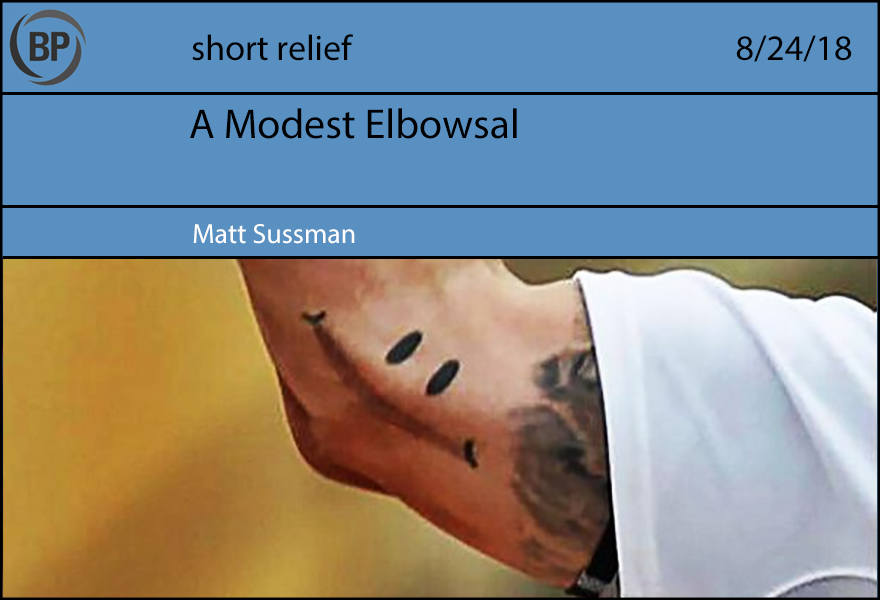 The Tigers recently announced that Artie Lewicki will undergo Tommy John surgery. His recovery will put him back on the mound, at the earliest, in 2020. The 26-year-old is good for spot starts and the team’s September will have been forgotten before it’s even played, which means this news is more damaging to Lewicki and his close friends than to anyone else. We also know that the Tigers are in the larval stages of a rebuild. They are bad. They will be bad next year. The 2020 season is when the Tigers’ youth movement may start becoming stars. So for his long-term prognosis, Lewicki could not have picked a better time to do this.

Of course, that means the rest of the pitchers will continue to play for a team that is not good. Michael Fulmer, Shane Greene, Matt Boyd, Daniel Norris, Joe Jiménez and several of their young prospects could need Tommy John at any moment, as they have not had it. That is why it is in the best interest to put them all under the knife and undergo Tommy John surgery.

It’s going to definitely hurt them short term. I can’t tell you who will pitch for them in 2019. I can, however, name some old free agents. Scott Kazmir! Ubaldo Jimenez! R.A. Dickey! Mat Latos! Jair Jurrjens! And relievers, well I heard you can find those anywhere, including with your own position players.

There’s a possibility that this may not work. But on the other hand, it absolutely will work, because that other hand is connected to an elbow with a ligament that works too. 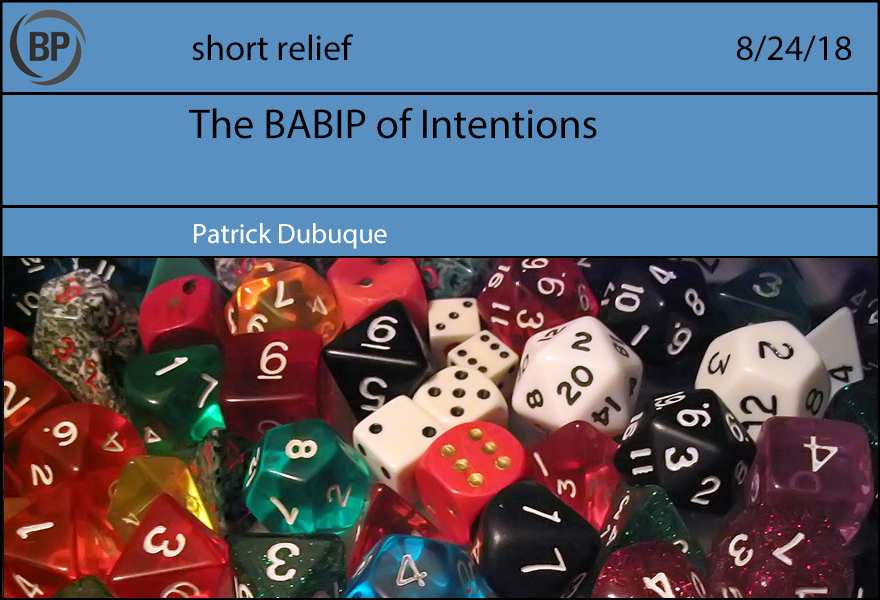 A confession: I’ve never really been all that interested in the concept of free will. Despite writing nearly two thousand words on it last week, it’s not a philosophical concept I tend to worry about too much; I’m one of those good old-fashioned American pragmatist types, like William James and John Dewey, who treat the subject as a tool for Getting Things Done. As long as we all go about life believing we have free will, from a practical standpoint, we all may as well have it, right?

But after writing last week, I surprised myself with a minor epiphany: free will might actually be overrated. This isn’t to say that I believe the universe is already pre-written and that our thoughts and choices are meaningless; it’s strange that the argument is presented as binary. There’s a third option, one that’s sensible logistically and still philosophically satisfying, which is that we have freedom of choice, just not all the time and not as purely free as we think. The world is still full of causal chains, the old butterfly wings and texts from exes and the cheekful of tobacco that leads to cancer. But these chains aren’t perfect and permanent: every once in a while, some piece of luck or chaos leaps in the way and breaks the chain, allowing us a single choice before that choice goes down its tiny little branching path. Sometimes we’re given that inflection point and we miss it because we’re running on our own tracks, living the way we’ve been taught to live.

I am a firm believer in the power of luck. Most philosophers don’t care for it; luck tends to damage both sides of the argument, stripping the grandness of the grand design from one end and robbing any merit for personal success on the other. Luck also gets misdefined: it’s not what we can’t control, any more than a person visiting Seattle in the winter could be surprised by gray sky. It’s what we can’t perceive, either because it’s so small or so far away that, even though it’s been there and has been, is too hard to calculate.

The other reason luck is so unpopular is that it’s so counterintuitive: we have a world of utopias and meritocracies baked into our skeletons, so much faith in orders. Luck is just as damning toward our pride as determinism, and hollow compensation when we fail. No one wants the world to be based on luck; even Einstein refused to let God have dice.

And yet here’s baseball. One of the reasons this sport is dear to me is that it is, on a social level, a science experiment, assembled in a controlled environment. We all agree to its conditions when we go through the gate. And baseball, bless its dumb heart, doesn’t give a damn what we want the world to look like. It rips Mark Fidrych and Rick Ankiel from us, gave us Gehrig instead of Pipp. It teaches the causal chain of the brush-back fastball followed by the backdoor slider, the fake bunt that pulls in the third baseman, the calf strain that leads to the elbow. We can accept it so easily on the diamond, this miniaturization of life. It’s so difficult to translate.

But it’s important, I think, to consider that even if our will is free, it’s not the only one out there. It’s important to stop and reflect on who we are in the moment, and all the things we didn’t do that caused us to be who we are. What gave us our scars? What sins did we go unpunished for? What success in our own life, so easily taken credit for, were nowhere near our intentions? Because there is always luck. Life is full of seeing-eye grounders that count in the box score.