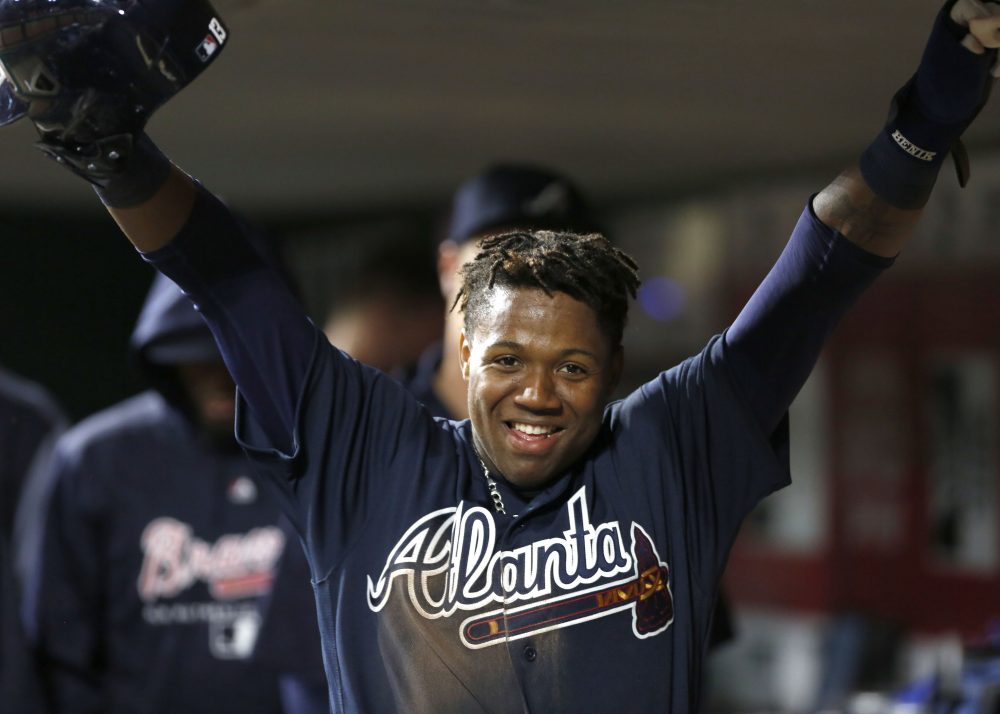 Ronald Acuna, rated by Baseball Prospectus as the No. 1 prospect in all of MLB, made his debut for the Braves at Cincinnati on Wednesday. He was 0 for 4 when he came up in the eighth inning, with the Braves down a run. Down in the count 1-2 to Kevin Shackelford, Acuna squared up a fastball down and the zone and sent it back up the box for his first big-league hit:

Once on base, young Acuna showed why the hype is so grown up. Going first to third on a hit to right field is not usually a big deal; going first to third on a hard-hit ball to left is significantly harder, as the left fielder has a much easier throw to make. Maybe in 2030-something, when Acuna has several hundred thousand miles piled up on his odometer, this will serve as a deterrent to him. Yesterday, however, was not the day that was going to happen:

Still, Atlanta fans would be wise to keep their fantasies in check—for now, at least. Acuna is, after all, just 20 years old. Not even old enough to drink legally. He’s got a long growth process ahead of him, and it’s probably not going to go as ideally as it did for Mike Trout—even if PECOTA likes Trout as Acuna’s second-most-accurate comparison. But elite athleticism married to a high baseball IQ is always a winning combination, and Acuna already looks to have an abundance of both—and that’s saying nothing of his 80-grade stealth pranking skills, too:

Felix Hernandez was 19 when he made his first big league start—younger than Acuna was for his debut. But just ask any of The Pussycat Dolls—2005 was a long time ago. Yoan Moncada was just 9 years old when Hernandez broke into the league, and yesterday Moncada was the first batter Hernandez faced in Chicago. Wasting no time whatsoever, Moncada turned around the first pitch he saw and sent it into orbit:

Speaking of things that happened forever ago, when Jonny Venters threw his previous major league pitch, Mitt Romney was campaigning for president. Since then, the one-time relief ace has undergone three Tommy John surgeries, plus a fourth non-TJ treatment for a torn UCL. Certainly nobody would blame Venters for giving up after all of that. But there he was Wednesday night, cementing his place as the third big leaguer to ever bounce back from his third Tommy John surgery. The facts surrounding Venters’ comeback are truly mind-blowing:

The call up of Jonny Venters took up a good chunk of tonight's game notes: pic.twitter.com/Q7dmDcpjut

Venters needed four pitches to retire Chris Davis on a ground ball, and his assignment for the night was done.

Thankfully, one of the coolest streaks in baseball history will live for at least one more day.

#Rays Jonny Venters has not allowed a run in his last eight appearances, spanning…

Continuing the night’s theme of debuts, Matt Harvey made his first appearance in his new role: relief pitcher. How’s Harvey handling the demotion to the bullpen? I’m glad you asked.

Harvey was asked why. "I have nothing to say to you guys," he said.

He was asked why not. "I dont [expletive] want to," Harvey replied.

In just three short years—his age 26-29 years, no less—Harvey has gone from “Batman, personified” to “the dog in the ‘This Is Fine’ meme, personified.” He’s not prohibitively too old to bounce back—hell, Jonny Venters fought back from worse—but it’s hard to look at Harvey pitch, or talk, or just do anything whatsoever, and not think that this might be the end of the line.

Didi Gregorious has now homered in four consecutive games. This one came in the third inning, off of Lance Lynn:

And in the same game, Tyler Austin delivered the day’s best twin pack of variety highlights: a line drive into the seats and a nifty sliding catch in foul territory. It was a great all-around day at the ballpark for the young Yankee first baseman.

It took Jose Altuve 101 at-bats to leave the yard this year, as the commentators so helpfully pointed out exactly two seconds before Altuve hit his first home run of 2018. Altuve’s big fly made the score 4-0 and got the diminutive second baseman a case of the silent treatment after he circled the bases:

Leading off the top of a doubleheader for the Tigers, Leonys Martin lived out the nightmare of every sensible ballplayer: a foul ball sent directly into his, um, crotchal region. As tends to happen to those who play roshambo with a hard baseball, Martin hit the dirt in pure agony.

As tends to happen with far less regularity, though, Martin stepped back up to the plate and launched a home run:

The Braves’ 5-4 victory went right down to the wire, with Ender Inciarte ending the contest with a catch at the fence. Inciarte managed to make the catch look like a routine can of corn that he really struggled with:

So was Inciarte doing his best Willie Mays Hayes impression? Not exactly.

In case you are wondering if it was on purpose.. it wasn’t, it was just funny to see Nick’s reaction after i missed time the wall. Great win Braves family #ChopOn

You remember from little league: always keep your eye on the ball. Well, Inciarte didn’t do that. In the heat of the moment, he succumbed to the temptation to peek at the wall closing in behind him—and, in doing so, lost track of the ball he was supposed to be catching. He recovered in time to make the play, but not in time to make the play look smooth. Regardless, pretty or not, Inciarte dodged the wall and hauled in the ball in a very difficult situation. Perhaps if he doesn’t look he crashes into the wall, turning the hit into a triple. At any rate, he made the play—and in Acuna’s first major-league game, the Braves held on to win.