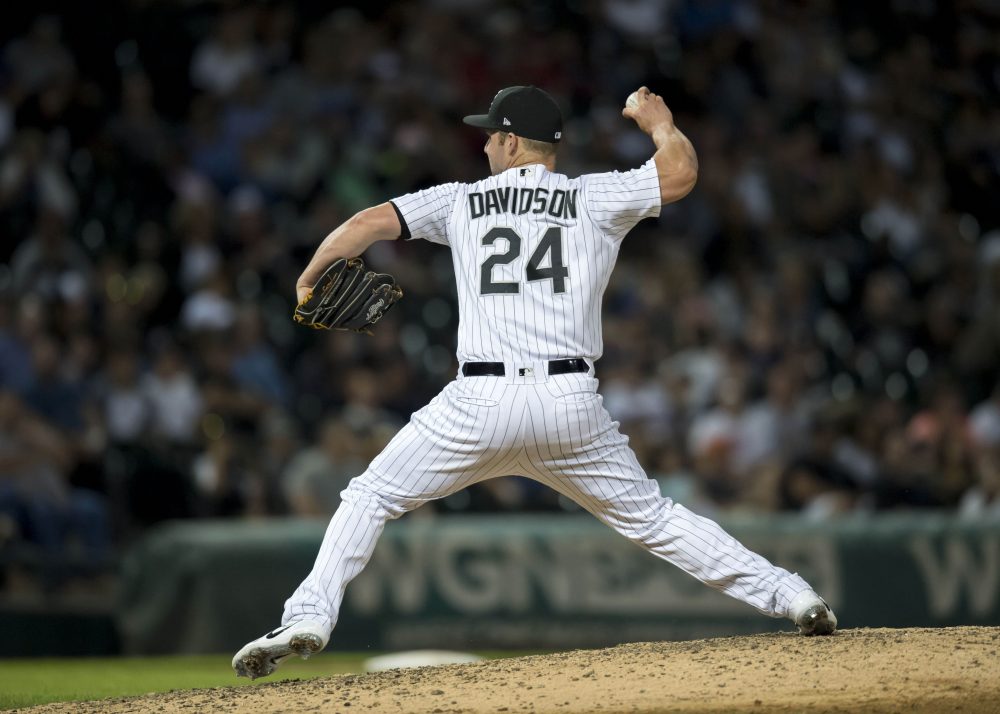 Overview: Davidson is a big man with a pitcher’s body. He repeats his simple mechanics well, especially considering the recent conversion to pitching. The arm can lead too much at times, but it’s nothing that can’t be cleaned up. He’s a reliever all the way, but there’s potential here for some utility. He struck out Giancarlo Stanton in my look, and he earned it.

Fastball: 45/55. The heater sits 91-92 and has some glove-side run that comes and goes. At its best, it shattered Brett Gardner’s bat. At its worst, it’s straight. Davidson never left it over the heart of the plate, often going upstairs when it straightened out. He also threw a few two-seamers here and there, but the four-seam is the primary offering.

Curveball: 50/60. This is the fun part. When it flashes plus, Davidson’s hook is truly beautiful, a 12-6 hammer that falls off the table beautifully. There were a few too many that stayed up, but perhaps Davidson was trying to drop them into the top to steal a strike or two. Dangerous living, yes. The pure movement on the pitch allows Davidson to derive value from it, but once he gets a better handle on it, it’ll be a true weapon.

Overall: Davidson still has work to do if he wants to be one of Rick Renteria’s trusted relievers. Some will advocate for him to serve as a position player, given the power in his bat, but there’s two-way potential here at the very least.

Did you notice that the Diamondbacks are back in first place? They went from being the runaway division favorites in April to desperately trying to keep up with the Dodgers, back to all of the way back to first.

Getting the better of Seranthony Dominguez is no easy thing. The Diamondbacks are good, and they’re not a team you’re going to want to meet in October. They’ve pushed the Dodgers out of a playoff spot for the moment.

Did you think, before the middle of April, that Trevor Bauer would have 200 strikeouts?

You shouldn’t be surprised. Bauer was really good last year, and he’s only getting better. That’s 11 K’s there. The AL Central is chock full of easy pickings for a guy like Bauer, too. That’s not to say he can’t do it against the best lineups in baseball, because he can, but getting to face the Twins and White Sox a lot must be nice.

The bottom line is the dude’s nasty.

You bet the Astros still found a way to win.

Marwin Gonzalez hasn’t followed up on his excellent 2017. He was so good last year, and he’s been so pedestrian. He’s still a threat, and Will Smith gave him a cookie.

The Yankees put seven runs up on the White Sox last night. They could have had more, but Adam Engel did this.

Start your baseballing with the Giants and Astros at 3:45 p.m. Eastern. Dallas Keuchel and Madison Bumgarner will face off in a battle of top-of-the-rotation lefties.

At 8:40, tune in to the Pirates and Rockies. It’ll be Jameson Taillon and Chad Bettis going as the two Wild Card hopefuls go at it.

And if you haven’t had enough of southpaws, Rich Hill and Sean Manaea are pitching for the Dodgers and A’s tonight at 10:05. Even if you have had enough, you should be watching Oakland. They’re fun as hell.

You need to be logged in to comment. Login or Subscribe
tearecrules
Dallas Keuchel is, arguably, either the Astros 3rd or 4th best starter. Within the category of "lefty" he'd be the top of the rotation since he's the only one in their rotation.
Reply to tearecrules