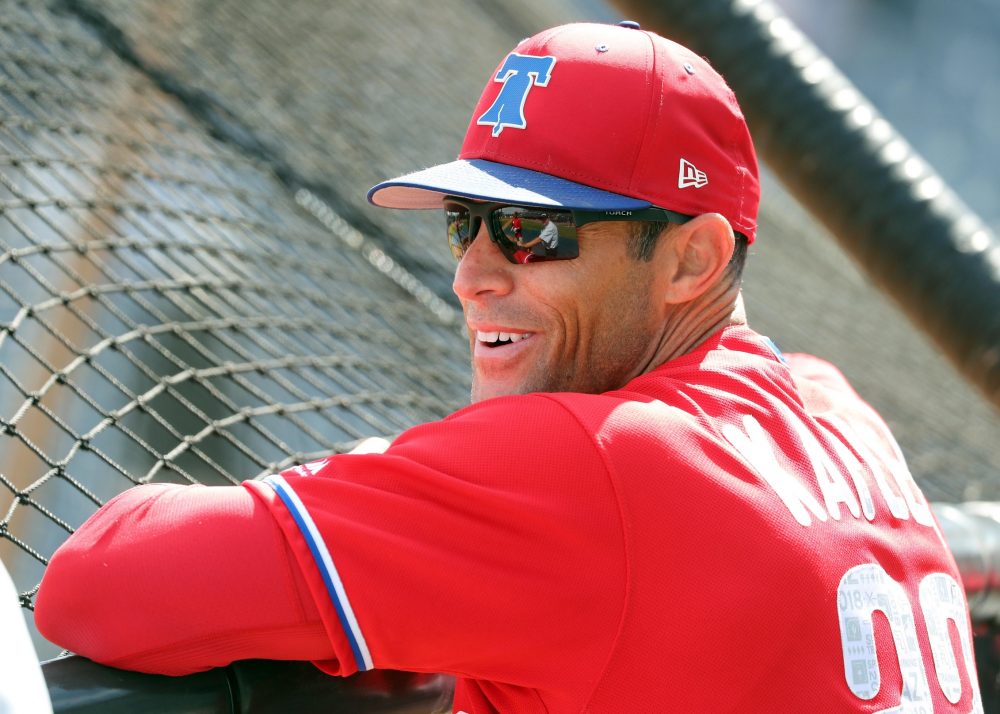 Managers take questions like hitters take plate appearances. There are a bunch of them daily. The outcomes—the answers—are out there for everyone to see each time. And we start making judgments sooner than we ought to. Before long, we think we know how a hitter’s season is going, and we think we know a manager—or could at least identify the feature likely to be inflated in his political cartoon.

Terry Francona is a leverage-focused bullpen manager and chews disgusting wads of gum. Bruce Bochy is liable to change relievers twice in a minute. Joe Maddon might show up with a zoo animal on any given day and favors multi-positional players, etc.

This process is seemingly accelerated in New York or Boston. Or Philadelphia. So far this spring, nothing between the lines has scandalized the baseball-watching public more than the tactics, mistakes, and utterances of new Phillies manager Gabe Kapler.

The reactions to … everything Kapler does … would lead one to believe that comments from and about him should stand out from his brethren. I wasn’t sure myself–he certainly seems different!–so I devised a quiz to help you gauge your mental manager caricatures. Read (and scroll) carefully!

It was suggested to [MANAGER] on Tuesday that the outside world seems more concerned than he does about how he will get playing time for all of his outfielders and first basemen during the 2018 season.

“There’s an outside world?” [MANAGER] said with mock incredulity.

[HE] continues to insist that he will make sense of having too many “starting” (he hates that word) players for spots in the lineup.

Labels, as pesky and outmoded as they seem in a post-Zobrist world, persist and matter. If it seems naïve to expect players to reject the notion of “starting” and embrace the pursuit of an excellent 500 to 550 plate appearances, well, you’ll have to take that up with Brewers manager Craig Counsell.

Some heads were understandably turned when Odubel Herrera–he of the consistent center field job and long-term extension–was not penciled in to the Phillies’ Opening Day lineup. One Philly television station published an article about the move with the headline, “Odubel Herrera Is Unhappy and Gabe Kapler Likes That.”

This is not from that station, nor any Philly-based outlet. This is, again, from the Milwaukee Journal-Sentinel, as Counsell pushed back on the notion of veterans having an automatic leg up for playing time.

“If somebody’s not in the Opening Day lineup—whether it be [YOUNG PLAYER] or somebody else—the message is: You’re probably in the lineup the next two, three, four, five days,” [MANAGER] said. “We’re going to make sure everybody understands and nobody is surprised when they come in and see themselves not in the lineup. There’s a why for everything we’re doing.”

This one is Kapler, in the spring, explaining a process—process, yes, I apologize—that nonetheless sent everyone into a tizzy approximately one week later when it was applied to Herrera’s exclusion from the Opening Day lineup. Actually, it’s not fair of me to call the criticism a tizzy. It was the Opening Day lineup, a place where respect is often shown to veterans.

Counsell, who stridently dismissed labels and veteran entitlement, obviously didn’t hold Ryan Braun out of the lineup on Opening Day, though he did play him at first base and keep Eric Thames on the bench. That didn’t cause a ruckus because Braun is the face of the franchise and Domingo Santana was a better player than Thames last season.

It’s harder to say just where Herrera falls on the spectrum of status. He was dubbed the Phillies’ best player by surprised on-lookers, and I guess that comes with a whiff of truth, though if you polled Phillies fans on who they expect to be the best position player in 2018, would he get a plurality of the votes?

“I want to be able to bring in a pitcher whenever it’s the best matchup, and if that carries over into the next inning I want our guys comfortable getting an out, sitting down, getting back up and getting some more outs the next inning,” [MANAGER] said. “Virtually everybody in our pen will be required to do that at some point.”

That would be Astros manager A.J. Hinch, most recently seen calling upon starters to finish out postseason games on the way to a world championship.

[MANAGER] following bizarre and costly bungling of a routine manager task: “It was just a screw-up, completely my mistake.”

Who bungled it and owned it? A) Gabe Kapler, B) Dave Roberts, C) Craig Counsell, D) A.J. Hinch

It was Counsell. As a relatively new manager, but not brand new, he botched the lineup card and sent Ryan Braun to the plate out of order and costing the club an out against Max Scherzer.

The Hoby Milner Incident, Kapler’s foot-in-bucket moment, occurred much earlier in his tenure, of course, and further inflamed an existing but less deserved storm of questions about bullpen usage. He had a very similar accountability-focused response, but the saga will likely live in memories for much longer—a likelihood that, as BP alumnus Michael Baumann pointed out on The Ringer MLB Show, might be tied more to timing than anything else. No one gets to pick their facepalm moments.

“If at any point the game hangs in the balance in our minds, we’re thinking of going to our dudes, our guys we feel like can get those hitters out,” [MANAGER] said. “So that could be the sixth, eighth, seventh, ninth. We’re going to go after the moment in the game that we feel like we can win it.”

It’s Kapler. This is largely the mindset that he followed in removing Aaron Nola on Opening Day and pursuing a likely, if aggressive, route toward victory. It succeeded in extricating the Phillies from the jam they were in at the time, only to fail when later relievers blew a large lead.

But nothing about the content of that statement helped you identify it as Kapler or differentiate it from Hinch or Terry Francona. No, the reason you got Kapler, if you did, is the word “dudes.”

Yes, Kapler sometimes sounds like he’s mistaken his press conference for a TED Talk. But I cannot personally tell whether I would have any reaction at all to, say, Counsell saying the same things. See, the only thing I had in mind about Counsell before he was hired in Milwaukee had to do with a funky batting stance that, presumably, has one thing in common with one’s preferred uses of coconut oil: It doesn’t influence his ability to manage a baseball team.

“We have all been conditioned for routines and consistency,” [MANAGER] said. “But I think that as this game has evolved, we’ve all had to see things in a different way. I’ve had many conversations with the players. There will be some changes. I think that where you hit in the order in years past, in decades past–there is a lot to be said for that. But in this day and age, with the data that we have, sometimes change is good.”

“The game is changing,” [YOUNG STAR PLAYER] said. “That’s been pretty apparent the last couple of years in baseball. That old-time way of thinking, I don’t think it’s completely gone away, but it’s starting to mesh with some of the new thought around baseball. I think one of those new thoughts is what [MANAGER] has stressed: flexibility.”

Which manager are we talking about? A) Joe Maddon, B) Dave Martinez, C) Dave Roberts, D) Gabe Kapler

One of the things that we know, but maybe forget, is that managers don’t really operate on their own terms. Not these days. The game is changing, as budding Phillies star Rhys Hoskins said shortly before Opening Day. Kapler is not expelling the winds of change from his muscular chest. He is a conduit, and a hired hand of a front office that wants these things done in this way (aside from The Hoby Milner Incident, obviously).

There are very legitimate questions about how data-driven decisions are implemented and explained to players, and about the effects interpersonal issues can have on the bottom line of wins and losses. That larger question exists in every clubhouse, though.

Hoskins’ assessment reminds us that players may distrust some of the machinations that create the lineup, and may bristle at some of the ways they are asked to play the game, but they are not blind to the origin of the ideas—above and beyond Kapler, to be sure. If you can glean anything from Kapler’s actual managerial tenure thus far that separates him from Counsell or Aaron Boone or Alex Cora—or Brad Ausmus, for that matter—then your eye is sharper than mine.

You need to be logged in to comment. Login or Subscribe
Todd Treichel
Excellent article. Many of us encounter coverage of our team's manager but much less about others, so it's hard to gain the perspective you have given us here.
Reply to Todd
ScottyB
Um... "It succeeded in extricating the Phillies from the jam they were in at the time, only to fail when later relievers blew a large lead." About that...

Nola left a man on 2nd with one out (having allowed 4 baserunners in a very efficient 5.1 inning outing, with a 5-run lead, thus far). Milner comes in and immediately gives up a 2-run homerun to the first batter he faced. How exactly, did this extricate the Phillies from their jam?

I agree that pre-emptively taking out an average (or less) starter before the 3rd time through the order makes a lot of sense. It doesn't make as much sense when you have an emerging stud like Nola dealing. Leaving 11 outs to an untested bullpen (instead of, say 6 or so) is almost certainly a worse alternative than a slightly diminished Nola.
Reply to ScottyB