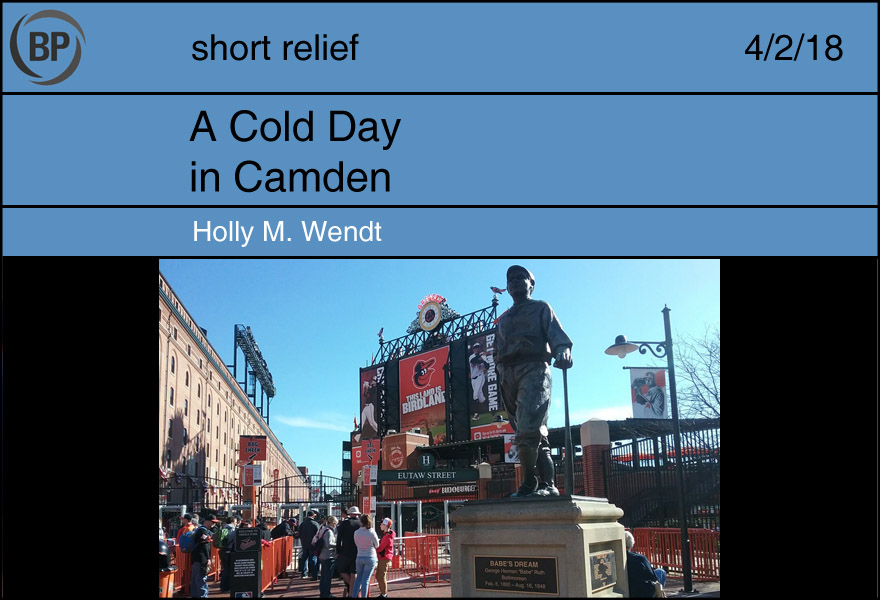 Somehow, I’d never been to Camden Yards prior to Saturday night, and if it wasn’t for the fact that the Phillies, Pirates, and Nationals were all opening the season out of town, that trend would likely have continued. But the schedule is as the schedule does, and we trundled our way to Baltimore to watch the Twins and the Orioles on the third official day of the season.

It’s strange to be at a professional sporting event possessed of absolutely no vested interest in the outcome, but that’s the position in which I found myself—two teams on which I had no particular favorite players, two teams whose performances and records were immaterial. Saturday night, too, wasn’t the staging for the script my light-and-life-starved winter brain concocted in early February; instead of welcoming summer onto the diamond, I wished I had worn the thicker set of thermals under my jeans, that I had put on a hoodie under my down jacket.

Still, the sun washed the late afternoon in gold, not a single cloud scraping the Baltimore sky, and we got to the park early enough to have to wait for the gates to open. Arriving that early means early enough to walk the stretch of Eutaw Street lined with vendors and shops and pocked all over with small bronze markers of the home runs that cleared the right field stands. More than eighty little plaques dot the concrete, featuring the home-side names of Chris Davis, Matt Wieters, and Luke Scott, along with most of the left-batting American League mashers of the last twenty-five years. I wandered and stooped until I found plaques for Matt Stairs and Jim Thome and Ken Griffey, Jr.

When it was time to take our seats, it was also time to hunch against the frigid wind whistling through the concourse. Everyone on the field looked cold, too. Orioles starter Andrew Cashner gave up three home runs in his five innings, but two outs into the bottom of the sixth, Minnesota’s Kyle Gibson was still on the mound, carrying a no-hitter. Trey Mancini hooked a liner into left field, and balaclava-clad Eddie Rosario made a strange, stuttering dive for it. The ball kicked off his glove, and as Rosario’s momentum carried all of him forward, he reached with his bare hand, snatched the ball from the air, and kept the no-hitter alive.

Ultimately, it wouldn’t matter much: Gibson didn’t come back out for the seventh, and the Orioles broke the no-hitter on a Jonathan Schoop single in the eighth. The Twins were ahead by six runs, but the Orioles scored a pair in the bottom of the ninth on Tim Beckham’s home-side homerun. Beckham’s contribution made as little a difference, all told, as Rosario’s catch, but all of it was baseball, and I was definitely warmer when I was clapping. 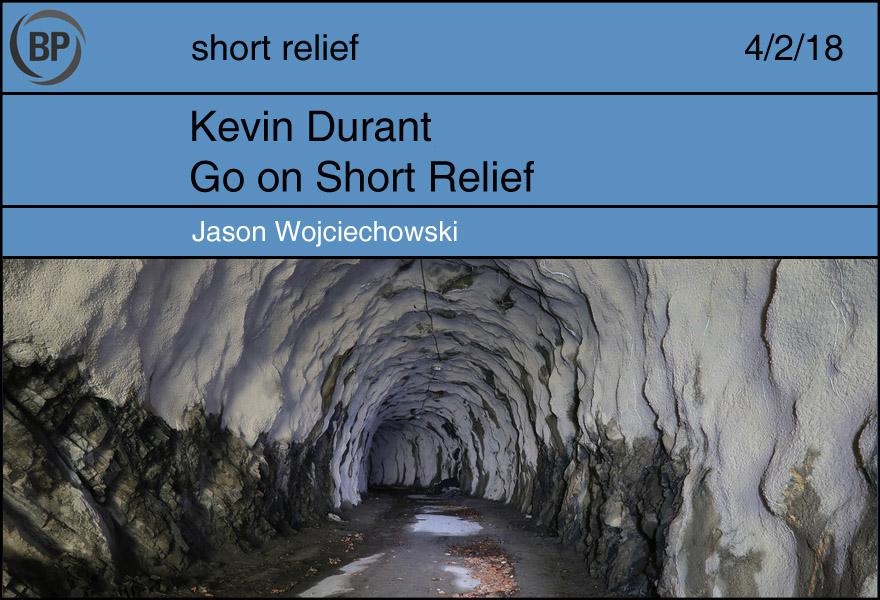 The “go on Chapo” meme refers, generally speaking, to a desire that the subject of the meme be a guest on the noted left-wing-politics podcast Chapo Trap House. It being a meme, it is deployed with a certain irony, although not typically to the point of, for example, asking Bill O’Reilly to go on Chapo. Instead, perhaps someone might ask Tiffany Trump to go on Chapo after she was noticed Liking an anti-GOP post on Instagram.

The point of this background is to ruin any sense of mystery or spontaneity when I tell Kevin Durant to go on Short Relief. Durant, a world-class basketball player for the reigning NBA champion Golden State Warriors, told Chris Haynes of ESPN: “After winning that championship (last season), I learned that much hadn’t changed. I thought it would fill a certain [void]. It didn’t.”

I understand that we are a baseball site, and that Durant is a basketball player, but I would think many of the lessons we are attempting to impart in this space are particularly but not exclusively applicable to baseball. I would further think that the ultimate meaninglessness of championships, of winning more broadly, is one of the most portable concepts we have available to us on this site. If Durant had been reading this site all along, he would have been under no illusions about the ultimate value of his long-sought NBA trophy. Instead of relentlessly working out, improving his game, screaming at referees, and so forth, he could have been sitting at the mouth of a cave deep in a secluded forest, pondering the actual mysteries of life.

Let this also serve as a reminder here early this baseball season: While we’re all excited and happy that baseball is back on our TVs and radios and internet-connected devices, not to mention in our cities, never forget that the only thing that really exists is the void itself. 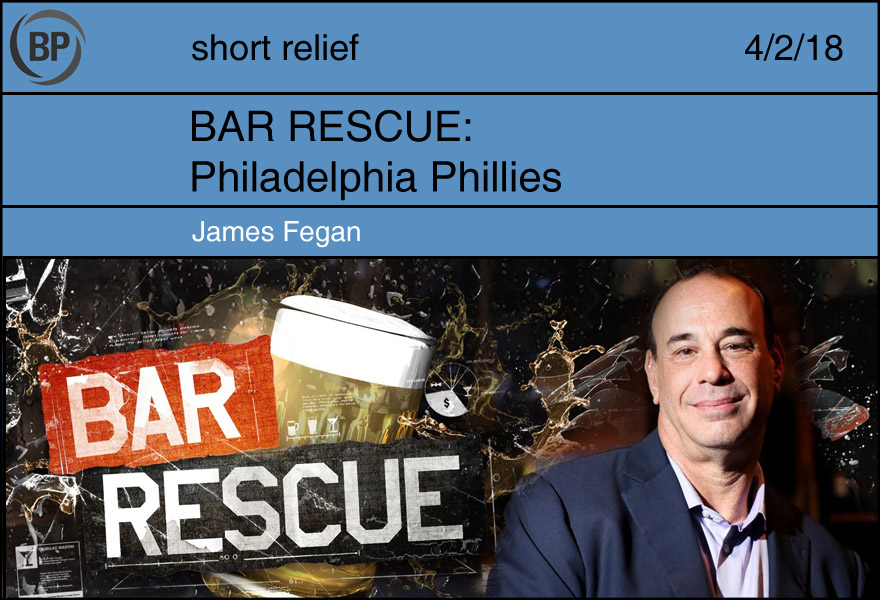 [Gabe Kapler is beginning hour three of his pitcher’s meeting, which he was not originally scheduled to attend]

KAPLER: Bok Choy [Takes exaggeratedly large bite that may be the bite he always takes] is especially good for aiding the cutter, but only when consumed between the fourth and sixth innings. I’ve personally tested this…

[Jon Taffer, wearing a Phillies hat with the tag still attached atop his head while the rest of his body is crammed into an ill-fitting Brooks Brothers suit]

TAFFER: SHUT IT DOWN!

TAFFER [Referring to video presentation that Phillies relievers set up while Kapler’s back was turned] My guys have been performing reconnaissance on your operation for the entire Mets series!

KAPLER: That was a tough series, but I was satiated by the impactfulness of our execution

[Video shows a supercut of one of Taffer’s assistants squeezed into a Todd Frazier jersey, striding into the left-handed batter’s box, followed by an increasingly agitated Kapler flipping through his notes, then attempting to put Hoby Milner in the game every single time]

KAPLER: Well, this is illuminating, in this presentation format.

[47 minutes of Bar Rescue show time later, Kapler and Taffer alone remain in the meeting room. There are glasses full of screwdrivers everywhere, along countless discarded Grey Goose and Sunny Delight bottles, but Taffer is demonstrating another one]

KAPLER: Your point is well-taken, but the platoon advantage still exists, it’s a thing. I can’t just ignore it.

TAFFER: You want your bar to be shut down over arms!?!? They’re just arms!

[TAFFER NARRATED EPILOGUE]: Thanks to generous contributions from our partners, we made some crucially targeted investments [Cut to every sign and scoreboard in Citizens Bank Park having been transformed into a neon sign in retro diner font] to upgrade the services and performances of the Philadelphia Phillies. [Cut to newspaper headline showing Phillies have absorbed Matt Kemp’s contract]

TAFFER: With my help, the 2018 Philadelphia Phillies improved their win total by five games from last season!