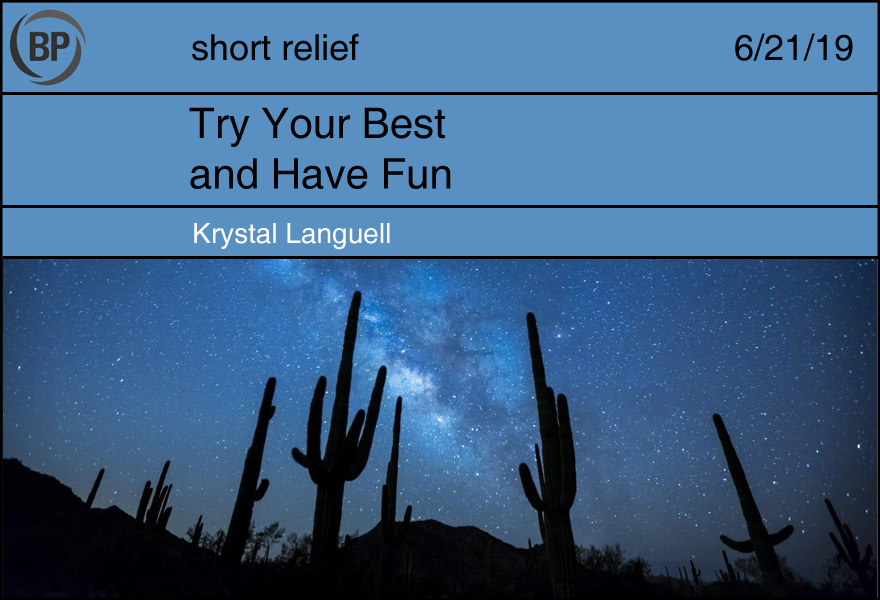 Anticipate the future. Think about it.
Unaffiliated with majors or minors, join
the Pecos League in the high or low desert.

The league changes each year. A snowstorm sixty
miles north of Ciudad Juarez damaged Apodaca Field,
closing it indefinitely. The CEO made a common mistake.

When we come back ornery from points west
having determined what makes a real athlete,
you’d better recognize rise, fall, and rotation still.

The league could rise, the stadiums fall, the teams rotate.
The full baseball moon will rise over the Pecos Mountains in
the sputtering league’s weird logo. Bisbee, Cruces, Ruidoso. 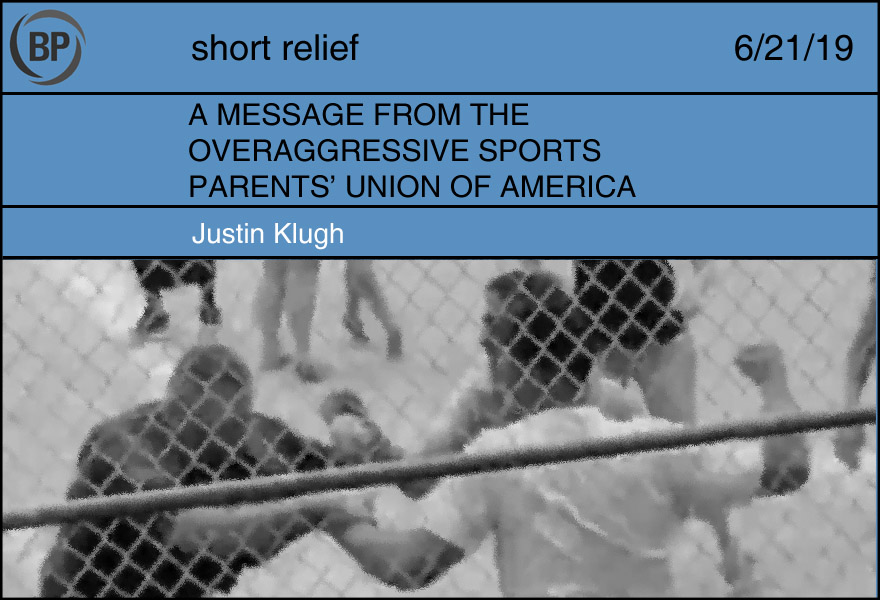 It is with deep disgust that the OSPUA is forced to release this memo in response to our critics’ requests that parent behavior at children’s baseball games be at any way curbed.

Our reactions to calls that go against our children, or to our children misplaying a ball, are a form of passion unknown to those who do not have children of their own. Only once you have, through carefully screamed instruction, raised your son or daughter to believe that becoming anything less than an elite-level athlete is a failure will you be able to comprehend that all of this–the shouting, harassing, heckling, stomping, and throwing–comes from a place of respect.

Are we to hold back our emotions within the bounds of so-called “social standards?” Would you have us refrain from chugging energy drinks in our cars for a full hour prior to the game? Should we suddenly stop pacing the bleachers brandishing a pellet gun? Your judgment of us, and accusations that our behavior is somehow damaging to both our own children and any children present, misses the entire point of youth sports: To allow parents the opportunity to bond with their children by humiliating them through our words and actions.

During the day, I am but a humble dental hygienist, but when evening arrives, I am my child’s most passionate fan. That this results in me watching the game, blacking out as the eyes roll back in my head, and being told later by police that I hurled an empty bucket at an opposing team’s assistant coach while he was looking at a clipboard is the whole point, and why baseball was invented in the first place. And I can tell, as my child and I share a moment of eye contact while I am led away in handcuffs, that they get it.

My own father used to gallop around the outfield with one of those horse heads on a stick, shouting that he must be in the Wild West, because apparently “everything is legal on this field” while other parents quietly got in their cars and left. And look how I turned out! Perfectly well-adjusted. Now, I continue his legacy, as I adopt the dog my son saw at the humane society for the sole purpose of releasing it onto the field after my son commits an error so it can run to him and he can experience joy before I call the shelter and inform them that I too have committed an error; this dog is a danger to society.

Only in this way can he learn the true impact of mistakes. And therein lies baseball’s greatest lesson: Every mistake you make is the worst thing you’ve ever done. 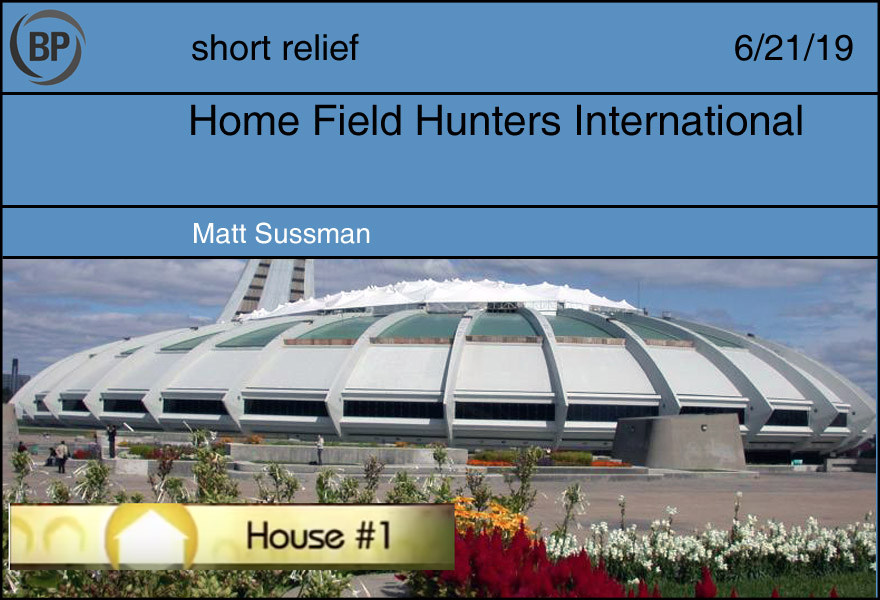 VOICEOVER LADY: Ray is a 21-year-old baseball team in the Tampa, Florida area currently looking for its first real baseball park. His current home in neighboring St. Petersburg is spacious, but is looking for something with more curb appeal.

RAY: My first house will always be special, but I’ve talked it over with our season ticket holders and they both agree it’s time for a little of an upgrade. I have a few must-haves: open concept. But not too much. I would like some space to entertain, perhaps a large scoreboard. Kitchens all over the place. Maybe a retractable roof, if I’m going to stay in the area. My current dome is very difficult to open and it keeps getting in the way of the game. Access to the beaches, because everyone loves home runs hit into them. A couple distinguishing features might be nice. Oh, and I need somewhere to put my rays tank. My all-in budget is fifty dollars.

VOICEOVER LADY: With a huge list of demands and a tight budget, Ray’s real estate agent is going to have to get creative.

A WELL-CAFFEINATED AGENT IN HER MID-40s: I love a challenge, especially with Ray, but I have a few ballparks that just opened up in the market that I think they’re going to like.

VOICEOVER LADY: Ballpark #1 is a former Major League Baseball facility located just a few miles away in Montreal, Canada. It has no list price and the doors aren’t padlocked.

RAY: Wow. I really like the space in here, and there’s a lot of light. It’s in a great neighborhood. It’s a dome … which isn’t exactly what I wanted. But it’s better than nothing. And check out this mascot! How quaint! I might have to change that one out. Oh wow, is this the original Javier Vazquez?

AGENT: Ah yes, it appears he’s made an encampment here. Now you can negotiate with the seller whether you’d like him to be removed prior to moving in, or if you’d like to keep him and make him an opener.

RAY: I have to say, this is a great stadium. I could really see ourselves moving here at least part time. But I obviously cannot move here. I’m committed to keeping baseball in Tampa.

AGENT: I understand. This transcript likely won’t include the wink and nod. I’ll call Jeff Passan and tell him half of that.

VOICEOVER LADY: Ray said oui oui to this magnificent Canadian park, but it’s going to come down to loonies and toonies. After the break, we’ll see how much Ray can leverage his feigned interest into talking down the price of Ballpark #2, plans for new construction in downtown Tampa at taxpayer expense.

WIFE WATCHING AT HOME: Which one do you think they’re going to take

You need to be logged in to comment. Login or Subscribe
Todd Tomasic
Matt-very funny story about the forever house-hunting Tampa franchise. Wanna swap
with lost fans in a lovely ballpark in Pittsburgh? Door's open!
Reply to Todd