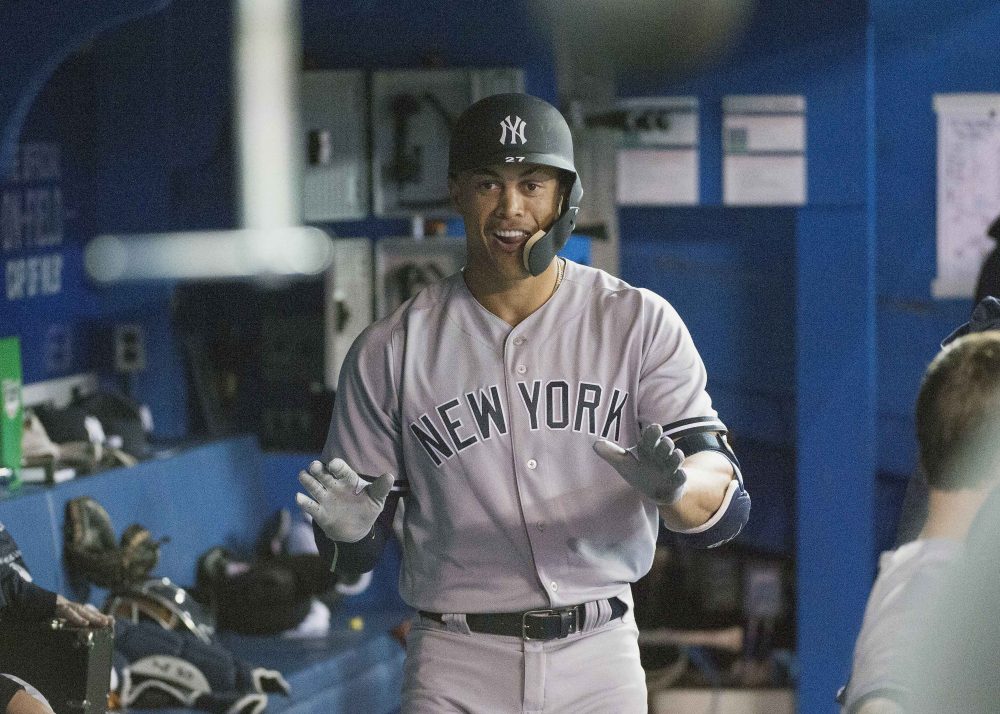 Ladies and gentlemen, we’re back.

A whole lot of dingers.

We’re going to have your daily What You Need To Know column as well. Did you miss the previous day’s action? Do you want to relive the best moments? Just want to know what to watch today? You’re in the right place.

Welcome back. Pull up a chair and stay a while.

Remember when I said a whole lot of dingers? I meant it. Homers have gone up ever since they totally didn’t juice the ball. We’re headed for some sort of home run entropy. God help us. We’re living in a daily loop of that scene from The Simpsons where Homer is strapped to a machine that constantly feeds him doughnuts in hell.

Until that time comes, though, enjoy the home runs. Rather fittingly, this is how the season began.

This probably isn’t a result of a juiced ball. Ian Happ did this a lot in spring training and, really, the Marlins just suck. Jim Deshaies basically told you what was about to happen. This wasn’t hard to see coming. That doesn’t make it any less awesome (unless you’re a Marlins fan). The Cubs hit a few more balls over the fence in this game, and won 9-4. The Marlins began their solemn march toward a top pick in next year’s draft and have a ridiculously inexpensive roster. So at the end of the day, who’s the real winner here, right?

Aaron Nola threw 68 pitches in his outing yesterday. That’s a low total for an Opening Day starter. It would lead one to believe that he imploded and left a mess for someone to clean up.

That was not the case. Nola exited with a 5-0 lead after recording 16 outs. He was not injured or ejected. Gabe Kapler simply decided that because he had a nine-man bullpen at his disposal (in part due to the fact that Jake Arrieta is still tuning up and has not been added to the roster), he would avail himself of it.

It should be noted that a group of big-league pitchers should theoretically be able to get eleven outs without coughing up five runs. The Phillies do not have what one would consider to be an exciting bullpen, but Kapler’s move was not entirely without logic. It’s early. They have an enormous bullpen. Save the bullets in Nola’s arm for later.

The bullets were saved. The game was not.

Nick Markakis, who hit just eight home runs last year, put the cap on what was a truly spectacular meltdown. Kapler didn’t use Pat Neshek in this game, one of the two established back-end relievers he had at his disposal. Why Edubray Ramos was in the game, when he was, is unclear.

Again, Kapler’s logic is apparent. It also feels too cute. A group of big-league relievers should be able to hold a five-run lead. Yet it’s also theoretically part of a manager’s job to know who those relievers really are.

The greatest pitcher of our age was on the mound yesterday. And no, folks, I’m not talking about Matt Albers.

Clayton Kershaw took his rightful place at Dodger Stadium. He didn’t have an overly excellent outing, allowing too many baserunners for comfort and giving up a home run to Joe Panik. That one run would be enough for the Giants to prevail, as Ty Blach managed to outduel the former MVP.

He didn’t outhit him, though.

Kershaw knocked two of his team’s six hits, because baseball is dumb.

You know what? It’s Opening Day. You get two.

Matt Chapman is a name you should know by now. If you don’t, there’s probably a bunch of fan-made highlight reels on YouTube. He could be the best defensive third baseman in the game:

There were two rainouts, which means today’s Opening Day in Detroit and Cincinnati. We’re going to recommend you watch the game in the latter city, largely because it’ll feature Max Scherzer. The Washington ace is one of the best pitchers to watch in all of baseball, and he’ll get to try to keep Joey Votto off base.

For your first evening game, consider checking out the Yankees and Blue Jays. The explosive New York lineup got off to a fine start yesterday, and a newly healthy Aaron Sanchez will try to contain him. Sanchez is just a year removed from leading the AL in ERA. Masahiro Tanaka will take the mound for the Yankees.

Once that’s done, tune in to the Dodgers and Giants. The always-entertaining Johnny Cueto will face off against Alex Wood in one of the better pitching matchups. If you’re a prospect enthusiast, it’s worth noting that Joey Lucchesi will be making his big-league debut for the Padres in that same time slot.

You need to be logged in to comment. Login or Subscribe
tearecrules
Kind of surprised George Springer didn't rate a mention. It's not often a "First Time Ever," thing happens in a 100+ year old game.
Reply to tearecrules