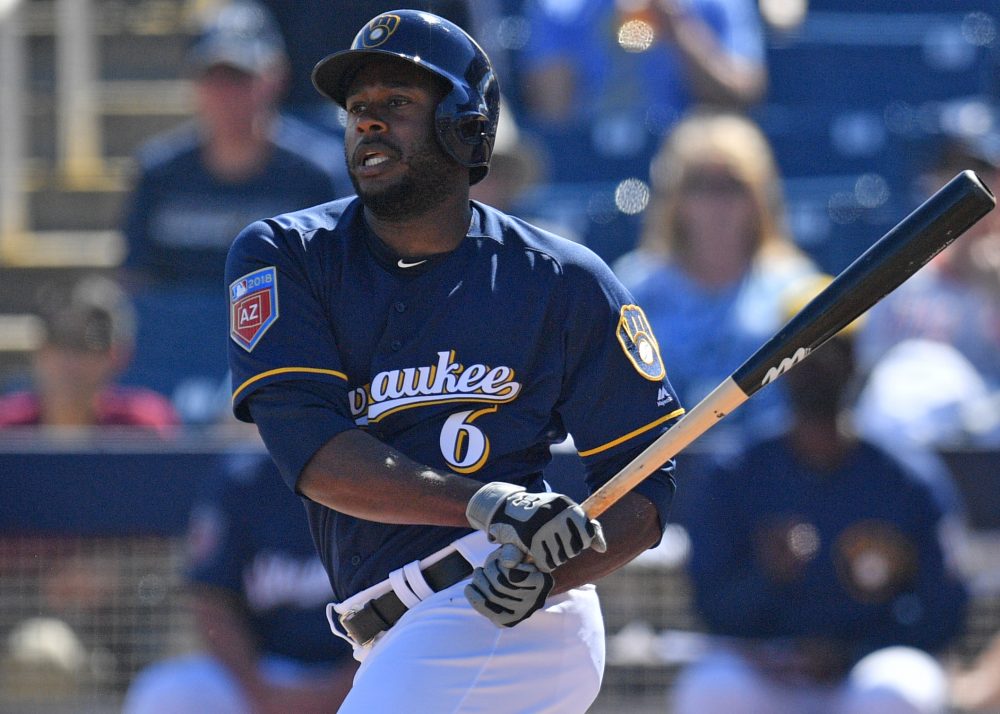 Nicholas Zettel: So the Brewers went big this year by adding Lorenzo Cain and Christian Yelich to their outfield. We all had “acquire outfield help” on our offseason to-do checklists, didn’t we?

Jack Moore: Yeah, this was an offseason of the unexpected for me in more ways than one. First, I was convinced that the Brewers were going to join the rest of the league in staying aboard the austerity train. General manager David Stearns was part of an Astros organization that was very patient about making its moves even after its core started to emerge. I wasn’t sure this front office would be as encouraged as I was by the 2017 team’s performance, and I thought they may try to spend another year or two amassing assets and playing it slow before making the kinds of moves you mentioned above.

And then, I was absolutely convinced that if the Brewers did find the bravery to make a major move, it would be for a starting pitcher. The injury to Jimmy Nelson made the pitching staff the obvious weak point of the team, at least from the outside looking in, and with players like Yu Darvish and Jake Arrieta on the free agent market, the Brewers had options to pounce without committing prospects.

Instead, not only did they sign Cain to a five-year contract, giving them a glut of outfielders, they also cashed in a significant chunk of the farm system they’ve been building to acquire Yelich. The moves to fill the rotation, meanwhile, have been smaller: Jhoulys Chacin was the only multi-year signing the Brewers made on the pitching side, and veterans like Wade Miley and Yovani Gallardo are there as stopgaps more than anything else.

The Brewers juked just about everyone this offseason, but I think it’s hard to argue with the spoils. Cain is one of the rare high-end center fielders to hit the free agent market, the kind of player you genuinely see available (without a huge prospect cost) maybe two or three times in a decade. Yelich, meanwhile, has the tools to be a perennial All-Star, and I’m fascinated to see what he can do now that he has been freed from both Miami’s brutal lineup and one of MLB’s worst hitter’s parks. And sure, the Brewers have a lot of talented outfielders now, but there’s a strong argument to be made that both Ryan Braun and Domingo Santana would be best used in part-time roles. The flexibility this team offers will give manager Craig Counsell a lot to work with on the bench. The only possible concern is in the pretty large opportunity cost it took to bring on Yelich.

Zettel: To my mind, the difficulty in assessing the Yelich trade lies in whether you look at the trade cost alone, or the trade cost and the full context of players in Milwaukee. I agree with your overall assessment about the depth, and am especially thrilled that the Brewers finally appear willing to enter the season with a Dodgers-esque team: there are apparently more players here than anyone knows what to do with, which means the Brewers will be well-equipped to weather injury storms and almost any game situation they encounter.

You mention the austerity train, and I think it’s interesting that the Brewers are viewed as one of the only teams to pay “market price” for players this year. But that sentiment about “market price” does not necessarily work with either Cain or Yelich. Cain probably should have earned $20 million more, and Yelich has a contract that basically makes him worth any prospect package on the planet. Given that even a Lewis Brinson/Corbin Burnes/Keston Hiura package would not have been an overpay for the Brewers, I think they acquitted themselves well in landing Yelich at the Marlins’ asking price.

Given the amount of cash and prospects the Brewers spent on improving outfield defense and contact-oriented batting approaches, it’s worth thinking about this set of moves as improving the pitching staff in terms of run support and defense. This is a set of moves that makes the team better all the way around the diamond.

Moore: Yes, absolutely. This team should have one of the best outfield defenses in the majors; between Yelich, Cain, Keon Broxton, and Brett Phillips, the Brewers have four outfielders who are capable of playing all three positions at a high level.

I think even before these moves, most observers would say that the strength of this team was the position player side. After these moves, I don’t think there’s any doubt that most opponents will fear the lineup more than the pitching staff. Chase Anderson will be starting for the Brewers on Opening Day, whereas the Milwaukee lineup could very well feature a scary hitter like Eric Thames or Domingo Santana as deep as sixth or seventh in the order. And as you said, they should improve substantially on defense, and it’s not like this was a bad defensive team last season—they were slightly above average according to BP’s defensive efficiency numbers.

The lack of top-level starting pitching talent is, I think, the most glaring weakness of the Brewers as a playoff contender. Any contender would be happy to add Anderson or Zach Davies to their rotation, but I think few are comfortable with those two as the anchors. Anderson is 30 and hadn’t ever posted an ERA below 4.00 before last season; Davies has never posted an ERA or FIP below 3.70. That’s why I thought Darvish and Arrieta made obvious sense as targets this offseason, but Stearns and company haven’t really shown much of an interest in making a move for someone to displace Anderson or Davies atop the rotation. Why do you think they’re so comfortable with the talent on hand?

Zettel: I think you’re correct to question top-level starting pitching, as we’re looking at a group of pitchers without extended track records of success, without velocity, and without a big strikeout profile. This is going to sound like a total cop out, but I suspect that one of the ways this front office and coaching staff is “analytical” is in building a systematic approach to a pitching staff. We kind of saw it in 2016, when Junior Guerra got a big chance, and the front office stuck with Davies, Anderson, and even Nelson while working on adjustments. That rotational group took a huge step forward in 2017, and I suspect the front office is more interested in collecting a set of “prototypes” or “scouting profiles” than proven track records.

I wonder if these systematic approaches can simply be linked to a desired trait such as finding ground balls. Looking at PECOTA estimates, for example, Corbin Burnes, Jhoulys Chacin, Zach Davies, Yovani Gallardo, Wade Miley, Jimmy Nelson, and Brandon Woodruff are among the Brewers pitchers projected to produce solid ground-ball rates. That’s a sizeable portion of the rotation depth, including some of the most important starting arms and potential midseason promotions from within the system. So while PECOTA doesn’t really “love” any Brewers pitcher, the projections also feature some strong underlying traits.

Moore: Here’s the thing, I think that’s an acceptable approach if you see this as a team that is still building and targeting a contending window that a) isn’t quite open yet, and b) will be open for years to come. I also understand why one would see the Brewers in this respect. They came oh-so-close in 2017, but were very much ahead of schedule. Their farm system has been improving and should be close to graduating impact talent. The end of the decade and beginning of the next one look like the time to strike.

But, personally, I reject the idea that competition windows open and close in such a clean and orderly fashion. Almost every single impact player from the 2017 squad will be back in 2018 and most of them are either enjoying their peak or approaching it. I highly doubt the Brewers were expecting to or planning for competing this quickly. That’s why I was pleasantly surprised to see they were ready to adapt to some of the unforeseen improvements from last season and approach this offseason like a contender.

It’s also why, despite the fact that everything you said above is eminently reasonable, I still wanted the Brewers to be in on Arrieta at a paltry three-year commitment for $75 million, and why I was still hoping until yesterday that they’d make a play for Alex Cobb. I don’t think there is such a thing as too much pitching. I also think it would be a good move from a long-term perspective as well—the 2019 free agent pitching market is pretty bare and nothing about the current behavior of MLB teams suggests there will be many enticing young pitchers reaching the free agent market in the years to come.

There’s one other important reason why I think it was smart for the Brewers to invest heavily this offseason, when they are arguably on the cusp of contention: Tanking loses its effectiveness when it becomes en vogue. Now instead of two or three teams saying, “Meh, there’s always next year,” we have about a third of the league giving up before Opening Day. No longer will such an approach guarantee you a top draft pick. With this many teams “competing” for that top draft spot, it might not even guarantee you a protected draft pick at all. And then, what’s even the point of losing?

It used to be that teams could capitalize on the fact that these draft picks were undervalued. Now, it’s the free agent and MLB-ready players with three or more years of service time who are undervalued. Just because that bucks sabermetric conventional wisdom (a phrase that should be an oxymoron) doesn’t mean it’s wrong.

Zettel: It’s difficult to argue with your point, especially in terms of the 2018-2019 free agent class, or that there is never too much pitching, so I’ll leave with noting that there’s a great tension in your point. The Brewers kind of built this fantastic “in-between” in 2017, neither rebuilding nor “going all in,” and I think your argument outlines the difficulties in placing that strategy within the en vogue views on MLB roster building. The Brewers are a new frontier.

You need to be logged in to comment. Login or Subscribe
Jeff F
Just because that bucks sabermetric conventional wisdom (a phrase that should be an oxymoron)

Maybe that should be an oxymoron. But bucking that sabermetric conventional wisdom is probably the new moneyball. Maybe sunflower seed and chaw spitting types have an advantage again. Who knows - maybe even small ball??
Reply to Jeff