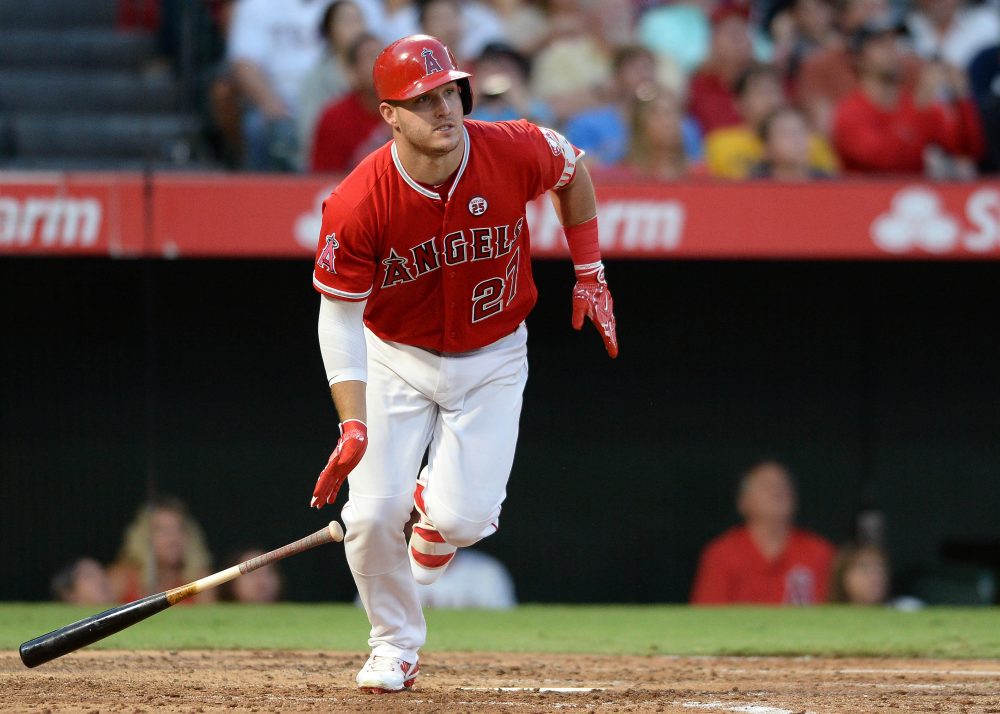 Over at the BP Prospect Team, we’ve spent the last six months or so writing scouting reports and making rankings and talking largely in vernacular that feels like it could be inscrutable. All of these lists and reports have grades called “OFP/likely” on the 20-80 scale. We just sort of assume you know what it means, or can glean from context.

But what can you, the reader, actually tell me about OFP? You might know—if you clicked on this article, you probably even do know—that it stands for Overall Future Potential. We have a section in our glossary defining it—a section that was written nearly a decade ago, and uses it in a fashion slightly different than how we use it today.

I suspect everyone subscribed to BP is at least somewhat familiar with PECOTA, our longtime statistical player projection system. What you might not be familiar with unless you’ve clicked around a lot on our player cards is that PECOTA doesn’t just spit out “a projection.” I mean, it does—that’s the weighted mean projection, the one that shows up in the depth charts and projected standings and fantasy product. But it also spits out projections every 10 percentiles, starting with the 10th-percentile outcome all the way up to a 90th-percentile outcome.

While each individual evaluator is going to have a slightly different interpretation, I’ve always viewed our grades and terminology in something of a percentile outcome form. They’re a range of projections—OFP/likely covering a particular slice of the most important outcomes for you to know. We’ll get to those shortly, but let’s start all the way at the bottom because there are some points about prospect failure that we don’t get to make often.

1st-percentile outcomes: This is essentially the “acts of god” section. A tiny slice of guys in their late-teens through mid-20s are going to have something absolutely horrible happen to them that leaves them unavailable to play our great and glorious game, or so diminished that they might as well be. Oscar Taveras died. Brian Cole died. Nick Adenhart died. Greg Halman died. Ryan Westmoreland had a cavernous brain malformation. Matt Imhof lost his eye. Brien Taylor punched with his pitching hand. Mike Olt had a terrible concussion. Jason Neighborgall couldn’t throw a strike. It feels heartless to talk about, and you can’t worry about or predict horrible outliers other than to know that they happen and it totally blows.

10th-percentile outcomes: These are the bad outcomes we can worry about. Wade Townsend never recovered from heavy usage at Rice, destroyed every part of his pitching arm worth destroying, and became an online poker pro living in Mexico and later a YouTube blogger. Bad luck, but not really an act of god, and frankly not all that unforeseeable. Brett Wallace’s bat ended up being too slow. Jesus Montero couldn’t make good enough contact. Fernando Martinez never figured out the difference between fastballs and breaking balls amidst injuries. Joel Guzman couldn’t control a wild and long swing. Plenty of pitchers destroyed their arms after warning signs and were never the same.

Essentially everyone who hasn’t established themselves as a decent player in the majors has a 10th-percentile outcome of having no MLB career, or a career so insignificant it might as well have never happened. From an evaluative standpoint, all we can do is talk about guys who have extreme cases or risks, really—think a guy like Hunter Harvey who can’t stay healthy, and has much more than a 1-in-10 chance of getting struck down like this. But you should remember that prospect analysts of a generation past declared Mark Prior the perfect pitching prospect with perfect mechanics and perfect everything, and his arm fell off too, albeit aided by a collision with Marcus Giles and a bad comeback liner. It can happen to anyone.

25th-percentile outcomes: When we talk about a “reasonable floor” or a “fallback role,” this is usually about what we mean. A guy with a likely mid-rotation starter projection can “miss” and still be a useful back-end starter or reliever. A guy projected to be a first-division position player can “miss” and still be a useful utility player or fourth outfielder. We often debate whether these players were technical busts or not, but does it really matter? They made it, a little.

Joba Chamberlain is never going to live up to ranking one spot ahead of Clayton Kershaw once upon a time, but all-in-all he had a few great relief seasons, a few okay starting seasons, and some other flashes of usefulness in a decent-enough career. Jose Tabata feels like an eternal disappointment and was out of organized baseball by his late 20s, but he still had a six-year MLB career as a perfectly fine fourth outfielder. These are usually somewhere around your 1-in-4 bad outcomes for good prospects.

Tool grades really don’t track on a normal distribution, either. In any given season, we can give out dozens of 80 speed or fastball grades, whereas we might only project a hit tool to 80 a time or two a decade. I don’t think this is a failure of the system, per se, but I’ve seen wide disagreement on that through the years, along with countless analyses that try to normalize things and end up missing the mark.

75th-percentile outcomes: Here’s where I peg OFP to, at least in the context of how we at BP use it on reports and lists. I suspect I may get a little technical blowback on this; there are versions of scouting vernacular that combine OFP and likely into one number that is something much closer to the likely number, and sometimes that is called OFP. (This may not be immediately apparent to the reader, but the grading of prospects can take many, many technical forms; for example, there are MLB organizations that don’t use the 20-80 scale at all.)

If I’m casually saying “Joe Dude is a 6” in a conversation with a scout, that’s probably closer to what I mean, and he’d be a “OFP 70/likely 60” on our scouting report. However, in our likely/OFP setup, OFP is definitionally a higher outcome than likely, and this is around where I aim to be on it. We threw OFP 80s on two prospects this past season, Ronald Acuna and Victor Robles. I feel pretty confident that at least one out of every four future Ronald Acunas and one out of every four future Victor Robleses will be a role 8 player if we got to run their careers out multiple times from here.

Of course, this isn’t a Texas hold’em cash game and you can’t run it multiple times to reduce variance, and in saying that we think there’s about a 25 percent chance for either of them, we’re also saying there’s above a 50 percent chance that neither of them will become that player. And yet, we’ll all still have dudes in our mentions if they don’t quite get there.

90th-percentile outcomes: When we talk about “upside,” this is usually around where we mean. Most legitimate prospects have star upside. Top prospects have superstar upside. To bring Acuna and Robles up again, it feels right that about one out of every 10 times, one of them will become a high-end 8, perennial MVP type. It’d take a bit of unexpected development—Acuna would need to absolutely maximize his immense hitting potential, and Robles would need to develop significant power—but it’s something you can see if you squint right. It’s how you can watch Sixto Sanchez on the mound and see Pedro Martinez, to be honest. There’s a chance.

99th-percentile outcomes: These are literally the 1-in-100 best-case scenarios, tougher to hit than runner-runner to a backdoor flush. What’s your personal 1-in-100 best-case scenario? You get the job of your dreams, marry your dream soulmate, become wealthy enough so you don’t have to work unless you want to and neither do your kids, and die happy at the age of 104? Sometimes prospects develop like that, too.

What’s every half-decent prospect’s 99th-percentile outcome? It’s at least MLB superstar. Think Jacob deGrom, Dallas Keuchel, and Justin Turner, players who were projected to be fringe, below-average types right until they got to the majors, or even after they initially made it. Instead, they developed late into role 7 or 8 types, some of the best in the game. Someone has to vastly over-perform even late projections or player development would be far too easy and predictable. Known unknowns and all that. Hell, Turner got claimed on waivers and non-tendered before he turned into one of the game’s best hitters. You couldn’t hit that one without guessing so wildly that you miss on dozens of other calls.

What’s the 1-in-100 high side outcome for a true top global prospect? Are we living it right now? Mike Trout is 26 years old. He ranked in the top three of the BP 101 twice, in 2011 and 2012. By Jay Jaffe’s JAWS system, using Baseball-Reference’s formulation of WAR which likes Trout exactly as much as BP’s formulation of WARP does, he’s already the 10th-best center fielder in the history of baseball, and he hasn’t had his seventh full season to fill out the peak score of JAWS.

At 26, Trout has already had a median Hall of Fame career by the best metric we have to evaluate such things. Barring life-altering injury or unexpected collapse, there are few outcomes where Trout doesn’t ultimately retire as one of the greatest players in baseball history; he showed up as a 10-win player in May 2012 and has never been much less than that since. Simply continuing his present pace until his mid-30s will stamp him as arguably the greatest player who ever lived.

You need to be logged in to comment. Login or Subscribe
Jeff Good
This is a very useful read. It should probably be linked to on all the org lists and 101s.
Reply to Jeff
Chris Pence
Agreed.
Reply to Chris