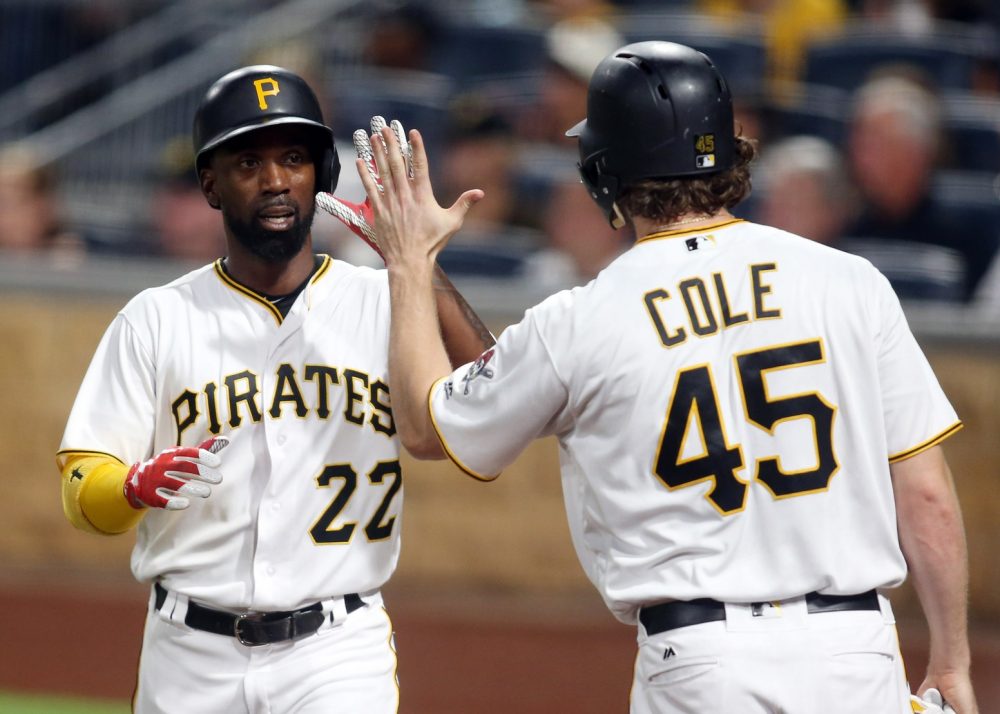 Last week, the Pirates did not trade Gerrit Cole. This was, in a vacuum, hardly surprising: Cole was the best pitcher, if not overall player, on what appeared to be a fairly decent team. And besides, nothing is more emblematic of this offseason than a thing not happening. He had two years left under team control. And while any physical movement from playing catch to opening a door could erase a pitcher’s value in a heartbeat, it wasn’t as if the market was at full boil, for him or for anyone.

Still, this week’s Cole and corresponding Andrew McCutchen trades felt at the same time like one of the purest inevitabilities of the winter, the ultimate symbol of the tax that the losers of history pay to the winners. Half a decade ago, the Pirates appeared to be baseball’s next up-and-coming young team, sporting a stocked farm system and a new analytical bent. Catchers were trying to make balls look like strikes! Fielders were standing in different places than they usually did! If nothing else, it was a clear feel-good story, an organization pulling itself up by its bootstraps. And yet the intervening years have been as kind to Pittsburgh as much of the rest of the country, and now the franchise is in unenviable position: The Cubs are fully armed and operational, the Cardinals maintain their mechanical consistency, and the Brewers—the Brewers!—have stolen their claim as NL Central darlings.

The Pirates saved money. The players they received in return for their superstars demonstrate Pittsburgh’s philosophy on prospects, prizing proximity over potential. The conventional wisdom of the plight of the small-market team is that, without the resources to obtain great players once their greatness is revealed, they’re forced to gamble on riskier investments: the live arms, the toolsy athletes yet to put it together. The Pirates deny this mandate, and have instead chosen to accumulate an army of league-average players, safe and predictable, if not threatening.

It’s a team, like its spiritual protege in Oakland, loathe to tank, and it’s not difficult to understand why. There’s no guarantee that once you’ll submerge, you’ll come back up, and the Pirates spent two decades drowning. But despite the “major league-ready” returns, it’s hard not to look at these trades on January 16 and feel like it isn’t the end of an era, as sad as that concept is. Two decades of waiting. Two decades of paper bags. Two decades of watching Barry Bonds in orange instead of gold. Two decades of Jeff King, and Al Martin, and Kevin Polcovich, and Kip Wells, and Ian Snell.

So the question, as we sift through the ashes: If this truly is the end of their run, is this the saddest “dynasty” in baseball history?

I did some less-than-gory math to find out. I defined a dynasty, for our purposes, as a span of seasons in which the team had a dry spell of at least three years and then made the playoffs multiple times, before going back into another dry spell. Then, I tried to define sadness. This is, admittedly, a relativistic concept, but for my purposes I considered the following five elements, weighted equally:

Compared to most people, I probably place a greater emphasis on regular season record than postseason record when considering success. A 100-win season is worth more to me, in terms of happiness, than an 11-win October. After all, failure in autumn is agonizing but temporary: its effect is a desire for revenge, not ibuprofen. You can only find true despair in a lost August. But because of our accolade-driven culture, I defer and give postseason results slightly more weight. You may adjust values to your own content.

I also considered the following results worthy of immediate disqualification for a sad dynasty: winning the World Series even once, as well as being above .500 for more than six years (the 1980s Angels and Astros, for example, weren’t sad; they were just solid teams) between droughts. You’ll also find that this list slants modern, both because there are more teams and because there are more playoff spots to earn; if you feel like the late-1960s Giants, who won 90 games four times without a division title, deserve a mention, then this is their mention.

Based on these subjective standards, the saddest five dynasties in baseball history:

The Cubs were, by this point, getting fans’ hopes up every half-decade, so despite the heaving weight of 1908, this particular run wasn’t as crushing as MVP Ryne Sandberg or Bartman. Still, the idea of a historically thrifty Cubs franchise succeeding through heedless spending, led by its gold-plated star Alfonso Soriano, just felt too good to be true. And when the teardown came and payroll was slashed, one had to wonder if the franchise had seen its best chance swept away in two three-game NLCS appearances.

It’s very strange to look on the Reds of just a half-decade ago and see a rotation stocked with … Bronson Arroyo? Mat Latos? Homer Bailey? And they were all actually good.

Really, the Reds of 2010 are the closest comp for the Pirates of 2013: a decade languishing in the NL Central basement, the development of Joey Votto and Johnny Cueto, strained patience, everything assembling, and then disassembling just a little bit quicker than people thought. The current Reds are just now emerging from their rebuild right as the Pirates descend, yet again serving as an easy comparison. The results of both will be informative.

This exercise is already stretching the word dynasty to its linguistic limits, and including the Padres here only exacerbates the problem. They never cracked 90 wins during their peak, and one of their division titles was an 82-win participation trophy; glancing at their rosters, it’s hard to imagine extracting even that many wins, until one remembers that this was the peak “bottomless well of relievers” Padres. Still, it’s hard to get too emotional about their run, since it barely rises above the general waterline that is San Diego fandom. Or, another way: every Padres team ever ties for third on this list.

The Rockies don’t really fit this assignment. Their 2007 late-season run, in which they won approximately 48 straight games before getting swept in the World Series, was one of the truly underrated logic-breaking moments in baseball history. It feels less like an era than a meteor landing on a car. Still, the names on that roster—Troy Tulowitzki, Todd Helton, Kaz Matsui—all felt like they should be part of a generation of Rockies success. Instead, it was Jeff Francis who proved to be the true symbol of the team.

And here we are. Despite having the best record at their peak of any team I bothered to compare for this article, the Pirates easily took first place, thanks to their despair they rose out of (five seasons barely scratches the surface) and the two Wild Card exits.

Every team, every moment has its roads not taken; every person has dozens of moments that, if they wouldn’t necessarily take back, they could at least imagine a different course. What if LaValliere had put down the tag? What if the Pirates had bought at the deadline in 2015, or any of the others? What if I hadn’t signed that application for grad school? It’s a game you can play forever.

But there’s something special, something otherworldly about the Pirates, something difficult to name. A sense of predestination, maybe. Every murder mystery needs a body, and so does every sport: something to remind every fan that this isn’t scripted, that there is no justice, that there’s no reason a team can’t keep failing forever.

You need to be logged in to comment. Login or Subscribe
maphal
Those Pirates teams made one shrewd trade or signing after another and all seemed to work out for about 2-3 years. Revive Burnett and Liriano? Sure. Russell Martin .400 OBP? Yep. Winning 98 games and being rewarded with a WC game against Madison Bumgarner sucks. Hopefully it won't be another 25 years before the team contends again.
Reply to maphal
Barry Rubnowitz
I would vote for the 1997-2000 NY Mets as the top of this list. A four year stretch with a .565 winning percentage which yielded no division titles, one LCS defeat, and a World Series thumping by the Yankees, which deprived Mets fans of every shred of pleasure the season gave us. Trust me, that was really sad and still is.
Reply to Barry
Patrick Dubuque
They were in the running! By my system they finished seventh, mostly because of their World Series appearance (trust me, as someone from Seattle, it matters). But when it comes down to it, one of the things to take away from this exercise is really the brutal nature of the Wild Card game: if the Mets had made that run five years later, they may have been bounced twice and risen to the top of the charts.
Reply to Patrick
Barry Rubnowitz
Oh, I understand the WS thing - I still haven't gotten over 1988. But this is a unique situation. I have a friend who when the Phillies played the Yankees in the Series couldn't figure out who to root for. As he put it, it was like choosing between Hitler and Satan - our existential enemy vs. our eternal enemy. The Met losing to the Yankees was all that pennant represented to us. That we went South right after it just left the open wound festering. We don't think of that the same as 2015, where we also lost 4-1. That was okay, we won the pennant.
And how about the 2005-2008 Mets, where, sandwiched between stinking, we had a stretch where we played .553 ball, won the division, lost a game seven of the LCS, then had one of the worst collapses in major league history to blow the division, then followed that up with another September collapse to lose the division. Now that's sad.
Reply to Barry
jfranco77
If you made the criteria "regular season wins 10 years before window" or even 15 or 20, the Pirates probably still top the list. Though only because the Royals won a World Series.
Reply to jfranco77