Bobby Doerr died this week at the age of 99, having spent almost four decades of his life working in Major League Baseball in some capacity. He was a remarkable player and person, whose life, like so many others, cannot easily be summarized by one highlight or anecdote. But baseball easily lends itself to narratives, bending to the will of the writer, and from the shaping of Doerr’s narrative emerged one of baseball’s favorite motifs: time. Baseball fans and writers love the concept of time, how the game is marked by the passing of days and years while possessing a timeless quality. And so, to contextualize Bobby Doerr, we turned to time and to a specific fact: Bobby Doerr was the last remaining player to have played in the 1930s, and more specifically, against Lou Gehrig. 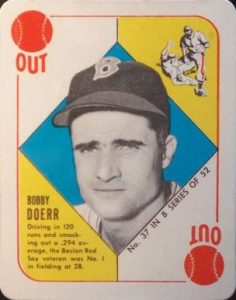 Bobby Doerr entered the league in 1937 at the age of 19; Gehrig was 34, in his 15th season, and two years away from being forced into retirement. Doerr was young, slightly disappointing, and still five years away from becoming a star; Gehrig was coming off an MVP season in which he led the league in home runs and OPS. There was little indication of where each would be in two years or the link that would emerge decades later.

Over Gehrig’s final two seasons, the pair played 37 games against each other, the final of which, the 1939 season opener on April 20th, was viewed by many as the first evidence of the end of Gehrig’s career. In particular, a number of writers pointed to one exact moment that showcased Gehrig’s decline: Gehrig fielded a Doerr grounder, but Doerr managed to knock the ball out of his glove, safely reaching first.

This week, more than who they were as players and people, it is time that shapes our understanding of these two men. We are reminded of how little of it Gehrig possessed and how it gave itself over to Doerr, until such a time when it became the link between the two.

The late Monty Hall’s “Let’s Make A Deal” was revived in 2009 starring Wayne Brady, but before that, it was less successfully revived in 2003 with host Billy Bush. There’s barely any video evidence except perhaps in spots on the dark web. The concept of all the shows’ iterations was the same: contestants were chosen from the studio audience if they dressed up in costume then took shots in the dark at games of chance to win great prizes, sometimes behind large doors. This is not unlike some managers bringing someone in from the bullpen.

One of the Bush era episodes featured Matt Herges showing up and throwing a fastball against the radar gun. What the contestants then had to do, according to my recollection, was choose to bet on whether the contestant could throw harder with his dominant hand than Herges with his left (non-throwing) hand. I really don’t remember who won, but my guess is that nobody won, as this version of Let’s Make A Deal only lasted three episodes. Probably because they booked a relief pitcher for a primetime game show in 2003. Classic blunder. The only middle reliever anyone wanted to see back then was Mike Remlinger, and we didn’t appreciate Chad Bradford in film until later. No doubt Herges, who went from the Expos to the Padres that offseason, was the first one to call the producers back.

Contract purchased by the Cleveland Indians from Class AAA Columbus. [May 2009]

A #baseball game: the crack of the bat & the roar of the crowd are all sounds you WON’T hear in this #game of My Husband Sounds Like! #LMAD pic.twitter.com/uYTkLnvS5g