The Meter of Omar Vizquel

At first, it lands on the ear as one sound, somehow wide, somehow taking up more space than such a singular snap of ball into glove is wont to do, and it takes the eye to understand: it is not one sound, but two, a trochee, double-tapping ear and eye in quickest succession, harder and then soft. And such it must be, for there is no into for this glove, no arrested arrival, no moment of rest. There is only redirection, a moment of calculus made beautiful by its circumstance: the thrown ball arrives to a glove a hundred years old, and the hand inside it is Omar Vizquel’s.

The glove itself is not made for catching—no trapping web, no smoothly curling fingers—but it is made for this particular music of transfer, from padded palm to throwing grip. Why Omar Vizquel, now first-base and infield coach for the Detroit Tigers, should be using such a relic in the pregame quiet of Comerica Park, I cannot say. It doesn’t matter. What matters is the sound, the easy grace. Despite the utterance of frustration when one gets away from him, one imperfect shifting, I feel a certain intention in my heart; the mistake is so I can cope with what I’m watching, so I’m not lulled into this perfect rhythm forever. It’s a safety mechanism and a stanza break, the hypnotist’s finger-snap. The misdirection convinces me: I’m looking at a mortal, a fifty-year-old former shortstop, nothing more.

William Blake’s late eighteenth century poem “The Tyger” begins famously with a trio of trochees—“Tyger! Tyger! Burning bright”—and continues in a fitting largeness of rhyme and emphasis with whole universes weighing the stresses. But the meter of Omar Vizquel contains smaller sparks, falling into bluegrass each time he receives the ball, every beat an atom of gold clipped from an ancient glove and the hand holding it.

Where in the World is Jose LeClerc? 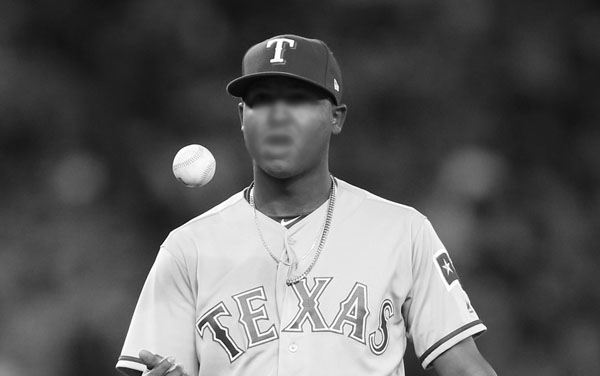 GREG LEE: Welcome to our show, where we will once again be trying to pin down the elusive Jose LeClerc. Chief, what do you have for us today?

CHIEF: LeClerc was last seen soaking up the sun on a big rock in the Mediterranean, and most definitely not pitching in an April 28th loss to the Angels. But if he wanted to bet on the game, he could have just done it from the privacy of his own home; the major export here is online gambling.

GREG LEE: Excellent work, gumshoe! Unfortunately, by the time we made it to the contested territory, LeClerc had already flown the coop. Chief, any clues on where he’s headed next?

CHIEF: Much like the Rangers seem to enjoy slim leads, LeClerc seems to have a thing for small countries. He’s currently in the smallest country in Asia, a chain of twenty-six atolls known for its beautiful fishing and burgeoning tourist economy. It’s probably your favorite screensaver, or a place you like to fantasize about visiting when the bullpen blows a late lead!

RANGERS FAN: I don’t know, the, is it the Maldives? Look, I know he’s on the DL now but I just have some questions about his usage before that, I was told Jeff Banister would be here to–

GREG LEE: That signal means it’s time for our last round! Follow me to the bonus round area! [A mobile bullpen is rolled onto the soundstage. He ushers in the reluctant Rangers fan and locks the door.] Okay, to win, I just need you to pick up this ball and throw it as hard as you can. Go ahead. Just really let it all go there.

You need to be logged in to comment. Login or Subscribe
jfranco77
How does he do that? This is visual proof that Omar Vizquel is actually a wizard.
Reply to jfranco77