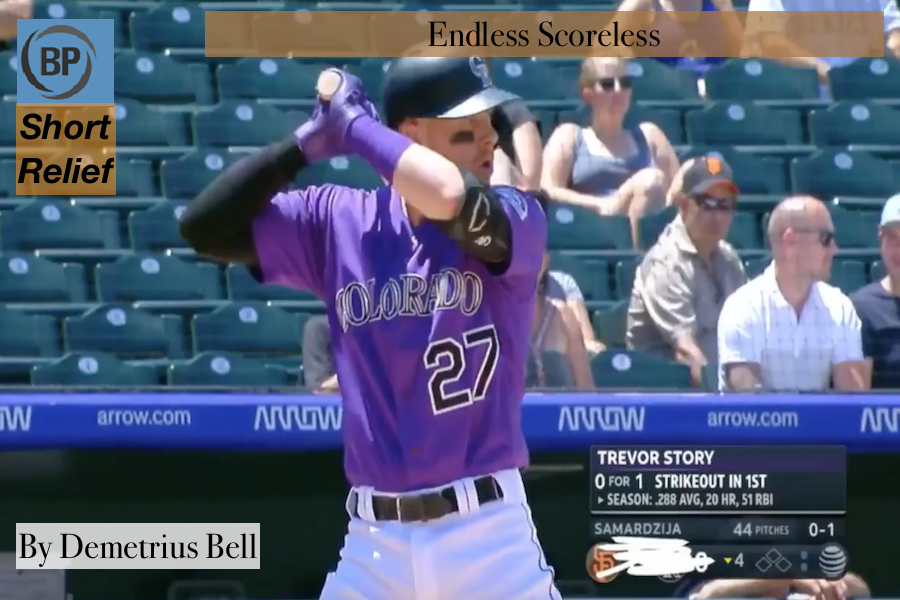 One of the most appealing things to me about baseball is the fact that the game isn’t governed by a clock. There’s no chewing the clock or running the clock out. You play the game until the nine innings are over. I try not to be “that guy” but I will immediately correct anybody who refers to extra innings as “overtime.” It could end after one extra inning and it could end after 10 extra innings. The game doesn’t adhere to a clock, so that means that any potential emotions that result from whatever’s happening in the game aren’t forced to stay within the parameters of normal time.

That’s why baseball’s postseason can’t be beat when it comes to drama. That’s also why games like what happened on Monday between the Giants and Rockies are painful for one team and feel like they drag on for almost an entire week in the span of around three-to-four hours. The game only lasted three hours and fifteen minutes, but it had to have dragged on for an eternity if you were associated with the Rockies in any way.

San Francisco scored five runs in the first inning alone, then they put up seven more in the third inning, added another run in the next inning and they were up 16-1 by the time the sixth was over. If you’re down 15 with a third of the game still left to play, you have to come up with some sort of way to continue on. It’s clearly not your day, and the Rockies didn’t even “win the rest of the game” either, as the Giants put up three more runs from the seventh inning and beyond as Colorado only pushed one more run past home plate from that point.

The Rockies clearly didn’t have a clock to come save them. Again, this is baseball. They just had no choice but to play out the string. There’s no honor in forfeiting, since there’s always a chance that a miracle could happen and they could somehow find a way to pour on enough runs to make a comeback that would be remembered for as long as the sport stays relevant. Once again, there’s no clock so they would have all of the time in the world to go for it.

Instead, the Giants just kept their foot on Colorado’s neck and the game ended in a blowout. So in lieu of any sort of actual comeback, the Rockies’ broadcast just chose another option:

Rockies analyst Ryan Spilborghs is fed up, scratches out on the score on the broadcast (h/t @KAFChi18) pic.twitter.com/UAvrNH9iyH

Act like there was no score at all and just enjoy the day at the ballpark. It’s cynical, but it’s a pure form of cynicism and I can respect that. You have to find a way to pass the time, somehow. 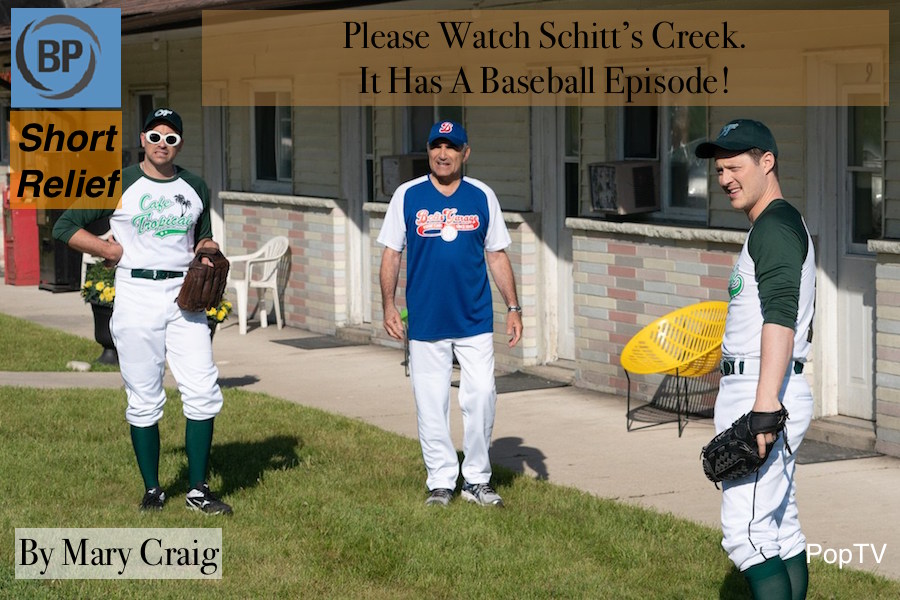 Folks, as you know, most things are perpetually terrible, so let’s talk about something that isn’t.

Schitt’s Creek is a show that on its surface shouldn’t work. In a world in which mainstream media does its best to humanize the elite, a television show about that very thing should be a failure. A show about a wealthy family navigating bankruptcy in the confines of a small town that remains their only asset shouldn’t be a reprieve from the nightmares of everyday life. It should be a show whose tone deafness sinks it before it even airs.

But fortunately, Schitt’s Creek did air and has continued to air for the past 5 seasons, delivering thus far 66 22-minute-long hugs. Thanks to wonderfully heartfelt and comedic performances, Johnny, Moira, David, and Alexis Schitt have become so much more than the premise. We tune in for David’s eyerolls, the way Alexis pronounces “David”, Moira’s half-baked ‘theatre’ voice, and Johnny’s general incredulity, and we become tricked into genuinely caring for these people. Each episode, we root for them to grow, to discover what it really means to live, and to find happiness and love. We find ourselves lost in this world absent bigotry and hate.

An added bonus, then, is that Schitt’s Creek features an episode about baseball, specifically about baseball’s ability to create the foundation for the development of relationships. Despite his harrowing tales of Little League, David agrees to join his boyfriend Patrick’s team which is desperate for a ninth player. Over the course of the game, David plays the most uninspired right field possible in the face of a litany of heckles from teammates and opposition alike.

The one person who doesn’t heckle him is his dad, Johnny, who joined the opposing team when they, too, were desperate for a ninth player. Throughout the game, Johnny coaches and encourages David, despite the futility of this endeavor, becoming his biggest supporter. When this series began, Johnny knew little of his children’s lives and even less of how to demonstrate his love for them, often resulting in awkward conversations punctuated by an exasperated sigh on the part of David and Alexis. That he has found a way to support David in this episode such that David openly welcomes it is a resounding victory not only for the pair but for us, the audience, who are deeply invested in these small moments of growth.

Watching this episode as somebody who has multiple relationships founded on mutual love for baseball, the outcome was hardly surprising, but no less satisfying. The only way it could be better is if its existence among the show’s 66 episodes encouraged more baseball fans to give it a chance. 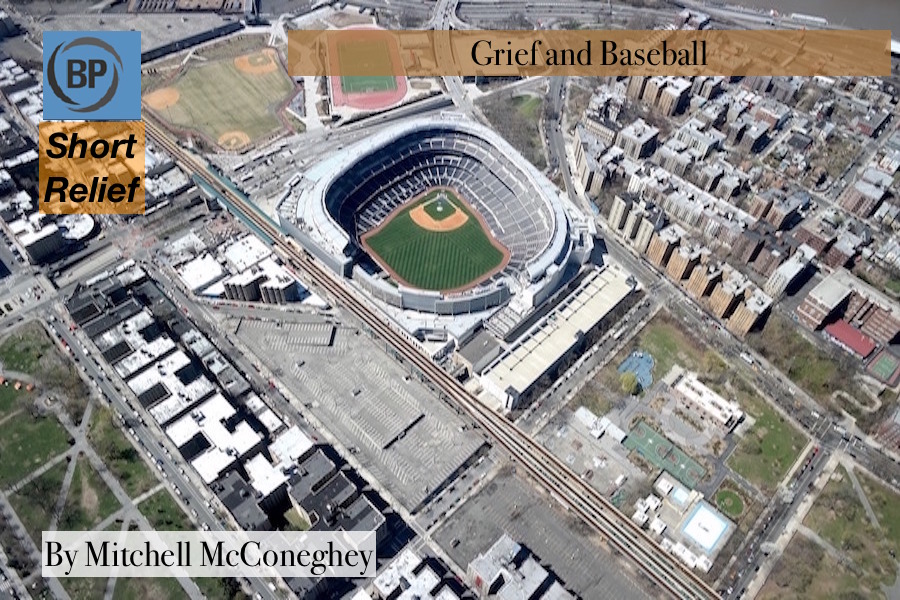 It’s October of 2004. I’ve just gotten out of a preview screening of Ray with my dad, and I’m feeling pretty raw. My dad turns his cell phone back on, and he has a missed call from his sister, so he calls her back. Her husband, my Uncle Paul, has stage 4 lung cancer. It’s terminal. We need to get down to South Carolina. Dad tells me, and I’m just… in shock. But, it occurs to me, baseball is there. If I don’t want to think about this, I can focus on baseball. Baseball can shield me from this, so it’s easier to process. My Yankees made it to the ALCS, even! Memories of The Aaron Boone Home Run dance in my head, and I’m anticipating another World Series. I was born in 1990, I’m used to them by now.

It’s Saturday, October 16th, 2004. We’re driving down to South Carolina, my parents and I. I don’t remember if we rented a car, or still had our old Buick. It’s weird what you remember and don’t remember. As we drive, we listen to the game. Hideki Matsui hits two home runs. A-Rod hits one, and I still kind of can’t believe he’s a Yankee. We’re talking, we’re laughing, we’re pointedly not thinking about why we’re in the car. It’s a 19-8 laugher. Somehow, that’s the night I have the best memory of. I don’t remember watching or listening to Dave Roberts steal that base in the next game. I don’t remember Big Papi’s walk-off. I just remember… grief. Anger. Shock. The funeral. I can’t believe this is happening to my uncle. I can’t believe this is happening to my team. It was one of the darkest times in my life. Baseball was there, but the results weren’t.

It’s April of 2012. I’ve grown up a lot, but I haven’t lost my hatred of the Red Sox. I don’t think I ever will. This time, the family member with the surprise terminal ailment is my grandmother. Again, we’re traveling. Plane, instead of car. Wisconsin, instead of South Carolina. Regular season, instead of playoffs. But again, it’s the Yankees and the Red Sox. Again, baseball is there. On April 21st, most of my family is at hospice care, but I need some time to myself. I’m in my uncle’s house, because he has the best TV. It’s Yankees/Red Sox, so it’s a nationally-broadcast game. The Yankees are down, 9-1. The channel I’m watching cuts away from the Yanks, which I’m fine with, because it means I watch Philip Humber complete the 21st perfect game in MLB history.

Once Humber is done, we cut back to the Yankees, and- wait, what? It’s 9-8? I missed two dingers? Nick Swisher hit a grand slam and Mark Teixeira hit a 3-run shot. The Yankees end up winning 15-9. I dance around my uncle’s living room. Then, I go to hospice care to visit my grandma. It hurts, but it’s not quite as bad as it could have been. My grandma passed two days later. I’m watching baseball again when I find out.

Why am I telling you these stories? Because baseball is always there. That’s its greatest asset. It may not always have good results, but it’s always there, and it’ll always help you get through something. One way or the other.