At the annual Congressional Baseball Game at Nationals Park yesterday evening, one name kept popping up among the participants: Cedric Richmond. Richmond is the Democratic Representative from Louisiana’s 2nd District, covering New Orleans. Republican manager Joe Barton and his Democratic counterpart Mike Doyle both agreed in pregame interviews that Richmond was the best player they’d seen participate in their combined 49 years of involvement with the game. Doyle said, “He’s playing on a different level than the rest of us.” Richmond led his Democrats to a 7–2 victory, leading the way in all aspects of the game.

Richmond has been the ace pitcher for the Democrats since he was elected in 2010. He’s started every game since then and has entertained his colleagues and staffers with the leftover skill he still carries from his college days at Morehouse. His fastball still gets into the low 80s, and he has a curveball and changeup to go with the heat. I didn’t get a good look at the change, but I did see the curve plenty. It had an 11-to-5 shape that tended to roll a little bit, but he had impressive command of it. He mixed his pitches well and garnered lots of off-balance swings on the way to a complete-game victory, the seventh in a row for the Democrats.

Richmond also flashed leather, running over to field a pop up near his dugout. He also hit a deep fly ball for a double, probably about 340 to 350 feet to left-center field on the fly. His manager said before the game that if the Republicans chose to pitch to him—which in recent years they decided not to do, instead opting to intentionally walk him—Richmond would be his bet for the player most likely to clear the fence.

He wasn’t the only person to show some power at the dish, however. Rep. Ryan Costello, a Republican from Pennsylvania, caught Democratic center fielder Patrick Murphy way out of position and hit one over his head for a booming double. Costello said he played competitively until he was 15, when he picked up basketball as his sport of choice. The lanky right-hander started at shortstop for the GOP and was one of Barton’s options for a relief pitcher.

I asked Costello what he’d be bringing to the mound, and he said he would stick to four-seam and two-seam fastballs. “I threw a lot of curveballs when I was younger, and it kinda messed up my arm,” he said. I asked him if he was worried about getting injured, and without hesitation he replied, “Yes!” Perhaps partially for that reason, Costello stayed at shortstop for all seven innings.

As you can see, the Congressmen and Congresswoman (she being Linda Sanchez, a former softball player who hit a ringing RBI single), take the game pretty seriously. Doyle said he and his team had been practicing since April, playing for an hour each morning at Gallaudet University’s fields. Richmond had labrum surgery on his throwing shoulder six months ago and still worked his way back to full health so he could pitch a complete game. There was plenty of head-first sliding, a safety squeeze, and a “watch the seams!” shout from the dugout after an ugly swing.

Everyone’s focus was disrupted for a bit in the fourth inning, when this guy made an appearance: 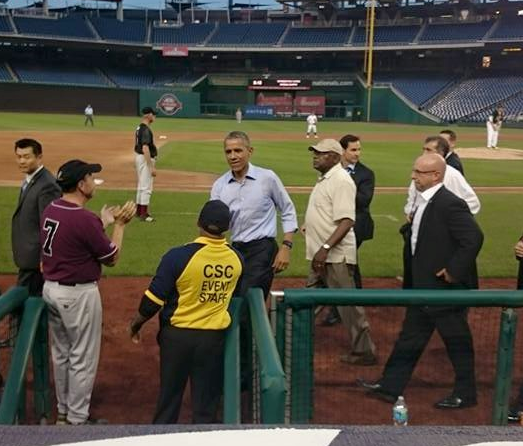 Barack Obama’s unannounced appearance was a surprise to many, but keep this in mind: The Congressional Baseball Game has been around since 1909. That means it predates the seventh-inning stretch and is only a year younger than “Take Me Out to the Ballgame.”

Your thoughts, now that the game’s over, Rep. Doyle?

“I’m looking forward to not have get up at 6 o’clock tomorrow!”

You need to be logged in to comment. Login or Subscribe
Schere
wow, I never wanted to be a Congressman so badly.
Reply to Schere
jnossal
They've been practicing for an hour a day for the last six weeks? Don't these guys have jobs?
Reply to jnossal