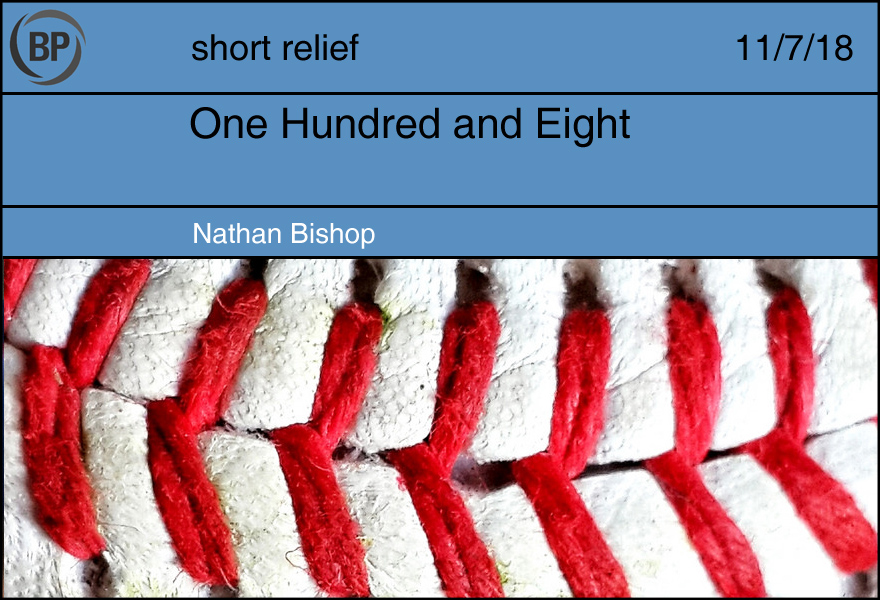 There are one hundred and eight stitches on a baseball. I know because, as a teenager, I used to count them like a rosary, alone in my room, in the dark, far into the night. Often I would count them silently. If I spoke it was a mild whisper. I would sit and feel the braile of the ball, touching each bump sticking up from seam, and then move on to the next. I would repeat this until I hit the magic number, and then usually start all over again. In my head I would replay over and over the day’s events, conversations, awkward mishaps, and small triumphs, until finally my mind and body’s exhaustion aligned and I could sleep.

It has occured to me in the past that baseball, of all the sports, seems to hold a certain sway on nervous, anxious people like myself. To have insight into why that may be would take a deeper, more thoughtful writer to fully understand and explain, but I believe it to be true. The daily distraction, the languid pace, the slow, measurable determinism to a season; all these things play out in a way that allows us to feel able to, while not control, at least measure, catalog, and keep track of. We cannot decide who will win or lose, but we can pretty accurately guess it. It feels, as messy as the whole big, dumb enterprise of a season truly is, something like containable, and that is something someone like me really needs at times to feel safe, to forget, to sleep.

There are one hundred and eight stitches on a baseball. I know because last night was Election Night in a country that feels very close to breaking in a way that I am not sure we can fix. I know because the differences between friends, family, and neighbors that not so long ago felt easily overlooked, now loom omnipresently over every conversation. I know because I have two children, and I know enough history to know the bad places we can go from here if we make bad choices. I know because at 2:34 AM last night I was lying in bed ball in hand, between thirty-three and thirty-four, desperately, hopelessly tired. 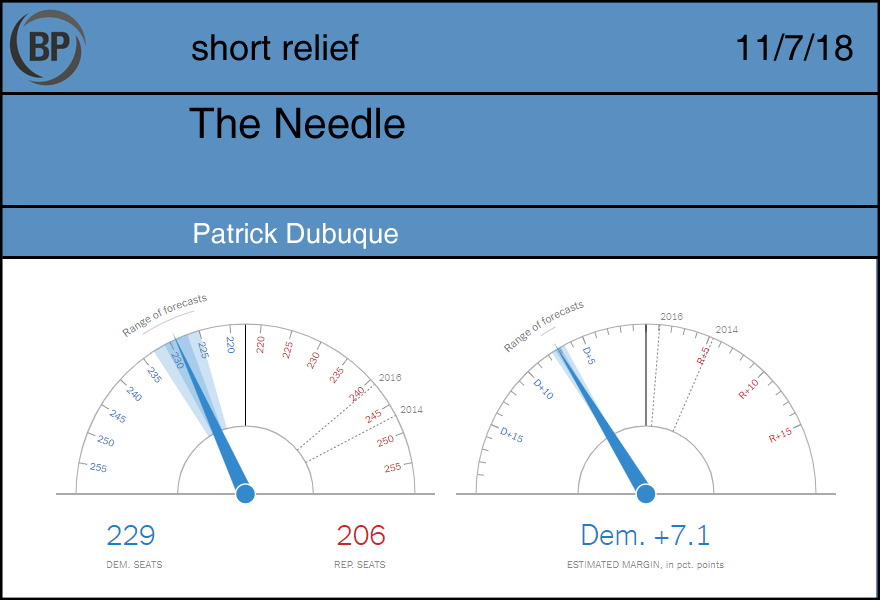 I watched the needle. I admit it.

OK, technically, I refreshed fivethirtyeight.com, in honor of our old pal Nate. I didn’t want to, but my wife was editing the photos from my daughter’s choir recital, and my daughter was decompressing by huddling a blanket with her tablet, and my son was playing with Duplos in that way where he rips the Duplos apart and then gets sad because his Duplos are ripped apart. It’s a time-honored Dubuque tradition, like Don’t Break the Ice, only somehow less satisfying than squeezing all those fake ice cubes in the plastic tray. So I had plenty of time, between Duplo reassembly, to watch the needle.

Everyone hates watching the needle, and everyone watches the needle, because the needle is the purest distillation of sports ever created: a running WPA total that condenses not only victory and defeat, but also identity, purpose, and people’s actual lives. I imagine it must be what sports gambling feels like, if you don’t get a choice and also instead of fifty bucks you have to wager how your country would be run for two years. But that’s not really why I hate the needle. I hate the needle because of its inherent sports-ness, how reductive it is and how quickly and easily it converts us into an audience.

Yesterday morning Jeff Passan reported that Seattle Mariners general manager Jerry Dipoto was considering a full teardown of the major league roster, following an 89-win 2018 and no clear answer of where a 90th win might come from. Hobbled by poor drafts and development and a string of unfortunate trades, the team combines an aging core with a strained budget and a lack of reinforcements. It makes sense to cash in while the big leaguers still have value, and yet for a city a generation removed from October baseball, it’s a hopeless revelation.

Sports are all hope and hopelessness, the most passive of all active verbs. You can’t vote out a team president, or primary a scouting director. We’ve written a lot about how freeing that is, the idea of throwing one’s self to the wind. But politics isn’t sports. It isn’t even elected officials, or government. Politics is the working together of people toward common goals, the emphasis on working, the most active of all active verbs. Even as the internet and the 24 hour news network and the needle have brought the game, and the Capitol, closer to us than ever before, it hasn’t brought us closer to them. It draws attention to what we can’t control, and diverts us away from the people around us, who need us. It’s made scoreboard-watchers of us all.