When Andrew Koo wrote about the rate of position player appearances last August, he noted that while such appearances had hit an all-time high in 2013, he was “hesitant to declare” a pattern based on a single season. Nine months later, though, the pattern is looking pretty clear. Here’s how this season’s total so far compares to the totals for each season since 1977 (before which it becomes tougher to untangle the pitcher-hitter hybrids). 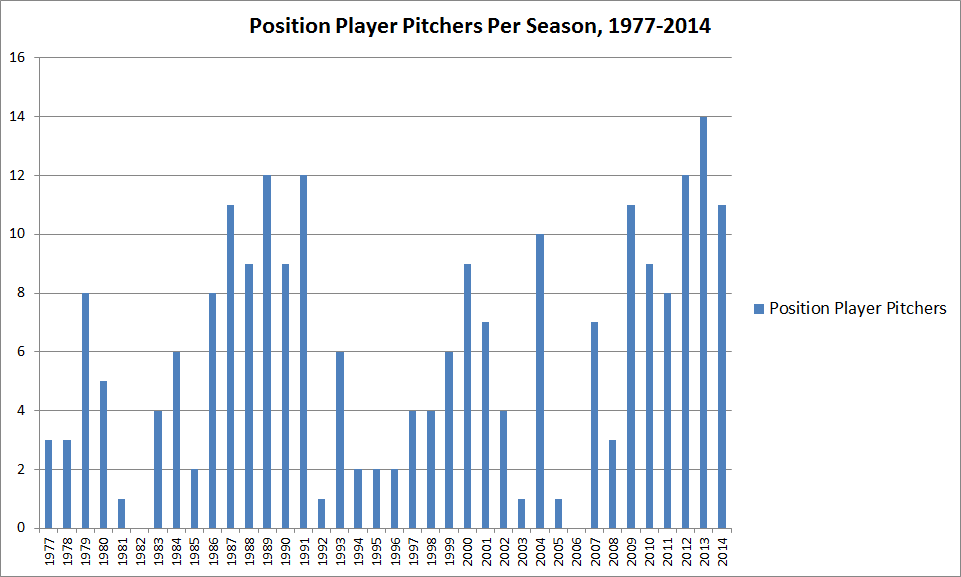 In light of recent events, it's difficult to believe that there was only one position player pitcher in 2005 and 2006 combined. Last season set a new high with 14 position player pitching appearances, and it looks like that record won’t stand long. When Tigers utility infielder Danny Worth broke out the knuckleball on Wednesday, he became the 11th position player to pitch in 2014—and we’re still over a week away from the end of May. There have been more position players already this season than there have in all but six other seasons in the last 37.

So what’s going on here? We know that position players tend to pitch in blowouts; are games being won by wider margins now than they have been historically? Let’s go to the graph: 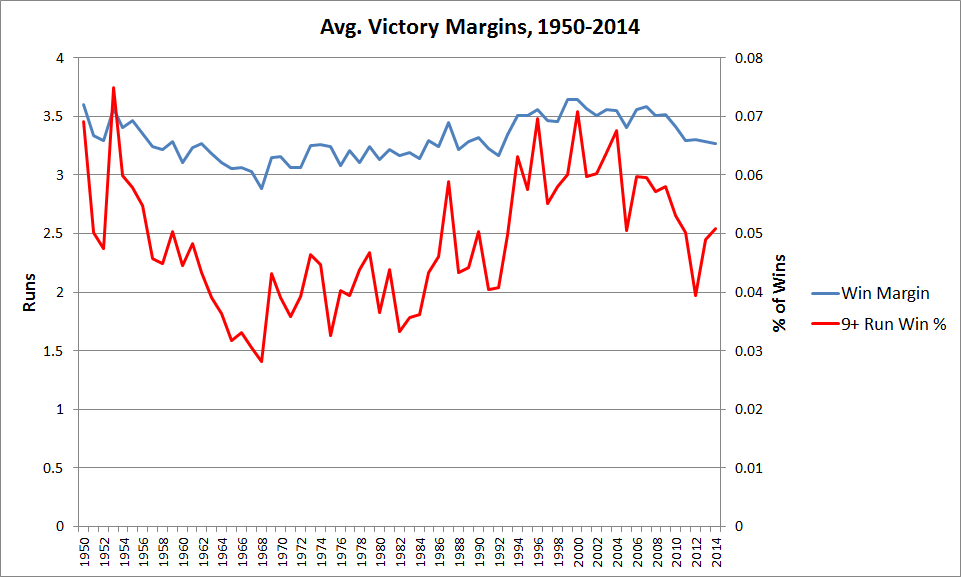 The blue line (on the left vertical axis) is the typical winning team’s average margin of victory. The red line (on the right vertical axis) is the percentage of games won by a margin of nine or more runs. In both cases, this year’s rate isn’t unusual, historically speaking. As one might expect, it’s considerably lower than it was during the high-offense era of the 1990s and early aughts. So it’s not that there have simply been more blowouts, and thus more pitching opportunities for the Danny Worths of the world.

The likely culprit here, as Andrew observed in his investigation of the relatively new phenomenon of extra-inning position player pitching appearances, is the increasingly quick hook that today’s managers employ with their regular pitchers. (Game total for 2014 is projected.) 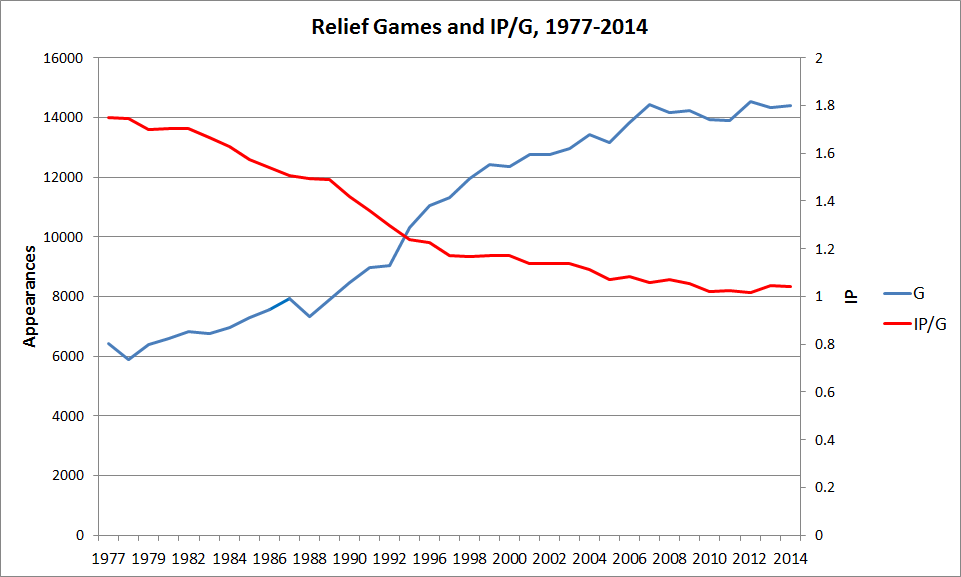 Today’s average relief appearance lasts 1.04 innings and 4.4 batters, down from 1.75 innings and 7.5 batters in the late ’70s. Even though roster construction has skewed toward pitchers to accommodate this trend, managers are still finding themselves out of arms more often than ever, as White Sox skipper Robin Ventura did in the 14th inning of a game against the Red Sox this April, when he gave the ball to infielder Leury Garcia after using four pitchers to get three outs in the eighth and stretching Daniel Webb to three innings. Worth got into yesterday’s game because the Tigers—who played an extra-inning game on Monday (when most teams were off)—went 13 innings on Wednesday and got only 3 1/3 on Thursday from starter Robbie Ray. In circumstances like those, putting in a position player is usually easier than the alternative.

Even though position player pitching appearances are becoming more common, we haven’t seen managers significantly loosen their standards for when to fly the white flag. Ron Roenicke has used position players twice already with the Brewers down six runs, but the average deficit at the beginning of this year’s position player cameos has been 9.5 runs, not much lower than the historical average of 10.2. It seems that managers are simply allowing position players to eat the extremely low-leverage innings that once would have fallen to the bottom guy on the bullpen totem pole. And while we won’t necessarily finish the season with the 30 or so position player pitching appearances we’re currently on pace for, we’re reaching the point where the ability to pull double duty as a competent pitcher, à la Worth or Drew Butera, might actually give a give a bench candidate an edge in an open competition. 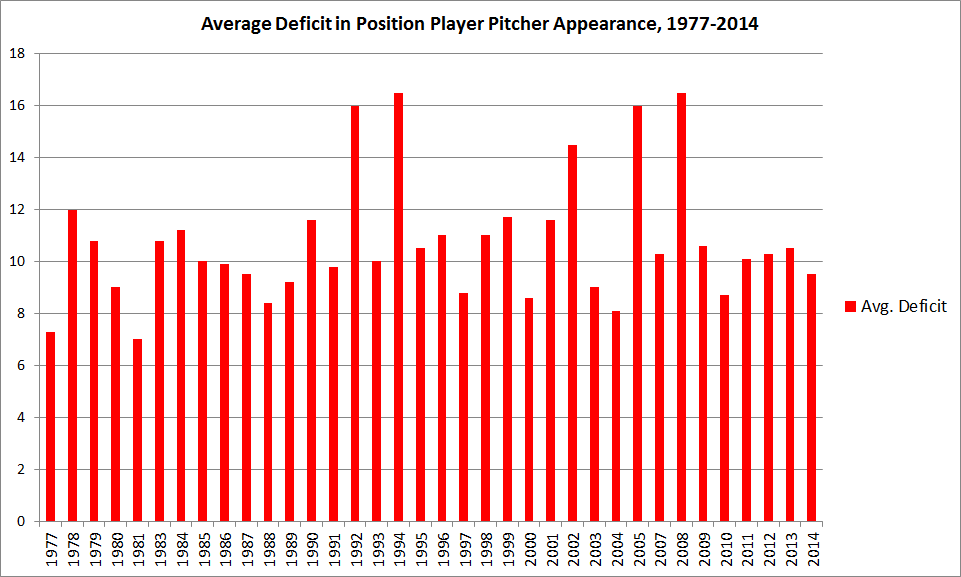 This is probably smart. In fact, the optimal position player usage rate might be considerably higher than what we've seen so far. Even a six-run deficit with one inning to play spells almost certain defeat, so why burn a pitcher who might actually matter the next day when you can use a utility guy, rest your other arms, and distract both your bench and your fans from defeat? On today’s episode of Effectively Wild, Sam Miller theorized that the rising position-player-pitcher rate is reflective of a larger trend: the Astros-ification of baseball, or the increasing acceptance of the idea that it’s acceptable (albeit regrettable) to lose in the short term in order to improve one’s long-term outlook. Sending out Martin Maldonado or Lyle Overbay instead of a professional pitcher when you’re down by six runs isn’t quite the same as spending $26 million on your 2013 roster and winning 51 games, but the concept is similar.

Position player pitcher appearances, at least, offer the added benefit of being more fun to watch than the Astros have been over the past few seasons—though it’s fair to wonder whether they will be when the novelty wears off.

Thanks to Andrew Koo for research assistance.

You need to be logged in to comment. Login or Subscribe
gweedoh565
Another factor in the increasing position-player pitcher trend may be the league-wide offensive decline/rise of the pitcher over the past decade; while the % of 9+ run wins may be down, so too is the perceived (and actual?) ability of a team to recover from a 9 run deficit, since 9+ runs just don't come along very often nowadays.

In other words, in the early-aughts, a team down by 9 runs may still feel like they have a reasonable chance to at least make it close, while in 2014 the odds of even making it close have been greatly reduced.
Reply to gweedoh565
CalWhite
I wonder if the increased use of pitch counts for starters and the subsequent increase in the use of relievers is a factor?
Reply to CalWhite
bornyank1
See the third graph.
Reply to bornyank1