Ron Roenicke: Do we pity him, or envy him? On Monday night, Roenicke used another position player down six runs in a regulation game. Only a few weeks ago, I looked at how unusual it is to have a position player in with that small a deficit—because the Brewers were in the same situation. Luckily, it seems that they have a whole stable of position players who can get the occasional out here and there. This time, it was veteran first baseman Lyle Overbay.

Overbay pitched to only one batter (Ryan Doumit), but we got to see a fair bit of his talent and style as a hurler. Apparently, Overbay had pitched some in college, so it was not surprising to see him not look completely lost on the mound.

Doumit worked a full count against Overbay before popping out. He said that the main thing he wanted to do was avoid striking out. Friend of Baseball Prospectus Gabe Kapler may still be coming to grips with the experience of having done so in a 2009 game:

Kapler said previously that hitting against position players is a hard adjustment to make because they are usually throwing “below hitting speed.”

Overbay had very average speed for a position player. He flashed a four-seam fastball and a sinker—the former sitting at 82, and the latter a couple ticks slower. The spin chart shows two distinct groups of fastballs, with the kind of extra run and sink you’d want on your two-seamer. He also threw one curveball (67 mph) that was not all that impressive. In fact, this is kind of how I imagine I’d look trying to spin a curve on a major-league mound:

The pitch had a rolling, slurvy spin pattern to it and was almost literally off-the-charts bad with location: 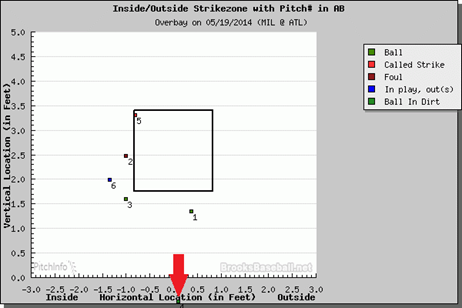 Overbay’s mechanics show little hints of his past as a pitcher, such as a characteristic wrist curl during the stride phase. He wisely kept the rest of his motion fairly simple, with no torque to generate unnecessary power and excellent posture. His control was plus for a position player (aside from the curveball), with all of his fastballs staying close the edge of the strike zone.

After Martin Maldonado’s impressive debut and now Overbay’s appearance, it seems that Ron Roenicke can play right-lefty matchups with his emergency pitchers. But maybe Overbay should work more on that breaking ball, or try a changeup.

You need to be logged in to comment. Login or Subscribe
checkmate
Dan, I think you're being a little bit unkind to Overbay's curveball--Doumit almost swung at that! (And Lyle probably could've gotten it a little closer to the plate with a few more tries). Do you have a view on what the Brewers should do with Wei-Chung Wang (whose destruction led to the glory of Overbay).
Reply to checkmate
oldbopper
The Brewers would probably be much better off if they used positional players instead of Wei-Chung Wang. There might be a more astonishing record through 7 appearances than his but it will take all of BP's tremendous resources to find it. It is tough enough for a team to compete in the majors, much less be a contender, with 25 players but the Brewers are playing with 24.
Reply to oldbopper