In last week’s Lineup Card, I urged the Astros to re-sign Rick Ankiel and test him out again as a pitcher. As I explained, September allows teams to expand their active rosters to 40 men, so experimenting with Ankiel would be less likely to interfere with the “normal operations” of the club. He would also be playing for a team with no postseason hopes. Nothing would be lost for the Astros if he pitched poorly.

Houston has yet to take me up on my suggestion, but it was almost as surprising to hear that Tampa Bay Rays fourth outfielder Sam Fuld pitched in Monday’s game against the Angels. Tampa Bay, unlike Houston, has a great deal at stake in the course of the season. Last night’s loss dropped them 5.5 games behind the division-leading Red Sox and within two of the Orioles in the Wild Card standings. Plus, July AL Pitcher of the Month Chris Archer started for the Rays last night and was backed by a roster that features 20 active pitchers.

The hidden factor behind Fuld’s appearance was manager Joe Maddon. The Rays are skidding, but Maddon’s managerial style seeks to keep the team loose as it prepares for a hard-fought conclusion to the season. Maddon, it should be mentioned, very nearly used Fuld in a previous game. Two years ago, he sent Fuld, who’d pinch hit in the prior inning, out to the mound to warm up as a delay tactic while his desired reliever was getting loose in the bullpen. Fuld should have been required to throw a pitch under MLB rules, but the umpires were apparently unaware of this. Maddon and the umpires were set straight by Joe Torre, MLB’s Executive VP for Baseball Operations.

Fuld threw only five pitches last night, so it’s hard to assign him grades as I have for other position–player pitchers. A few things were apparent, though. His fastball speed, sitting at 87–88, was pretty respectable and on the higher end of position-player pitchers’ offerings. He was also able to locate low and away consistently, which few position players are able to do. And typical of his ilk when substituting for the regular hurlers, he worked at break-neck pace.

Fuld’s mechanics were not ideal, but not terrible either. In fact, I would have believed that he was a professional pitcher if I hadn’t known who it was. Fuld showed decent balance throughout his delivery despite generating substantial arm speed. He wasn’t afraid to take a full stride to home plate, thus shortening his release distance and indirectly adding “life” to his fastball. He was even able to repeat his delivery pretty well considering how rarely he’s been called upon to use it.

But excellence in the art of pitching was not the main purpose of Fuld’s appearance. He was there to help his teammates loosen up. Did it work, Matt Moore? 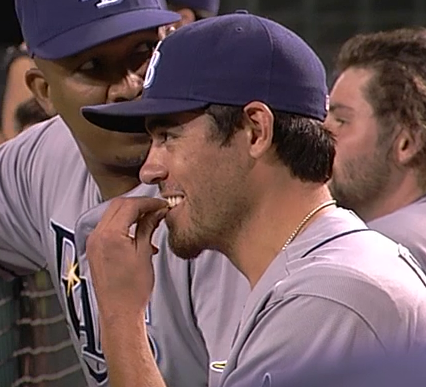 Fuld is a proponent of WAR, which he says “accurately measures hitting, def[ense], b[a]serunning.” Sadly, entertainment value is not something that can perfectly be measured in runs and wins, but if Entertainment Value Over Replacement Player (EVORP) existed, Fuld would have earned a little last night.