“Any time you end up with a position player on the mound, it’s not been a good night,” John Farrell said after last night’s debacle of a game for his Red Sox. From Farrell’s position, it’s hard to disagree. But for a Yankee fan like myself and someone with particular interest in position player pitchers, last night was hilarious. Mike Carp’s pitching appearance was not the first position player outing of the season, but it was certainly the most notable. Most important for our purposes, Carp threw a total of 37 pitches—enough for a tentative scouting report.

Carp is now the fifth Red Sox pitcher in the PITCHf/x era to entertain the Fenway crowd with a knuckleball—after Tim Wakefield, Charlie Haeger, Steven Wright, and Charlie Zink. There was also even a pre-PITCHf/x knuckleballing position player at Fenway in recent memory: Jose Canseco in 1993. Carp is also the second position player pitcher in the last two years to feature the knuckler at Fenway; David Murphy did so last year (in an appearance I scouted). Murphy struck out one Red Sox hitter that night. That hitter was Mike Carp.

On to the grades.

Mound presence
In his post-game comments, Carp had this to say about his temperament on the hill: “Obviously I’m not trying to be too serious out there. Unfortunately, you end up walking a few guys, but it’s definitely a cool experience. … It was fun. Just a rough ball game, but like I said, to get out there and have a little kid’s dream of pitching in a big-league ballgame, especially as a hitter.”

Carp still took things seriously enough to shake off his catcher at least once and look in at the umpire when he disagreed with a non-strike call. He also worked pretty quickly, which was a great service to everyone watching this ugly marathon of a game. He can be forgiven for not checking on Brett Gardner when he was on first base. Gardner stealing with the Yankees up eight runs might have incited a brawl.

Fastball
Carp appeared to have a four-seam and two-seam heater that ranged from 79 to 84 mph—that’s about average for a position player. He did not show good command of the pitch, though. The spin deflection charts show a lot of variation in the horizontal and vertical deflection of the four-seamer, likely indicating inconsistent finger technique on release. The sinker was more consistent and got about 10 inches of run. Can be worked on.

Secondary pitches
Make no mistake: Mike Carp throws a true knuckler. It was 66 to 70 mph, which is in the lower end of speed differentials that knuckleballers have from their fastball.

The beauty of Carp’s knuckleball is that it obeys the cardinal rule to the pitch’s success: make its spin random. Although knuckleballers often say what they try to do is take all the spin off the ball when they throw it, they don’t actually want to do that. Rather, they want to make the spin unpredictable to the hitter. A bad knuckleball will either have no spin deflection at all or will show a strong pattern of spin in one direction.

As you can see below on the spin deflection chart, Carp’s floater had an average spin deflection of nearly zero on both axes, but showed great variation in its actual spin. This is what a knuckleball is supposed to do. For someone who plays around with the pitch, this is pretty advanced. 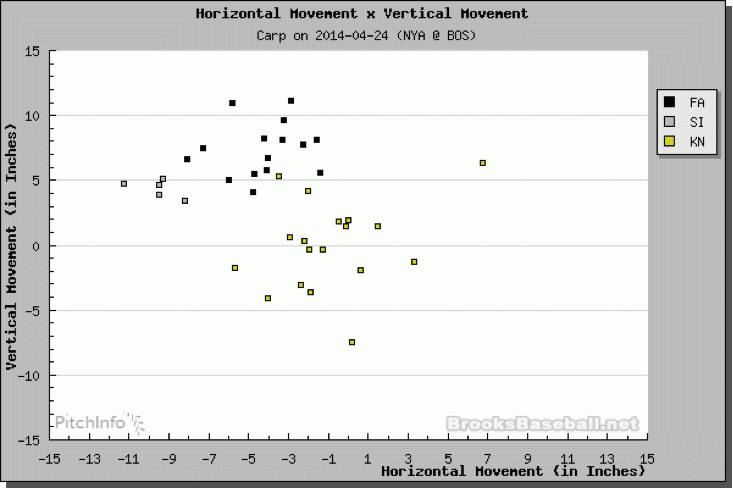 Control
Um… not good. Carp walked five batters in one inning. He also uncorked this thing.

Knuckleballs take years to master so that the chaos becomes controlled. Carp, though, claims he’s already had years of practice with the pitch.

Mechanics
Lately, most of the mechanics I’ve been studying in free time have been those of pitchers getting the dreaded Frank Jobe surgery. It was thus a great relief to watch Carp pitch with a simple, repeatable delivery that showed good posture (at the expense of pretty much any torque). His short stride cost him release distance, but also probably reduced the risk of injury from a muscle not used to the pitching motion.

One thing I originally thought was suspect was the fact that PITCHf/x registered two different release points for Carp. I found the same thing two nights ago in Jose Fernandez, who occasionally misfires his fastball because of mechanical inconsistency. Carp, on the other hand, just changed where he stood on the rubber halfway through the outing: 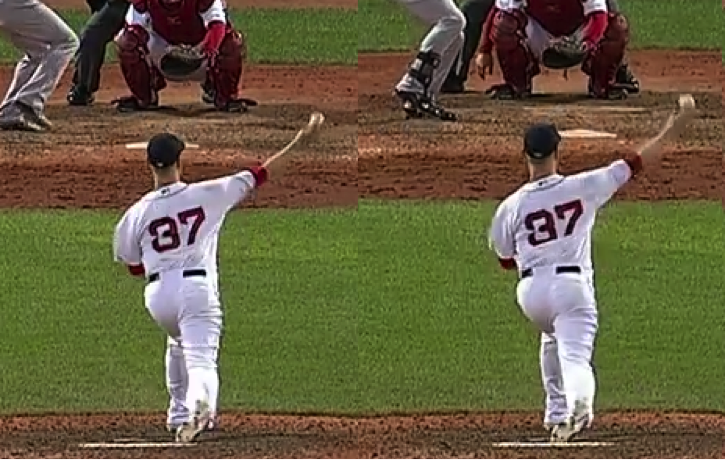 Overall grade: 55 present / 70 future. Carp’s outing was alternately ugly and impressive. With work, he could become one of the elite position player pitcher options—equivalent in effectiveness to a fringe bullpen arm if used sparingly.

You need to be logged in to comment. Login or Subscribe
NoelLang
Loved this, especially the grade at the end. Please do this everytime a position player pitches.
Reply to NoelLang
SixToolPlayer
Thank you, Noel. Duly noted.
Reply to SixToolPlayer