There’s a story about Gene Bearden in Veeck as in Wreck that I’ve written about before. As a 27-year-old rookie in 1948, the knuckleballing Bearden posted a 2.43 ERA in 37 games and 29 starts for the Indians, winning 20 games and finishing second to Alvin Dark in Rookie of the Year voting. But he couldn’t sustain his success. In Bearden’s sophomore season, Casey Stengel, who had managed Bearden during his successful 1947 PCL campaign with the Oakland Oaks, was hired to manage the Yankees. Stengel, the story goes, knew that Bearden’s knuckleball “usually dipped below the strike zone after it broke, which meant that [he] was totally dependent upon getting the batter to swing.” So he instructed his hitters not to swing at the knuckler until there were two strikes, forcing Bearden to elevate it or throw his unremarkable fastball or curve. The scouting report spread around the rest of the league, Bearden became more hittable, and his walk rate rose. Working primarily out of the bullpen, he posted a 90 ERA+ from 1949 on and was out of the majors after 1953.

It’s an interesting story, and the stats mostly support it. Bearden was probably due for some regression, Stengel’s advance scouting aside—his BABIP in 1948 was some 40 points below the AL average (low even for a knuckleballer), he walked more batters than he struck out, and he allowed only nine home runs in 229 1/3 innings. But in 1949, his walk rate rose by more than two batters per nine, and he allowed 11 runs in nine IP against the Yankees, posting a lower strikeout-to-walk ratio (0.17) against them than he did against any other team. (Admittedly, Bearden struggled against the Yankees in 1948, too. The Yankees were good.)

Since I read that Stengel story, and especially since Daniel Rathman mentioned to me that Joel Hanrahan got only 11 called strikes in 254 sliders last season, I’ve been wondering about the modern-day equivalents of Bearden’s knuckler: pitches that often end up outside of the strike zone and would usually be balls if batters could learn to lay off. Of course, laying off isn’t always as easy as it was against Bearden. Bearden’s knuckler was his primary pitch, and his subpar supplementary stuff made it difficult to disguise. The pitches most often thrown outside of the strike zone today are designed to get chases and grounders and be difficult not to swing at. For the most part, they’ve succeeded at what they were designed to do, which is why the pitchers who throw them are mostly A) still throwing them and B) still in the majors. The point of this article isn’t to say, “Hitters should just stop swinging at [Pitcher’s] [Pitch Type]!”, as if that were a simple thing to do. It’s to say “If hitters were somehow able to stop swinging at [Pitcher’s] [Pitch Type], it would very often be a ball.” (At least until [Pitcher] made some sort of adjustment.)

For reference, here’s how often each pitch type is thrown outside of the typically called strike zone (using Harry Pavlidis’ custom pitch types, as seen at Brooks Baseball):

I’ve included pitch type-specific league averages in the tables, and GIFs of each pitch functioning as intended.

In 2009—his first full, healthy, season—Brandon League struck out over a batter per inning. His splitter earned internet fame as the most unhittable pitch in baseball; 35 percent of the times he threw it, he got a swing-and-miss. No other pitch thrown by any other pitcher topped 30 percent. This is what the splitter looked like then:

The following spring, the Mariners—who had traded Brandon Morrow for League after his unhittable-splitter season—altered his delivery, and he adapted to Safeco Field by throwing the splitter less and pitching to contact more. Ever since, his splitter hasn’t had the same bat-missing ability: 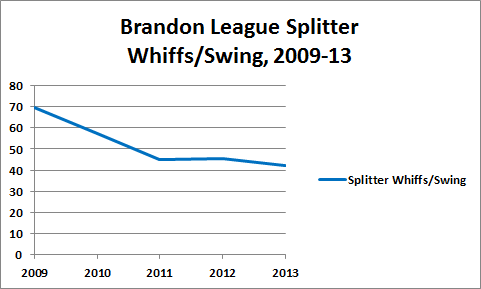 Although he throws it as hard now as he did then, League’s splitter has yielded fly balls almost twice as often this season as it did in 2009. Without as many whiffs, it’s not much of a weapon. In related news, League has struck out 4.4 batters per nine innings and nearly lost his hold on the Dodgers’ close role, despite his big contract. I wrote in the intro that most of the pitches on this list remain effective, but League’s splitter looks like an exception.

The second-highest whiff rate (Tim Collins) and the third-highest groundball rate (A.J Burnett, Zack Greinke) of any changeup in baseball. Strasburg’s change normally runs about eight miles per hour behind his heater, which means it’s averaged almost 89 this season. Yeah, this one will work. After the April start that produced the ugly Votto swing above, Kurt Suzuki called the changeup “dirty,” saying:

That pitch to Votto was the fourth changeup he’d seen in the at-bat, and the second in a row. And still he looked like that.

Zambrano’s splitter, like League’s, has shown a steep decline in whiff rate since 2010, his last successful season. However, unlike League’s, it’s still getting grounders. The Phillies recently signed Zambrano to a minor-league contract, so we might soon see the splitter again.

At this point, Papelbon uses his splitter almost exclusively to lefties, most often with two strikes. It’s gotten a below-average whiff rate this season—a lot below average for Papelbon—but that’s in a small sample, and it’s still getting grounders.

Robertson is a two-pitch pitcher who throws the same pitches at the same rates to both lefties and righties and owns a sizable career reverse split. Only David Hernandez and Craig Kimbrel have higher curveball whiff rates. Even though he throws his curve outside of the zone far more often than average, its ball rate is barely above average. That’s a testament to his ability to miss bats, his extra-long stride and deception, and the catchers who’ve caught him over the past season-plus.

No pitch had a higher whiffs/swing rate than Venters’ slider in 2012. The best stat: batters swung at the pitch at roughly an average rate, even though Venters threw it out of the strike zone almost 40 percent more often than the average slider. It’s a shame that we won’t see it for some time, even if it survives a second Tommy John surgery intact.

Swings against Greinke’s slider come up empty more often than swings against any other starter’s save Patrick Corbin. He doesn’t throw it often, because he has five other pitches. But when he does it gets whiffs, because batters are often expecting one of those five other pitches instead. In order to have success when throwing a pitch outside of the strike zone, you have to have set it up with something else or be setting up something else. Greinke can do both.

Westbrook switched from throwing a changeup to throwing a splitter last season, according to Brooks Baseball's classifications, perhaps because the change wasn't missing as many bats as it had in the past. He's a groundball guy, and while the sinker is his bread and butter, he gets grounders at an even higher rate with his splitter. However, that’s easily the lowest called strike percentage of any pitch. Westbrook has walked 18 batters in 39 innings this season, but double plays help limit the damage.

Nearly 60 percent of Lynn’s changeups are called balls, the highest rate of any pitch. And unlike many of the pitches on this list, his changeup doesn’t induce chases: only Jonathan Niese and Zach McCallister gets swings as rarely on their changeups, and both of them get more called strikes. Lynn throws his changeup rarely, which might be for the best.

You need to be logged in to comment. Login or Subscribe
swarmee
Is that GB/BIP also a percentage? Doesn't seem like a ratio. Or am I reading it wrong?
Reply to swarmee
bornyank1
Also a percentage, yes.
Reply to bornyank1
Tythelip
No Darvish slider?
Reply to Tythelip
bornyank1
Nope.
Reply to bornyank1
SixToolPlayer
Interesting that after all the "wipeout" pitches on the list -- Greinke slider, League splitter, Strasburg changeup, etc. -- the top of the list is a comparatively weaker offering.
Reply to SixToolPlayer
akamikedavid
Romo's slider and/or Lincecum's change-up?
Reply to akamikedavid
Tarakas
Very nice article.
Reply to Tarakas
fredlummis
I'm surprised Marmol didn't make the list. It seemed like he hardly ever threw it in the zone during the past few years. I thought the straight take until two stikes strategy would work well against him.
Reply to fredlummis