Today was a day that many teams played their sixth game of the season, meaning that opening day starters would be making their second starts of the season. That meant the likes of Justin Verlander, Jon Lester, Stephen Strasburg, Johnny Cueto, Cole Hamels, James Shields, Jeff Samardzija, and both defending Cy Young winners would be on the mound. At the end of the day, most of that group had starts they would rather forget as most of the pitchers had starts they would rather forget none more than David Price.

Price's outing was the worst of his career in terms of Game Score as he posted a score of 15. He surrendered 10 hits, most of which were well-struck balls, walked three, and gave up eight runs. One home run came on a two-strike curveball to Mark Reynolds that found too much of the strike zone while the other came from Lonnie Chisenhall. Chisenhall became just the seventh left-handed hitter to homer against Price joining Chase Utley, Jacoby Ellsbury, Hideki Matsui, current teammate Kelly Johnson, Robinson Cano, and Curtis Granderson who has done it four times. Price threw 96 pitches in this game, 61 of which were strikes. Finding the strike zone was not an issue for Price as much as location was for him. Price elevated several pitches and the Indians made him and his cohorts pay for it as they banged out 17 hits, 11 of which went for extra bases. 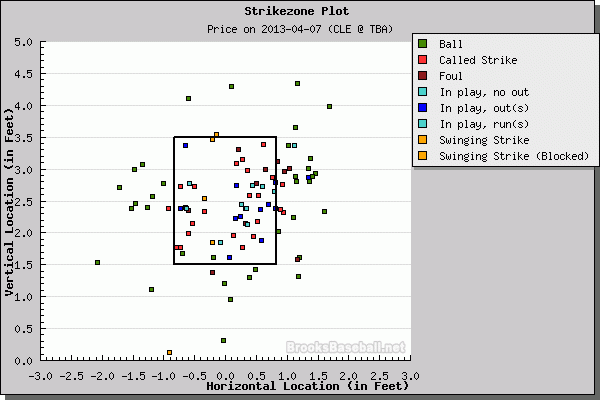 Coming into the game, Cleveland had demonstrated the most patience in the American League swinging just 40 percent of the time and chasing pitches out of the zone just 25 percent of the time. In all, Price generated just five swings and misses in this game out of 96 pitches coming off his first start in which he had just seven whiffs on 100 pitches. Price threw 35 secondary pitches in this contest and Cleveland hitters swung and missed at three breaking balls but did not miss any of the 17 changeups.  I asked Joe Maddon about this after the game, but Maddon is not concerned:

Price had a few comments after the game. "I'm fighting myself right now. It's tough for as good as I feel out there on the mound to go out there and be my worst enemy." Price feels his velocity is fine, and the game data from BrooksBaseball backs this up. His next start comes in six days against the Boston Red Sox, a team he had a fair amount of success against in 2012. He had no success against them in his second start of 2012 as he lasted only three innings and needed 83 pitches to do so but went deep into each of his final four outings against them.

You need to be logged in to comment. Login or Subscribe
harderj
Was there something in the water? This is the combined line today for David Price, Justin Verlander, R.A. Dickey, Stephen Strasburg, Matt Cain, James Shields, Cole Hamels, and Fernando Rodney:

Now if Jered Weaver and/or Yu Darvish have bad outings we'll know there's something up...
Reply to harderj
moonlightj
It was truly a zany day of baseball
Reply to moonlightj