The knuckleball is a difficult pitch to hit because of its unpredictable movement. But few analyses have ever looked at another component of the knuckleball: its speed.

According to the man himself, R.A. Dickey varies the speed on his knuckleball according to the situation. But how much, and in what way? Is this a common feature of knuckleballers, or relatively unique to Dickey?

In the PITCHf/x era, we really have only two knuckleballers with sufficient data to analyze, R.A. Dickey and Tim Wakefield (there are others, such as Charlies Haeger and Zink, but those pitchers have appeared only a very small number of times).

To answer this question, I pooled knuckleballs by count (1-2, 3-0, etc.) and looked at the standard deviation of the pitch mph within those counts. To visualize this data, I have plotted count, not as two separate categorical variables, but as count linear weights—the run value of being in a particular count (such as 0-2). This makes “count” one continuous axis along which to visualize data.

R.A. Dickey’s data is in the first graph: 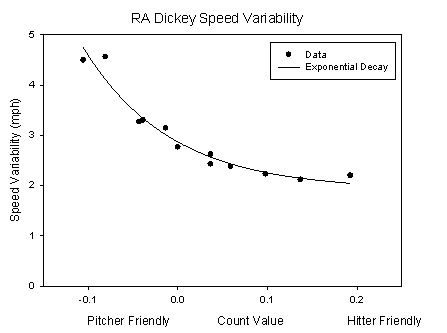 And Tim Wakefield’s data is in the second graph: 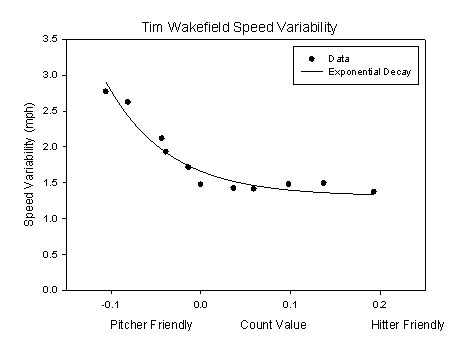 You can see that both pitchers actually varied the speed of their knuckleballs by the count, with more speed variability when the count was more pitcher friendly (such as on 0-2 or 1-2) than when the count was hitter friendly (such as on 3-1 or 3-0). But, you can also see that R.A. Dickey is varying the speed of his knuckleball over a much bigger range, with mph variability of ~4.5, whereas Tim Wakefield’s variability was closer to ~3mph.

Here is Dickey’s data; I removed 3-0 counts because one significant outlier in a small dataset (he rarely throws 3-0 knucklers) was dramatically changing an otherwise evident pattern: 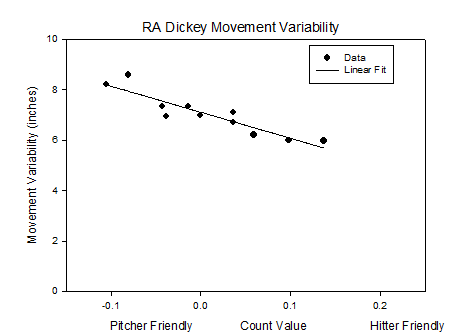 It’s clear that when the count is pitcher friendly, Dickey’s knuckler has some extra butterfly action. How about Wakefield’s? 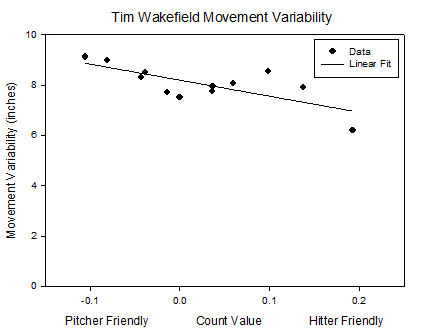 Wakefield’s function is actually noisier than Dickey’s, and the trend is less clear. Still, there’s evidence that Wakefield too got more knuckleball movement when he could chance it.

What have we learned? Well, knuckleballs are not totally out of the pitcher’s control. When pitchers are ahead in counts, the knuckleball has both greater movement variability and greater speed variability— and more variability means it’s harder to hit.

Thanks to Harry Pavlidis and Pitch Info LLC for use of their pitch identifications.

You need to be logged in to comment. Login or Subscribe
gweedoh565
Very cool analysis, Dan- I'd be interested in seeing the mean and range in pitch speeds by count as well...
Reply to gweedoh565
Schere
question - maybe the good counts themselves are positively correlated with the higher variability of speed and movement. i.e., when he's got a good knuckler going, he's more likely to get into good counts.

Does that make sense? Can you test or control for that?
Reply to Schere
Behemoth
Would be interesting to see how this matched up with results, if sample sizes are big enough.

Also, very good article.
Reply to Behemoth
Oleoay
How do Dickey and Wakefield's knucklers compare, velocity and movement-wise to their nonknuckler pitches?
Reply to Oleoay