The Monday Takeaway
Remember the Justin Upton who cranked five homers in his first five games of the 2013 season, then tacked on a sixth in game seven, ran his tally up to nine in game 13, and was on top of the league with a dozen through game 23? He was gone for a while, and he rarely called home. But if the past handful of days is any indication, he has returned.

The Braves warmed back up before Upton’s bat did, winning their last five games in July, including a two-game sweep of the Cardinals and victories in the first three contests of a four-tilt set with the Rockies. Upton chipped in a couple of doubles on July 30 and three singles on July 31, foreshadowing the fireworks to come after a false alarm earlier in the month.

As soon as the calendar flipped to August, the power switch for Upton’s bat flipped back to “on.” He clubbed two homers in an 11-2 rout that completed the four-game sweep of the Rockies on August 1. Then, after letting his teammates do the heavy lifting in the series opener against the Phillies, he homered and drew two walks in the middle match and sent Charlie Manuel’s squad off with two knocks and a walk in the finale.

Another series, another sweep. A 10-game winning streak, and a 12 ½-game division lead.

On Monday, as the Braves kicked off a quick three-game trip to the nation’s capital, Upton packed his punch for the flight north. Mike Minor allowed more hits and walks than Stephen Strasburg and struck out only three batters to Strasburg’s nine, but the Nationals’ persistent struggle to drive in runners in scoring position helped him to match Strasburg in the most important column in the box score: runs. They were both charged with two.

Leading off the top of the eighth inning for the visitors, Upton worked a full count against Tyler Clippard and then was gifted the sort of breaking-ball mistake that, throughout his power outage, he failed to punish. A week ago, Clippard might have escaped unscathed. Not anymore.

Upton yanked the hanging hook inside the left-field foul pole for a go-ahead solo shot that David Carpenter, Luis Avilan, and Jordan Walden ensured would be the difference in the 3-2 Braves win. It was the fourth homer in five days for Upton, who, as you might recall, hit his previous four between May 13 and July 31, an 80-day span.

The Nationals and Phillies, eight games back at the end of play on July 25, kept giving the Braves opportunities to put them away. But, in part due to Upton’s power outage, Fredi Gonzalez’s club was unable to do it. Now, as the Braves, winners of 11 in a row, enjoy their longest streak since 2000, the second-place Nationals are buried 13 ½ games below them, and the third-place Phillies are even deeper, having ceded nine games’ worth of ground in just 11 days.

With virtually no lingering doubt that Atlanta will win its first National League East title since 2005, the Braves can set their sights on earning home-field advantage for their pennant push. The advantage could prove significant—the Braves are 38-15 at Turner Field and 30-30 on the road. And with 28 home games in the 49-game batch left to be played, all the Braves need to do to garner it is to keep doing what they’ve been doing and hope that Upton’s resurgent pop is here to stay.

Monday’s Matchup in Review
Raul Ibanez went 1-for-4 on the evening and 1-for-3 against Dickey, but only two of his at-bats against the knuckleballer actually ended on a knuckler. The quadragenarian left fielder, who batted fifth in acting manager Robby Thompson’s batting order, grounded out to short on a knuckleball to end the first inning and lined one into center field for a single with one away in the fourth. He rolled over a first-pitch fastball in the sixth inning, costing himself another crack at the pitch he handles best.

Tack a 1-for-2 showing onto the data in the above table, and Ibanez’s line against the knuckler over the past six years improves to 14-for-33. That’s a .424 average, his best against any pitch, small-sample-size caveats be damned.

Ibanez is now 12-for-33 lifetime versus Dickey, who tossed 7 2/3 innings of one-run ball and limited the Mariners to only a solo homer by Justin Smoak. Dickey walked two and struck out five while paring his road ERA for the season down to 3.08.

Matchup of the Day
Andrelton Simmons has been a wizard at shortstop in his first full major-league season, but you might forgive Gio Gonzalez for thinking that he’s also a wizard at the plate. In 15 plate appearances versus the Nationals’ lefty, Simmons has collected five hits—including a double and two homers—and drawn three walks without striking out. His .417/.533/1.000 triple-slash line adds up to a 1.533 OPS, the best mark assembled by any hitter who has faced Gonzalez at least 15 times in his career. 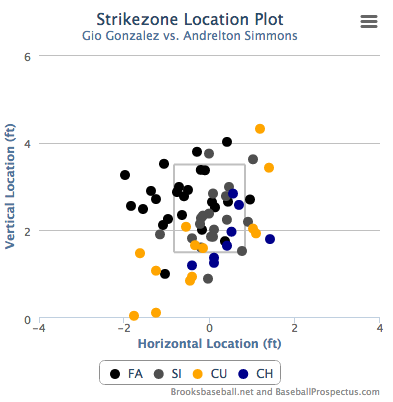 In this limited sample, Simmons has taken advantage of a handful of location mistakes made by Gonzalez, such as this center-cut fastball, which yielded a home run on April 14. One of the two walks that Simmons worked was the result of a 14-pitch marathon on July 1, 2012, in which the shortstop fouled off just about everything Gonzalez threw at him before taking ball four inside.

As frustrating as their past meetings might have been for Gonzalez, though, there is ample reason to believe that he can turn the numbers around. If the southpaw brings better fastball command to the mound tonight, he should be able to expose, or at least test, a couple of apparent holes in Simmons’ swing. 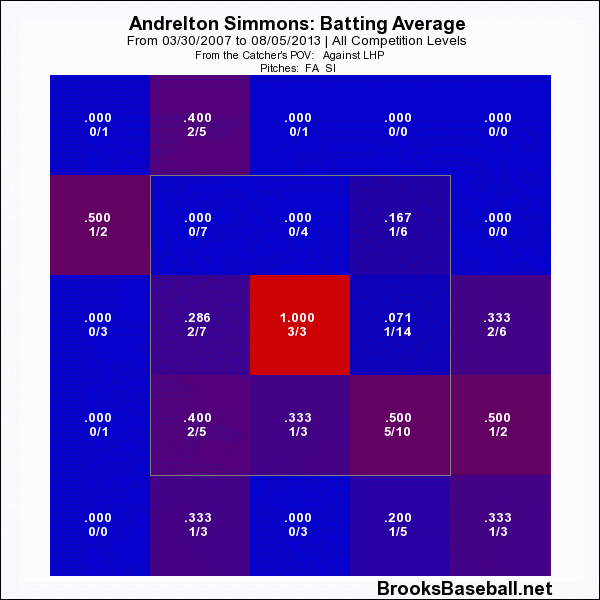 Simmons prefers low pitches to high ones and struggles with hard stuff above the thighs on the outer third. He has shown a tendency to pop up high-and-away fastballs, and he has not squared them up very often. Theoretically, that should work in Gonzalez’s favor, because he likes to pitch right-handers with fastballs and sinkers away, particularly early in the count. However, better command than he displayed in April is critical, because failing to spot the ball on the outside edge—as Gonzalez did on April 14, when his heater caught too much of the plate and wound up over the left-field wall—can spell big trouble.

Gonzalez’s most recent outing was his worst of the season, as the Tigers shelled him for a season-high 10 runs on 11 hits, including two homers, in a season-low 3 1/3 innings. His ERA shot up from 2.97 to 3.57, and it was the first time since that April 14 dud against the Braves that Gonzalez had served up two long balls in the same start.

The 27-year-old simply had no command that day:

His curveball was all over the place. His changeup too often hung belt-high. He was unable to spot the fastball near either corner. And the Tigers, even with Miguel Cabrera nursing a hip ailment, made him pay.

The Braves have no shortage of power bats similarly capable of doing big damage. If Gonzalez’s command remains astray, Simmons and company could send him off before the end of the sixth for the third consecutive start (7:05 p.m. ET).

You need to be logged in to comment. Login or Subscribe
Grasul
Minor thing, but Kimbrel didn't pitch for the Braves last night; Walden finished the game.
Reply to Grasul
bornyank1
Fixed.
Reply to bornyank1
Michael
Tim Wakefield's MLB K/BB ratio was 1.8 and in the minors it was only 1.5.

Chances are that Steven Wright isn't ready to dominate major leaguers yet, but I wouldn't put too much negative emphasis on his AAA K/BB ratio because the standard for a successful knuckleballer (who should be able to post BABIP and HR/IP below league averages) may be a worse K/BB ratio than we hope to see from a more conventional pitcher.
Reply to Michael
statsrath
That is a good point. Looking forward to seeing how Wright's success in the minors translates to the majors.
Reply to statsrath
danugglasforearm
Justin Upton's homer on Monday only went 382 feet. Surely he's hurt?
Reply to danugglasforearm