Earlier this week, Angels starter C.J. Wilson threw a knuckleball—or so he said. Whether what left his hand was the genuine article is a matter of some uncertainty, which we’ll attempt to resolve before this article is over. Regardless of whether Wilson deserves induction into the knuckleball club, though, his claim made me wonder what other knuckleball news I might have missed. If a 33-year-old can break one out without warning in his 10th big-league season, who’s to say another knuckler hasn’t made an uncredited appearance at some point in the past several seasons? Knuckleballers, like ring-bearers, are entitled to retire to Valinor, so it’s important that we don’t leave anyone out.

Fortunately, pitch-tracking technology has made knuckleballs much easier to monitor. Over the seven-plus seasons for which PITCHf/x has been active, Pitch Info (aka Harry Pavlidis) has tagged 23, 922 pitches as knuckleballs, thereby establishing them as superior to every other offering. For those precious pitches, we have 11 men to thank, classified below by their relationship to and reliance on the pitch.

As a baseline by which we can measure the knucklers to come, here are the pitch plots for each, with the knuckeballs represented by mustard-colored blobs: 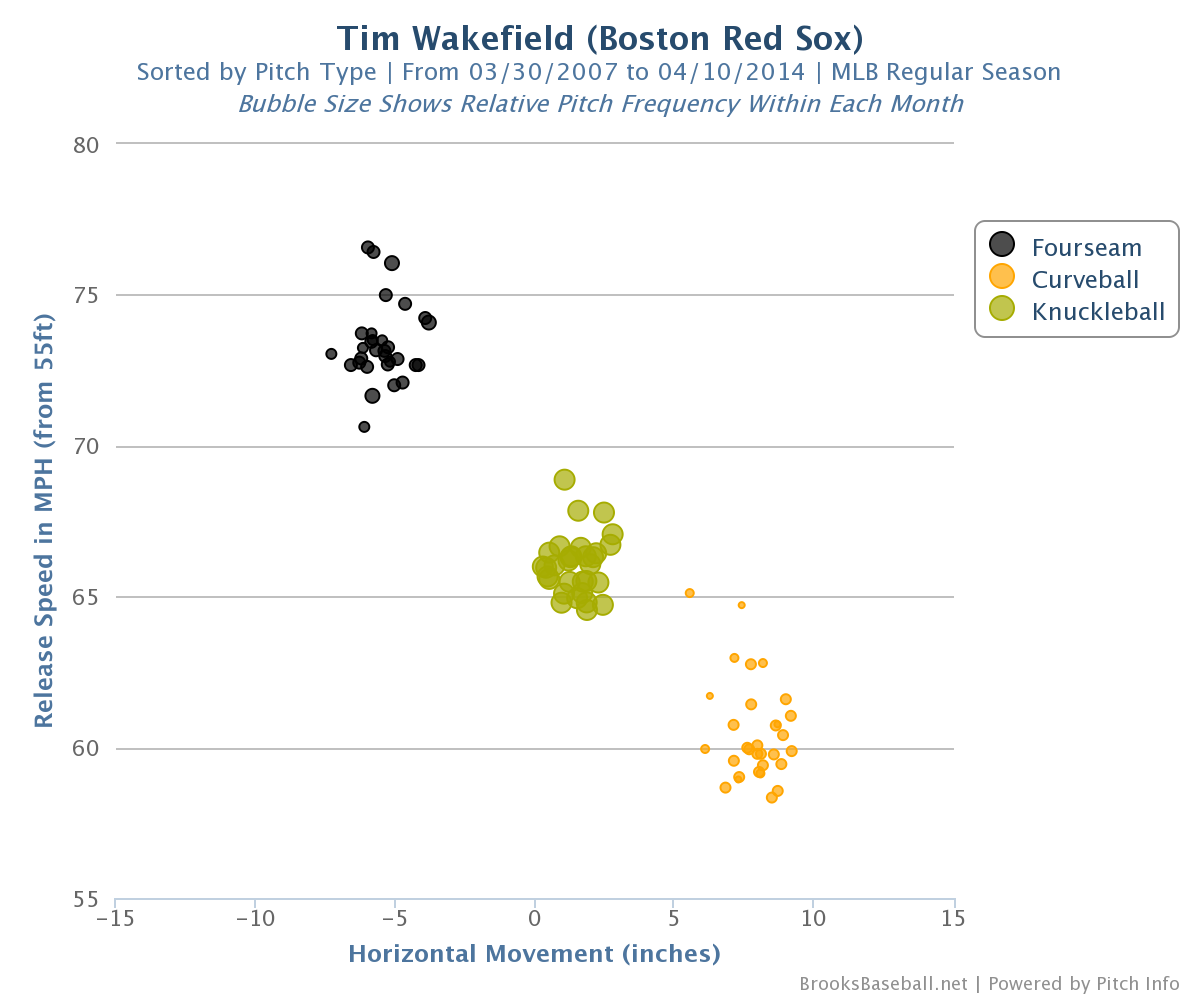 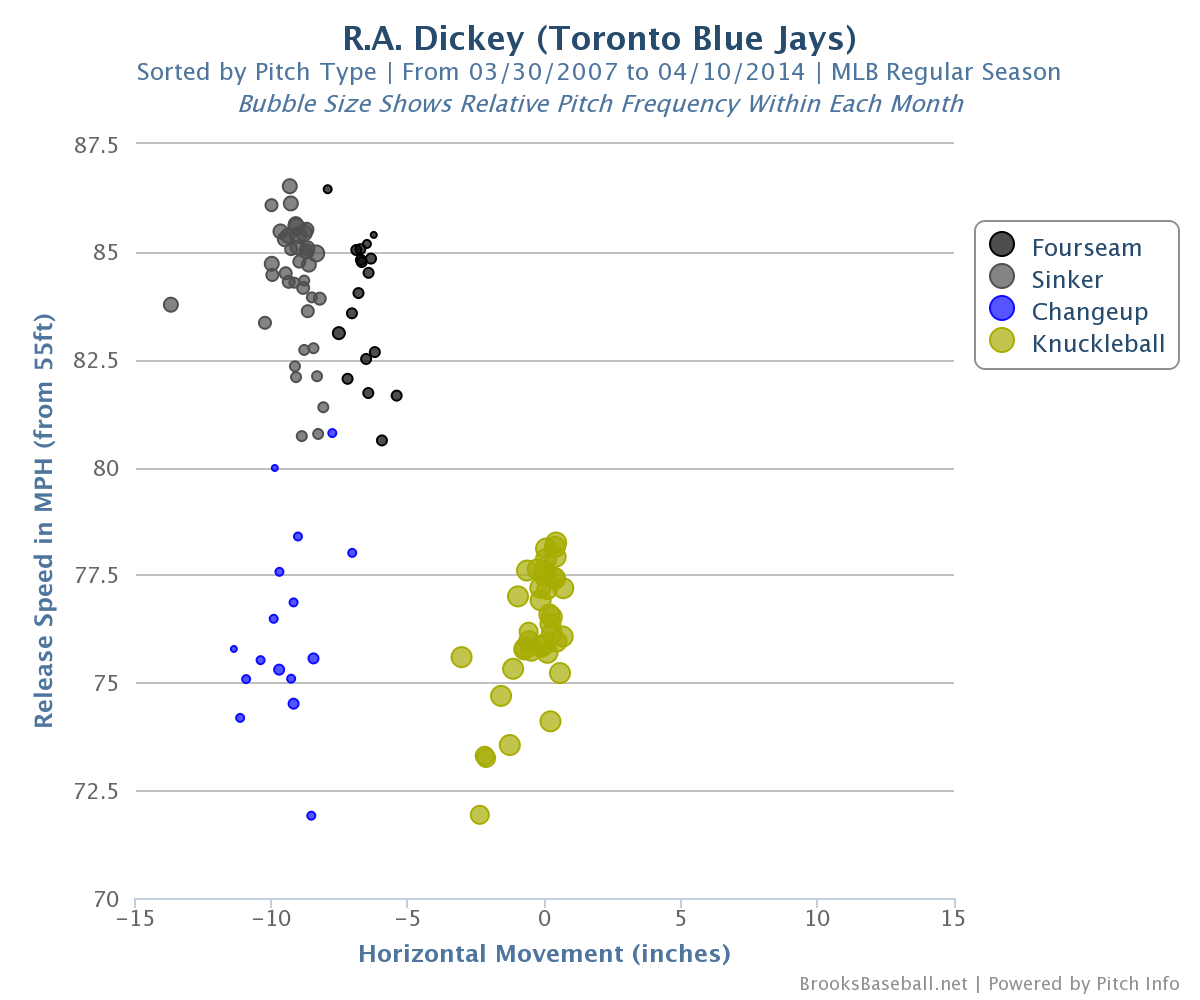 Wakefield’s was the more conventional version of an unconventional pitch, averaging 66 mph toward the end of his career. Dickey throws both a “slow” knuckler and a “fast” knuckler, though even the slow one is harder than what Wakefield offered after age 40. Late-career Wakefield threw his knuckler 84 percent of the time, while Dickey checks in at 82 percent. Both pitchers’ knuckleballs have an average horizontal (and vertical) movement near zero, since the knuckleball's movement is random in direction.

Next on the knuckleball leaderboard is Charlie Haeger, who threw 83 innings across 34 games and 10 starts for the White Sox, Padres, and Dodgers from 2006–2010. Haeger threw his knuckleball about as often as Dickey did, and at about the same speed as Dickey’s “slow” type.

Here’s Haeger on his best day in the big leagues, a six-inning, 12-strikeout performance against the Marlins in his first start of 2010:

In his eight subsequent outings for Los Angeles that season, Haeger had a combined 9.38 ERA, which got him demoted to the minors for good. He spent 2011 and 2013 pitching at Double- and Triple-A in the Seattle and Boston systems, missing 2012 after undergoing Tommy John surgery (which just goes to show that no UCL is safe). He’s currently looking for work, and if you have half a heart and a whole baseball team, you’ll consider signing him. He’s only 30 years old, which is nothing in knuckleball years. Dickey spent most of his age-30 season in Triple-A, too.

Steven Wright, whom Jonathan Zeller profiled last year in a guest piece for BP, got a few quick call-ups with the Red Sox last season, walking nine and striking out 10 in four games and 13 1/3 innings pitched. For that, he got this:

So excited and blessed to be able to have a World Series ring. Absolutely amazing. Thank you @RedSox pic.twitter.com/bXwZoSbCVs

Wright’s 203 major-league knucklers averaged -0.27 inches of horizontal movement and 0.11 inches of vertical movement, about as close to zero as it’s possible for a pitch to be. 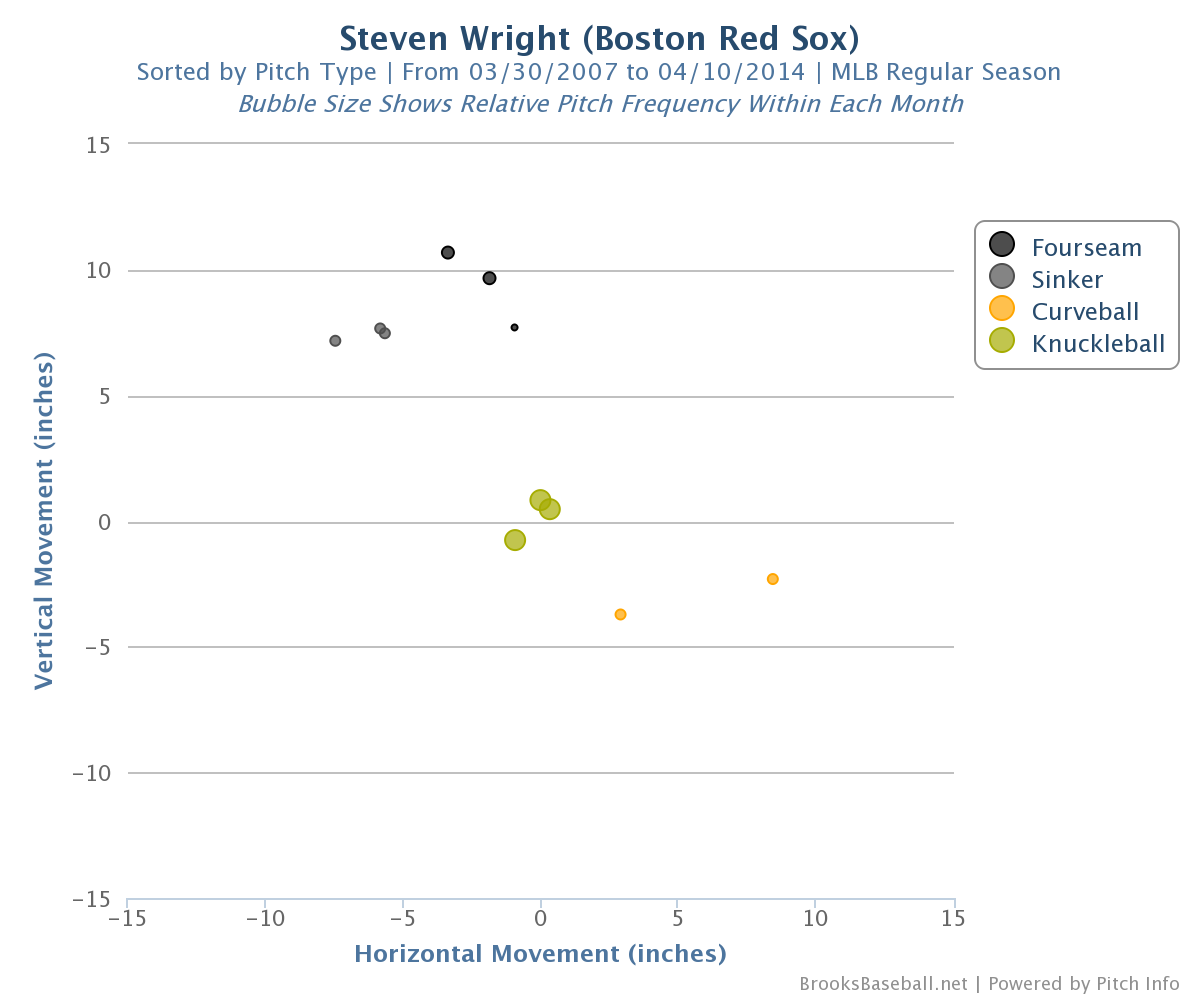 He throws his knuckler almost as hard as Dickey can, though his opponents tend to make contact.

Wright, who’s a year younger than Haeger and pitched pretty well for Pawtucket in 2013, is the best bet to join Dickey in the big leagues this season. However, he suffered a sports hernia over the winter, and he’s still rehabbing from the surgery.

The last of the five full-time knuckleball practitioners is Charlie Zink, who threw the pitch 58 times at Wakefield-esque speeds in his lone major-league outing, which came with the Red Sox (who else?) in 2008. That outing didn’t go well, as Jonathan detailed in the afore-linked article on Wright, and Zink didn’t get another. He hasn’t pitched professionally since 2011 or in an affiliated league since 2010.

The Part-Timers
There are two pitchers from the PITCHf/x era who threw the knuckleball too often to be described as dabblers, but not often enough to qualify as full-fledged fraternity members. The first, Josh Banks, broke in with the Blue Jays in 2007 and threw 119 1/3 innings over four seasons in Toronto, San Diego, and Houston. He walked 42, fanned 55, and posted a 5.66 ERA, and he hasn’t pitched since recording a 7.27 ERA in 78 innings for Fresno in 2011.

Banks threw six pitches despite working in relief, and he used his knuckleball only 16 percent of the time, delivering it at an average speed of 75.5 mph. Judging by his pitch plot, he didn’t quite have the “spinless” aspect of the pitch down: 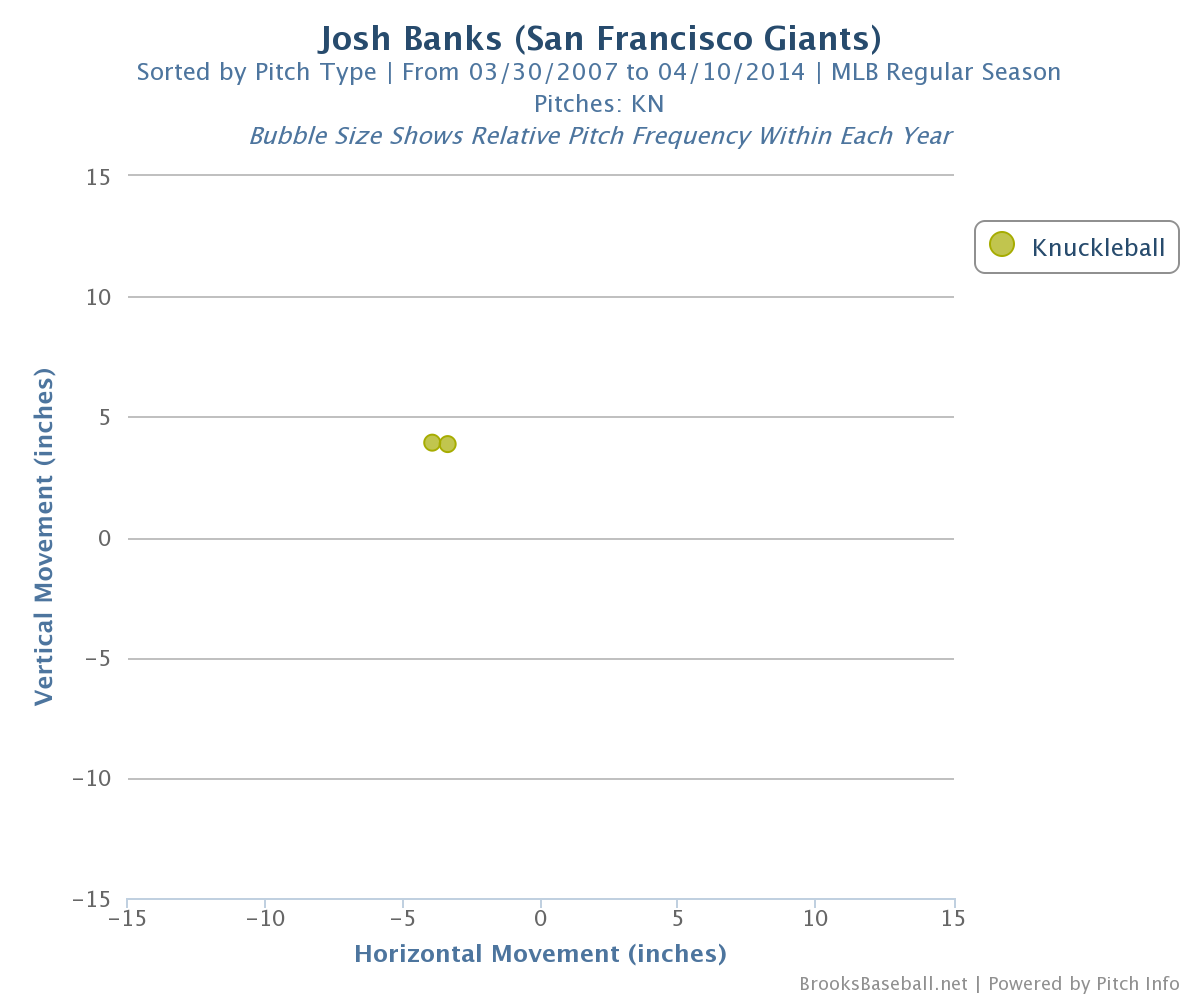 However, batters had a hard time hitting Banks’ knuckler, batting just .217 against it with a .383 SLG. Everything else he threw got crushed, which will happen to a right-hander whose fastball comes in at 87, so it’s surprising that he didn’t try to go to it more. Instead, he used it less as time went on. Banks is still only 31, but unlike Tomo Ohka, he didn’t take Toronto up on their offer to come to camp this spring to serve as a stand-in for Dickey during knuckleball catching practice, so we can probably close the book on his career.

Bonine, like Banks, was “not so much a knuckleball artist as a knuckleball tourist,” as we wrote in Baseball Prospectus 2011. Bonine’s knuckler was hard, averaging 80.4 mph, but he threw it only 11.5 percent of the time, using it sparingly in all counts.

Also like Banks, Bonine didn’t miss bats and didn’t last long in the majors, pitching parts of the 2008–10 seasons with the Tigers and striking out 54 batters in 129 innings. As recently as last season, the 6’5” righty was still at it, though his 32 walks and 26 strikeouts in 99 2/3 innings across three levels and two organizations didn’t give teams much of a reason to bring him back for 2014.

The Experimenters
Now we come to the guys below the Banks-and-Bonine level: three pitchers who’ve fooled around with knuckleballs in games but haven’t relied on the pitch regularly.

The Mariners wouldn’t let reliever Ryan Franklin throw his knuckler in games early in his career, but eventually they relented, and he threw the pitch (which he’d had since playing in Pee Wee) three times in five seasons with Seattle (his own estimate). By the time he got to St. Louis—and by the time PITCHf/x was installed in all parks—he’d begun to take it out of its protective casing more often, throwing it 11 times in 2008, four times in 2010, and 14 times in 2011. Franklin’s knuckler was as hard as Bonine’s, averaging 80 mph, and he never allowed a hit on the pitch.

Manny Parra threw seven pitches classified as knucklers from 2008–9, further back than MLB.TV’s archives extend. As far as I can tell, he hasn’t discussed the pitch, but it does appear to be a distinct offering on his pitch plot: 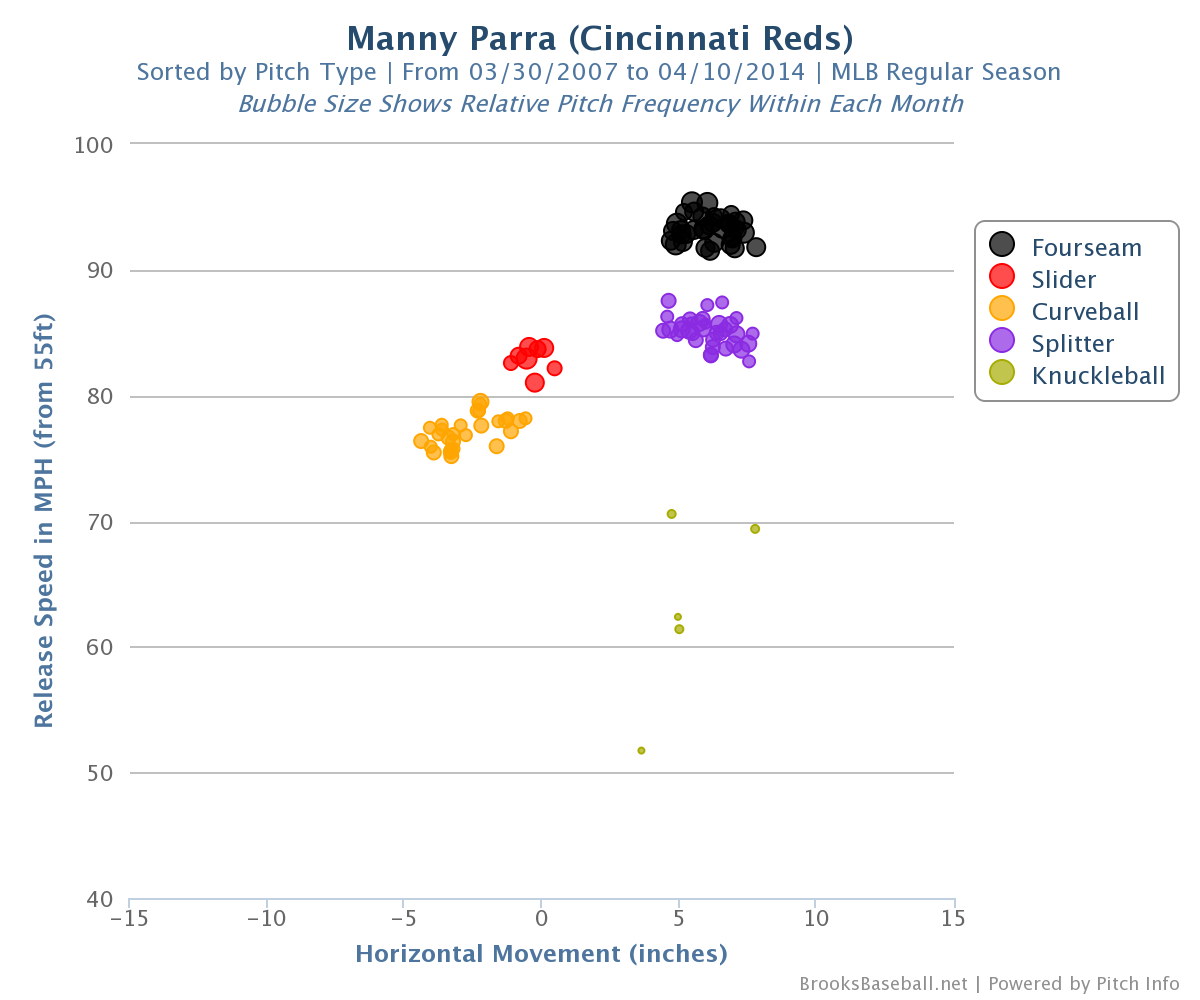 That’s about as close as we come to the dream of an unknown knuckleballer surreptitiously slipping the pitch in front time to time. Which brings us back to Wilson. After his outing on Monday, Wilson said, “I even threw a knuckleball today. I was just out there having fun. I didn’t know what to throw to [Jesus] Guzman, because I felt like he hit the ball hard every time off me… in his third at-bat, I literally threw him a knuckleball, because I was like, ‘I literally have no idea what to throw him here.’”

The pitch traveled almost 81 mph, with close to six inches of horizontal movement and almost four in the vertical direction, and it looked awfully light on flutter. According to Harry, it would’ve been tagged as an “odd/bad changeup” if Wilson hadn’t interceded on its behalf. On Wilson’s pitch plot, it comes in just below the changeup blob with the lowest velocity: 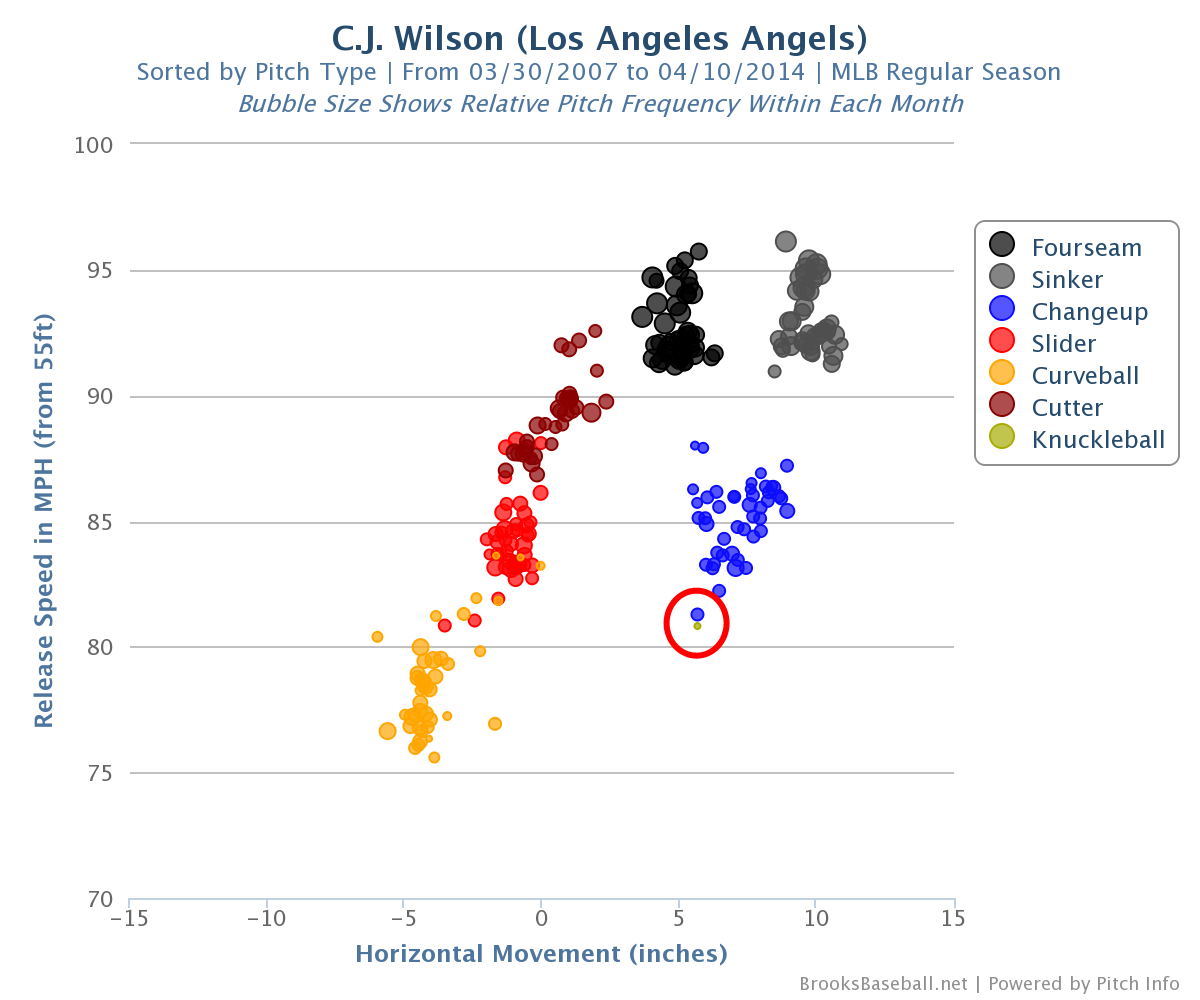 So was Wilson’s experiment a knuckler? It didn’t look like one, and the data doesn’t suggest that it behaved like one, but Wilson believed it was one. This is more of a philosophical question than one we can answer with numbers. If we’re factoring in the pitcher’s intent, then Wilson belongs in the group. Maybe he’ll have a better knuckler next time.

Brian Wilson throws a good-looking knuckler, we now know, but he hasn’t done it while PITCHf/x was watching.

The Position Player
Like Jose Canseco before him, David Murphy flashed four Wakefield-speed knucklers last June in his lone outing on the mound, striking out Mike Carp with one of them.

Before we close out this category, we can debunk a knuckleball myth. On July 28, 2010, Brewers utility guy Joe Inglett pitched a scoreless inning, throwing six pitches at an average of 54.4 mph. MLBAM’s automatic classification algorithm (less sophisticated then than it is now) classified the pitch as a knuckleball, which led to a few posts about Inglett’s special offering. That wasn’t what it was, though:

While the pitches registered as knuckleballs on the pitch tracker, catcher Jonathan Lucroy said Inglett was just throwing the ball to the glove.

"I put down fastball, but it wasn't fast," Lucroy said. "It's just flipping them in there. That's all it is. Just trying to save our pitching staff for tomorrow."

Sorry, Joe Inglett. You don’t get to go to Valinor.

The 12th Apostle?
There might be another knuckleballer. Four pitches thrown by Livan Hernandez have, in Harry’s words, “atypical velo/movement” that makes them look like knuckleballs: one from 2007, two from 2009, and one on May 8, 2011 (a 2-1 pitch to Gaby Sanchez in the fifth). Theoretically, we should be able to view the pitch from 2011, but the links to those archived games are broken. If/when they’re fixed, I’ll go get a GIF, which might tell us whether Livan belongs.

You need to be logged in to comment. Login or Subscribe
bhalpern
Great stuff Ben. Thanks.
Reply to bhalpern
therealn0d
While I certainly don't qualify for membership, I did regularly throw a knuckleball as an out pitch and change of pace offering in my limited amateur days. It's a fun pitch, although who it is fun for is difficult to pinpoint. Getting called strikes with it was not easy. There is an excellent documentary currently on Netflix called Knuckleball that I recommend to all.

Reply to therealn0d
bornyank1
Watched that recently.
Reply to bornyank1
SixToolPlayer
I was asked to provide some PITCHf/x analysis for that documentary, except I didn't see the message (it was buried in a Facebook folder I didn't know existed) until 18 months later. Oops.
Reply to SixToolPlayer
a-nathan
Excellent article. However, I should correct something you wrote: "Both pitchersâ€™ knuckleballs have an average horizontal (and vertical) movement near zero, which makes sense. PITCHf/x measures movement relative to a â€œspinlessâ€ pitch, and the true knuckleball is thrown virtually without spin.". That statement is not correct. The reason for the movement averaging to zero (in both horizontal and vertical directions) is because the movement is random in direction. It is not because the movement is inherently small. PITCHf/x does not measure spin; it measures movement. For "normal" pitches, the spin is inferred from the movement. That doesn't work for knuckleballs, for which the movement has nothing to do with spin.
Reply to a-nathan
bornyank1
Thanks, Alan, I made that change.
Reply to bornyank1