We have witnessed a parade of aces thus far in the playoffs, but each team's rotation depth gets tested the deeper that we get into the postseason, and today we get treated with a matchup of back-of-rotation starters who have very different profiles. One of today's starters is a six-foot-ten Sasquatch who is making his first start of the postseason, while the other is a 40-year old knuckleballer whose exchange to a club north of the border may have been the difference that netted the Mets – who acquired Noah Syndergaard and Travis d'Arnaud in the swap – an NL East crown this season. The two soft-tossers offer a change of pace from their hard-throwing rotation mates, and one gets the feeling that there are going to be a lot of pulled baseballs in this one – we may not see a pitch over 90 mph for the first five innings.

Young started the season pitching in the KC bullpen, where he stayed for the first month of the campaign, and he coasted through the transition into the rotation with an ERA 0.78 for his first 34.7 innings of the year (which included four starts). He had a bumpier ride through June, including a pair of starts in which his runs surrendered outnumbered his innings pitched, though he also mixed in a trio of strong turns that kept his overall numbers in check. The regression police arrived to add a dose of reality to Young's stat-line in July, and the Royals made some moves at the deadline that effectively bumped him back to the 'pen, but now the tall right-hander finds himself thrust back into the starting role in game four of the American League Championship Series.

Stamina is not his strong suit, having cleared more than 18 outs in just two of his outings this year, and strikeouts would also not be listed among the strengths on Young's resume, with just two games that featured more than five strikeouts in the regular season. He did pull the latter trick in his one playoff appearance, however, striking out seven Astros over four relief frames in game one of the ALDS. He even struck out the side in a perfect fourth inning, inducing swinging K's from Chris Carter, Jason Castro, and Jake Marisnick in order.

Dickey was an unmitigated disaster for the first few months of the season, carrying a 4.87 ERA into the All-Star break with 17 homers allowed in 114 2/3 innings pitched. He also posted a 3-10 record in the first half of the campaign, and though won-loss record is just about the worst way to evaluate a pitcher's performance, his 8-1 tally over the second half of the season was nearly as indicative of his level of improvement as the post-break ERA of 2.80. Part of the difference may have been a change in his usage pattern, as the Blue Jays started limiting his workload on a game-to-game basis such that the pitcher who threw 96 or more pitches in 21 of his first 23 starts of the campaign cleared that same threshold just once in his final ten turns of the regular season.

Dickey's K rate – which had peaked at 24.3 percent in his Cy-winning year of 2012 – tumbled from the over-18-percent mark of the previous two seasons all the way down to 2015's 14.3 percent, and the bounce back to his walk rate (which was better than the previous two seasons but still worse than his CY year) was modest in comparison. He started game four of the ALDS, holding the Rangers to a lone run but getting bounced from the ballgame before the fifth inning was finished, giving way to David Price with a 7-1 lead in a move that stirred the cauldron of controversy. The pitch count had nothing to do with the timing of Dickey's exit in game four, as he had only thrown 78 pitches in the game, especially considering that workloads are rarely a concern with knuckleballers.

Young is basically a two-pitch guy, alternating his high-80s fastball with a vertically-breaking slider at a 60-40 ratio. The fastball carries some arm-side run, with enough subtle movement to coax weak contact along with a low hit rate this season despite the pedestrian velocity. Not surprisingly, the slider is his weapon of choice when a punchout is in order, becoming his most frequently-used pitch against both righties and lefties when he has two strikes on the batter. The slide accounted for 62 of his 83 strikeouts this season (75 percent), including an empty whiff on more than 35-percent of the sliders that encouraged a swing from opposing batters.

Batters know what they're getting with Dickey, who throws the knuckler on nearly 90-percent of his pitches, but he survives largely due to the utter unpredictability of the flight path for his pet pitch. He sneaks in a four-seam fastball 19-percent of the time that he falls behind a right-handed batter, and he relies on the element of surprise to allow his 82-mph “heat” to sustain effectiveness, though his mere six-mph difference (on average) between fastball and knuckler effectively minimizes his options in exploiting effective velocity. To say that the knuckleball is Dickey's bread and butter might undersell the situation, as his particular brand of knuckler accounted for 118 of his 126 strikeouts (93.7 percent) in the regular season.

The unpredictable flight path of a pitch that floats like a butterfly can also sting like a bee when it flutters off course.

Young features an exaggerated lean to his delivery that begins right from the get-go, drifting to the first-base side before he hits maximum leg lift and continuing to perpetuate the lean through stride and into release point. Such a lack of stability might be expected for a pitcher of such outrageous size, given the added difficulties in coordinating such a large frame, but his solid Y-plane balance (vertical direction) pairs with the seemingly blatant nature of the left-side lean to suggest that his sub-par marks for stability have more to do with technique than a lack of physical coordination. 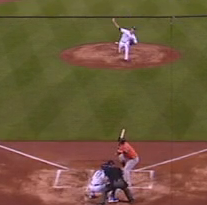 The lean perpetuates into heavy spine tilt by the time that he reaches release point, adding to the height of his arm slot but limiting his ability to reach full extension. His below-average momentum and lackluster stride are co-conspirators in the crime that is Young's underwhelming release distance despite his having such a tremendous natural advantage.

Young's delivery receives poor marks in both the power and stability categories, including the aforementioned issues with balance and momentum, but also extending to his weak torque. There is very little time-delay between the firing of his hips and that of his upper-half, thus minimizing hip-shoulder separation as well as pitch velocity.

I tend to enjoy knuckler mechanics, as they generally overlook the power aspects of delivering a baseball and instead focus on having as little turbulence in their deliveries as possible, in order to retain any hope of commanding the butterfly dance. Dickey is no exception, with plus balance that he maintains throughout a very simple delivery, and though he invokes a bit of spine-tilt near the end of the kinetic chain the net result is league-average posture that spikes higher.

His torque scrapes the bottom of the barrel, with hips and shoulders that are wired together and hence fire together, with no load with the upper-half and a mere shadow of a delayed trigger. His fastball can hit 30-grade on the torque scale, but his mechanics are geared toward the singular goal of finding a repeatable release point in order to optimize pitch command, a goal that has little use for power in its execution.

You need to be logged in to comment. Login or Subscribe
JCelona34
I know it wouldn't be a project for anytime soon due to the post season going on but I would be interested in seeing a comparison of the mechanics of knuckleball pitchers to see if there is any difference
Reply to JCelona34
Taldan9
In a BP article during the season, reference was made to Young's year-to-year BABIPs over his career being unusally low as an explanation for his success, at least in certain parks. The conclusion, I believe, was he would have very limited success in parks like Rogers, and yet...was he just lucky and then Yost smart for pulling Young early?
Reply to Taldan9