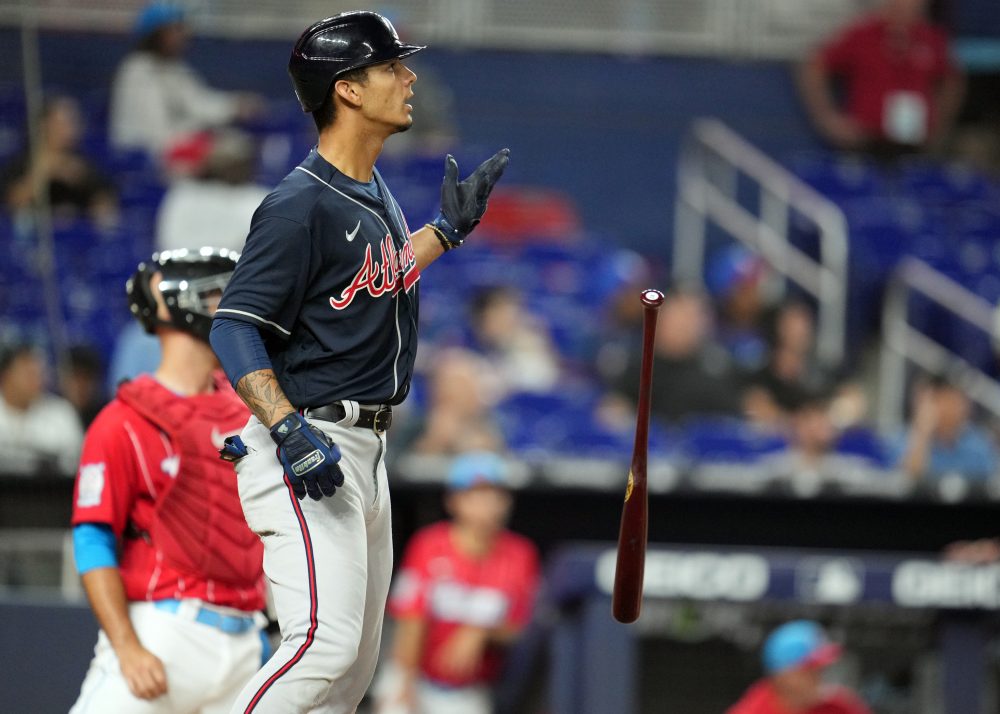 Vaughn Grissom $102 (Maximum Bid: $350, Minimum Bid: $3)
If Ozzie Albies hadn’t landed on the IL in mid-June with a fractured foot, we’d probably just be dreaming on Grissom in 2022, no matter how well he was performing in the minors. Instead, Grissom’s strong performance there forced Atlanta’s hand and they promoted him to the majors last week. It’s a paltry five-game sample but he has been spectacular, showing the power/speed combo that made him such an enticing proposition as a prospect. Albies will be back soon, so the question is how much time will Grissom be able to find on a stacked Atlanta squad trying to reach the playoffs. If you have the FAAB, you might as well bid aggressively. There won’t be many more opportunities to add a player of this caliber in the next few weeks. If he winds up glued to the bench when Albies returns, move on quickly.

Franmil Reyes $29 ($57, $7)
It would be easy to point fingers at the Guardians for dumping Reyes, but to be fair he was terrible for them this season, despite the nine home runs in 280 PA. He was also solid for them in 2020-2021, mashing 40 home runs in 707 PA with a respectable batting average. Maybe he is toast, but the Cubs are going to give him an honest shot at playing time and given that they’re in a retooling mode he should get plenty of at-bats. He might do nothing but if he hits a few home runs down the stretch it shouldn’t surprise anyone. He’s outfield-eligible now in nearly every format.

Joey Meneses $21 ($121, $1)
Meneses was a minor-league lifer who didn’t discover his power stroke until the ripe “old” age of 26 (in 2018) when he was briefly in the Phillies system. He bounced around between Japan and Mexico in 2019-2020 and found his way back to the states in 2021. He still didn’t look like he was going to do much of anything – despite a ridiculously great line for the Nationals in the minors – but the Juan Soto/Josh Bell trade opened a job at first base. Meneses is absolutely crushing it, with five home runs in 38 PA. The league will catch up, the book will get out on him, etc., etc., but ride this wave if you’re corner deficient and need the power.

Eduardo Rodriguez $20 ($77, $1)
Rodriguez has been out of commission since May 18, when he was placed on the IL with a rib injury. He was then placed on the restricted list for personal reasons in mid-June and is back on another rehab assignment to get back into playing shape. The numbers in his last rehab outing were stellar (five scoreless innings, one hit, six strikeouts) but the velocity was way down. He is supposed to get at least two more rehab starts before he returns to the Tigers, which means he won’t be back this week. If he stays on turn, the earliest he’ll return is Friday, August 26 in Texas. He had a 4.38 ERA and 34 strikeouts in 39 innings before he was sidelined. He’s a marginal addition even if everything goes his way.

Paul DeJong $17 ($51, $2)
DeJong returned from the minors in late June and has quietly been on a tear, slashing .292/.376/.646 with three home runs in 56 PA. His batting average will eventually collapse like it always does but he doesn’t need to hit .280 to provide fantasy value. If he can stay in the lineup and knock the occasional ball out of the yard, he’ll be plenty useful to his fantasy managers as part of a solid Cardinals lineup.

Drew Smyly $12 ($41, $2)
Since Smyly came off the IL on July 10 he has performed well, with a 3.54 ERA and 27 strikeouts in 28 innings (six starts). But a lot of that came against two weaker lineups in his last two starts (the Marlins and the Reds) and we’ve seen brief surges of excellence like this from him in the past. He’s a matchup play mostly, so if you want to use him this week in Washington that’s acceptable. The tough thing about arms like this is if your FAAB is limited you’ll need to pick your spots down the stretch and might be better off focusing on two-start arms if you’re chasing wins and/or strikeouts.

Lars Nootbaar $12 ($40, $2)
Nootbaar was great last week, making my blurb about him in last week’s FAAB Review look stupid, but he was a beneficiary of a soft schedule and Coors Field. Juan Yepez is due off the IL soon, which means the Cardinals will most likely move Nootbaar back to a bench role. He’s fine to use in weeks where the Cardinals are facing a lot of righties, but I’d rather let someone else pay for his recent past and find a hitter more likely to get regular reps instead.

Manuel Margot $10 ($31, $1)
On Saturday Margot’s rehab assignment was moved to Triple-A. He’s penciled in to re-join the Rays on Saturday, August 20, which makes this move a bit of a stash, particularly in leagues with weekly lineup moves only. This doesn’t mean you shouldn’t add Margot if you can: He is a sneaky source of power and speed who is particularly useful against lefties, but offers enough defense that he should play every day when he’s good to go.

Elehuris Montero $10 ($27, $1)
Montero’s raw numbers have been fine, but his BB/K rate is terrible and his slightly-above-average AVG is fueled by an obscenely high BABIP. This doesn’t mean he can’t keep it up and provide solid counting stats the rest of the way but it’s more likely he will eventually be exposed and struggle, particularly if he keeps walking at a one percent clip.

JP Sears $9 ($22, $1)
Sears was projected a fifth starter/swing type entering the season but has been solid across eight outings for the Yankees and Athletics, albeit with a low strikeout rate. He is a command pitcher whose stuff is just OK but worth keeping an eye on because the A’s have succeeded with making the most out of arms like this in the past.

Predictably, one week after the final NL-to-AL players were reshuffled post-trade deadline it was relatively quiet in Tout AL. Bradish, Bubic, and Sears are the sorts of pitchers I’m reluctant to roster in mixed leagues who are virtually must haves in AL-only. Of the trio I like Sears most if I’m hoping for rate stats and Bradish if I need to make a wins play. My confidence in all three is low, but we’ve reached the part of the season where some fantasy teams need to start mixing sports metaphors and tossing a few Hail Marys.

Catchers in a two-catcher, mono league are next to impossible to find so it was slightly surprising to see Mejia and Maldonado available. This is an OBP league so the penalty in this category explains to some degree why both these backstops were free agents, but I’d be willing to take the hit in that category for the playing time and the counting stats. With 12 home runs, Maldonado has been a sneaky good source of power relative to his positional peers.

I talked about Grissom, Meneses, and Reyes above in the TGFBI section of this article.

Rivera was a part of an under-the-radar deadline move, going from the Royals to the Diamondbacks for Luke Weaver on August 1. He discovered his power stroke in the minors in 2021 and is finally showing that power in the majors. Two of those home runs came at Coors Field on Saturday, but Rivera could still be a sneaky source of home runs at a thin fantasy position down the stretch.

Since August 1 the leader in saves in Milwaukee isn’t Devin Williams but Matt Bush. It’s a 2-to-1 lead, so don’t start making those late career Rollie Fingers comparisons just yet, but at the very least Bush could see just as many saves as Williams to close out the season. He’s a marginal pickup in mixed but in mono leagues like this one he should be scooped up. Two to four saves could make all the difference.