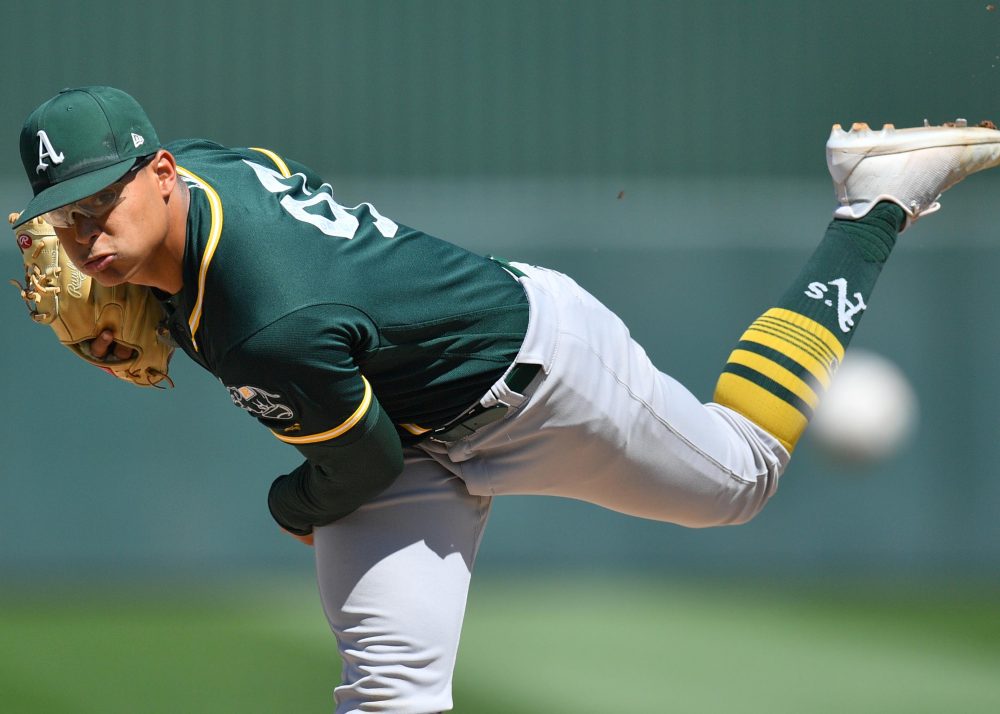 With the Futures Game rosters being announced, the Baseball Prospectus Prospect Team will bring you notes on each of the players in the game so you may acquaint yourself with them before watching them on Sunday. You’ll note that the focus is on guys outside the Top 50 from our Top 101, as well as guys who didn’t rank there at all before the season. This is because we tend to cover the top prospects the most, and figure you’re more familiar with them. If you need some notes on someone we didn’t cover, feel free to drop a comment and we’ll make sure to get you up to date. The Team USA preview will be coming tomorrow, and several prospect team members will be present for the Futures Game on Sunday, so we’ll follow with notes and other observations next week. —Craig Goldstein

The Guys You Know

Enyel De Los Santos (scheduled to start today for the Phillies, so we have a full write-up on him here.)

The Guys You Don’t

Jorge Guzman, RHP, Miami Marlins (High-A Jupiter)
Guzman was made for this kind of showcase, as the radar gun readings with likely rival the heat index at game time in the D.C swamp. There’s a slider that flashes here as well, but he’s struggled to throw strikes and hasn’t missed as many bats as you’d expect in his first taste of full-season ball. —JP

Yoan Lopez, RHP, Arizona Diamondbacks (Double-A Jackson)
Lopez returned to the radar with a vengeance last year, pumping high-90s cheddar past every other hitter he faced, and this year’s been more of the same at Double-A. —WK

Kieran Lovegrove, RHP, Cleveland Indians (Double-A Akron)
Once an intriguing rotation prospect, Lovegrove has found a home in the bullpen, and has excelled in his first taste of Double-A. He attacks hitters with a mid-90s fastball that can push higher, and keeps batters on their toes with an average slider. —CG

Bryan Mata, RHP, Boston Red Sox (High-A Salem)
Mata’s 56 strikeouts in 66 High-A inning are okaaaay, but his 55 walks are…not so much. The 19-year-old Venezuelan is a big ball of projection and unbridled fastball movement. —WK

Jesus Tinoco, RHP, Colorado Rockies (Double-A Hartford)
Tinoco has been unable to replicate his High-A success of a year ago in the Eastern League, where he’s been lit up like a Christmas tree to the tune of 17 dingers in 17 starts. He’ll sit mid-90s with flashes of a swing-and-miss hook on the good days when he looks like a potential middle reliever. —WK

Alex Wells, LHP, Baltimore Orioles (High-A Frederick)
The dictionary definition of “polished lefty,” Wells ticks all the boxes—good command to both sides of the plate with an upper-80s fastball, a solid change he’s comfortable throwing whenever, and not a ton of projection. But who needs stuff when you’re left-handed? —JP

Randy Arozarena, OF, St. Louis Cardinals (Triple-A Memphis)
Arozarena fits the “Cardinals Devil Magic” mold to a T. He’s got spark in the field and at the plate. He has a quick bat, athleticism, and can play anywhere in a pinch. The Cuban, while small in stature, has juice and a high baseball IQ, and will provide “wow”-generating glovework in the process. —JB

The Guys You Will

Keibert Ruiz, C, Los Angeles Dodgers (Double-A Tulsa, No. 54 on Top 101)
Ruiz is a rarity among prospects as a 19-year-old catcher in Double-A. The switch-hitter has an advanced feel for hitting and in the mental and footwork aspects of catching. While he needs work on his receiving consistency and tone down the aggressiveness at the plate, the young catcher should continue to grow into his projection as a solid regular on offense and defense. —KC

Jesus Sanchez, OF, Tampa Bay Rays (High-A Charlotte, No. 60 on Top 101)
Sanchez is enjoying a fine follow-up to a breakout campaign, coming close to replicating his Midwest League production in the pitcher-friendly Florida State League. He’ll show you all five tools, though he doesn’t project as elite in any of them. His best shot at a plus grade is the hit tool thanks to his bat control and advanced approach. He makes consistently hard contact, but it’s more of the line-drive variety at present. As he begins to fill out his frame, and perhaps add more loft, those could turn into home runs. —CG

Heliot Ramos, OF, San Francisco Giants (Low-A Augusta, No. 61 on Top 101)
Ramos is experiencing the trials of an 18-year-old in the South Atlantic League and has so far been a polarizing report for scouts. He flashes the talent that made him a high pick with a feel to find the barrel and use the field with backspin line drives along with the athleticism to stay in center field. At the same time, his approach is very raw and it’s going to be a level-by-level process with the question of whether his physical abilities will turn into enough on-field tools to become an everyday major leaguer. He oozes physicality and a feel for the game, and that tends to play in the upper levels. —DL

Yusniel Diaz, OF, Los Angeles Dodgers (Double-A Tulsa, No. 73 on Top 101)
Diaz has one of the most discerning eyes and approaches that you will find in the Texas league despite being just 21 years old. In addition Diaz works with plus bat speed, quality hand-eye, and solid quick twitch to go with average raw power that the swing doesn’t quite tap into completely. Overall he should be a boon to any offense as a plus on-base focused hitter even though his future is likely as an above-average defender in right field —KC

Luis Urias, SS, San Diego Padres (Triple-A El Paso, No. 74 on Top 101)
Urias is one of the most impressive hitters to come through the Texas League in the past half-decade despite lacking size and explosive strength. There are very few players that can boast the combination of hand eye and zone control abilities that Urias possesses and it should allow him to be a tremendous positive in any lineup. Urias lacks tremendous range at second base, but his fancy glovework should allow him to be an average defender there and allow his bat to carry his profile as an above average regular. —KC

Seuly Matias, OF, Kansas City Royals (Low-A Lexington, No. 75 on the Top 101)
Matias is already approaching 30 home runs and has the most in the minor leagues, yet he has an on-base percentage hovering around .300. That sums up the slugging 19-year-old in a nutshell. He has eye-popping raw power and bat speed but a very raw approach that generates a lot of swing-and-miss. There’s a lot to like with the light-tower power and strong frame, but he has a ways to go with the approach. —DL

Andres Gimenez, SS, New York Mets (High-A St. Lucie, No. 82 on Top 101)
The Mets love their polished Venezuelan middle infield IFAs, and Gimenez has easily been their biggest hit with that profile to date. There’s nothing outstanding on the scouting sheet, but Gimenez does everything well and has added a bit of pop as a 19-year-old in a difficult offensive environment. He’s improved at the 6 as well, is an above-average runner, and generally the profile just outpaces the sum of the tools. —JP

Jesus Luzardo, LHP, Oakland Athletics (Double-A Midland, No. 88 on Top 101)
Luzardo’s prospect ranking is going to shoot up after an impressive season split between High-A and Double-A so far in 2018. Luzardo consistently sits around 94 with plus arm-side life that he can locate corner to corner and up or down. He also features a plus changeup with deception, tumble, and arm-side fade that regularly induces whiffs or weak contact. If command, velocity, and a quality off-speed pitcher weren’t already enough; Luzardo has a curveball that regularly flashes plus to complete the arsenal. The 20-year-old combines polish with raw stuff that give him a good chance as a no. 2 or 3 starter at the major-league level. —KC

Luis Alexander Basabe, OF, Chicago White Sox (Double-A Birmingham)
The nominally taller twin brother looked the part of a potential five-tool monster following a breakout campaign in the Sally back in 2016, but lingers skepticism about the hit tool appeared validated after a rough 2017 campaign. He’s been more bad than good this season at Double A, though there remain a lot of rough edges to his game. —WK

Lewis Thorpe, LHP, Minnesota Twins (Double-A Chattanooga)
The Aussie snuck onto his first #BP101 way back in 2014, but a complicated recovery from Tommy John surgery derailed his development for two full seasons. After dipping his toes back into competitive waters last year he’s been downright electric at points in a gloves-further-off campaign at Double-A this year, striking out 104 batters in 82-plus innings with a deep four-pitch arsenal. The fine command’s still winding its way back, and he’s been hittable at points. But it’s safe to say he’s reemerged as one of the more exciting arms in a sneaky-deep Twins system. —WK

Miguel Amaya, C, Chicago Cubs (Low-A South Bend)
Amaya has been the breakout prospect for the Cubs this year. Still a teenager, the Panamanian has developed a power stroke, hitting 11 home runs at South Bend. He’s raw behind the plate, but he has a strong arm and the physical ability to stick at catcher. —NG

Dawel Lugo, MI, Detroit Tigers (Triple-A Toledo)
A principal in Detroit’s return from the Snakes for J.D. Martinez, Lugo has struggled to hang with upper-minors pitching beyond an empty batting average. It’s a tough profile, as he lacks for a true defensive home on the dirt, and there isn’t a ton of power or speed to carry the profile either. —WK

Yordan Alvarez, OF/1B, Houston Astros (Triple-A Fresno)
Alvarez has missed a bunch of time with assorted maladies over the past couple seasons, but when healthy the giant Cuban has quickly consolidated consensus as one of the better hit-and-power prospects in baseball. He’s also surprisingly athletic for a man his size, to where it continues to look feasible that he can play a not-embarrassing left field in the majors. —WK

Luis Garcia, SS, Washington Nationals (High-A Potomac)
Just 18 years old, Garcia played well enough at Hagerstown to allow the aggressive Nationals player development staff to challenge him with an assignment to High-A Potomac. The gifted infielder should be able to stick at short over the long haul, and has enough stick to potentially hit at the top of a lineup one day. The likelihood is still a down order hitter, but he makes a bunch of contact and is strong enough to keep the bat in his hands when challenged. He’s so good at making contact that it can be a bit of a detriment to his plate approach, but that’s the kind of thing a challenging promotion is good to grind out of a talented prospect. —CG